Engineers warn it could take weeks to repair Auckland's damaged Harbour Bridge, leaving motorists in the almost 200,000 cars that commute across it daily facing lengthy delays.

The Waka Kotahi NZ Transport Agency has even called on commuters to consider working from home if possible after motorists endured a day of chaos because of lane closures on the bridge.

The drama started when a southbound truck carrying a shipping container was blown sideways on Friday morning by wind gusting up to 127km/h.

"The truck striking the bridge has damaged the superstructure, with a steel upright sheared off," NZTA's senior journey manager Neil Walker said.

Incredibly, the truck righted itself and its driver was able to drive away. 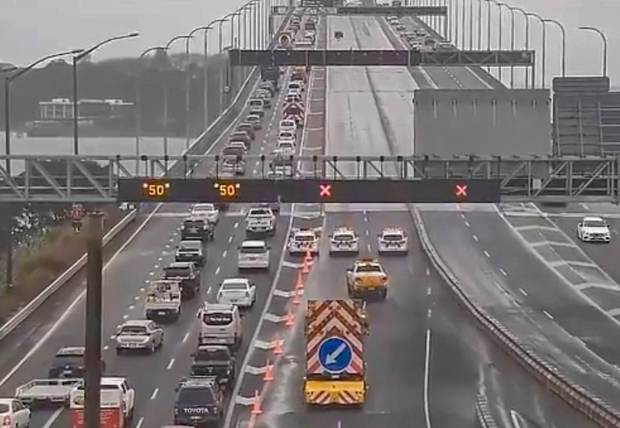 However, another "medium-sized" truck heading north was also caught in the freak wind gusts and blown across two lanes of traffic in a frightening incident before toppling onto a movable barrier where it remained stuck.

Emergency teams initially closed all bridge lanes heading to the North Shore as they rushed to clear the stricken truck.

The accidents meant Auckland's roads and public transport network descended into chaos as traffic banked up for kilometres along the city's Northern and Northwestern motorways.

Motorists attempting to make their way home to the west and north of the city reported being stuck in traffic for hours. 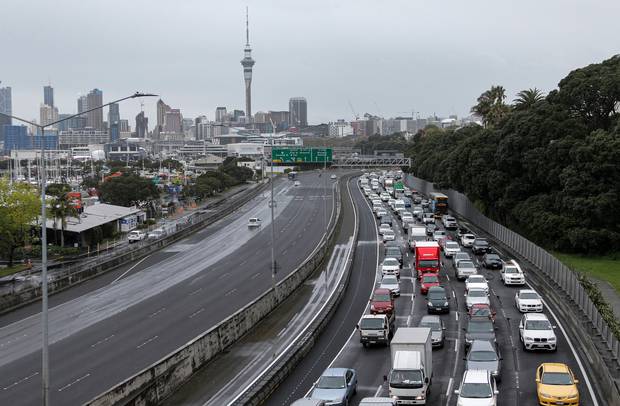 Northbound traffic brought to a halt by a truck crash on the Auckland Harbour bridge. Photo / Alex Burton

Auckland Mayor Phil Goff said NZTA gave his team an early report on the bridge damage, reporting that the middle four lanes could remain closed for an "extended period".

NZTA would make a decision about the best way to fix the bridge on Sunday, Goff said.

NZTA's Walker said engineers' first assessment of the bridge's structural damage had indicated "a permanent fix would be a long-term process".

"The four lanes across the centre span of the bridge will remain closed to traffic for at least several days and potentially weeks," he said.

"Congestion on the road network is inevitable as we assess the damage and the necessary repairs."

Waka Kotahi recommended Aucklanders consider working from home instead of attempting to cross the bridge if possible.

The agency also recommended using public transport as the bridge's two outer "clip-on" lanes in each direction would still be open, meaning the Northern Busway could operate unaffected.

The outer lanes were safe to use as they had their own supporting structure.

"If you do need to travel, motorists are urged to use the Western Ring Route (SH20, SH16 and SH18) around the harbour," NZTA said.

On average, more than 170,000 vehicles cross the bridge on weekdays. Its eight lanes are changed four times a day into different configurations to adjust to peak-time traffic flows.

The bridge opened in 1959 with four lanes, but these quickly proved not enough. Two clip-on structures were added by 1969, providing two more lanes in either direction.