The families of two New Zealanders brutally murdered in Uganda are reportedly horrified after finding out that Australia resettled the killers in a secret deal with the US.

Kiwis Michelle Strathern and Rhonda Avis were brutally slain in Uganda in 1999 while gorilla-watching in the rainforest.

At the time, six other people, including two Americans, were also killed.

Three Rwandans confessed to the murders and were sent to the US where they would face trial.

However, an American judge ruled the men had been tortured during the Rwandan Civil War and the case against them did not proceed. Instead, the men, who did not want to return to Uganda but could not legally stay in the US, have been on a limbo since then.

Now, Politico has reported that two of those men have been resettled in Australia, following a secret deal between the country and the US.

The men reportedly settled in Australia last November as part of a deal that saw the US also take in refugees being held in Australia's refugee centres.

According to Politico, Australia had to take refugees from Costa Rica camps as part of the deal with the US but the two Rwandans were part of a separate, secret arrangement. 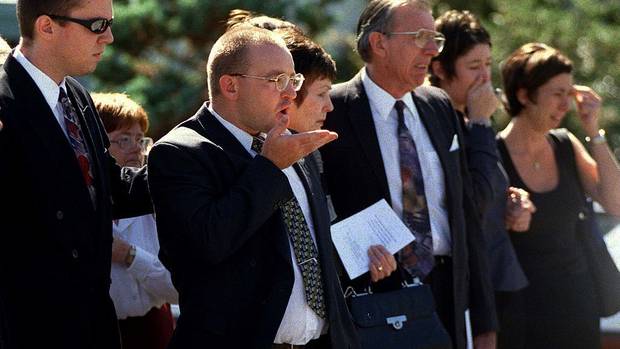 Mark Avis gives a farewell kiss to his late wife Rhonda Avis who was killed in Uganda by Hutu Militia rebels while they were on a gorilla trek in the Bwindi National Park. Photo / Getty Images

Leonidas Bimenyimana and Gregoire Nyaminani were accepted by Australia in November as humanitarian migrants at the request of the US.

Michelle's mother, Jean Strathern, told Politico she was horrified by the news.

"It makes shivers run down your spine. They're only two, three hours away on a plane," she said.

Pauline Jackson, Rhonda's mother, said it was a shock for the family to find out the murderers had ended up being accepted by Australia and were living so close to the family.

Australian and American officials approached by Politico refused to comment on the deal.