When Lynne Ogilvie started work at KFC in Rotorua 43 years ago, she was paid $2.47 an hour.

As the decades ticked by, not once did she think about leaving.

But at the age of 71, the familiar face at the Amohau St restaurant has decided she's cooked her last quarter pack and is looking forward to a quieter life.

It was Ogilvie's last day at KFC on Monday and she admits she is leaving with some sadness. 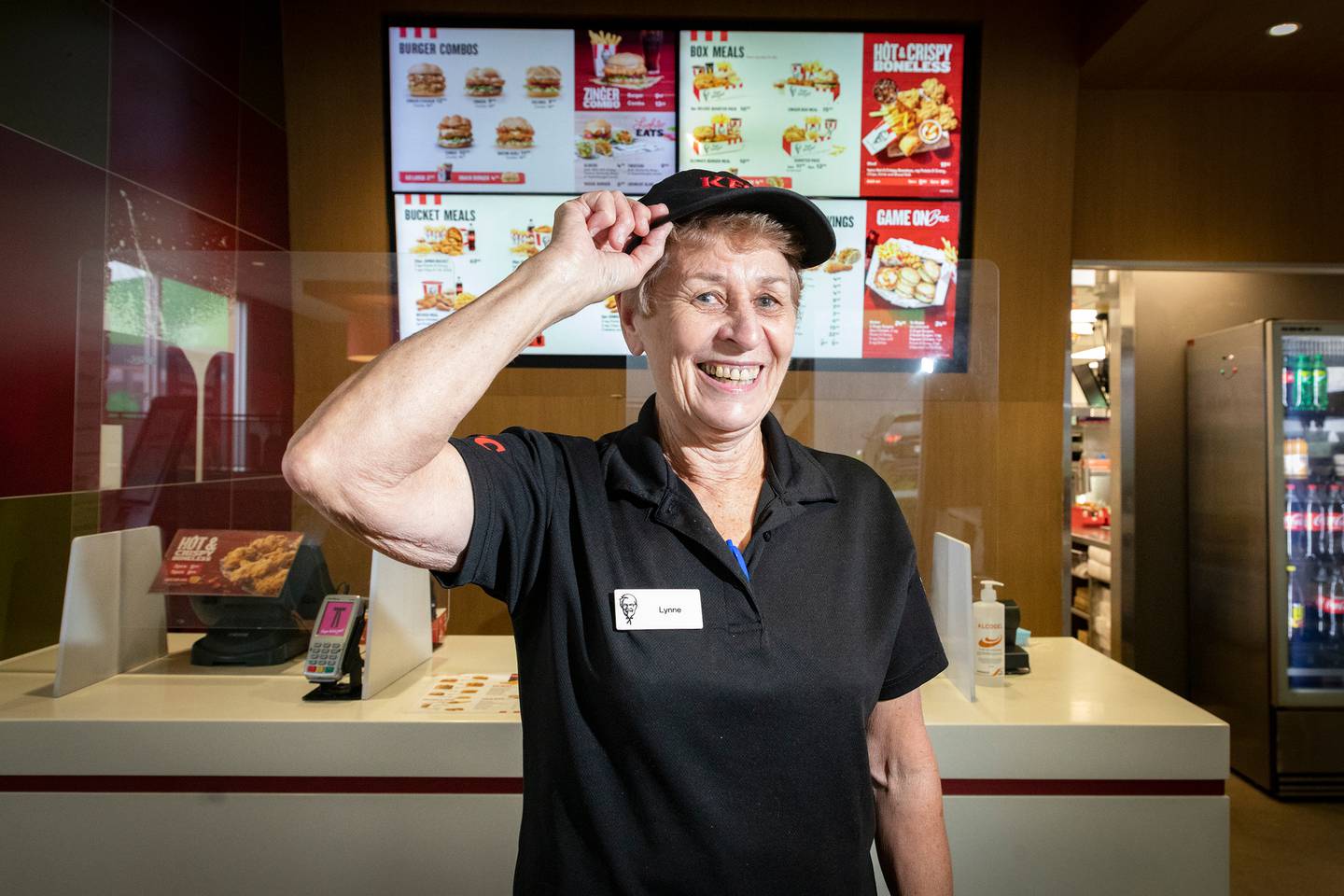 Lynne Ogilvie retired from her job working at KFC for 43 years this week. Photo / Andrew Warner

Ogilvie was 28 when she applied for a part-time job at KFC's Amohau St site.

"We needed money. We had a mortgage and two children and in those days it was hard to get a job. I went around everywhere and I ended up getting five jobs so I did five jobs."

KFC was a part-time job and she worked full-time as a night porter at Four Canoes Hotel.

"I used to wake up in the morning and think to myself 'where am I meant to be today?'".

At KFC, she quickly earned the respect of her bosses and was offered a full-time job.

The early KFC days were very different. There were no restaurants and drive-thrus but small "hatch stores". There were no computers to check orders either.

"We used to have to speak on a mic and all the orders were done by memory."

"We were presented with a golden bucket. I was really rapt to get that."

It is her work ethic that's seen her praised by not only her work colleagues but also her customers.

KFC regular Darren Brown said he considered himself a friend and a customer after four generations of his family had been served by Ogilvie.

He said he had vivid memories as a child of seeing her working outside the KFC store washing the walls and windows.

He said she was a perfect example of commitment and dedication to serving the local community.

"I guess you can say over 43 years she's grown close to the hearts of the Rotorua community but even closer to our stomachs." 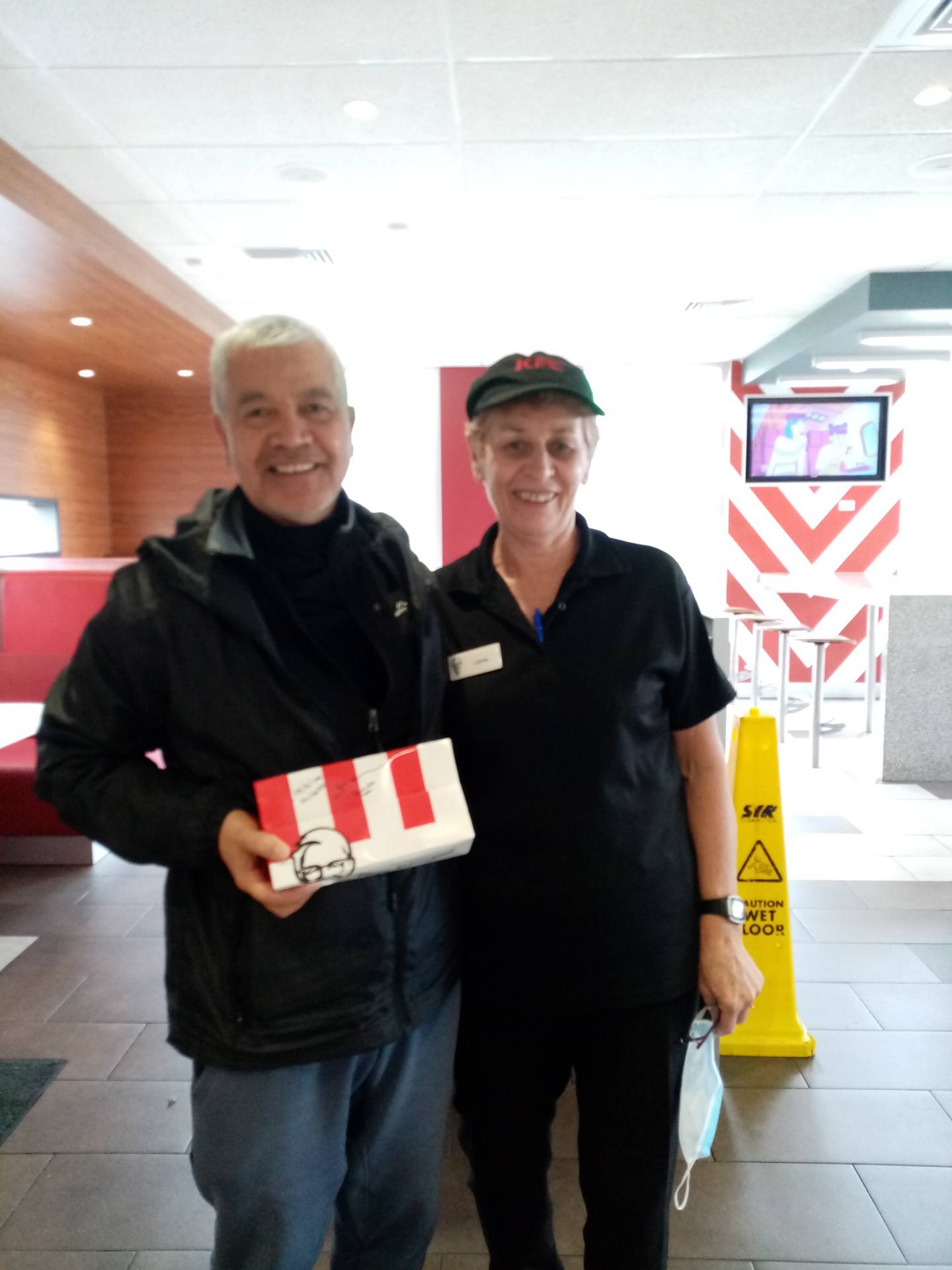 Darren Brown got KFC worker of 43 years Lynne Ogilvie to sign his quarter pack on her last day of work. Photo / Supplied

He said he had the pleasure of being at KFC for her final shift on Monday and got her to sign his quarter pack as a memento.

Ogilvie said she had been approached by management over the years to
"climb the ladder" but she was always just happy to do her shift and go home.

Despite the grumbles from the odd customer when there was a wait for chicken or missing corn cob, she said she loved every minute of her job - including keeping the carpark and gardens tidy.

She's enjoyed the journey she's taken with customers - some of which she quietly confesses are daily visitors.

"I've seen them in their courting days, then they get married, then they have some kids and then some of them might have separated. I've seen it all. I'm sad in a way to leave but it is time."

She said KFC had groomed some incredible young talent who had gone on to achieve wonderful things.

"If you want to work, you can do it. I see the young kids today, they turn up and some don't turn up. If you have that person missing in the chain, it makes it harder for the rest of the team."

She said there shouldn't be unemployment in New Zealand as she believed the work was there if you wanted it.

"It's a good feeling when you get your work done and orders away and you make people happy ... I've always appreciated my job. I used to thank my shift manager after every shift."

But for now, Lynne has decided to give herself a four-day weekend for the first time in decades and will spend the other three days a week working for her daughter and helping with her grandchildren.

And the burning question. After all this time, does she still like eating KFC? It seems the answer is a definite yes.

"When you work a shift, you're allowed a free meal and I always get the rib piece and chips."

"We are so proud of Lynne and are honoured to have been part of her journey over the past four decades.

"Her tireless passion, loyalty and commitment to KFC, particularly in the Rotorua community, will always be held in high regard within our business.

"The Colonel would be proud."