Vodafone NZ has switched on its 5G service at 100 sites in parts of Auckland, Wellington, Christchurch and Queenstown - making it the first of the three big phone companies to offer the faster new technology to its mobile users.

The carrier also has 20 5G "cows" (cell sites on wheels) that will be deployed to holiday hotspots and events over the summer.

All Vodafone plans are now 5G-enabled for free - although a $10 premium will be charged for the service from June.

And Vodafone does recommend an unlimited data plan or one with a high data cap - because 5G's ability to download a high-def movie in seconds also means a modest monthly data limit can be obliterated in moments.

You'll also need a phone that supports 5G. Options are narrow and expensive, for now. There's the 5G version Samsung's Galaxy A90 (a robust $1399 if you pay upfront) or the 5G version of the Note 10+ ($2199). Apple is expected to add 5G to its iPhone line next year. Huawei has 5G models, but so far none are onboard for Vodafone NZ 5G. Some new phones, such as Samsung's new Galaxy Fold come in a 5G version but, for now, NZ is only getting the 4G (fourth generation) variant. It'll take a couple of years for 5G support to filter down the foodchain to cheaper models.

And you'll need to be inside one of the 5G areas, too. See a coverage map here.

To address the "who needs it now?" question, a launch event in Wellington this morning saw Vodafone reiterate that it has secured several blue-chip early customers who are sold on 5G's extra bandwidth, lower latency (or lag), and superior security and ability to deliver a focused signal: NZ Police, BNZ, Auckland's Rescue Helicopter and Waste Management. 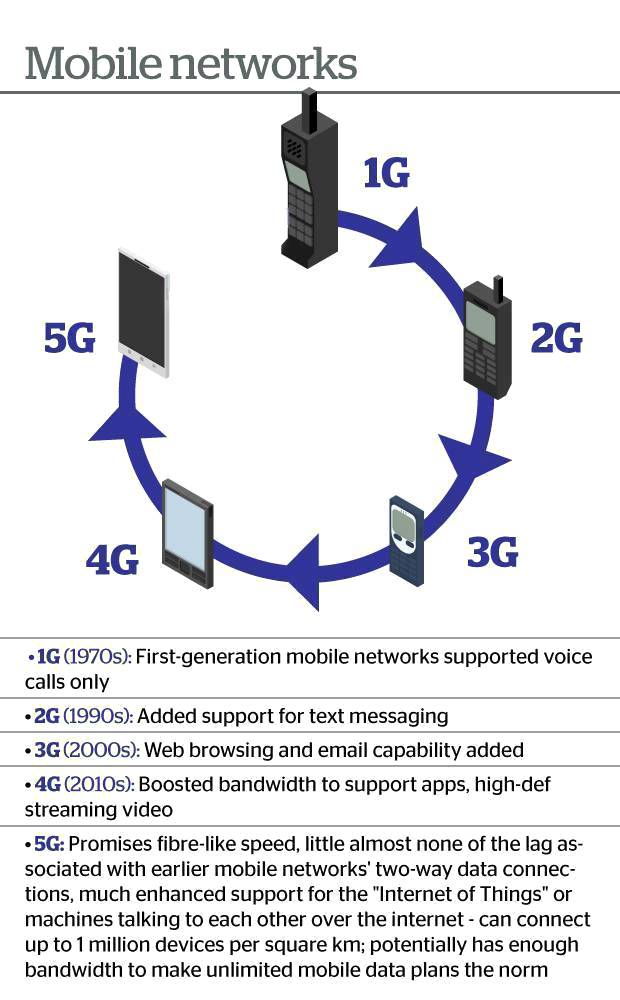 Police chief information officer Rob Cochrane showed off a 5G-enabled drone that can take 4K (or ultra high definition) quality video and feed it back instantly to an officer on the ground.

"5G technology will really help us keep New Zealanders safe. While drone footage over a 4G connection is useful, with a 5G network connection the quality improves dramatically meaning we can scan the environment allowing a faster response to keep the community safe," Cochrane said.

Although there's no timetable for deployment at this point, he sees 5G's faster response times allowing for 3D mapping of crash scenes to get traffic moving faster, and for heatmapping of crime scenes - essentially serving as a much cheaper version of the police helicopter (and a much quieter version, for the beleaguered ears of central Auckland residents).

Its chief technology officer, Jourdan Templeton, explained: "We've developed a plug-and-play retail optimisation solution that gives business owners a heat map of how people are interacting with products in their stores. While some of this you can do this over 4G, it now becomes cost-effective with 5G due to the ability to use cloud-based storage enabled by the higher network capacity and greater processing speeds."

Over the next two to three years, Vodafone NZ plans to have 1500 cell sites upgraded to 5G, giving some 94 per cent of the population access to the faster, more capable mobile technology.

At the Wellington launch event, Vodafone technology director Tony Baird promised 10 times the speed of today's 4G mobile networks - or the ability to download a whole Netflix series in minutes. 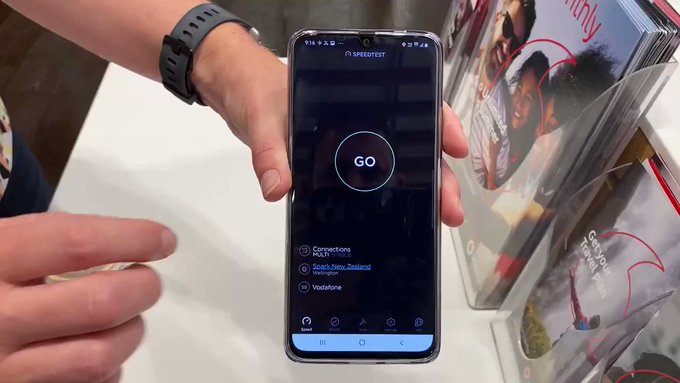 In trials, there have been download speeds in excess of 300 megabits per second, or three times the bandwidth that most people get from a UFB fibre landline - which is in itself nothing to sniff at.

But Baird also cautioned that "to reach the one gigabit [1000 megabit per second] speeds that we're seeing internationally, we'll need approximately 100MHz of 3.5GHz spectrum so will continue to work with the government on the early allocation and auction processes". 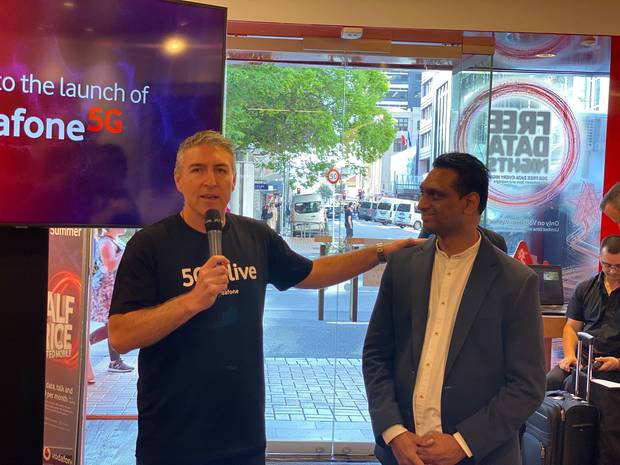 Vodafone NZ is the only telco with a substantial chunk of 5G-friendly 3.5GHz spectrum, obtained via a 58MHz chunk it secured when it bought TelstraClear.

Communications Minister Kris Faafoi is currently grappling with a Treaty claim that is holding up a 5G auction, but it is likely that Vodafone, Spark and 2degrees will get temporary licences to plug the gap.

Spark is aiming to offer its first mobile 5G service from June next year.

Last month, Spark gained bragging rights for offering the first 5G service of any kind as it launched "fixed-wireless" 5G service in a number of small South Island towns (Westport, Clyde, Twizel, Tekapo and Hokitika) from $75 per month. Fixed-wireless sees a mobile network used to deliver broadband into a defined area - usually the boundaries of a home or workplace - functioning as a substitute for landline broadband.

The modest nature of Spark's fixed-wireless rollout earned it a light-hearted jibe from Vodafone NZ boss Jason Paris, who tweeted, "Awesome to see @SparkNZ arrive at the @vodafoneNZ 5G party, even if they have turned up with a bottle of Marque Vue". 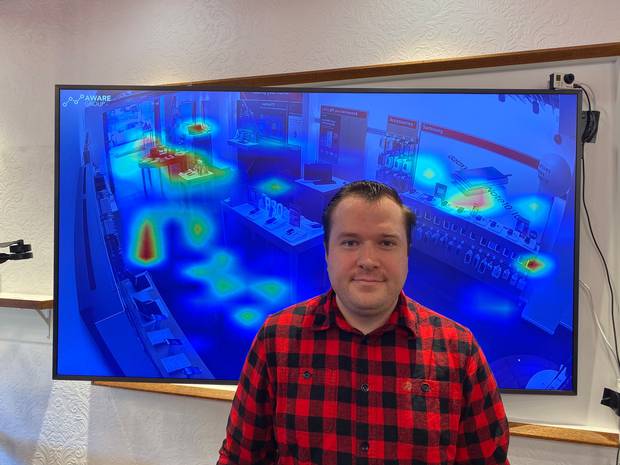 Aware Group CTO Jourdan Templeton demos a system for tracking (anonymised) customer movements around a store. The same could be done with fibre, but 5G makes it cheaper and more flexible.

Vodafone did not launch any fixed-wireless 5G plans today, but is expected to soon.

Paris has already flagged that fixed wireless will be a huge point of focus for his company over the next couple of years as it looks to move around a quarter of its 420,000 or so landline customers on the technology.

The past week has seen Vodafone offer visitors to Wellington Airport a whirl on fixed-wireless 5G.

Fixed-wireless has so far been used by Spark and Vodafone in the home market.

Vodafone NZ technology director Tony Baird says his company is aiming to get around 25 per cent of its customers on to fixed-wireless over the next two to three years. Photo / Jason Oxenham

But Vodafone's Baird says that once more spectrum comes on tap and 1 gigabit per second-plus speeds are possible, fixed wireless will also be offered to business - with its plentiful bandwidth making Wi-Fi redundant.

Beyond its raw speed, Vodafone and other carriers are also touting 5G's superior network smarts, which give it a superior ability to wrangle millions of gadgets in the "Internet of Things" and its near-imperceptible latency (or lag) on a two-way connection - eliminating one of fibre's key advantages.

Baird says low-latency is good for everything from cloud gaming at home to video-conferencing at work. Vodafone is also touting 5G's low-latency for uses from remote surgery to remote-control of heavy construction gear.

The Finnish company was Vodafone NZ's primary technology partner with its 4G upgrade and Paris said from the get-go that it would have his company's 5G business too.

Elsewhere, 2degrees is using Huawei for the core (or brains) of its 4G network, plus the RAN (radio access network or cell site) element, while Spark is using Cisco and Ericsson for its 4G core plus Huawei for its RAN.

2degrees has yet to set a timetable for its 5G upgrade. New chief executive Mark Aue recently told the Herald he thought 4G offered all the bandwidth people would need for several years to come.

With Huawei sidelined by the GCSB, Spark turned to Nokia Networks for its recently launched fixed-wireless 5G service in the South Island. Spark also confirmed rumours that it had added Samsung to its mix of preferred partners as it follows what it calls a "multi-vendor" approach.

Last week, Spark's officers were picketed by a couple of dozen anti-5G protesters.

The Prime Minister's Chief Science Advisor, Professor Juliet Gerrard, has addressed urban myths and misinformation about 5G with a plain-English Q&A about the new mobile technology.