Air New Zealand chief executive Greg Foran has warned more jobs could go at the airline on top of the 4000 already lost.

In a message to staff, he has outlined a plan to rebuild the airline to ''healthy profits'' by August 2022.

''Make no mistake this is going to be a hard journey as we create our own playbook for the airline to emerge even better than before,'' he said.

He has outlined a three-step programme - ''Survive, Revive and Thrive'' which over the next 800 days is aimed at getting the airline back to ''healthy profits'' even though it may be only 70 per cent the size it is today.

But Air New Zealand staff say they are dismayed and angered at the company's announcement to cut a further $150 million from their wage bill.

E tū head of aviation Savage said with initial labour cost reductions of around $370 million, cuts of a further $150m will only increase the pain for the airline's workers.

"Thousands of workers have only got several weeks of work left before being made redundant.

"The company is heavily focused on saving money and is in danger of being blinded to the importance of treating both employees and customers with respect," Savage says.

Savage says the real danger now is that the company may look to use the threat of outsourcing work to downgrade the remaining jobs.

"We will meet with union members as soon as possible to find out in detail how they want to respond. They have lost trust in senior management because of the way they were treated in the first round.

"The company is facing a big challenge, but now is not the time to repeat their past mistakes. To rebuild better, we need to keep these vital workers in jobs."

He said the Survive part of the plan would run until the end of August this year.

''We have to cut costs across the business and already, we have sadly said farewell to 4000 Air New Zealanders. Our wage bill is down by a third now but our revenue has fallen by more than two thirds. We need to balance the scales further.''

Foran said staff needed to brace themselves for more discussions around cost savings.

This could mean more leave without pay, reduced hours, job share, voluntary exits with redundancies ''as the last option'.'

He said: ''I am really sorry we are in a situation of needing to reduce our wages bills further, but I believe this is what we need to do with some urgency to get through the Survive phase.''

E tū's Savage says the real danger now is that the company may look to use the threat of outsourcing work to downgrade the remaining jobs.

"We will meet with union members as soon as possible to find out in detail how they want to respond. They have lost trust in senior management because of the way they were treated in the first round.''

Foran said already it had grounded its 777 fleet, deferred expenditure on new aircraft, hangars and parking; made savings in its supply chain and leases for aircraft; executive roles have been lost and savings made on office space and company vehicles.

''Today, we start Phase 2 to remove around $150 million additional from our wages bill as part of a suite of other changes to our cost base to put Air New Zealand in the shape to be able to meet our 800-day ambition for August 2022.''

Air New Zealand revenue had evaporated from $6 billion last year to almost nothing for a couple of months.

Revenue would slowly return but in the next financial year, it is likely to be less than half what it used to earn.

''The good news is that Air New Zealand could be more profitable in the future than before, allowing us to start reinvesting in our customer experience, to share the rewards with Air New Zealanders via consistent profit share bonuses and to distribute dividends to our shareholders.''

He said the airline would be into the Revive section on September 1, if it had completed the Survive platform and reduced its cost base to match the much smaller business it was compared to pre-Covid-19.

''We are also hopeful that around this time the nation will well and truly have returned to level 1 and that Tasman and Pacific Island flying could be returning for leisure and business travellers,'' he said.

However, it was not factoring a return to long haul flying of any note until next year.

''We believe that until there is a vaccine, effective treatment or elimination of the disease in key markets, the New Zealand Government will not fully open its borders for growth in long haul air travel.''

One glimmer of hope of late has been the extra cargo movements, which were helping the economy and cashflow as well as the ''heartening'' support in domestic travel. 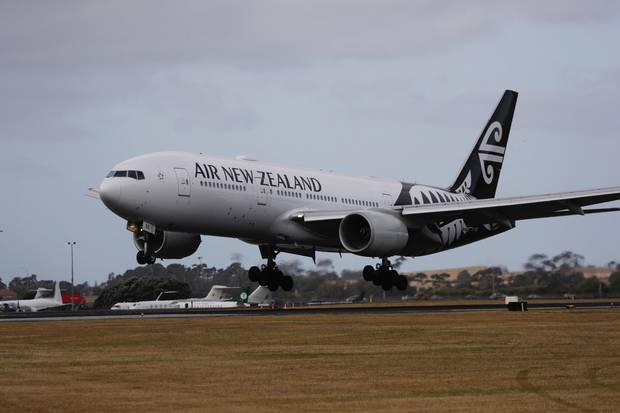 Air NZ's Boeing 777 fleet has been grounded until the end of the year at least. Photo / Dean Purcell

''Nevertheless, the reality is that during our Revive period we will be a much smaller airline, growing gradually as routes open and customer confidence returns. We will use this phase to develop new products and services, while creating innovative ways to encourage Kiwis to travel for business and leisure.''

Digital would be at the core of what it does.

''Air New Zealand's customer experience of tomorrow must mirror that which consumers expect of a leading digital company, otherwise, we will not be relevant and we'll fail to meet our full potential.''

By August 2022 Air NZ would be a digital company that ''monetises through aviation and tourism'' in a sustainable manner.

'As we thrive we will not focus on size, but on quality. We will be smaller, flying fewer routes but we will not change our outstanding reputation for care, compassion and heart.''

The airline, which is now under intense pressure from customers over refunds, had these values which stood it apart, said Foran.

''We will also lead in areas relating to climate change, particularly carbon emissions.''

The Tasman and Pacific Islands offer the best value option for customers.

International would be focused on an excellent product offering and delivery for our business and premium leisure customers.

''Supported by best in class digital products across all fleets, allowing for seamless customer and staff interaction which improves the experience and reduces our costs,'' he said.

''And we owe it to all the Air New Zealanders who have left us through redundancy, or who are on furlough, or who are on reduced hours, to achieve that and to get them back into the airline full time.''

If we fast forward to 2022, our vision is a successful airline that:

• Takes care better than any other airline on earth

• Is operationally efficient and excellent at all we do

• Enables Kiwis to fly again, after all, we are a nation of great explorers

• And is seen as the carrier of the most revered nation on earth in a post-COVID-19 world.

Air NZ last month confirmed it expects to report an underlying loss for the 2020 financial year while estimating hedging losses and aircraft impairments of up to $560 million.

The airline, which has yet to draw on the Government's $900m loan, said on May 26 it was clear that it would take some time for demand to return to the level of business before the Covid crisis.

Air NZ had been building up balance sheet strength over the past five years which had put it in a strong position at the start of the crisis.

But the airline had to quickly shore up its liquidity, first the $900m loan from its half owner, the Government, and through making structural cuts in its fixed costs.

For the second half of the 2020 financial year, Air NZ's network capacity is expected to be around 50 per cent lower than the prior comparative period, driven by a drop of about 90 per cent in the fourth quarter.

In light of this and the fact there was very little revenue coming in during alert levels 3 and 4, the airline is now expecting to report an underlying loss for the 2020 financial year.

It has $640m of short-term liquidity, versus $1 billion prior to the outbreak. That doesn't include the $900m Government loan facility.

In its market update, the company said it would feel the impact of $85m-$105m from fuel hedging de-designation, aircraft impairment charges of $350m-$450m, and reorganisation costs of up to $160m in the full financial year.