Mercury Energy has kept the faith with thousands of its mum and dad investors by eking out an increased final dividend for the June year and predicting another increase in the payout in year ahead.

Drought and disruption from the Covid-19 pandemic helped drive Mercury's operating earnings down by 2 per cent over the year to June, but the company increased its dividend for the 12th year in a row.

Operating earnings, (ebitdaf) of $494 million in the year were down $12m on the previous corresponding period but the company reported a 15.8cps dividend for the year, up 2 per cent on 2019.

Despite uncertainty surrounding the planned closure of the Tiwai Point aluminium smelter and the impact of Covid-19, Mercury forecast ebitdaf of $515m for the 2021 year and a 17 cps dividend for the year.

Grant Swanepoel, director of equity research at Jarden, said the result and earnings outlook reflected the quality of Mercury's mostly North Island assets and the confidence of its board.

"It does show the board's confidence in its assets and its ability to navigate its way through the next few years," Swanepoel said.

"It's the one stock that appears to be the most bullet-proof under changing circumstances," Swanepoel said.

It was Mercury's first full year without earnings from the Metrix smart metering business, which was sold last year. 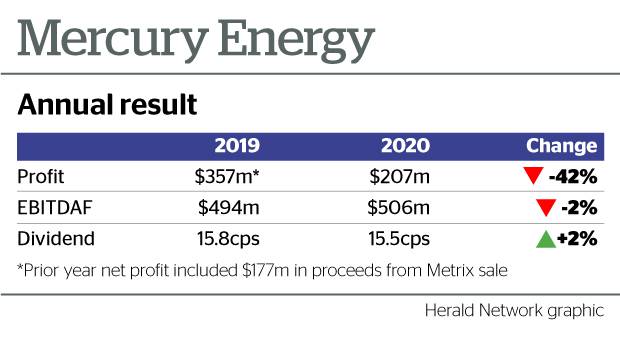 Mercury's net profit after tax of $207m was down by 42 per cent on the previous year's record profit of $357m, which was inflated by the $177m gain on the sale of Metrix.

Adjusting for the sale, Mercury's net profit was up $27m, primarily because lower interest and tax charges more than offset the effects of lower rainfall.

Mercury said its overall performance was strong in a testing financial year affected by drought across the Waikato catchment from September, and then disruption from Covid-19.

The company said in July that it was well placed to respond to Rio Tinto's move to wind-down Tiwai's operations.

Mercury chief executive Vince Hawksworth said the effects of the Covid-19 pandemic on the economy and on customers would "continue to be felt for some time".

He added the announced closure of Tiwai, and decisions around timing of the closure, would lead to increased volatility in wholesale electricity markets.

The closure of the plant - which uses 13 per cent of New Zealand's power - would have transmission pricing implications, and market and investment implications for Mercury and others.

Mercury's renewable generation assets in the North Island are close to load centres and largely free of major transmission constraints.

South Island generators Contact and Meridian are expected to bear the brunt of Tiwai's closure.

Mercury's share price rallied after the result. The stock last traded at $5.03, up 15c.