Ben Stokes was made for the job of leading England to World Cup victory, according to his dad.

But Gerard "Ged" Stokes, the former Kiwi league forward and assistant coach, also questioned whether a brilliant cricket final should have been decided by a Super Over and boundary countback.

Ben Stokes was named man of the match after rescuing England's innings with an unbeaten 84, then finishing the job against New Zealand in a tie-breaking Super Over.

"Being in those situations is the whole reason you play the game, and they come to define your career," said Gerard Stokes from his home in Christchurch, where the family gathered to watch the final played at Lord's.

"If you can handle that situation you are at the top of your powers.

"I think Ben showed a Kiwi attitude in an England side…there is a bit of Kiwi in how he plays, of never giving up."

He told Heather du Plessis-Allan the media and New Zealanders have been very gracious.

"In the way that they've accepted that Ben is a Kiwi and that there is a bit of Kiwi on the cup anyway, so that's the main thing."

He said that the game showed what brings people to sport, and it was one of the greatest cricket games ever played.

"You see something similar in soccer where the team which maybe even deserved to win doesn't necessarily win the shoot out."

Stokes wondered if England and New Zealand could have shared the trophy when the scores were tied after 50 overs.

"I'm not sure about something that important hanging on that," he said, when asked about the Super Over and boundary countback which handed the title to England.

"They could have shared the trophy but that doesn't seem to be how things are done these days."

Stokes said he would always support New Zealand teams and did so again, despite his son playing for England and also knowing many England players such as Joe Root who came up through junior ranks with Ben.

He said the England camp treated the players and their families superbly, and the Stokes family had also been amazed by the support for Ben in New Zealand. Stokes and his wife Deborah moved back to New Zealand in 2013. 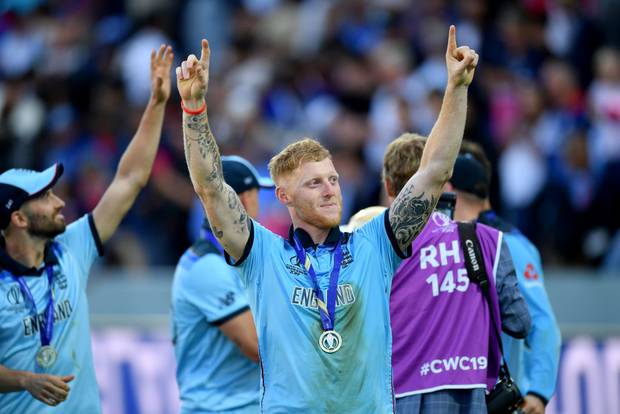 Young Ben was 12 when the family arrived, and his junior cricket years involved endless hours of travel every week from the family's Cumbria home to training sessions and games in Durham.

"I know England better than an Englishman," said Gerard Stokes, about the many car trips.

"I will always support New Zealand but I have that affinity with the England team.

"You could see the desperation and the anguish on all the players faces.

"You knew it was going to lead to ecstasy or complete depression. It was just incredible how so many weeks of matches came down to that.

"I think any sportsman wants to be in those situations.

"It was tailor made for Ben, from what he showed in the whole tournament, with his ability to hang in there. It was about keeping the run rate up, and having a lick at the end.

"That throw which bounced off his bat and went to the boundary…it felt like a bit of karma, it felt like someone was sitting on his shoulder.

"I could only think about how far he has come, from being a boy in a small English village to being man of the match in a World Cup final."