It's a shame Paula Bennett is leaving.

She's good talent, works hard and has good institutional knowledge. You don't want too much of that leaving the building - especially when you're a party trying to rebuild.

But she was robbed of her job and demoted, and she was clearly unhappy about it, so I'm not surprised. Politics is an eat you up, spit you out, business.

It's hard yakka and often thankless tireless work. You get dragged through a lot of muck, you're at the behest of the polls, the public, the other politicians, the agenda is set for you and there's very little control.

Also, it's been her life.

Giving that up is not easy. I remember guest editing an edition of Woman's Day magazine many years ago, and we did a cover with capable Kiwi women of note. Paula Bennett was one of them.

She was full of life and personality and vigour, and carried herself with a real confidence.

She had a tight team around her, and she seemed in her element, everyone who dealt with her was impressed, irrespective of their politics. She was sassy and fun and extremely dedicated to her job.

She spoke with real passion. One of those people whose presence turned heads in a room. Big laugh, big opinions, calls a spade a spade. 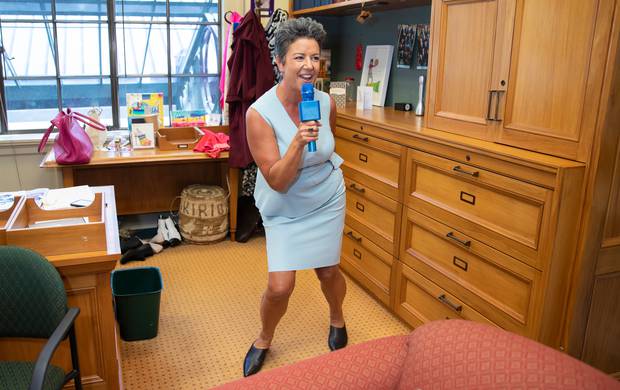 Paula Bennett on a karaoke machine, a present for her 50th birthday, in her office at Parliament. Photo / Mark Mitchell

She's a loss to the party.

And at a time when the National Party can't afford to lose too much more senior talent.
Especially women.

But the other string to her bow was cut-through in the media. That's a tough gig, and many politicians just don't have it.

The pithy one-liner, the right amount of sarcasm or humour, the ability to articulate in a way that makes the 6 o'clock news.

Bennett understood the art of the soundbite, and was able to deliver it without looking like she'd just had four hours of media training and coaching on how to deliver it.

In other words, she was a natural.

Too many politicians these days are too manufactured, too inauthentic, spend too much time on focus group research and advice on how to talk to people.

Here's a tip – just talk. Be yourself.

You may have loved or hated Paula Bennett but you couldn't argue she wasn't at least being herself.

And that authenticity is rare. So she's a loss.

In an age of personality politics, it's a real shame to lose a personality - especially a larger than life one like hers.