It was a recipe for disaster - and now five Timaru teenagers are dead, their families and community reeling.

The five boys died at the scene after the car they were in crashed about 7.30pm on Saturday.

At least one call had been made to police about boy racing in the area shortly before the fatal carnage.

The group - five in the car and one in the boot - were travelling in a Nissan Bluebird sedan which struck a power pole and tore in two.

All five passengers died at the scene.

The 19-year-old driver survived and was taken to Timaru Hospital with serious injuries.

He was well enough to post a message on social media yesterday afternoon, including a photograph of himself in his hospital bed, apologising for the crash.

"Hello everyone just wanted to say I'm not dead I am very very lucky to still be alive and I can't believe what has happened," he wrote, in a post seen by the Herald.

"And I am so so so sorry to the families that I have put in pain coz of stupid mistakes that I made that has costed five lives."

Some of his injuries are visible in the post.

Javarney's father Stephen told Stuff he had gone to bed on Saturday and said it was not unusual for his "social butterfly" son to arrive home later.

Just before midnight his daughter started getting messages about Javarney being killed in the crash.

Stephen Drummond then rushed to the Timaru police station and then had to identify his son at the hospital.

"He's never done this. He's never got in a car, I don't understand it," he said.

"All his mates don't have cars, he went to school with the driver, at primary school. He talks to him and says hello to him, but he's never, ever been joyriding that I know of. I don't understand how it's actually unfolded."

Aoraki Area Commander Inspector Dave Gaskin said yesterday the driver was yet to be spoken to by police.

He said it was too soon to speculate or confirm details but he suspected due to the age of the driver he may not hold a full licence.

Gaskin said a number of people in the car were not wearing seatbelts.

"There were six people in the vehicle, there is only five sets of seatbelts," he told media.

Niko Hill's father learned of his death through a phone call late on Saturday night.

He said his heart was broken. He was not ready to speak more about Niko last night as he prepared to travel to Timaru to support the teen's mother and wider family.

The area where the crash happened is well-known as being popular with boy racers, with a local resident phoning 111 about 6pm on Saturday night to complain about four cars racing and doing burnouts.

"The last thing I said to the call-taker was, 'If you don't send someone out here, someone will get killed', and 90 minutes later, we had this," Ray Colvill told the Herald.

A steady stream of mourners and locals wanting to pay their respects and lay flowers visited the crash site yesterday.

They came and wept at the concrete power pole, still standing, with a just few smudges of car paint near its solid base. Sobbing parents, devastated grandparents, a shaking aunty, and two cousins visited, trying to come to grips with what had happened.

They just felt a numbness, they said.

One father, tears filling red eyes, paced up and down the country road where the five boys died, muttering, "Why? What a waste!"

Among the mourners was Niko's cousin Meadow Bennett.

"I really am in shock," she told the Herald.

She said her Niko was "a cool kid" and she was struggling to come to terms with his loss.

She took a piece of the car's wreckage from the scene as a memento.

Friend Kaleb Ewart said he went to the site for some "peace of mind and see what happened". 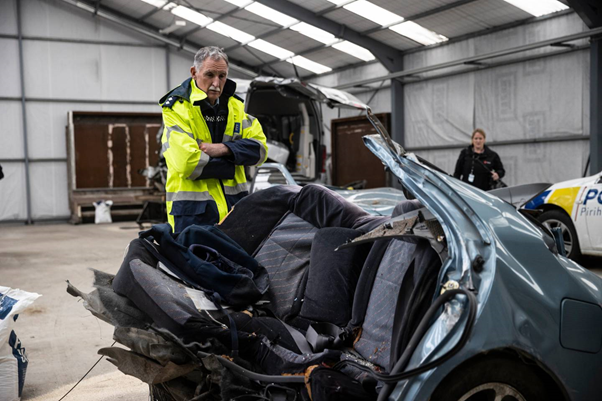 He said Niko was "still young, still growing up" and described him as having "a lot of cheekiness in him".

"He always knew how to make you smile, make you laugh. Every time he walked in, he'd just brighten the room up," the friend said.

A friend of another victim said he was "a funny guy".

"He always knew how to make people laugh," she said.

"(He) was loud at times but generally a great guy to be around. He was friendly and loved adventure.

"All his friends loved him and we will never forget him."

Police said the immediate families of all five boys had been informed, but their names would not be released formally until wider whānau had been reached.

Their investigation into the crash is ongoing and it could be weeks until the police Serious Crash Unit finishes their examination of the scene, car and circumstances.

Charges would not be decided on until their inquiries were complete.

"To have five lives lost in an instant is a terrible tragedy, and our thoughts are with their families," said police national road policing manager Superintendent Steve Greally.

"This is incredibly frustrating… Particularly in a small community, the impact of a crash like this stretches far, and everyone in the area will be hurting."

Gaskin said his thoughts and prayers were with the family of the young men.

"They woke up today to a nightmare that won't go away," he said.

"Timaru's a very small community ... It is a tragedy and it will reverberate around our community for a long time."

"It's just starting to settle in, absolute tragedy. It's really hard to put into words. It's going to take some time," he said.

He said the whole community would be reeling as many of the young people would know some or all of the boys in the crash.

And he urged people not to make judgements.

"My message to our community would be - let's put ourselves in the shoes of the families. I just can't imagine having a teenager leave home and not return and having that awful phone call."