Former Wallaby and outspoken media commentator Peter FitzSimons has stoked the fires of trans-Tasman rivalry on the eve of Bledisloe II, firing a number of shots at the 'sad declining All Blacks.'

Speaking to Newstalk ZB, FitzSimons took aim at All Black veterans for their sluggish play last weekend, labelling the loss a sign the defending World Champions were on the decline.

FitzSimons also suggested the 'dramatic changes' the All Blacks made to their starting lineup tomorrow night reflected a coach who had lost confidence in his team.

"Sonny Bill Williams is 34, how's Sonny Bill going to go up against James O'Connor?" Fitzsimons said. "The All Blacks just looked a bit old and slow.

"The Wallabies simply outclassed the All Blacks. They humiliated those poor All Blacks and it was good for rugby.

"I thought it was going to be an absolute slaughter, the sad decline of New Zealand rugby I said to myself, when will they come good?" 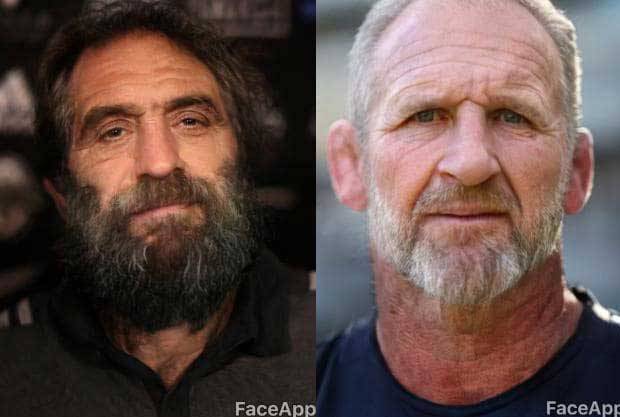 Sam Whitelock and Kieran Read as mocked by the Daily Telegraph via FaceApp.

Sonny Bill Williams, Sam Whitelock and captain Kieran Read all got the photo treatment, under a headline "Wallabies warned not to take All Blacks' senior citizens lightly".

Meanwhile, two inexperienced wings, Sevu Reece and George Bridge, were named yesterday to start against the Wallabies as part of Steve Hansen's radical plan to bounce back and retain the Bledisloe Cup.

It was just two of five changes Hansen made in what has been regarded his most dramatic reaction to a loss, as the All Blacks look to double down on their gamble to test which players are capable under pressure ahead of next month's World Cup.

"Obviously we'd like Ben, Owen and Rieko playing better, but we've made decisions because we've got to find out more about these other people in big pressure-cooker situations," Hansen explained at a press conference in Auckland yesterday.

"To win a World Cup we've had to roll the dice a bit." Surprised by Hansen's selections, however, FitzSimons said the changes reflected a head coach who had lost confidence.

"Throwing them into the furnace five weeks out from the World Cup seems an extraordinary move to me," he said.

"It looked to me like the coach had lost confidence in his team … I suppose he knows what he's doing but it seems very odd to me."

FitzSimons voiced his confidence for the Wallabies to claim a back-to-back victory over the All Blacks on Saturday, crediting the potential of Wallabies coach Michael Cheika.

The two sides will meet tomorrow night at Eden Park.