Busy motorways are near empty and bustling commuter facilities have fallen silent as New Zealanders lock themselves away for the first day of coronavirus self-isolation.

The country is now officially in self-isolation for at least four weeks as Covid-19 infection rates continue to escalate and Prime Minister Jacinda Ardern urged Kiwis to stick to the plan to break the chain. The bus exchange in Wellington just before 7am this morning. Photo / Adam Cooper

An eerie calm has fallen over motorways and train stations this morning - the Wellington Railway Station was virtually empty between 6.40am and 7am.

The lockdown comes as the number of cases of coronavirus nears 450,000 around the world - including 205 cases in New Zealand so far. The global death toll is set to reach 20,000 today; another 111,000 people have recovered.

Another 738 people have died from the coronavirus in Spain, pushing its total death toll above China's, to 3434. It is now second only to Italy, where more than 6800 people have died.

Meanwhile in the United Kingdom, a huge exhibition centre in London is being converted into a makeshift hospital as Britain prepares for potentially thousands more cases.

Back in New Zealand, Ardern said the benefit of the lockdown would not be felt for many days to come and numbers would keep rising.

"But don't be discouraged. Over time, we will see change if we all stick to the plan. You may not be at work, but that doesn't mean you don't have a job. Your job is to save lives, and you can do that by staying home and breaking the chain."

A state of national emergency was declared yesterday and is among many powers government agencies have to compel people to contribute to the effort.

The Ministry of Health yesterday confirmed 50 new cases and probable cases in the previous 24 hours, bringing the total to 205. 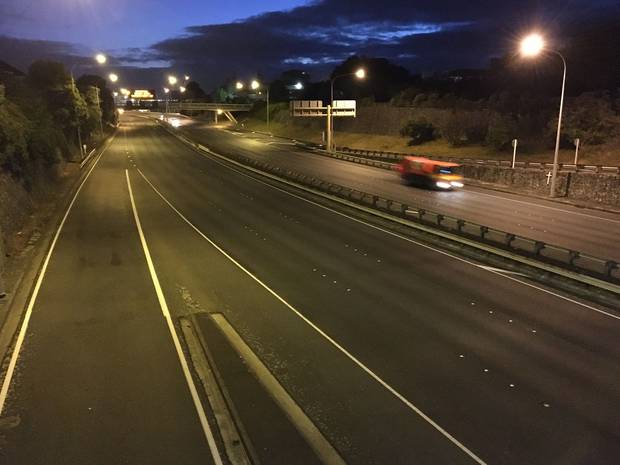 The motorway heading into Wellington was practically empty just before 7am on the first official day of a nationwide lockdown. Photo / Adam Cooper

Six people were in hospital – three in Wellington, one on Rotorua, and two in Waikato - but none was in intensive care.

Twenty-two people who had previously tested positive are said to have recovered.

Ardern said modelling suggesting the number of cases in New Zealand could reach the thousands before dropping.

The alert level could be eased once the number of cases declined although the prevalence of community transmissions was also a factor.

Ardern announced new measures to ensure those returning home either go into self-isolation or be forced into quarantine.

Eight people who flew in to Auckland Airport on Tuesday had tested positive for Covid-19.

The Government has booked hotels near airports to complement Defence Force facilities at Whangaparāoa to require quarantine of arrivals who are symptomatic, who did not have a credible plan to self-isolate or did not have the means to safely return to their home to self-isolate.

All arrivals who are symptomatic are tested.

Up to 10,000 were expected to have arrived by the end of the month although about 30 per cent of people had not shown up as transit became harder.

Arrivals with self-isolation plans would be checked on by the police and they would be taken to quarantine facilities if they failed to self-isolate properly.

New Zealand moved to alert level 4 at 11.59 last night, requiring all but essential services to close down or work from home.

Schools are closed and events and gatherings are banned although clear guidance on funerals has not yet been finalised.

Ardern urged people to stay home and mix only with their "bubble".

She reiterated advice that playgrounds were out of bounds because there were so many surfaces on them on which the virus could stay for 72 hours.

She was aware of the idea of putting bears in windows to allow parents to take their children on "bear hunts" during their walks.

And for those who went walking in her neighbourhood in Wellington, they might just see one, she said. 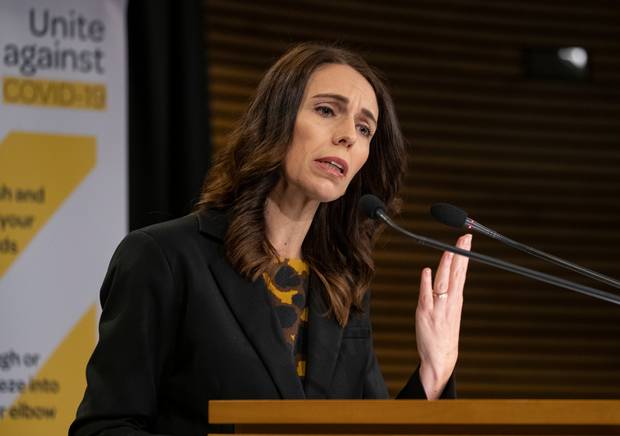 People are allowed to shop for food and exercise close to home but are requested to largely stay home and behave as though they had Covid-19.

Civil defence director Sarah Stuart-Black said she hoped she did not have to use the emergency powers to enforce the restrictions but there would be zero tolerance for people flouting the rules.

Parliament met yesterday in a bipartisan spirit with only 24 MPs in the debating chamber for ministerial statements on the crisis before legislation was passed to help address the crisis.

Ardern said she was fully aware New Zealand had moved at speed to introduce its measures when there had been no deaths and so few infections.

"But we have no time to waste. We could have waited to plan every intricate detail required to execute the closure, till we could answer every single question or circumstance."

But every hour was one, two or three more people exposed to Covid-19.

National Party leader Simon Bridges said some would say the shut-down of the country was an over-reaction.

"I'd prefer that that was the case, because it means people didn't die needlessly."

Parliament passed an Imprest Supply Bill authorising expenditure of up to $40 billion in operational spending, and $12b in capital spending.