The Howl of a Protest event, organised by Groundswell New Zealand, has seen thousands of farm vehicles rumbling through cities in protest against what farmers say is increasing interference from the Government, unworkable regulations and unjustified costs.

The protests are taking place in 55 cities starting from Kaitaia to Southland.

Hundreds of farmers have hit Auckland CBD after taking to the Southern Motorway in tractors, heavy farm equipment and utes to participate in the protest. The area around Drury and Ramarama was gridlocked at 9.30am as the convoy made their way to the motorway. Auckland motorists travelling on the Southern motorway were told to expect delays as scores of tractors and utes travel towards the city centre this morning.

The New Zealand Transport Agency warned motorists heading into the city on the Southern Motorway to consider using alternate motorways and avoid the protest.

It said traffic was heavy between Drury and Manukau as slow vehicles head north on the Southern Motorway. Motorists should consider detouring via SH20, SH16, or be prepared for delays.

One video clip shared on Facebook shows large farm vehicles lining a main road in Franklin. The man who captured the footage called it a great turnout. One huge tractor carried a big sign at the back, reading: "No farmers, no food."

Several tractors have the New Zealand flag flying from them.

Another video showed a long line of tractors snaking down the northbound slow lane. Tractors and farm vehicles spotted on SH1 Slippery Creek about 9.40am. Photo / Supplied

Police reported a minor crash on the motorway near Drury and traffic is currently backed up to Ramarama.

It is not known whether the crash involved a farm vehicle.

Police are urging motorists in the area to delay travel on the Southern motorway into Auckland if possible - or expect delays. "We want to remind motorists to keep a safe following distance between vehicles and to be patient and considerate of others on the road." 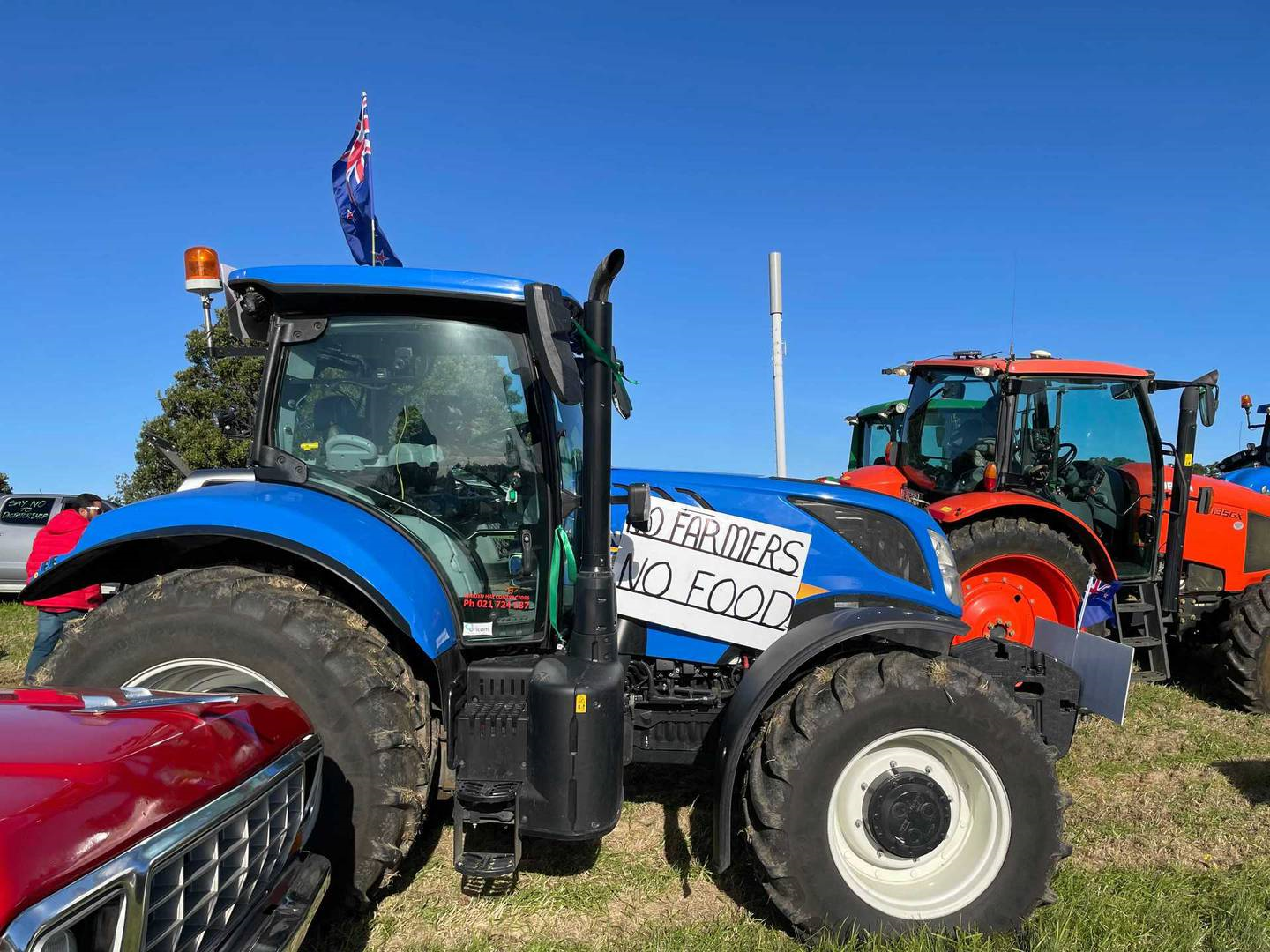 Police are at every on ramp from Sylvia Park to the Wellesley St exit guiding traffic. The convoy has started to make their way down Auckland's Queen Street.

More than 200 vechiles - mostly utes but also trucks and contractors vans - at the Kerikeri protest so far as well as 25 tractors, causing a traffic grid lock.

More tractors and utes are streaming into Kerikeri Sports Complex.

First fleet of utes are returning from their circuit of town though most of the tractors haven't even left the sports ground.

Twisted Sister's We're Not Going to Take it playing on the PA. Many banners read No Farmers, No Food. A Ute at the Kerikeri protest. Photo / Peter de Graaf

Around 500 utes and trucks have gathered at Whangarei's Howler Protest in Barge Park.

Around 500 vehicles gather in Whangarei's Barge Park for the protest. Photo / Tania Whyte

Stephen Martin, part of the team behind Whangarei's event, said the turn out had already blown their expectations out of the water.

"We were expecting around 200 to 300 people but we've gone well beyond that. "It's pretty impressive and a little bit overwhelming. I didn't expect this many people," he said.

The number of protestors clearly showed how many people were upset with the current situation, Martin said.

"We're a group of people who don't usually do this sort of stuff. You don't usually see farmers standing up to something unless it really is a problem."

Tractors have left Barge park and now are on their way to Whangarei town. Kody came out to show his displeasure towards the increased dog fees. His owner says "He is a pest dog and the council does not include pest dogs in the working dogs category." Photo/Avina Vidyadharan

Dairy farmer Daryl Barge, from Pipiwai, has spent 41-years of his life farming.
He said, like everyone else here, he's fed up with being told what to do in a setting where farmers are silenced.

"There is a long list of things that the Government has done to rural New Zealand. We've had enough."

Barge said the Government had made rural New Zealanders livelihood "very, very difficult".
"The mental stress of being told constantly that you're polluters, that you are bad for the country…I really feel for the younger generation of farmers. It's pretty tough."

Barge said even though his children loved the farm, none of them wanted to pursue it as a calling.

"I'm glad they don't, I wouldn't want to see them go through this."
He said farmers had been let down by mainstream media, whose voices are not accurately or fairly voiced.

"We don't feel our side of the story is ever heard."

Barge hoped media coverage of today's protest would be a fresh start. Joan Kairuz who is present at the protest says "we own a plumbing business and we need a Ute. You do not expect us to carry sewage on the back of our EV Utes. that is just not practical."

There is continuous tooting of horns from traffic on State Highway 2 south of Katikati for protestors gathered south of the township.

Tauranga Ingrid Raath said she was taking part in the Katikati demonstration because what affected farmers also affected the wider community and it was important to listen to their concerns.

"I'm fully in support if the farmers because they supply food to not just themselves but to all of us." Supporters are stanging on the side of the highway cheering and holding signs.

Tractors are travelling along State Highway 5 into Rotorua Around 200 people are gathered at the Whanganui Racecourse ahead of a convoy around the city, set to kick off at 12pm. Hundreds of Hawke's Bay farmers have rolled into Hastings for a Howl of a Protest.

Traffic was at noon building on State Highway 51 kilometres back to Pakipaki as the Groundswell NZ protesters congregated near the Hastings racecourse.

Two hours beforehand, vehicles were already lining up on Hastings' Railway Rd. They were expected to convoy through Hastings via Omahu Rd and the Hawke's Bay Expressway about 12.30pm, before parking up at the Showgrounds Hawke's Bay Tomoana.

Signs including 'Black Utes Matter' and 'Bureacracy is the art of making the possible impossible' could be seen on the backs of vehicles.

A reporter at the scene said the Railway Rd meet-up already had hundreds of vehicles parked up as at noon.

A large convoy of tractors, farm machinery and utes are making their way down Oxford Street, Levin during the Howl of a Protest through the Horowhenua town.

One farmer said he's tired of burying too many mates who couldn't handle it anymore. 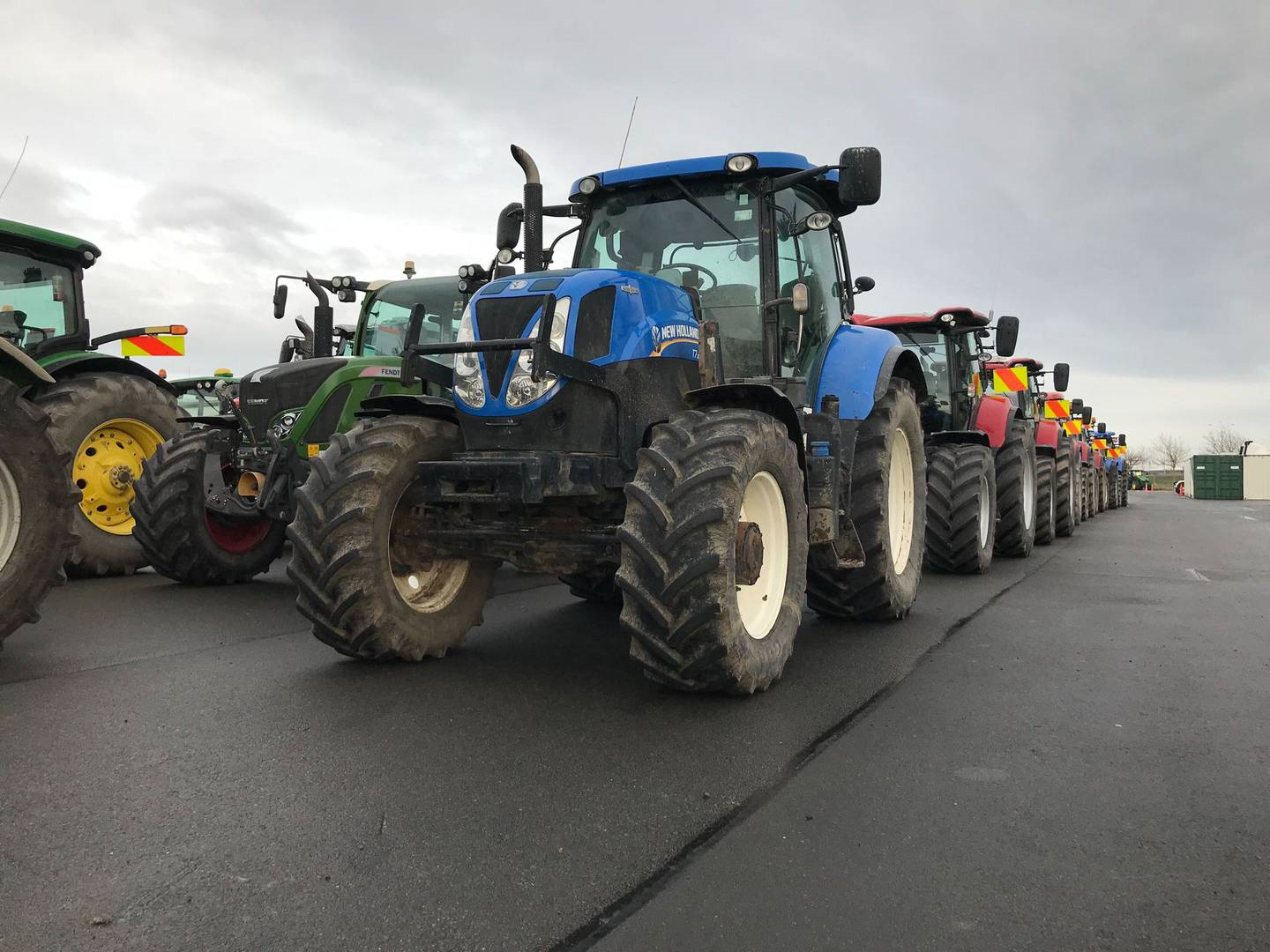 Farmers gather for the protest in Canterbury. Photo / Tim Cronshaw

The Herald understands a protest planned for Christchurch has been moved out of Cathedral Square as organisers were expecting a large number of participants.

Some protesters have been diverted to other Canterbury towns.

Canterbury farmer Bob Paton said for too long the community and the country haven't valued and appreciated what the farmers are doing. Coordinator for Christchurch Aaron Stark says he is blown by the amount of people who have turned up for the protest.

"We had people turning up at 9.30am. I'm blown away with the amount of urban people, the amount of tradies, electricians you name it. 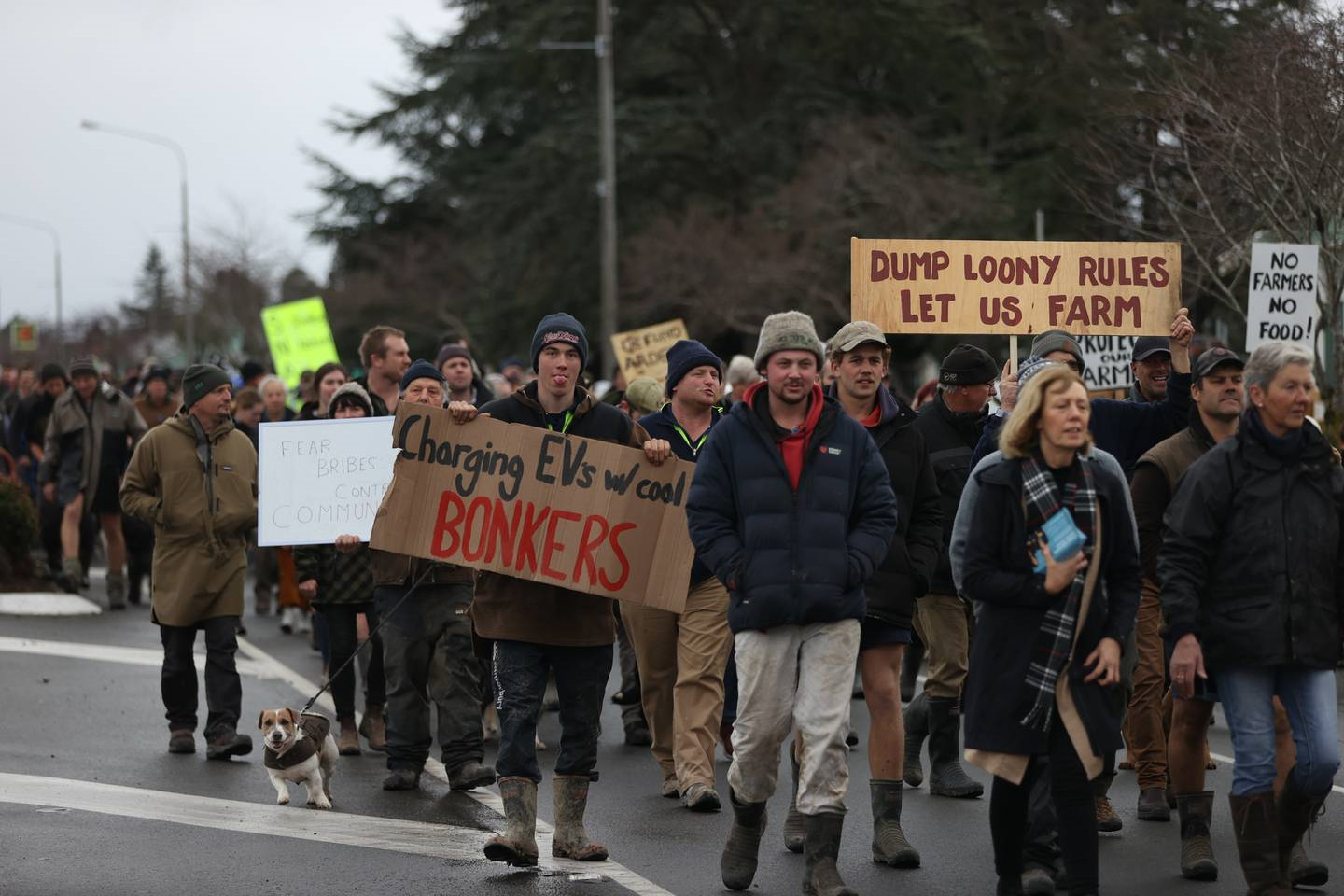 Stark said he expects about 200 Utes to take part and there could be up to 500 tractors.

"We're doing this because of unworkable regulations, we've got to a point now where the whole industry is hurting." Farmers gather for the protest in Canterbury. Photo / Tim Cronshaw

Over 800 protestors are heading to Ashburton domain from the South side of the town.
Hokonui FM's Phill Hooper said there is the same amount if not more coming from the north side.

More than 100 tractors and countless utes are making their way from Mosgiel to Dunedin's Octagon. Farmers gather in Mosgiel, the meeting point for the Dunedin protest, as part of the Howl of a Protest. Photo / Supplied

Doug Kamo told the Herald there has been a huge response to the protest.

A briefing was held prior to it starting with the crowd told that it needs to be a peaceful protest.

Kamo said it was very noisy as the vehicles headed out with dogs barking and horns being tooted. A lone anti farming protestor in Dunedin's Octagon was met by firm opposition and had her sign ripped down.

Torrential rain in Greymouth has not stopped protestors coming out in full force.

Andy Thompson, who is at the protest, said he has never seen so many Utes, tractors and trucks in one place in Greymouth. 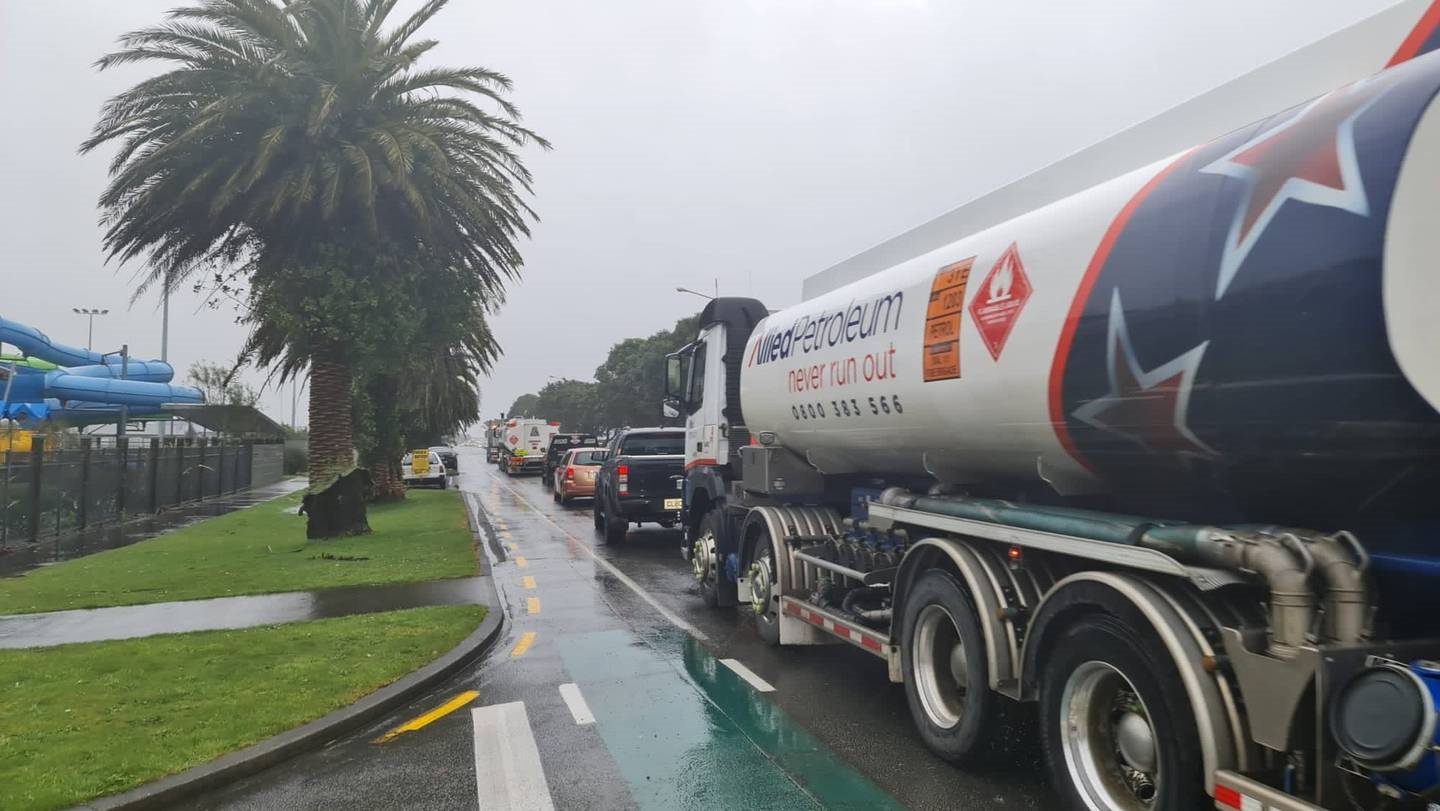 "There are literally hundreds and hundreds of them snaking through Greymouth. They're going to have a lot of difficulty gathering in the town square.

"It's absolutely torrential here but that hasn't stopped any Coasters and I knew it wouldn't.

"There's a saying that there's no such thing as bad weather just bad gear."

A police spokeswoman said authorities were aware of the plans for protest action today.

"Police recognise and respect the lawful right to protest and our aim is to ensure that both the participants and the community are safe.

Police will monitor the activities to ensure the safety of everyone involved."

People have been encouraged to bring their tractor, ute and dogs for a bark-up.

The only major city that had left off the itinerary, and that was intentional, was Wellington.

McKenzie was expecting a huge number of tractors in Auckland's Queen St today.

The logistics were different in the various areas, with some towns requiring traffic management plans, he said.