Life has returned to normal for millions in Britain since coronavirus restrictions were lifted over the summer. But while the rules have vanished, the virus hasn't.

The UK recorded 43,738 new Covid-19 cases on Tuesday, slightly down from the 49,156 reported Monday, which was the largest number since mid-July. New infections have averaged more than 44,000 a day over the past week, a 16 per cent increase on the week before.

Last week, the Office for National Statistics estimated that one in 60 people in England had the virus, one of the highest levels seen in Britain during the pandemic. 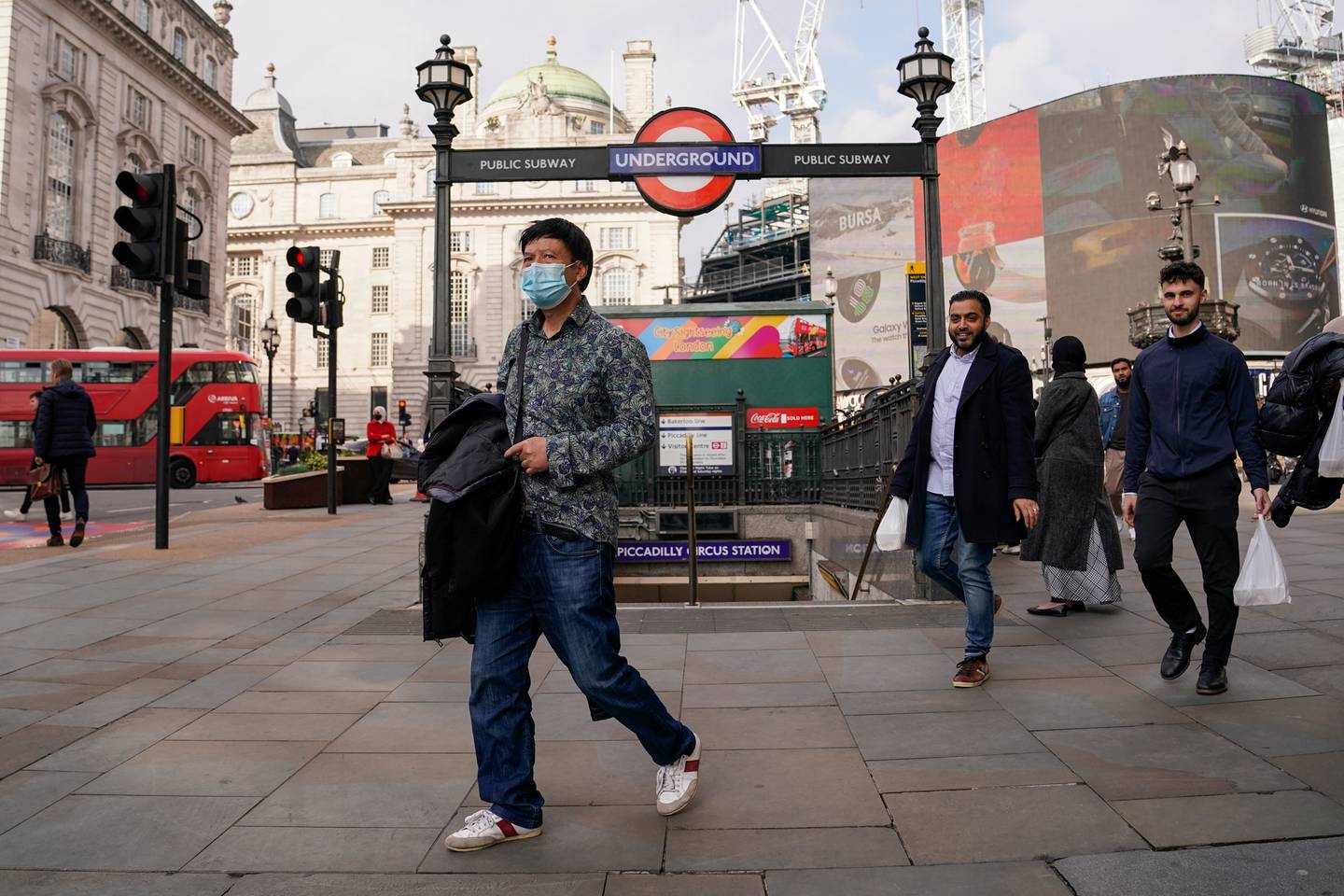 A man wears a face mask as he walks in Piccadilly Circus, in London. Photo / Alberto Pezzali, AP

In July, Prime Minister Boris Johnson's government lifted all the legal restrictions that had been imposed more than a year earlier to slow the spread of the virus, including face coverings indoors and social distancing rules. Nightclubs and other crowded venues were allowed to open at full capacity, and people were no longer advised to work from home if they could.

Some modellers feared a big spike in cases after the opening-up. That didn't occur, but infections remained high, and recently have begun to increase — especially among children, who largely remain unvaccinated.

Also rising are hospitalisations and deaths, which have averaged 130 a day over the past week, with 223 reported Tuesday alone. That is far lower than when cases were last this high, before much of the population was vaccinated, but still too high, critics of the government say. Britain has recorded more than 138,000 coronavirus deaths, the highest total in Europe after Russia. 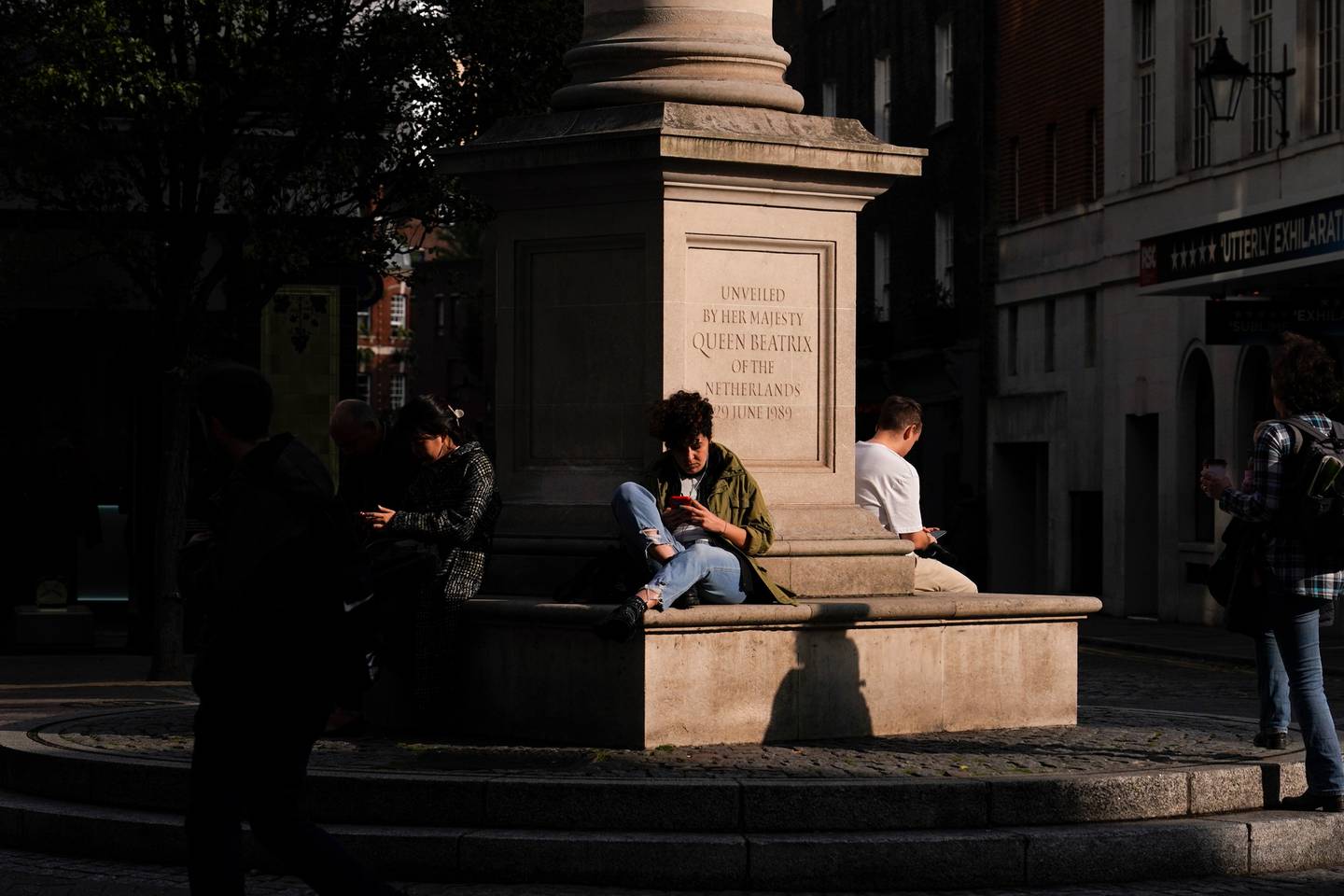 People sit at the bottom of a column in the area of Covent Garden. Photo / Alberto Pezzali, AP

Against that backdrop, some feel Britons have been too quick to return to pre-pandemic behaviour. Masks and social distancing have all but vanished in most settings in England, including schools, though Scotland and other parts of the UK remain a bit more strict. Even in shops, where masks are recommended, and on the London transit network, where they are mandatory, adherence is patchy.

A plan to require proof of vaccination to attend nightclubs, concerts and other mass events in England was dropped by the Conservative government amid opposition from lawmakers, though Scotland introduced a vaccine pass programme this month.

Some scientists say a bigger factor is waning immunity. Britain's vaccination programme got off to a quick start, with shots given to the elderly and vulnerable beginning in December 2020, and so far almost 80 per cent of eligible people have received two doses. The early start means millions of people have been vaccinated for more than six months, and studies have suggested vaccines' protection gradually wanes over time.

Millions of people in Britain are being offered booster shots, but critics say the programme is moving too slowly, at about 180,000 doses a day. More than half of the people eligible for a booster dose haven't yet received one.

The UK also waited longer than the US and many European nations to vaccinate children ages 12-15, and only about 15 per cent in that age group in England have had a shot since they became eligible last month.

"It's critical we accelerate the booster programme," said epidemiologist Neil Ferguson, a member of the government's Scientific Advisory Group for Emergencies.

Ferguson said one factor influencing the UK's high case numbers was that it has relied heavily on the AstraZeneca vaccine, "and, while that protects very well against very severe outcomes of Covid, it protects slightly less well than Pfizer against infection and transmission, particularly in the face of the Delta variant". 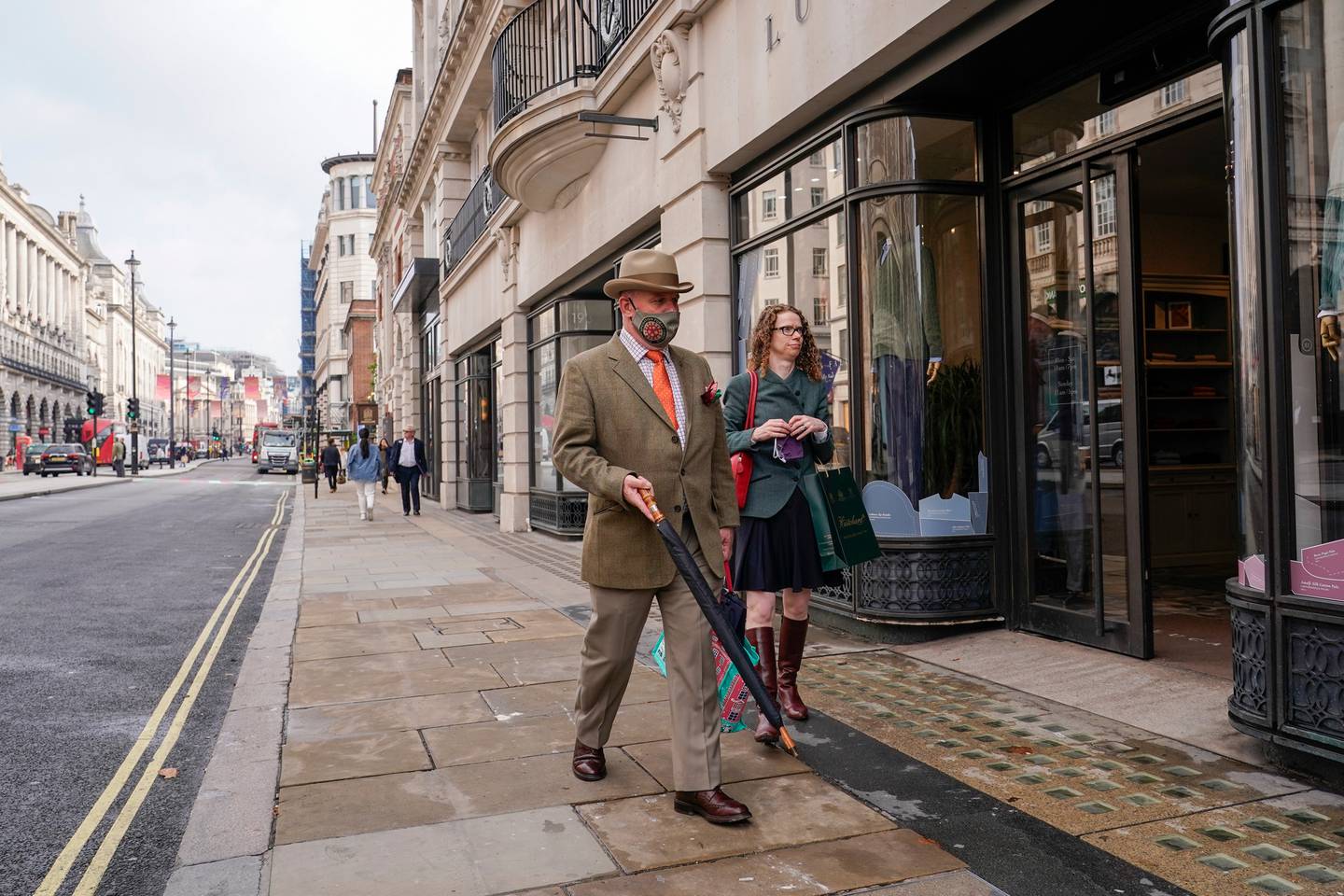 A man wears a face mask as he passes a woman without in London as scientists press the British government to re-impose social restrictions. Photo / Alberto Pezzali, AP

He also noted that "most Western European countries have kept in place more control measures, vaccine mandates, mask-wearing mandates, and tend to have lower case numbers and certainly not case numbers which are going up as fast as we've got".

"But at the end of the day this is a policy decision for government to make," he told the BBC.

Scientists in the UK are also keeping an eye on a new subvariant of the dominant Delta strain of the virus. The mutation, known as AY4.2, accounts for a small but growing number of cases in Britain.

Francois Balloux, director of the University College London Genetics Institute, said the subvariant might be slightly more transmissible and was being "closely monitored". But he said evidence suggested "it hasn't been driving the recent increase in case numbers in the UK".

A report by lawmakers released last week concluded that the British government waited too long to impose a lockdown in the early days of the pandemic, missing a chance to contain the disease and leading to thousands of unnecessary deaths. Critics say it is repeating that mistake.

Last month, the Prime Minister said the country might need to move to a "Plan B" — reintroducing measures such as mandatory masks and bringing in vaccine passes — if cases rose so high in the autumn and winter that the health system came under "unsustainable" strain.

For now, the government says it won't change course, but will try to boost vaccination rates, with a new ad campaign and an increased number of sites outside of schools where kids can receive their shots.

Johnson's spokesman, Max Blain, said "we always knew the next few months would be challenging". But he said the government was trying to protect "both lives and livelihoods".

"Clearly we are keeping a very close eye on rising case rates.

"The most important message for the public to understand is the vital importance of the booster programme."

But, he added: "There are no plans to move to Plan B."