Most states are going backwards in their plans to open up their economies as Victoria's severe coronavirus outbreak spooks authorities.

On Monday, both South Australia and Tasmania announced changes as Victoria's case numbers continue to remain high. It comes after NSW, Western Australia, Queensland and Victoria wound back the relaxing of their restrictions.

Back in May, an optimistic PM announced his plan to create a "COVID-safe society and economy" by July.

Sadly that timeline has come and gone and most states are now reversing or delaying their plans to open up.

Stage one and two of the plan involved allowing larger gatherings in people's homes of up to 20 people, and the re-opening of businesses such as gyms, beauty salons, cinemas, galleries and amusement parks.

Some interstate travel could be permissible in stage two, Morrison said.

Stage three would have seen gathering sizes increased to 100 in pubs and nightclubs.

Interstate travel would have been allowed to resume, and it was expected that cross-Tasman and Pacific Island travel, as well as international student travel would also have been considered.

Australia got very close to fulfilling the PM's three-step plan but progress stalled and went backwards after Victoria's outbreak.

Here's where each state stands:

The new restrictions will see at-home gatherings reduced from 50 down to 10 people, while patrons at licensed pubs and clubs must be seated.

Marshall said "Australia is on high alert" and pointed to the outbreak in Victoria.

"There are more than 6000 active cases in Victoria, and we are extraordinarily concerned at the potential for seeding in other jurisdictions," Marshall said.

Last month South Australia announced it would no longer lift its border restrictions with New South Wales on July 20, citing concerns about an outbreak in the state.

Residents will still be able to enter the state, but will need to spend 14 days in hotel quarantine. Victorians are not able to enter SA at all.

On Monday, Premier Peter Gutwein announced Tasmania would not be re-opening its borders to South Australia, Western Australia and the Northern Territory as expected on August 7.

Gutwein says the state will not open other parts of Australia before August 31.

The state has delayed its move to phase 5 of its road map, which was due to be implemented on August 1.

The state has set a tentative new date for the beginning of phase 5 on August 15 but a final decision on whether this can proceed will be decided later.

It would also see the removal of WA's 2 square metre rule and the 50 per cent capacity for our major venues.

The state went to phase 4 on June 27 and this removed requirements for people to be seated at pubs and restaurants, and the requirement to maintain a patron register at these venues.

Just weeks after interstate visitors were welcomed back to Queensland, the axe was swung on Sydney residents and others living in a list of hotspots that have been barred from entering the state.

The state has also reinstated restrictions from July 24 for businesses to ensure all dining and drinking is for seated patrons.

Organisers of events expected to have more than 500 people have to inform the local public health unit at least 10 business days before the event taking place.

The changes come after three women, who tested positive coronavirus, were found to have lied about visiting Melbourne and visited a number of Brisbane venues while infectious.

The state is grappling with its own outbreak, which appears to have been imported from Victoria.

Last month Premier Gladys Berejiklian announced some restrictions would be wound back including reducing the size of groups allowed in hospital venues from 20 people to 10 people.

Venues are now allowed to have a maximum of 300 people if the one person per four square metre rule is maintained.

Weddings and corporate events were restricted to 150 people, while funerals and religious venues were limited to 100 people.

NSW has also closed its border with Victoria for the first time in 100 years.

There's currently no evidence of community transmission in the Northern Territory and the locals are keen to keep it that way.

The Indigenous community and traditional owners living close to Uluru created a blockade at the entry of Uluru-Kata Tjuta National Park on Monday after a Jetstar flight was allowed to land from a considered coronavirus hotspot.

Those from a declared hotspot, including those coming from Victoria and parts of NSW and Queensland, have been asked to reconsider their plans and must undertake 14 days mandatory supervised quarantine at their own cost of $2500.

But locals were not happy when a plane from Brisbane was allowed to land, taking their health concerns into their own hands.

Since July 17, anyone who is not from a hotspot does not have to self-quarantine.

Stage 3 restrictions have been in place since June 5, which allows residents to play team sports and go to cinemas and nightclubs.

Major events and public gatherings of over 500 people are allowed but must receive formal approval the Northern Territory Chief Health Officer.

Canberrans are being urged not to travel to areas where there are known cases of the coronavirus. Those who have visited specific NSW venues, including the Crossroads Hotel and Batemans Bay Soldiers Club, on certain dates are required to self-quarantine for 14 days even if they do not have any symptoms.

The ACT moved to Step 2.2 restrictions on June 19, 12 noon, which allows up to 100 people to gather in hospital venues, subject to the one per four square metre rule.

No date has yet been set for its move to Step 3.

The epicentre of Australia's explosion of coronavirus cases introduced a stage 3 lockdown last month before announcing a stage 4 lockdown on Melbourne residents from Sunday night. 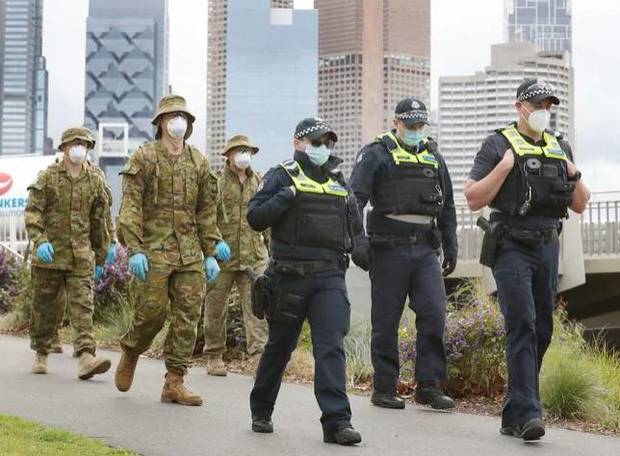 Premier Daniel Andrews declared a 'state of disaster', giving authorities sweeping powers, which includes a nightly curfew for Greater Melbourne from 8pm to 5am.

The lockdown restricts people from travelling more than 5km from their home and only one person is able to leave the home to buy groceries once a day.

People can only exercise for one hour a day and must also stay close to home.

It probably goes without saying that no state or territory is welcoming travellers from Victoria.