Foodbanks and social service organisations are predicting a surge in demand as cases continue to emerge of people struggling to feed their families.

Since lockdown began, one West Auckland food charity has seen demand triple and that's expected to rise again when the wage subsidy ends for many next month.

Brook Turner, head of community service development at VisionWest Community Trust, says he expects demand to grow by an additional 700 families in the West Auckland region.

Helping ease a little pressure at the moment has been a sizeable $200,000 donation from philanthropic organisation, The Trusts, which will be evenly split between VisionWest and charity Fair Food.

Turner said as lockdown kicked in it exposed the level of huger-related poverty in New Zealand, but the second wave expected at the end of the wage subsidy will be worse.

"There's been a major moment of us thinking just how big this thing is ... we know we've had a housing crisis in the country but we've also had a hunger crisis that has been under wraps largely due to the fact that we have a low-wage economy and a high cost of living."

Demand on their organisation had more than tripled during lockdown.

VisionWest was also supporting an additional 20 other organisations including local marae.

He believed there would be a third wave of demand to come later in the year, when some businesses had no choice but to fold.

"We're already seeing cracks in the surface with redundancies. I believe there will be a third wave too, with businesses getting through September, October and November and then collapsing.

"There is a perfect storm coming and it will be a once-in-a-generation kind of moment.

"We've got to walk with people, give them employment opportunities, set up community enterprises. We will need public, private and non-profit partnerships that help build a new economy to have a co-ordinated food system and a significant response to those in poverty."

VisionWest provided wrap-around support to those in need, with an empowerment philosophy which sees those receiving food support also volunteering at the organisation to help others like themselves.

"Our whole approach to kai is that it is a great connector and food is a basic human right like shelter, without those things your whole world is in disarray."

West Auckland woman and new mother Keynah had been visited by eight family members from Samoa since earlier this year. They were due to fly home last month but were now stuck due to Covid-19.

She had been grateful for help from VisionWest to help with food parcels due to the extra mouths to feed.

"They not only brought food parcels but seven blankets too, which was great as it's getting cold."

Veronica Shale, executive director of Fair Food, which collects and distributes surplus food from retailers and manufacturers, said as more hospitality businesses struggle, there is a flow-on effect for suppliers and food wastage and scarcity are the results.

"The issue is how do we divert this food that's not needed anymore away from the landfill and back into the supply chain so organisations like us can help get it to those who need it. 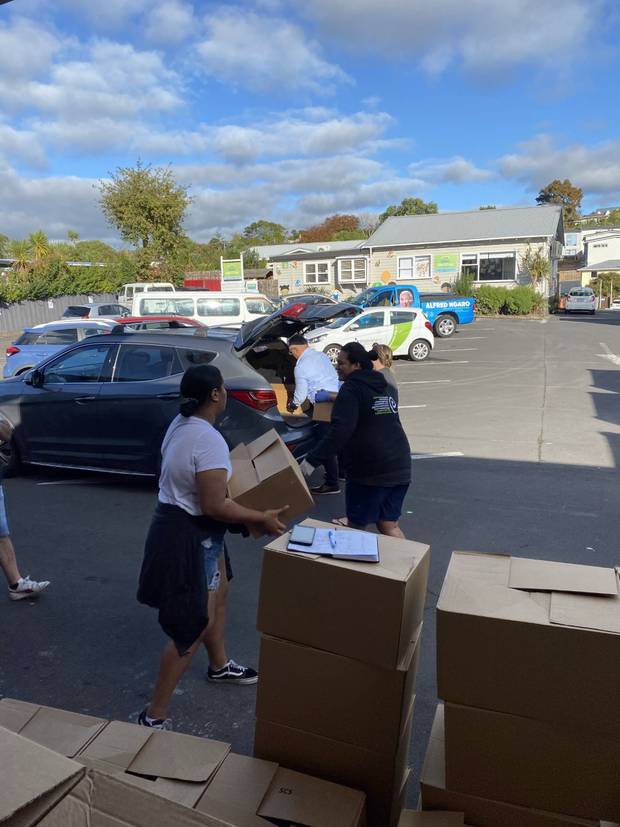 Boxes of food is put into vehicles to be donated amongst the West Auckland community by VisionWest staff. Photo / Supplied

Before the outbreak of Covid-19, most of the surplus food picked up from her organisation was from supermarkets.

"Now it's definitely more business to business, so we're picking up from growers, producers and manufacturers."

In month one of lockdown they "conservatively rescued" more than 121 tonnes of good, surplus nutritious food, which equated to more than 348,000 meals.

"Rather than being dumped, this food is doing good.

"In the past, we've struggled to get good protein as meat, chicken and dairy are expensive and what we've been rescuing is restaurant quality stuff."

They also took 26,000 eggs off a nationwide fast food chain that was unable to utilise them.

Matt Williams, acting CEO of The Trusts, which made the donation, said they were working with a range of community organisations who have had their usual source of funding disrupted during the lockdown.

"We want to encourage other corporates who are in a position to help to reach out to these groups and find a way to help them, whether through financial support or even lending warehouse space and logistical support."