Another week, another commanding bonus-point victory for the All Blacks. Each more impressive than the last, too.

After three comfortable wins against the Wallabies, the last two ensconcing the All Blacks atop the Rugby Championship table, Ian Foster's men held the Pumas to the open flame grill and then uncorked Mendoza's best Malbec with one stunning second-half try.

The All Blacks enjoyed total control on the Gold Coast – so much so it was no surprise the Pumas were held scoreless. The imagination and attacking potential between the two teams was poles apart as the All Blacks' freedom of expression and variety blew the Argentines away.

A change in style was supposed to restrict the All Blacks more than in recent weeks. After a Wallabies team that, like the All Blacks, embraces pace and width, the Pumas' confrontational approach, their suffocating defence, would present a different challenge. That theory was true for brief periods, but not nearly long enough.

With five more in this match the All Blacks have now scored 19 tries in their past three tests – a warning shot of their potent attacking weaponry. Beauden Barrett's magic flick ball for Luke Jacobson's first try will have the world in awe yet similar interchanges are becoming frequent between the All Blacks big men up the middle.

As was the case in Perth last week, this is where the All Blacks again did the business with first time captain Brodie Retallick, Nepo Laulala and Jacobson - the Chiefs No 8 nailing his chance with two tries - all prominent.

The physicality from their forward pack was evident from opening tackle when Laulala flatted inspirational Pumas captain Pablo Matera. From then on, the All Blacks never shied away from the confrontation to win several breakdown penalties – Retallick claiming two, TJ Perenara, Dalton Papalii, Samisoni Taukei'aho, Quinn Tupaea one each – and lay a platform to unleash their brilliant backline.

Outside Barrett, regaining his dynamic running game with each outing, the midfield pairing of David Havili and Rieko Ioane shone. Havili continues to prove a steadying influence, showing his nous to make sound decisions about when to tuck the ball and take contract, pass or kick.

With ample time and space Ioane proved as threatening from centre, where he stepped in late for Anton Lienert-Brown, as he was from the wing in Perth last week.

Such was the supreme All Blacks dominance Foster had the luxury of replacing Barrett and Havili after 49 minutes, with Damian McKenzie coming into No 10 and Tupaea slotting outside him.

Despite missing Richie Mo'unga, Sam Whitelock, Aaron Smith, Ardie Savea, Codie Taylor, Dane Coles and Lienert-Brown, the All Blacks took another major step forward in this match. They continue to build depth - the performances of Taukei'aho and Tupou Vaa'i off the bench cases in point – and progress their game in different situations.

Since shocking the All Blacks for the first time in Sydney last year the Pumas have now conceded 77 points and scored none in the two return tests. With poor discipline and conceding two yellow cards, they were never in this contest.

By way of comparison, the world champion Springboks defeated the Pumas 32-12 and 29-10 in much less emphatic fashion in South Africa. 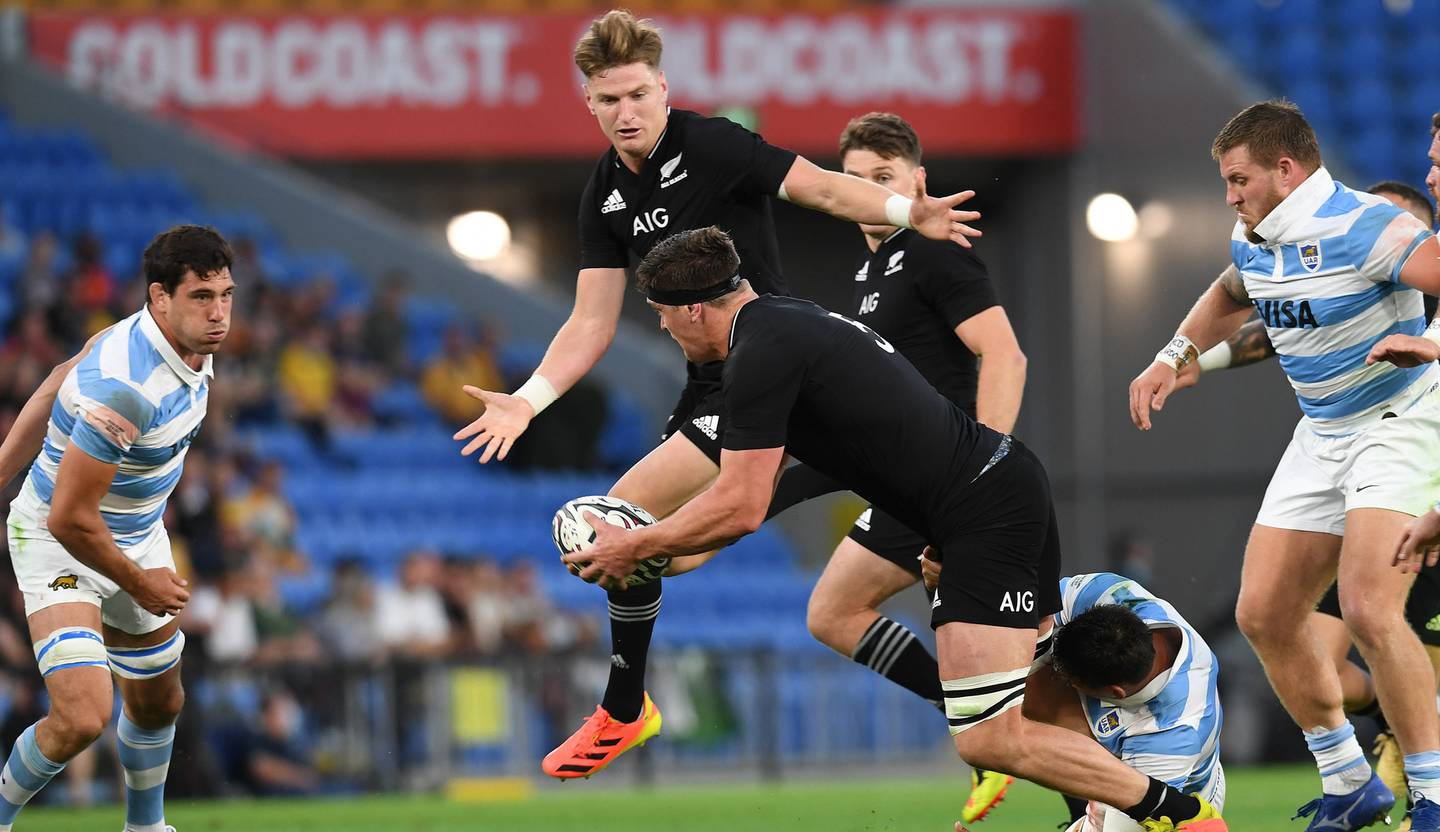 Scott and Jordie Barrett on the attack for the All Blacks. Photo / Photosport

To view the scoreline in isolation is to believe the All Blacks ran rampant from the opening whistle when, in fact, they were made to work incredibly hard for their points at times.

While the Pumas attack and clearance kicking left a lot of be desired, their defence brought its usual commitment to the cause – the All Blacks forcing them to make almost 200 tackles.

The All Blacks savoured 70 per cent possession and 73 per cent territory in the first half yet they often found cracking the Pumas tryline difficult.

Jordie Barrett couldn't quite finish two kicks from brother Beauden; Ioane held onto the ball a fraction too long after slicing onto a Jacobson short ball.

And while Asafo Aumua, in his first test start, carried powerfully all over the park he endured several shaky moments with his lineout throwing proving costly; twice missing the mark inside the Pumas 22.

Ioane profited early after Barrett challenged the line and the Pumas knocked the ball down for the opening try. After that, though, the All Blacks hammered away for long periods with only a Barrett penalty to show for their efforts.

Despite those frustrations the All Blacks remained calm and patient; knowing they were gradually wearing the Pumas down.

First Sevu Reece came off his wing to sneak over and once Aumua found his range, the lethal driving maul sent Dalton Papalii over after Matera was yellow carded for consistent infringing at the breakdown.

The 22-0 halftime margin could easily have been double that.

Equally, as the All Blacks opened up and chased points once well on top their turnovers increased. The scrum, too, conceded the odd penalty. To hover over those points is to be picky, though.

Seven tests into their arduous campaign and there can be little doubt the All Blacks have struck a rich vein of form.

The Pumas sure won't be enthralled about meeting them again in six days.