With 1.5 million coronavirus cases and 92,000 deaths in the US, President Donald Trump has bizarrely claimed that the case count is a "badge of honour".

Trump made the comment to reporters during a Cabinet meeting, his first since the pandemic hit the US.

"By the way, you know when you say that we lead in cases, that's because we have more testing than anybody else," he said.

"So when we have a lot of cases," continued Trump, "I don't look at that as a bad thing, I look at that as, in a certain respect, as being a good thing because it means our testing is much better. 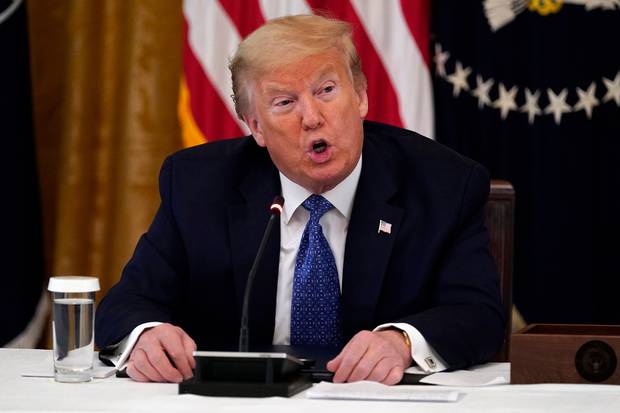 President Donald Trump speaks during a Cabinet Meeting in the East Room of the White House. (Photo / AP)

"It's a great tribute to the testing and all of the work that a lot of professionals have done."

The comments drew outrage from Americans struggling with the fallout from the pandemic.

People are fighting for their lives. Workers are losing their jobs. Our economy is crumbling.

President Trump has repeatedly failed to get this country enough tests and still doesn’t have a plan.

And he is trying to spin this response as a “badge of honor?” I don’t think so. https://t.co/pq1YCbZ7fw

Today @realDonaldTrump declared the 1.5M cases (and 92k deaths) is a #badgeofhonor. His heartless lack of leadership has killed tens of thousands, and he’s proud of it. He’s failing on #TestAndTrace and #PPE. pic.twitter.com/uZGrqAkDyt

The President's claim that the US is leading the world in testing is not correct.

In fact an Oxford University survey shows the US is 15th in per-capita testing rates, behind Russia, Italy and Germany, which have all been hit hard by the virus.

New Zealand's per-capita testing is the 8th best in the world.

The statements come a day after Trump admitted to taking hydroxychloroquine, an anti-malaria drug, to ward off coronavirus despite warnings from the FDA.

Trump repeatedly has pushed the malaria drug hydroxychloroquine with or without the antibiotic azithromycin, but no large, rigorous studies have found them safe or effective for preventing or treating Covid-19. They can cause heart rhythm problems and other side effects.

The Food and Drug Administration has warned against the drug combo and said hydroxychloroquine should only be used for coronavirus in formal studies.

Trump also lashed out at House Speaker Nancy Pelosi, calling her a "sick woman" who has "a lot of mental problems" after she questioned Trump's use of the drug because he is 73 and falsely labelled him "morbidly obese".