A spot on the Atlantic City Boardwalk where movie stars, athletes and rock stars used to party — and a future president honed his instincts for bravado and hype — was reduced to a dusty pile of rubble today.

The former Trump Plaza casino was imploded after falling into such disrepair that chunks of the building began peeling off and crashing to the ground.

A series of loud explosions around 9am Wednesday (Thursday NZT) rocked the building, which started to collapse in a wave from back to front until it plunged straight down in a giant cloud of dust that enveloped the beach and Boardwalk. Overall, it took the structure less than 20 seconds to implode.

"I got chills," Atlantic City Mayor Marty Small said. "This is a historic moment. It was exciting."

He estimated the remaining pile of rubble is about eight stories tall, and would be removed by June 10. Some of it could be used by environmentalists interested in building an artificial fishing reef off the coast of Atlantic City.

Additional parts of the casino-hotel complex fronting on the Boardwalk and on Pacific Avenue, the main road along the row of casinos, were not included in the implosion. They will be demolished in the near future using heavy equipment, not explosives.

The removal of the one-time jewel of former president Donald Trump's casino empire clears the way for a prime development opportunity on the middle of the Boardwalk, where the Plaza used to market itself as "Atlantic City's centrepiece".
"The way we put Trump Plaza and the city of Atlantic City on the map for the whole world was really incredible," said Bernie Dillon, the events manager for the casino from 1984 to 1991.

"Everyone from Hulk Hogan to Mick Jagger and Keith Richards, it was the whole gamut of personalities. One night before a Tyson fight I stopped dead in my tracks and looked about four rows in as the place was filling up, and there were two guys leaning in close and having a private conversation: Jack Nicholson and Warren Beatty.

"It was like that a lot: you had Madonna and Sean Penn walking in, Barbra Streisand and Don Johnson, Muhammad Ali would be there, Oprah sitting with Donald ringside," he recalled. "It was a special time. I'm sorry to see it go."

Although the former president built it, a different billionaire, Carl Icahn, acquired the two remaining Trump casinos in 2016 from the last of their many bankruptcies and owned the building. 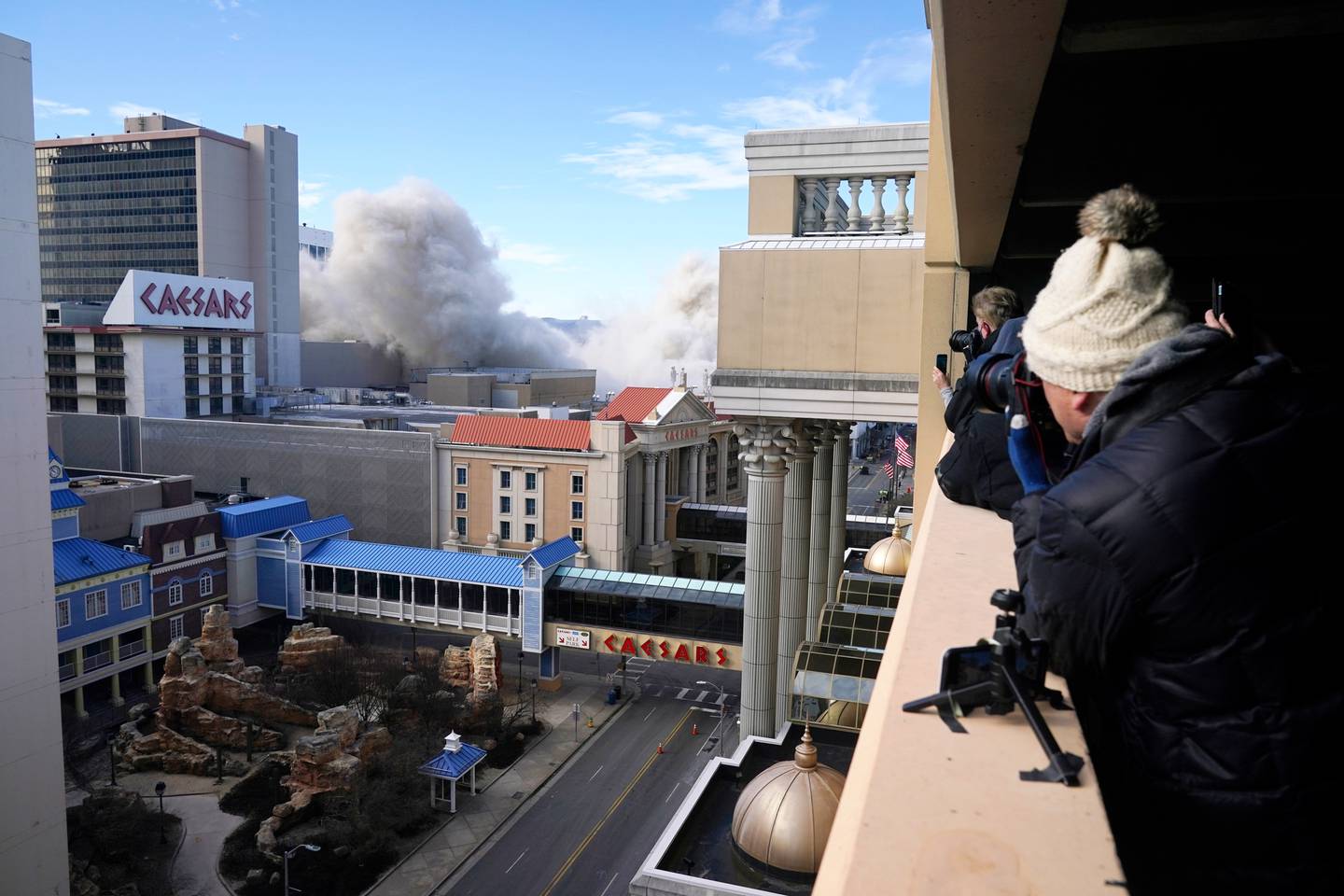 Trump Plaza collapsed in a wave from back to front until it plunged straight down in a giant cloud of dust. Photo / AP

The mayor proposed using the demolition as a fundraiser for the Boys And Girls Club of Atlantic City, and began an auction for the right to press the button that would bring the structure down.

But Icahn - a donor and former special economic adviser to Trump - objected on safety and liability issues, and got the auction house to halt the bids.

Opened in 1984, when Trump was a real estate developer in his pre-politics days, Trump Plaza was for a time the most successful casino in Atlantic City. It was the place to be when mega-events such as a Mike Tyson boxing match or a Rolling Stones concert was held next door in Boardwalk Hall. 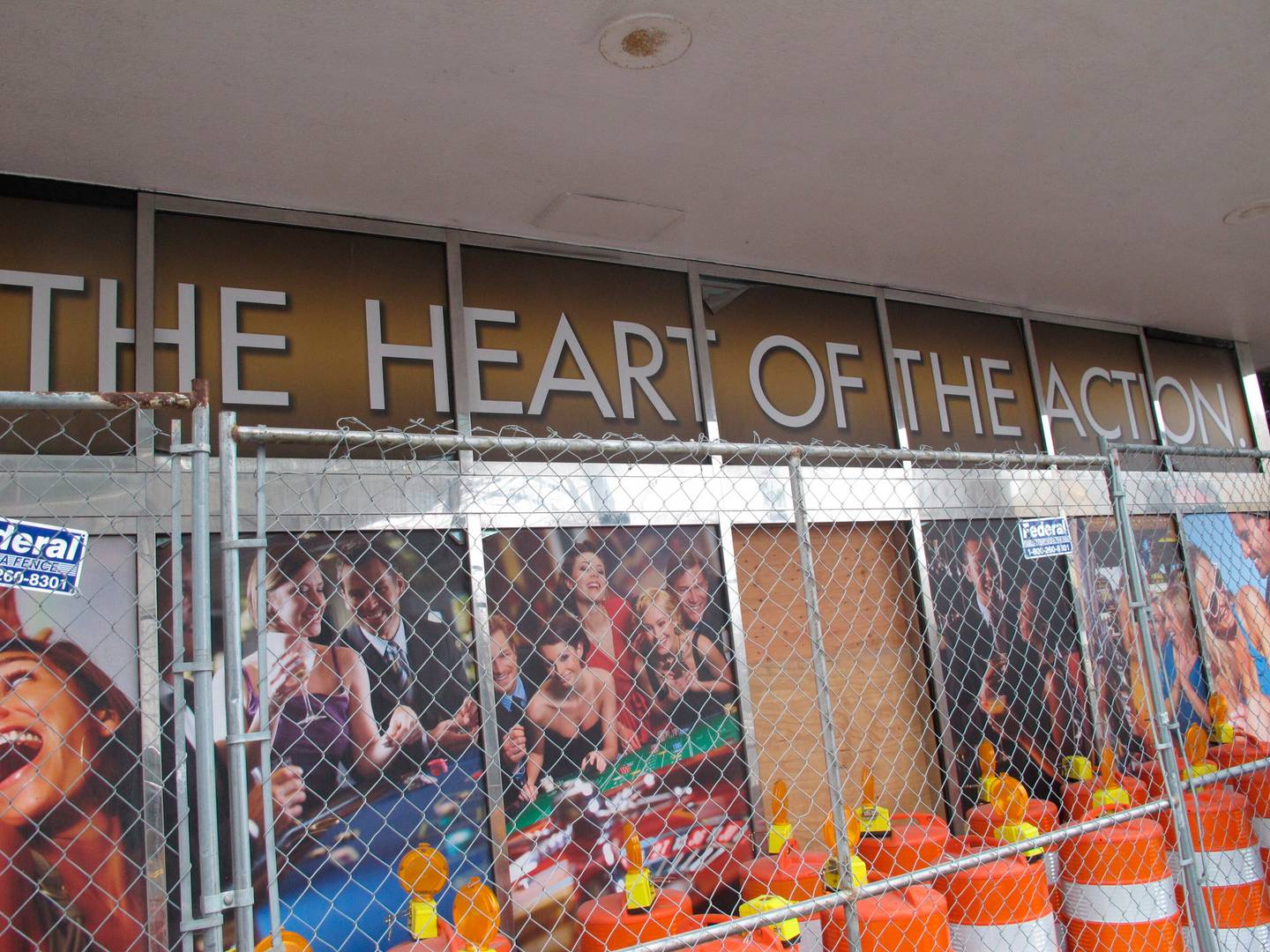 A facade of the former Trump Plaza casino in Atlantic City the day before its demolition. (Photo / AP)

Ron Gatewood, a food and beverage worker at Trump Plaza from 1986 until its closing in 2014, brought food and drinks to stars including Aretha Franklin, Luther Vandross and Barry White in their hotel rooms.

"They were very down-to-earth people," Gatewood recalled. "They never made you feel less-than. They tipped very well. Well, some did, anyway."

The casino even had a cameo in the film Ocean's Eleven. When George Clooney and Brad Pitt recruited actor Bernie Mac's character to help with a Las Vegas casino heist, they plucked him from Trump Plaza, where he was a dealer.

Bob McDevitt, president of the main casino workers' union, said the place oozed glamour and buzz when it first opened.

But things began to sour for Trump Plaza when Donald Trump opened the nearby Trump Taj Mahal in 1990, with crushing debt loads that led the company to pour most of its resources - and cash - into the shiny new hotel and casino.

"The moment that the Taj Mahal opened up, it began a decline for the Plaza," McDevitt said. "In order to make sure the Taj Mahal was successful, they shipped all the high rollers from Trump Plaza and Trump's Castle to the Taj, and they really didn't invest in the Plaza much." 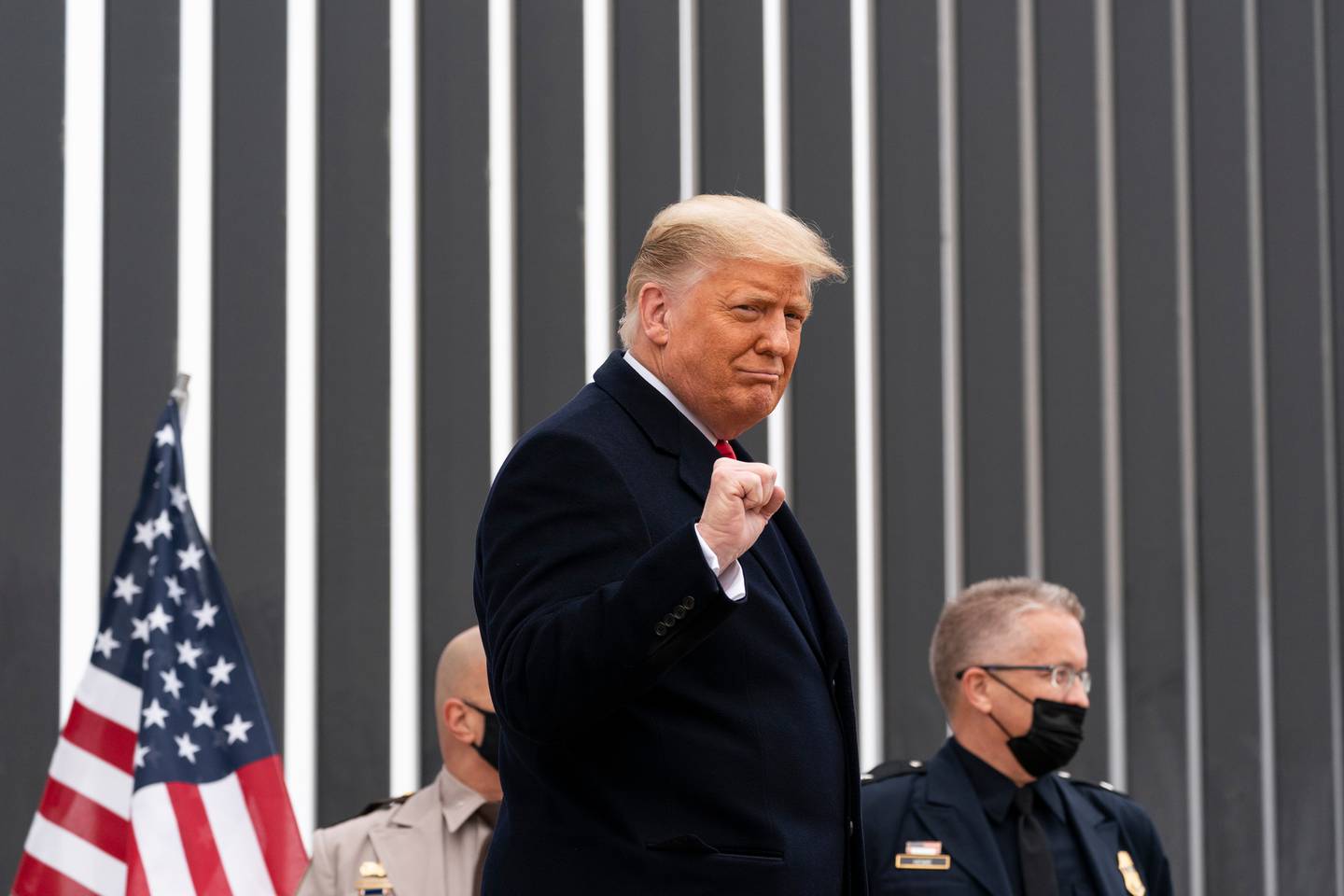 Trump Plaza was opened in 1984, when the former president was a real estate developer. (Photo / AP)

The Trump Taj Mahal, one of the casinos acquired by Icahn, has since reopened under new ownership as the Hard Rock.

Trump Plaza was the last of four Atlantic City casinos to close in 2014, victims of an oversaturated casino market both in the New Jersey city and in the larger northeast. There were 12 casinos at the start of 2014; there now are nine.

By the time it closed, Trump Plaza was the poorest-performing casino in Atlantic City, taking in as much money from gamblers in 8.5 months as the market-leading Borgata did every two weeks.

Short-term plans call for the site to be paved to provide new parking while a permanent development project is considered.