New CCTV footage has emerged of Minneapolis Police officers in a violent struggle with George Floyd in the back of their car before he was later pinned to the ground and died.

While the 46-year-old father-of-two cannot explicitly be seen in the video from May 25, one officer leans into the back of the car and his legs shuffle around as he visibly struggles with someone in the back seat.

The officers then convene on one side of the car where Floyd was held down onto the road.

The video was shared on Instagram on Sunday by American civil rights and Black Lives Matter activist Shaun King.

The post is captioned: "It's all coming together. Police were in the car beating the s*** out of George Floyd. One stands watch, while the others attacked him."

The four officers were identified last Wednesday as Derek Chauvin, Tou Thao, J Alexander Kueng and Thomas K Lane. They have all been sacked by Police Chief Medaria Arradondo.

The white police officer was filmed by bystanders with his knee on Floyd's neck for several minutes.

Derek Chauvin, left, has been arrested and charged with murder after he was filmed kneeling on George Floyd's neck, right. (Photos / Supplied)

Floyd could be heard saying he couldn't breathe before he became limp and unresponsive.

Chauvin also was accused of ignoring another officer who expressed concerns about Floyd, a black man, as he lay handcuffed on the ground.

Police were called after a grocery store employee claimed Floyd, who had worked as a security guard at a local Latin bistro prior to Covid-19 closures, had tried to pay using a counterfeit $20 note, considered a case of alleged "forgery in progress".

He told CBS: "We don't understand how that is not first-degree murder."

Multiple videos have since emerged from the scene at the intersection of East 38th St and Chicago Ave in Minneapolis.

One shared by Crump shows the officers either pinning Floyd down or standing around.

"He was clearly not resisting," Crump said.

"They need to be held accountable … we've got one (Derek Chauvin), now three more to go."

THE VIDEO EVIDENCE IS CLEAR! Why did THREE officers need to kneel on #GeorgeFloyd, when he was clearly NOT RESISTING?! They need to be held accountable... We've got one (Derek Chauvin), now three more to go. #JusticeForGeorgeFloyd #JusticeForGeorge pic.twitter.com/KHg2k9bcK2

According to the complaint, Chauvin had his knee on Floyd's neck for eight minutes, including nearly three minutes after he stopped moving and talking.

An autopsy said the combined effects of being restrained, potential intoxicants in Floyd's system and his underlying health issues, including heart disease, likely contributed to his death.

Chauvin's wife has filed for divorce.

The police chief told CNN on Sunday the other three officers were "complicit" in the death.

"In my mind, this was a violation of humanity," Arradondo said. 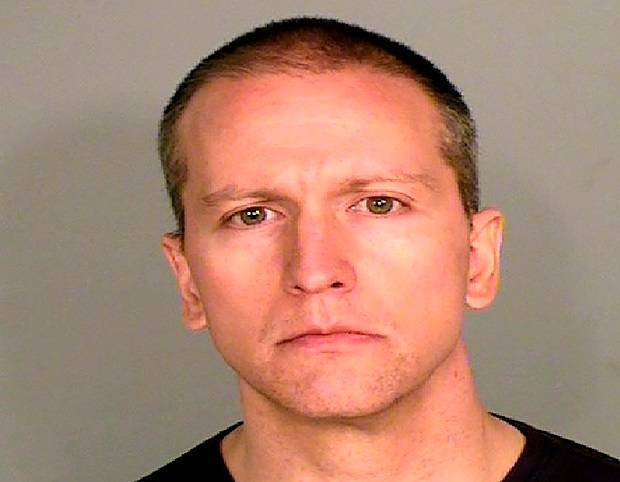 Former Minneapolis police officer Derek Chauvin. (Photo / AP)
"This was a violation of the oath that the majority of the men and women that put this uniform on, this goes absolutely against it. This is contrary to what we believe in."

All four officers involved in the death of George Floyd were “complicit," including the three who haven't been arrested, says Minneapolis Police Chief Medaria Arradondo, responding to a question asked by @sarasidnerCNN on behalf of Floyd’s brother. https://t.co/JiE3Mx8xF2 pic.twitter.com/yalvaWfpDV

The chief also directly addressed the family of George Floyd.

"I would say to the Floyd family that I am absolutely devastatingly sorry for their loss," he said.

"If I could do anything to bring Mr Floyd back, I would do that. I would move heaven and Earth to do that. So I'm very sorry."

Protests against police brutality continue across the country.