The US Supreme Court has ended the nation's constitutional protections for abortion that had been in place nearly 50 years in a decision by its conservative majority to overturn Roe v Wade. The outcome is expected to lead to abortion bans in roughly half the states and has sparked a furious reaction.

The court's decision, unthinkable just a few years ago, was the culmination of decades of efforts by abortion opponents, made possible by an emboldened right side of the court that has been fortified by three appointees of former President Donald Trump.

Both sides predicted the fight over abortion would continue, in state capitals and in Washington, and Justice Clarence Thomas, part of the majority, called on the court to overturn other high court rulings protecting same-sex marriage, gay sex and the use of contraceptives.

The ruling came more than a month after the stunning leak of a draft opinion by Justice Samuel Alito indicating the court was prepared to take this momentous step.

It puts the court at odds with a majority of Americans who favoured preserving Roe, according to opinion polls.

Alito, in the final opinion issued Friday (Saturday NZT), wrote that Roe and Planned Parenthood v Casey, the 1992 decision that reaffirmed the right to abortion, were wrong the days they were decided and must be overturned.

"We therefore hold that the Constitution does not confer a right to abortion. Roe and Casey must be overruled, and the authority to regulate abortion must be returned to the people and their elected representatives," Alito wrote, in an opinion that was very similar to the leaked draft.

Authority to regulate abortion rests with the political branches, not the courts, Alito wrote. 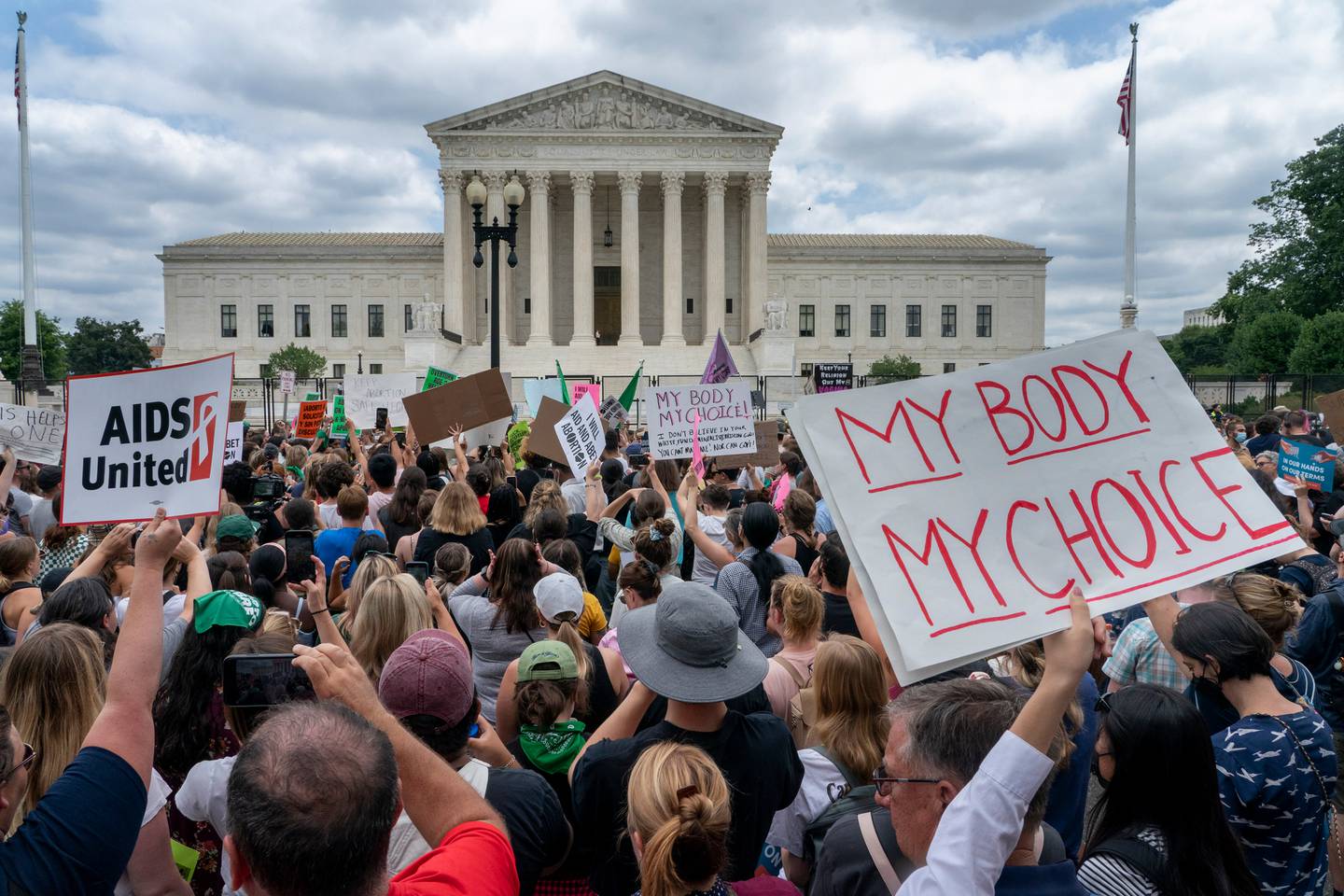 The vote was 6-3 to uphold the Mississippi law, but Chief Justice John Roberts didn't join his conservative colleagues in overturning Roe. He wrote that there was no need to overturn the broad precedents to rule in Mississippi's favour.

Justices Stephen Breyer, Sonia Sotomayor and Elena Kagan — the diminished liberal wing of the court — were in dissent.

"With sorrow — for this Court, but more, for the many millions of American women who have today lost a fundamental constitutional protection—we dissent," they wrote, warning that abortion opponents now could pursue a nationwide ban "from the moment of conception and without exceptions for rape or incest".

US President Joe Biden said the decision marked "a sad day for the court and the country".

"Now with Roe gone, let's be very clear, the health and life of women across this nation are now at risk," he said from the White House. "The court has done what it's never done before — expressly taking away a constitutional right that is so fundamental to so many Americans," he said.

US Attorney General Merrick Garland said the Justice Department "will work tirelessly to protect and advance reproductive freedom". He said in a statement that in addition to protecting providers and those seeking abortions in states where it is legal "we stand ready to work with other arms of the federal government that seek to use their lawful authorities to protect and preserve access to reproductive care".

In particular, Garland said that the federal Food and Drug Administration has approved the use of Mifepristone for medication abortions.

"States may not ban Mifepristone based on disagreement with the FDA's expert judgment about its safety and efficacy," Garland said.

More than 90 per cent of abortions take place in the first 13 weeks of pregnancy, and more than half are now done with pills, not surgery, according to data compiled by the Guttmacher Institute, a research group that supports abortion rights. 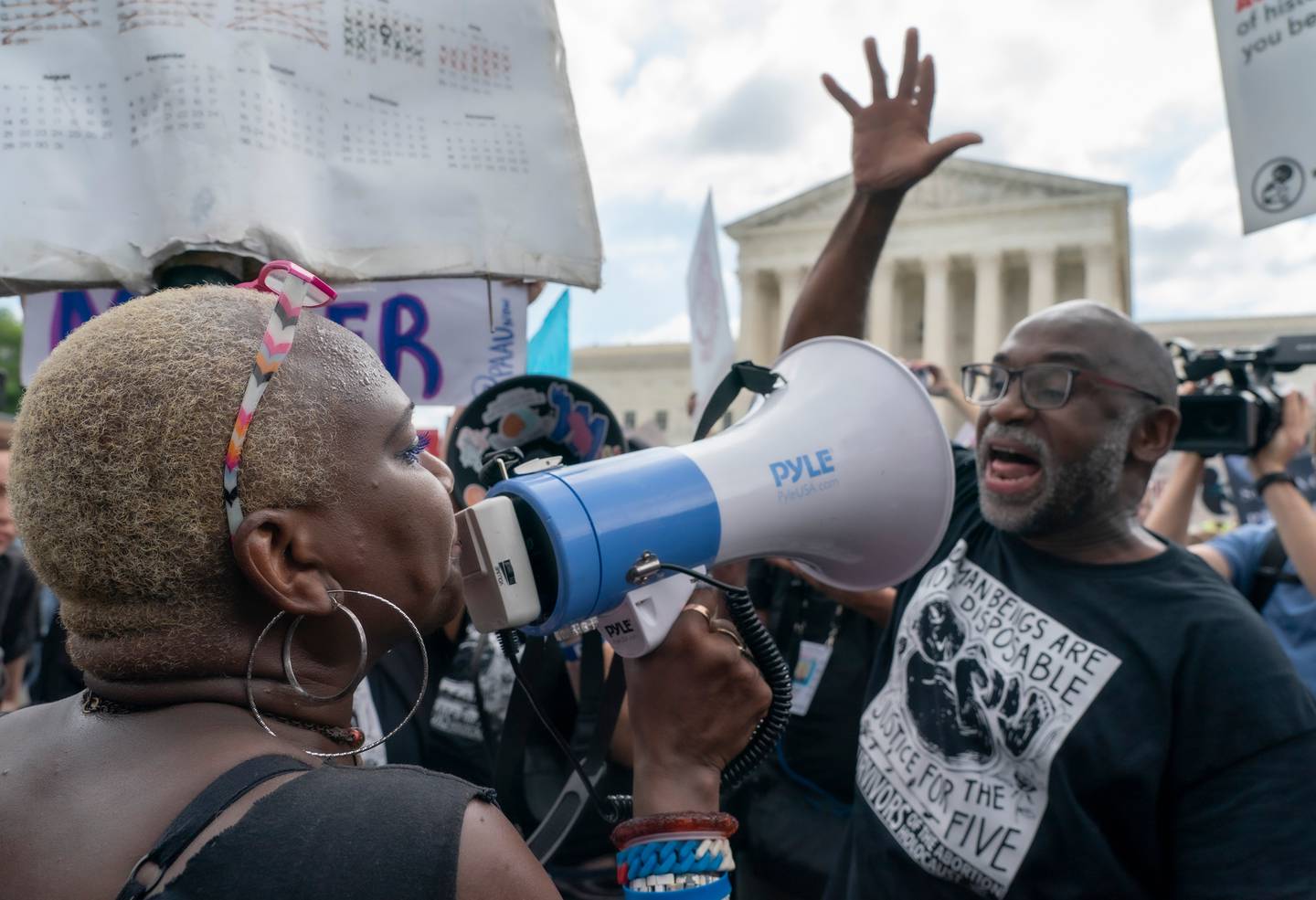 Abortion-rights and anti-abortion protesters face off in front of the US Supreme Court. Photo / AP

Mississippi's only abortion clinic, which is at the centre of the case, continued to see patients Friday. Outside, men used a bullhorn to tell people inside the clinic that they would burn in hell. Clinic escorts wearing colourful vests used large stereo speakers to blast Tom Petty's "I Won't Back Down" at the protesters.

Mississippi is one of 13 states, mainly in the South and Midwest, that already have laws on the books that ban abortion in the event Roe is overturned. Another half-dozen states have near-total bans or prohibitions after 6 weeks of pregnancy, before many women know they are pregnant.

In roughly a half-dozen other states, the fight will be over dormant abortion bans that were enacted before Roe was decided in 1973 or new proposals to sharply limit when abortions can be performed, according to Guttmacher.

In Wisconsin, which has an 1849 abortion ban on the books, Planned Parenthood immediately halted all scheduled abortions at its clinics in Madison and Milwaukee following the high court's ruling. 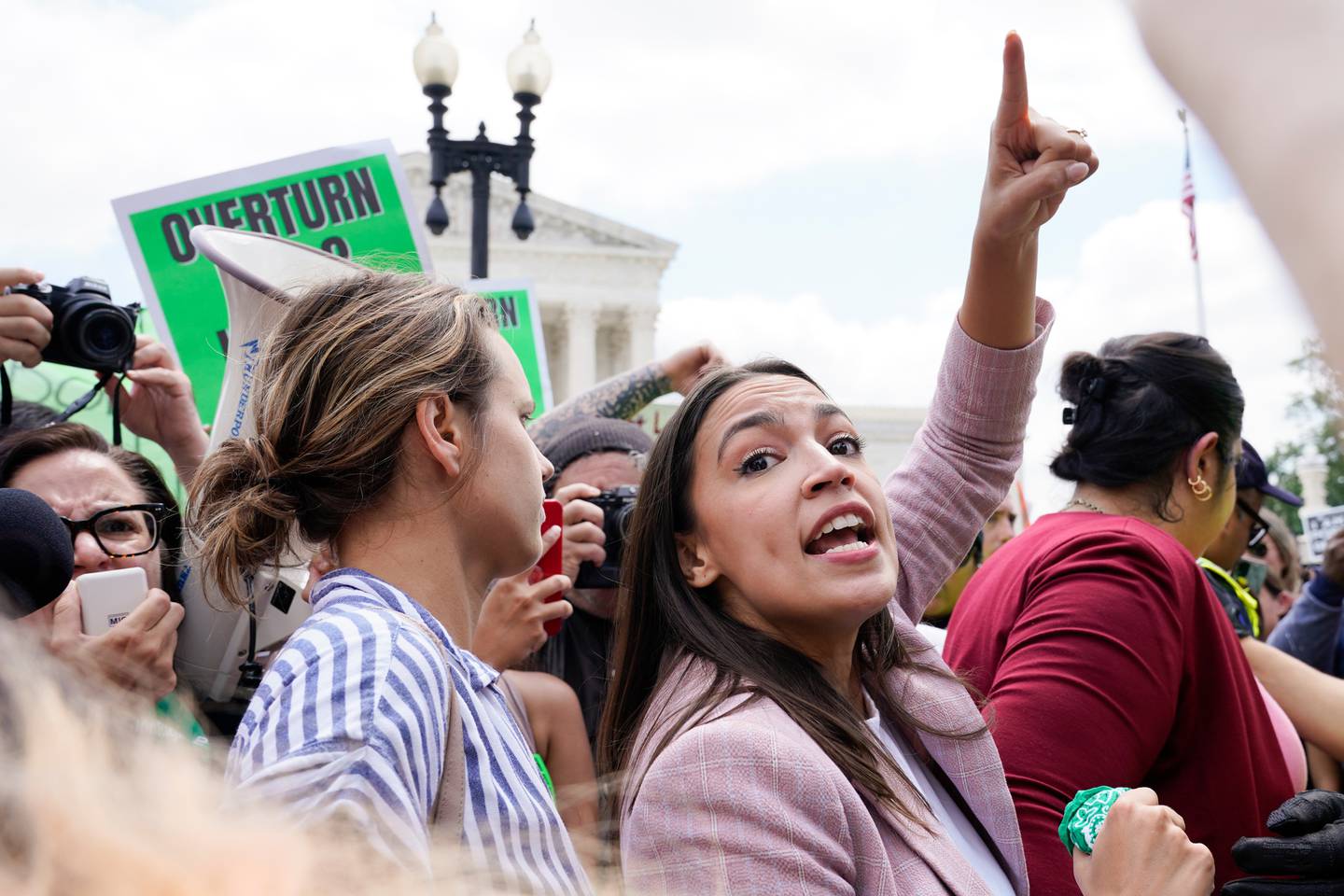 The decision came against a backdrop of public opinion surveys that find a majority of Americans oppose overturning Roe and handing the question of whether to permit abortion entirely to the states. Polls conducted by The Associated Press-NORC Centre for Public Affairs Research and others also have consistently shown about 1 in 10 Americans want abortion to be illegal in all cases. A majority are in favour of abortion being legal in all or most circumstances, but polls indicate many also support restrictions especially later in pregnancy.

The Biden administration and other defenders of abortion rights have warned that a decision overturning Roe also would threaten other high court decisions in favour of gay rights and even potentially, contraception.

The liberal justices made the same point in their joint dissent: The majority "eliminates a 50-year-old constitutional right that safeguards women's freedom and equal station. It breaches a core rule-of-law principle, designed to promote constancy in the law. In doing all of that, it places in jeopardy other rights, from contraception to same-sex intimacy and marriage. And finally, it undermines the Court's legitimacy."

And Thomas, the member of the court most open to jettisoning prior decisions, wrote a separate opinion in which he explicitly called on his colleagues to put the Supreme Court's same-sex marriage, gay sex and even contraception cases on the table.

But Alito contended that his analysis addresses abortion only. "Nothing in this opinion should be understood to cast doubt on precedents that do not concern abortion," he wrote.

Whatever the intentions of the person who leaked Alito's draft opinion, the conservatives held firm in overturning Roe and Casey. 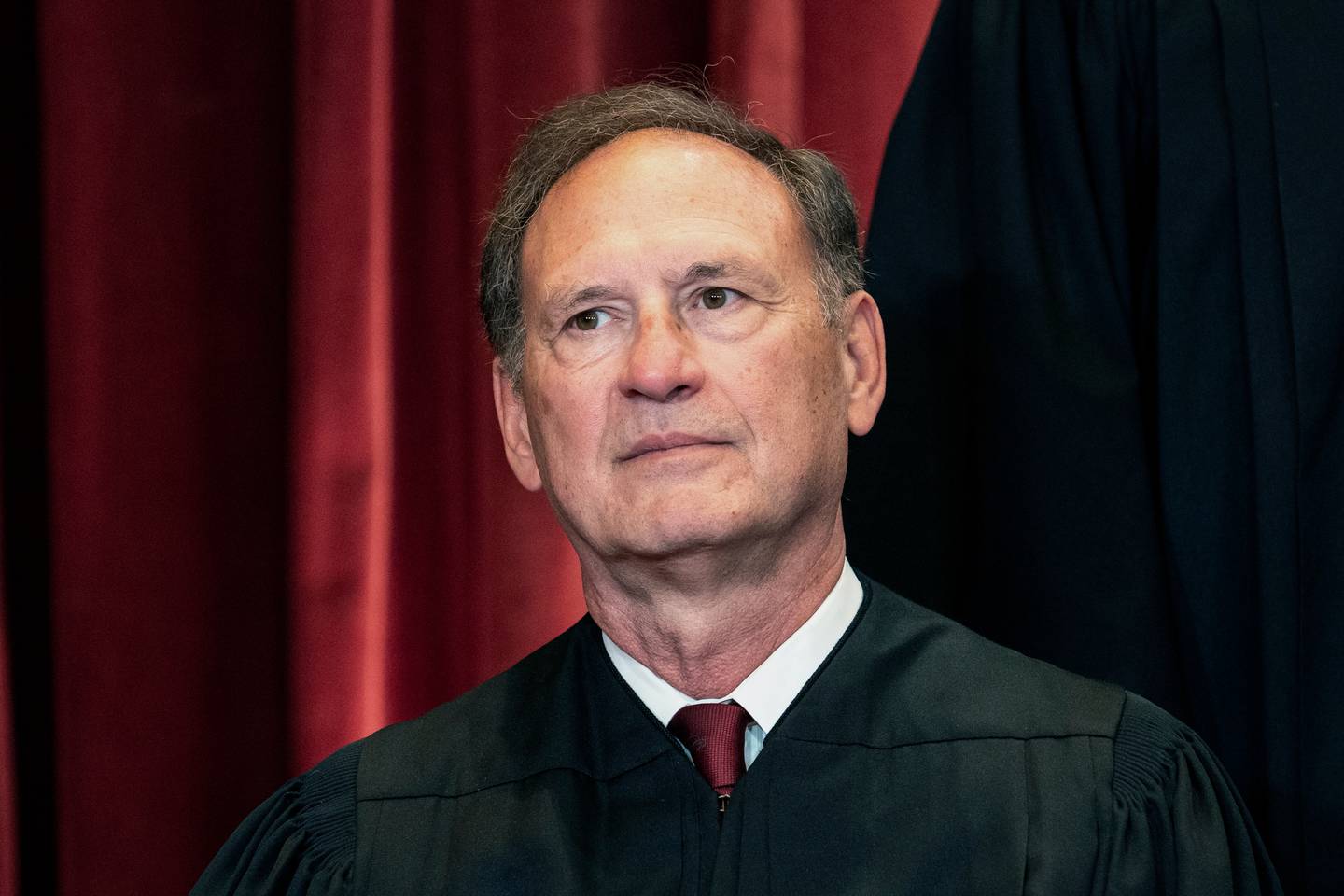 In his opinion, Alito dismissed the arguments in favour of retaining the two decisions, including that multiple generations of American women have partly relied on the right to abortion to gain economic and political power.

Changing the makeup of the court has been central to the anti-abortion side's strategy, as the dissenters archly noted. "The Court reverses course today for one reason and one reason only: because the composition of this Court has changed," the liberal justices wrote.

Mississippi and its allies made increasingly aggressive arguments as the case developed, and two high-court defenders of abortion rights retired or died. The state initially argued that its law could be upheld without overruling the court's abortion precedents.

Then-Governor Phil Bryant signed the 15-week measure into law in March 2018, when Justices Anthony Kennedy and Ruth Bader Ginsburg were still members of a five-justice majority that was mainly protective of abortion rights.

By early summer, Kennedy had retired and was replaced by Justice Brett Kavanaugh a few months later. The Mississippi law was blocked in lower federal courts.

But the state always was headed to the nation's highest court. It did not even ask for a hearing before a three-judge panel of the 5th US Circuit Court of Appeals, which ultimately held the law invalid in December 2019.

By early September 2020, the Supreme Court was ready to consider the state's appeal.

The court scheduled the case for consideration at the justices' private conference on September 29. But in the intervening weeks, Ginsburg died and Barrett was quickly nominated and confirmed without a single Democratic vote.

The stage now was set, although it took the court another half year to agree to hear the case.

By the time Mississippi filed its main written argument with the court in the summer, the thrust of its argument had changed and it was now calling for the wholesale overruling of Roe and Casey. 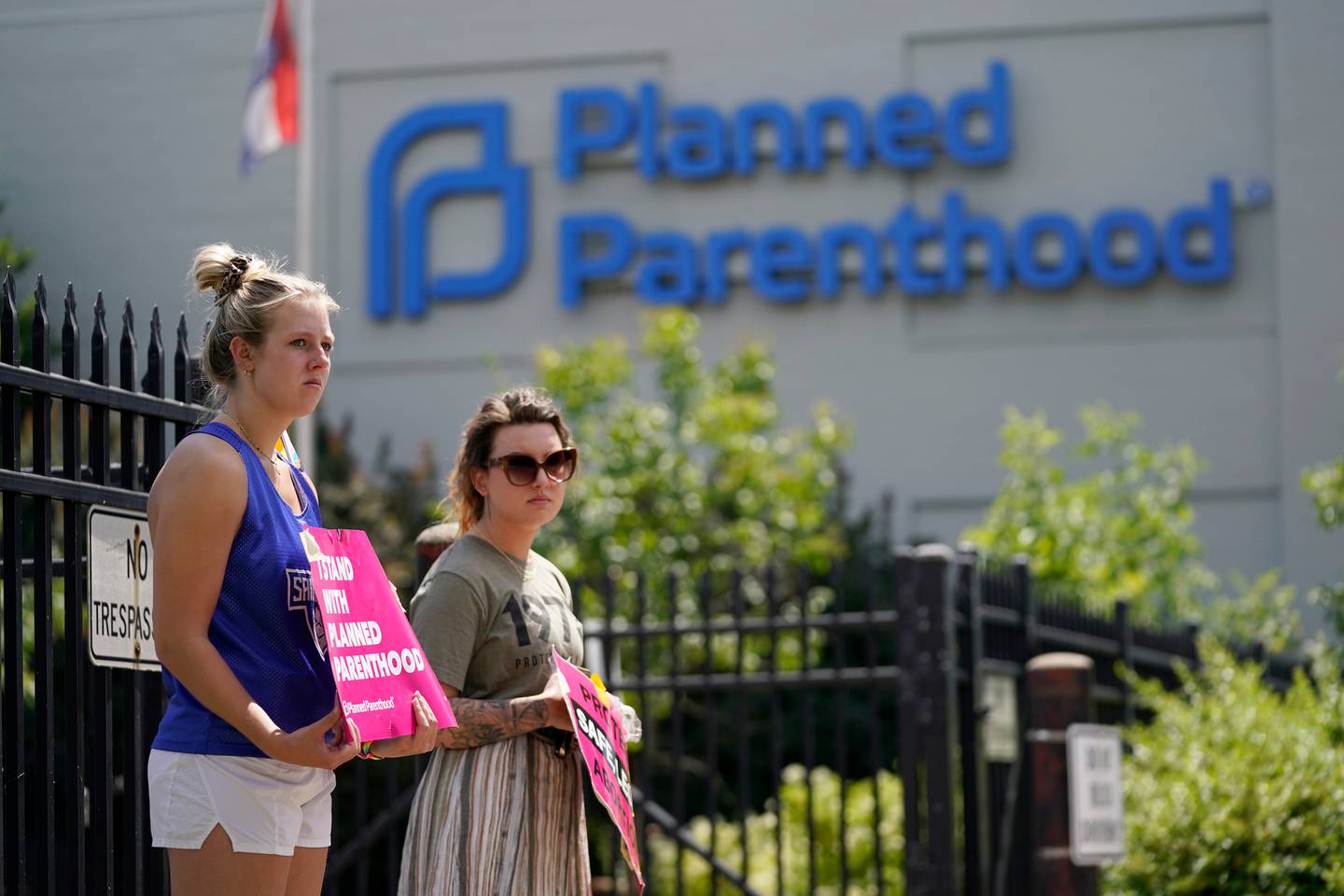 The first sign that the court might be receptive to wiping away the constitutional right to abortion came in late summer, when the justices divided 5-4 in allowing Texas to enforce a ban on the procedure at roughly six weeks, before some women even know they are pregnant. That dispute turned on the unique structure of the law, including its enforcement by private citizens rather than by state officials, and how it can be challenged in court.

Roberts was among the dissenters.

Then in December, after hearing additional arguments over whether to block the Texas law known as SB 8, the court again declined to do so, also by a 5-4 vote. "The clear purpose and actual effect of SB 8 has been to nullify this Court's rulings," Roberts wrote, in a partial dissent.

In their Senate hearings, Trump's three high-court picks carefully skirted questions about how they would vote in any cases, including about abortion.

But even as Democrats and abortion rights supporters predicted Kavanaugh and Gorsuch would vote to upend abortion rights if confirmed, the two left at least one Republican senator with a different impression. Senator Susan Collins of Maine predicted Gorsuch and Kavanaugh wouldn't support overturning the abortion cases, based on private conversations she had with them when they were nominees to the Supreme Court.