Democrats' momentum for a fresh drive to quickly impeach outgoing President Donald Trump gained support today as a top Republican said the president's role in the deadly riot at the Capitol by a violent mob of Trump supporters was worthy of rebuke.

Senator Pat Toomey, Republican, Philadelphia, said he believed Trump had committed "impeachable offences". But he stopped short of saying whether he would vote to remove the president from office at the conclusion of a Senate trial if the House sent over articles of impeachment.

"I don't know what they are going to send over and one of the things that I'm concerned about, frankly, is whether the House would completely politicise something," Toomey said today on Fox News, speaking of the Democratic-controlled House.

The new Democratic effort to stamp Trump's presidential record — for the second time and days before his term ends — with the indelible mark of impeachment gained momentum today.

Representative David Cicilline, Democrat, Rhode Island, a leader of the House effort to draft impeachment articles — or charges — accusing Trump of inciting insurrection, said his group had grown to include 185 co-sponsors.

Lawmakers plan to formally introduce the proposal on Monday (Tuesday NZT) in the House, where articles of impeachment must originate. A vote could be possible by Wednesday — exactly one week before Democrat Joe Biden becomes president at noon on January 20. 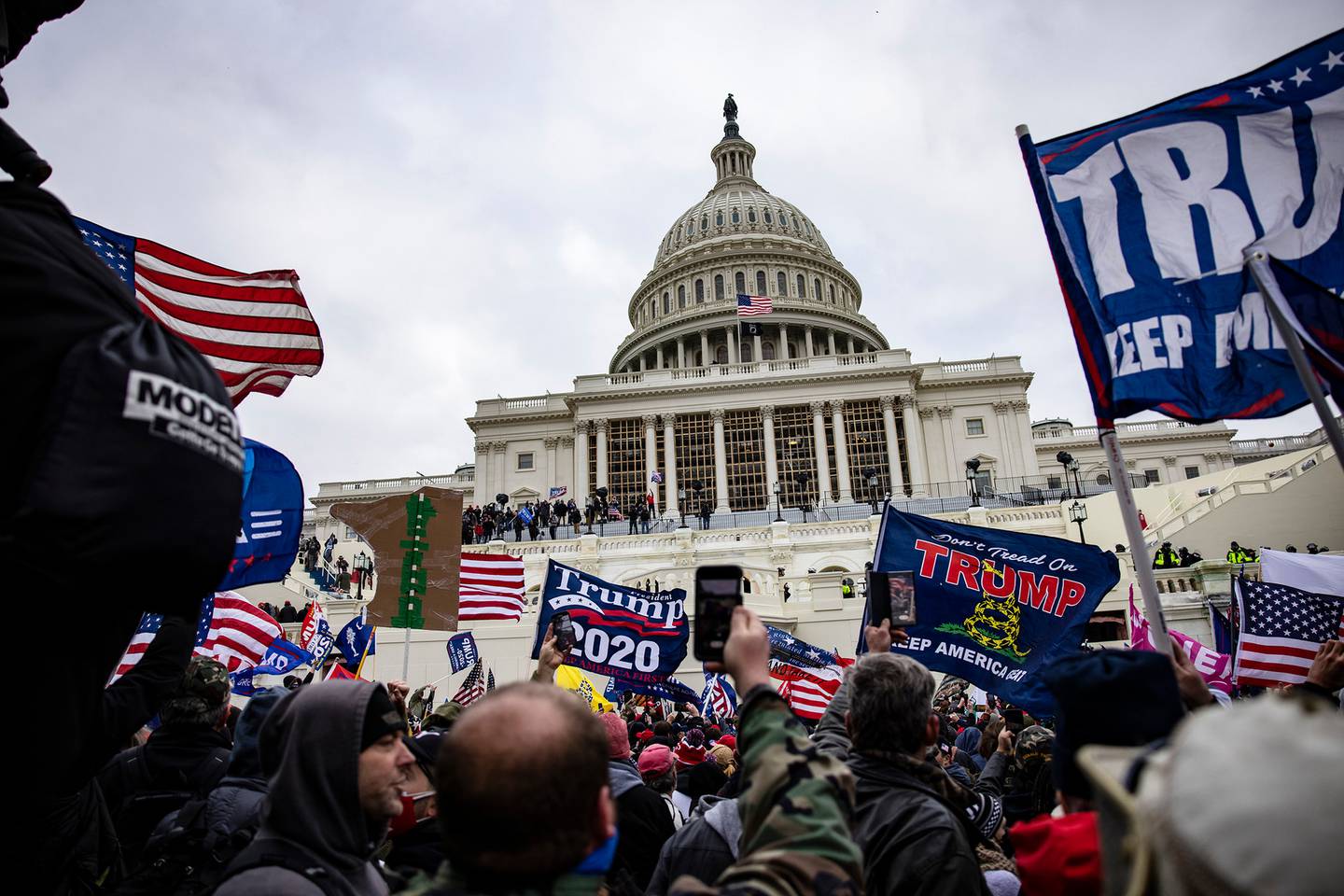 Pro-Trump protesters gather in front of the US Capitol Building on January 6 before a mob stormed the Capitol, breaking windows and clashing with police officers. Photo / Getty Images

The articles, if passed by the House, could then be transmitted to the Senate for a trial, with senators acting as jurors who would ultimately vote on whether to acquit or convict Trump. If convicted, Trump would be removed from office and succeeded by the vice president.

House Speaker Nancy Pelosi, however, shared no details about her party's plans as she addressed her hometown San Francisco constituents during an online video conference on today.

"Justice will be done. Democracy will prevail. And America will be healed," she said. "But it is a decision that we have to make."

A violent and largely white mob of Trump supporters overpowered police, broke through security lines and rampaged through the Capitol on Wednesday (Thursday NZT), forcing lawmakers to scatter as they were putting the final, formal touches on Biden's victory over Trump in the Electoral College.

The crowd surged to the domed symbol of American democracy following a rally near the White House, where Trump repeated his bogus claims that the election was stolen from him and urged his supporters to march in force toward the Capitol.

Five people, including a Capitol police officer, died as a result of the siege.

"It has been an epiphany for the world to see that there are people in our country led by this president, for the moment, who have chosen their whiteness over democracy," Pelosi said of the attack.

She added: "This cannot be exaggerated. The complicity, not only the complicity, the instigation of the president of United States, must and will be addressed."

No 4 House Democratic leader Hakeem Jeffries, of New York, reiterated support for moving against what he deemed "an act of sedition that was incited and encouraged by Donald Trump".

Speaking of Trump, Jeffries said today: "He should be impeached, convicted and thrown out of 1600 Pennsylvania Ave and forever banished to the dustbin of history."

Outrage over the attack and Trump's role in egging it on capped a divisive, chaotic presidency like few others in the nation's history. There are less than two weeks until Trump is out of office but Democrats have made clear they don't want to wait that long. 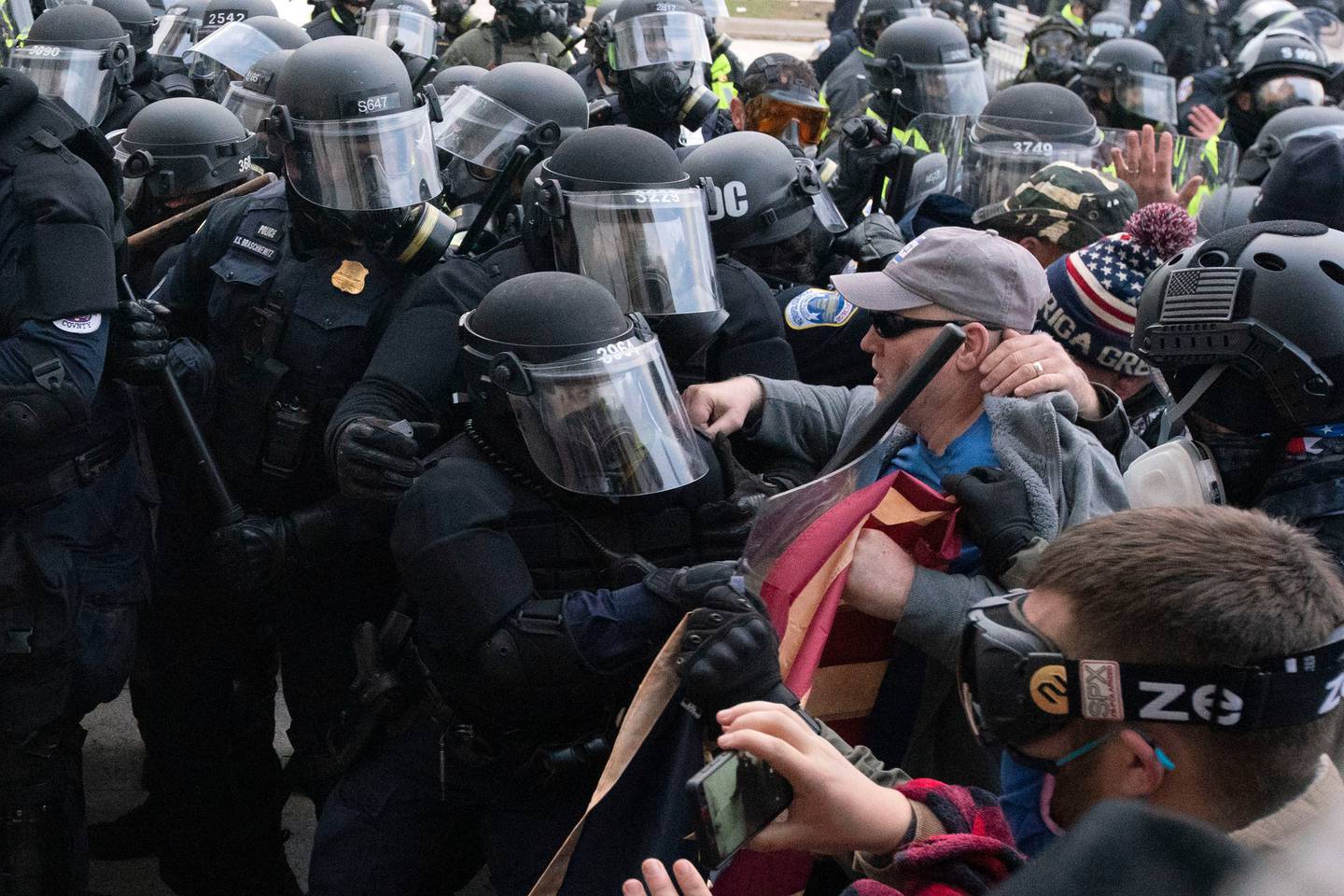 Police officers push back rioters trying to break into the US Capitol building on Thursday. Photo / AP

Trump, meanwhile, has few fellow Republicans speaking out in his defence. He's become increasingly isolated, holed up in the White House as he has been abandoned in the aftermath of the riot by many aides, leading Republicans and, so far, two Cabinet members — both women.

Senator Lisa Murkowski, Republican-Alaska, who has long voiced her exasperation with Trump's conduct in office, told the Anchorage Daily News yesterday that he simply "needs to get out".

But the Nebraska Republican also told "CBS This Morning" yesterday that he "will definitely consider" whatever articles the House sends over because he believes Trump "has disregarded his oath of office" to preserve, protect and defend the Constitution.

Biden, meanwhile, reiterated he has long viewed Trump as unfit for office. But yesterday he sidestepped a question about impeachment, saying what Congress does "is for them to decide".

After spending many weeks refusing to concede defeat in the November election, Trump promised — after the Capitol riot — to oversee a smooth transfer of power to Biden. He called for reconciliation and healing, but then announced he will not attend the inauguration — the first such presidential snub since just after the Civil War.