Religious leaders in the US and elsewhere have criticised president Donald Trump for "inflaming violence" after he posed outside a church holding a bible.

Reverend Mariann Budde, who oversees St John's Episcopal Church in Washington, said she was "outraged" by the US President's decision to use the place of worship she oversees for a photo-op during a national crisis.

She told The Washington Post that neither she nor the rector in charge of the church - which suffered fire damage during yesterday's protests - were informed of his visit in advance, nor "that they would be clearing with tear gas so they could use one of our churches as a prop".

We are followers of Jesus. In no way do we support the President’s incendiary response to a wounded, grieving nation. We stand with those seeking justice for the death of George Floyd through the sacred act of peaceful protest.

Tonight President just used a Bible and a church of my diocese as a backdrop for a message antithetical to the teachings of Jesus and everything that our church stands for. To do so, he sanctioned the use of tear gas by police officers in riot gear to clear the church yard. 1/1

Rev Budde went on to criticise the President for being photographed with the bible, accusing him of seeking to "inflame violence".

"Holding a bible, one that declares that God is love and when everything he has said and done is to enflame violence," she said. "I am beyond. We need moral leadership and he's done everything to divide us and has just used one of the most sacred symbols of the Judeo-Christian tradition."

James Martin, a Jesuit priest from New York, tweeted: "Let me be clear. This is revolting. The Bible is not a prop. A church is not a photo op. Religion is not a political tool. God is not your plaything."

"Episcopalians (Anglicans in the US) are justifiably horrified by this hijacking of God's church and scriptures. Shameful. Blasphemous," Jacobi tweeted.

It came after Trump announced he would mobilise "heavily-armed military forces" to stop the "rioting and looting" taking place in protests across the United States, declaring the riots a "total disgrace".

In a dramatic escalation of the country's national crisis, Trump said he has recommended every US governor to deploy the National Guard to "dominate the streets" to have an "overwhelming presence" to quell the violence.

"First we are ending the riots and lawlessness that has spread throughout our country. We will end it now," he said from the White House Rose Garden today.

"Today I have strongly recommended to every governor to deploy the National Guard in sufficient numbers that we dominate the streets. Mayors and governors must establish and overwhelming law enforcement presence until the violence has been quelled.

"If a city or state refuses to take the actions that are necessary to defend the life and property of their residents, then I will deploy the United States military and quickly solve the problem for them."

As an Episcopalian, I utterly disavow this use of my church as a racist prop.

As a Christian, I utterly disavow this use of scripture as a racist prop.

As a person of faith, I utterly disavow this use of God as a racist prop.

As a human being, I vow to work for love & justice. pic.twitter.com/kusCdhVvuC

Episcopalians (Anglicans in the US) are justifiably horrified by this hijacking of God’s church and scriptures. Shameful. Blasphemous. https://t.co/khvRCL0puY

He said the nation has been "gripped by professional anarchists, violent mobs, arsonists, looters, criminals, rioters, Antifa and others".

The announcement follows days of violent protests that have gripped the nation in the wake of the death of George Floyd, who died after being pinned down by white police officer Derek Chauvin for nearly nine minutes.

Trump described the protests in Washington DC as a "total disgrace", and said he would dispatch "thousands and thousands of heavily-armed soldiers, military personnel and law enforcement officers" to "stop the rioting, looting, vandalism, assaults, and the wanton destruction of property". 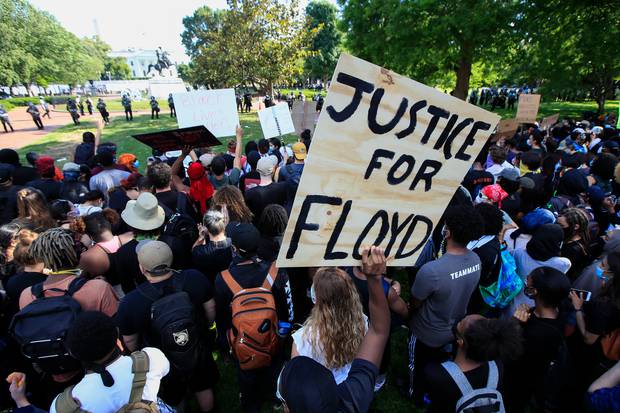 Demonstrators gather to protest against the death of George Floyd. (Photo / AP)

He also announced a strict 7pm curfew, saying "organisers of this terror … will face severe criminal penalties and lengthy sentences in jail".

After his address, Trump walked out of the White House and staged a televised walk to St John's Church, where thousands of protesters have been gathering.

It comes after Trump lashed out at US governors, calling them "weak" and saying they will look like a "bunch of jerks" if they don't start arresting people.

On a video conference with national security officials and top police he said "most of you are weak", according to leaked reports of the conversation. 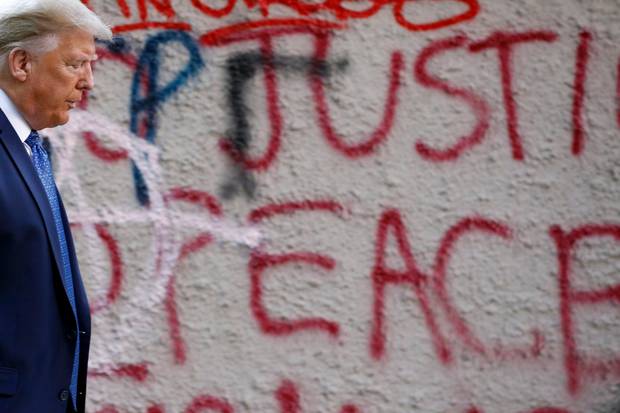 "We're doing it in Washington, DC. We're going to do something that people haven't seen before."

Trump said the governors were making themselves "look like fools" for not putting more National Guard on the streets.

He urged leaders of New York, Philadelphia and Los Angeles to crack down on protesters and suggested reviewing criminal penalties for burning the American flag.

The comments come as the US wakes in the aftermath of violent protests across the nation on Sunday night following the death of George Floyd.