In the chaotic minutes after dozens of migrants were found dead inside a tractor-trailer sweltering under the Texas sun, the driver tried to slip away by pretending to be one of the survivors, a Mexican immigration official said.

The driver along with two other men from Mexico remained in custody as the investigation continued into the tragedy that killed 53 people - the nation's deadliest smuggling episode on the US-Mexico border.

Two more people died on Wednesday as the death toll slowly climbed since the discovery of 46 bodies on Monday at the scene near auto salvage yards on the edge of San Antonio. 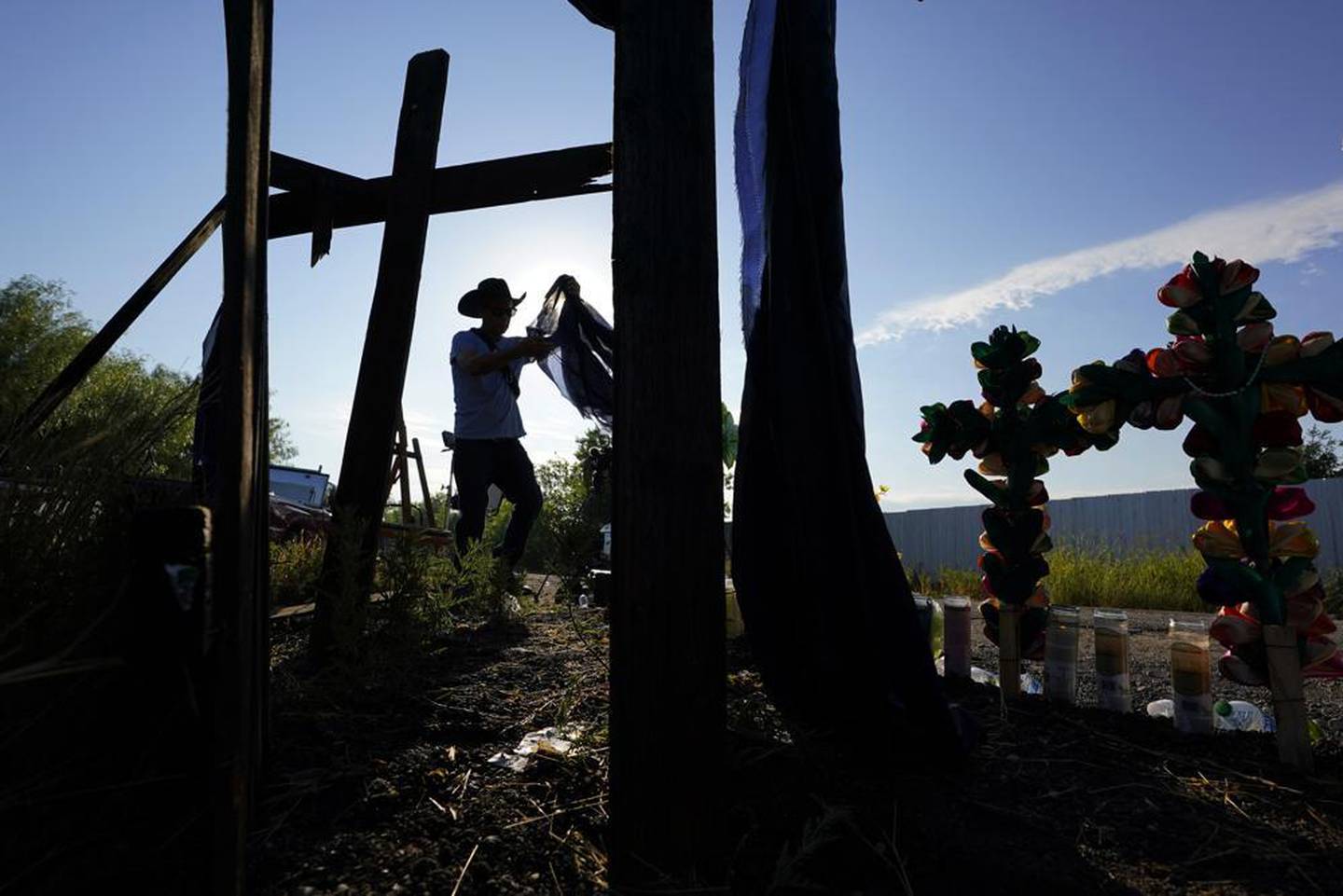 Roberto Marquez of Dallas adds a flower a makeshift memorial at the site where officials found dozens of people dead. Photo / AP

The truck had been packed with 67 people, and the dead included 27 from Mexico, 14 from Honduras, seven from Guatemala and two from El Salvador, said Francisco Garduño, chief of Mexico's National Immigration Institute.

Officials had potential identifications on 37 of the victims as of Wednesday, pending verification with authorities in other countries, according to the Bexar County Medical Examiner's Office. Forty of the victims were male, it said.

Identifying the dead has been challenging because some were found without identification documents and in one case a stolen ID. Remote villages where some of the migrants came from in Mexico and Central America have no phone service to reach family members and fingerprint data has to be shared and matched by the governments involved.

Javier Flores López's family was waiting to find out whether he was on the truck. He had returned home to see his wife and three small children in southern Mexico and was going back to Ohio where his father and a brother live and he worked in construction. He is now among the missing and his cousin, José Luis Vásquez Guzmán, is hospitalised in San Antonio, the family said.

The tragedy occurred at a time when huge numbers of migrants have been coming to the US, many of them taking perilous risks to cross swift rivers and canals and scorching desert landscapes. Migrants were stopped nearly 240,000 times in May, up by one-third from a year ago. 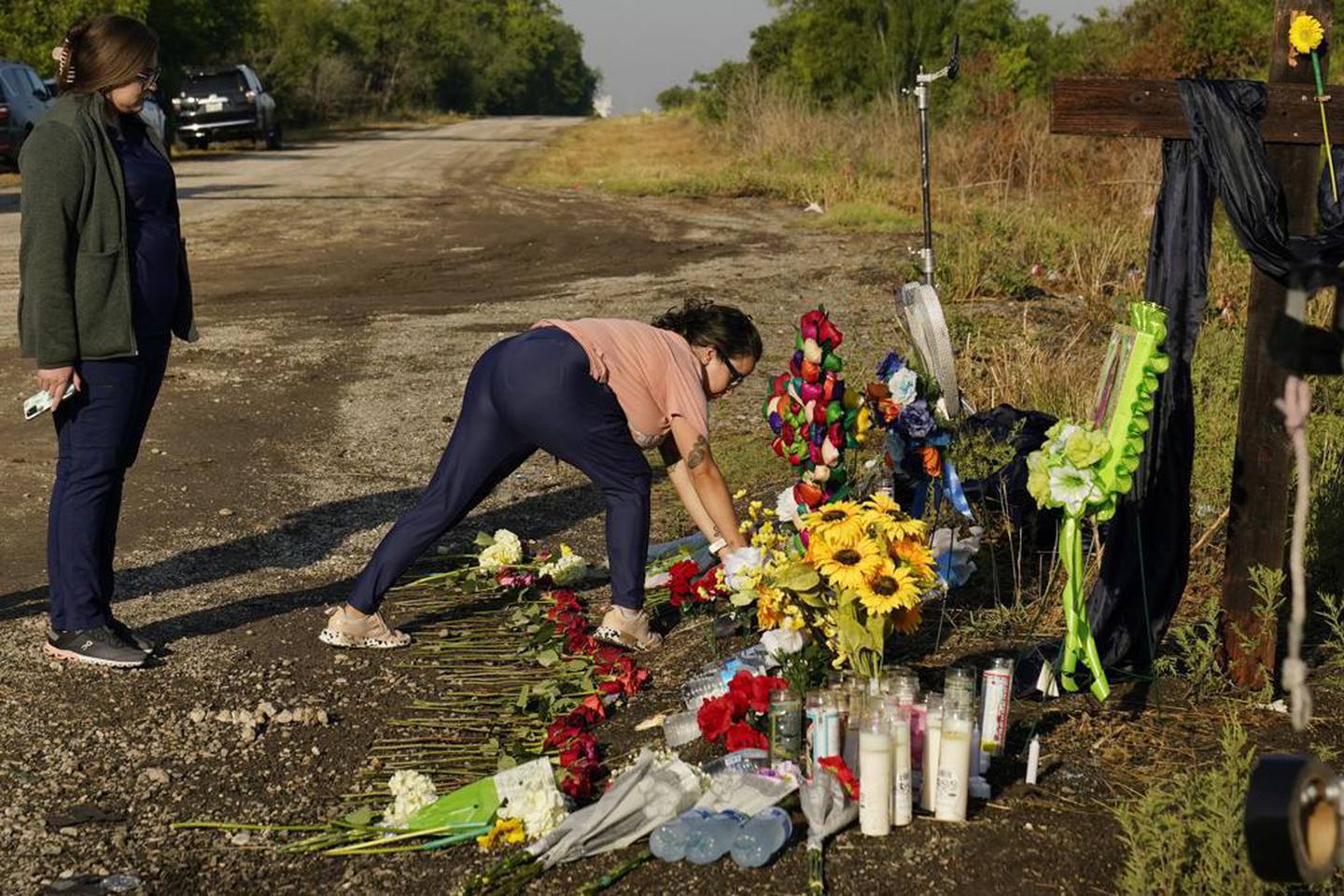 Mourners pay their respects at a makeshift memorial at the site where officials found dozens of people dead in an abandoned semitrailer. Photo / AP

While it's not clear when or where the migrants boarded the truck bound for San Antonio, Homeland Security investigators believe it was on US soil, near or in Laredo, Texas, Representative Henry Cuellar told The Associated Press.

The truck went through a Border Patrol checkpoint northeast of Laredo on Interstate 35 on Monday, Cuellar and Mexican officials confirmed. It was registered in Alamo, Texas, but had fake plates and logos, Garduño said.

Officials in Mexico also released a surveillance photo showing the driver smiling at the checkpoint during the more than two-hour trip to San Antonio.

Republican Texas Governor Greg Abbott said that state troopers would set up additional truck checkpoints on highways, but he did not say how many. In April, Abbott gridlocked the 2000km Texas border for a week by requiring every truck entering the state to underdo additional inspections as part of his ongoing fight with the Biden administration over immigration policy.

Authorities were looking into whether the truck had mechanical problems when it was left next to a railroad track. The driver was apprehended after trying to disguise himself as one of the migrants, Garduño said.

Some of the more than a dozen people transported to hospitals were found suffering from brain damage and internal bleeding, according to Rubén Minutti, the Mexico consul general in San Antonio.

Migrants typically pay $8000 to $10,000 to be taken across the border, loaded into a tractor-trailer and driven to San Antonio, where they transfer to smaller vehicles for their final destinations across the United States, said Craig Larrabee, acting special agent in charge of Homeland Security Investigations in San Antonio. 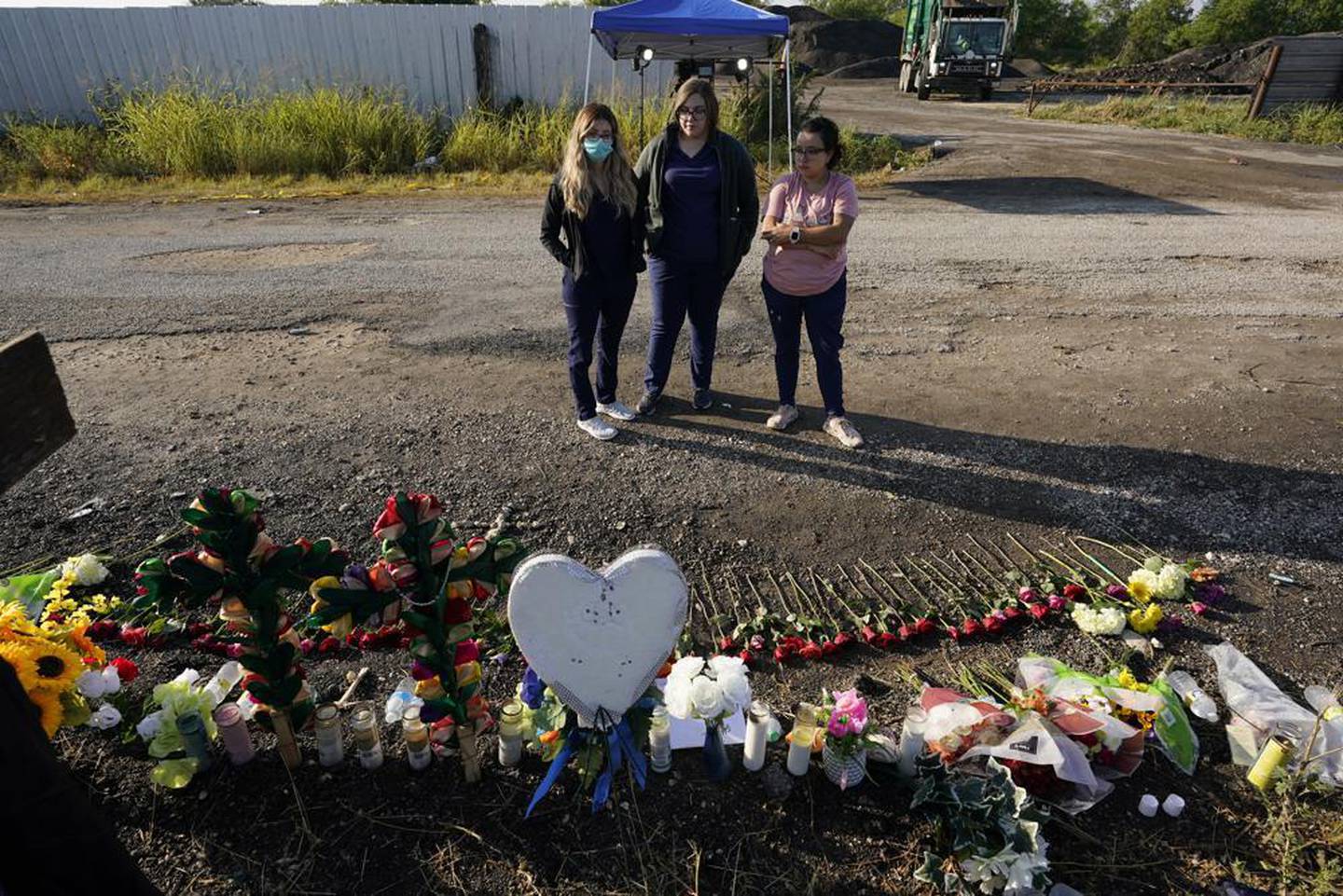 Mourners pay their respects at a makeshift memorial at the site where officials found dozens of people dead in an abandoned semitrailer containing suspected migrants. Photo / AP

The death count from Monday's tragedy in San Antonio was the highest ever from a smuggling attempt in the US, he said. Four years ago, 10 died in 2017 after being trapped inside a truck parked at a San Antonio Walmart. In 2003, the bodies of 19 migrants were found in a sweltering truck southeast of the city.

Temperatures in San Antonio on Monday approached 38C, and those taken to the hospital were hot to the touch and dehydrated, authorities said.

It wouldn't have taken long for the temperature inside the truck to become deadly, said Jennifer Vanos, an assistant professor at Arizona State University who has researched child deaths in hot vehicles.

The tractor-trailer likely would have been hot even before anyone got inside and because of the high humidity, lack of airflow and so many people inside, their sweat couldn't evaporate to cool their bodies and they would have dehydrated quickly, she said.

With little information about the victims, desperate families from Mexico and Central America frantically sought word of their loved ones.

Felicitos Garcia, who owns a grocery store in the remote community of San Miguel Huautla in Mexico's southern state of Oaxaca, said the mother of Vásquez Guzmán, who was hospitalized in Texas, had gone to the state capital to learn more about her son's condition and the whereabouts of his cousin, who is missing.

"Life is tough here," Garcia said. "People survive by growing their own crops like corn, beans and wheat. Sometimes the land gives and sometimes it doesn't when the rains arrive late. There is nothing in place for people to have other resources. People live one day to the next." A makeshift memorial at the site where officials found dozens of people dead in an abandoned semitrailer containing suspected migrants. Photo / AP

Identifying the victims was painstaking because among the pitfalls were fake or stolen documents.

Mexico's foreign affairs secretary identified two people Tuesday who were hospitalised in San Antonio. But it turned out one of the identification cards he shared on Twitter had been stolen last year in the southern state of Chiapas.

Haneydi Antonio Guzman, 23, was safe in a mountain community more than 2000km away from San Antonio when she began receiving messages from family and friends anxious over her fate.

"That's me on the ID, but I am not the person that was in the trailer and they say is hospitalised," Antonio Guzman said. "My relatives were contacting me worried, asking where I was." 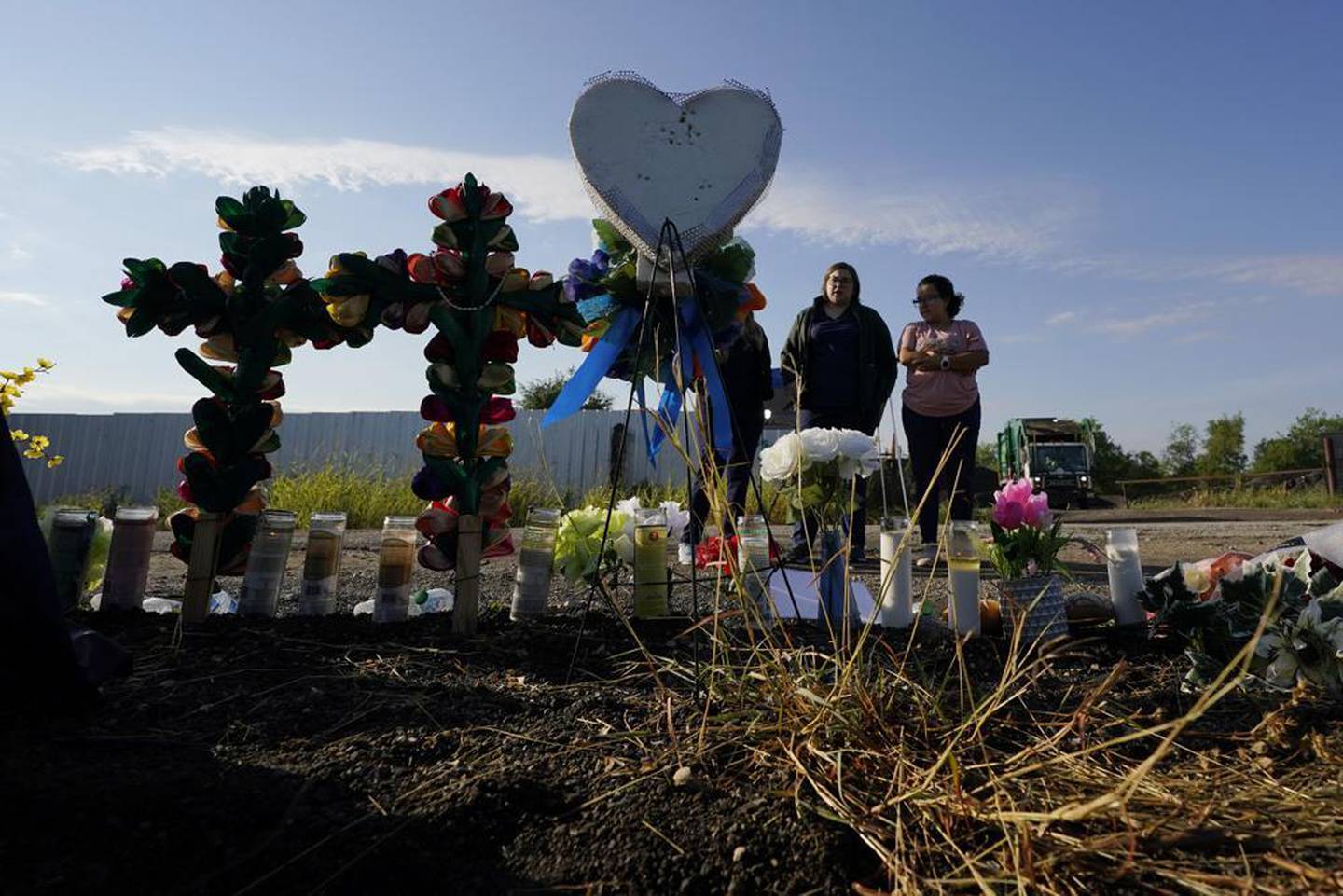 Mourners pay their respects at a makeshift memorial at the site where officials found dozens of people dead. Photo / AP

In some regions of Mexico, attempting to cross into the United States is a tradition that most youths in heavily migrant towns at least consider.

"All of the young people start to think about going (to the US) as soon as they turn 18," said migrant activist Carmelo Castañeda, who works with the nonprofit Casa del Migrante. "If there aren't more visas, our people are going to keep dying."