Desperate families of migrants from Mexico and Central America frantically sought word of their loved ones as authorities began the grim task on Tuesday of identifying 51 people who died after being abandoned in a tractor-trailer without air conditioning in the sweltering Texas heat.

It was the worst tragedy to claim the lives of migrants smuggled across the border from Mexico.

The driver of the truck and two other people were arrested, US Rep Henry Cuellar of Texas told The Associated Press.

He said the truck had passed through a Border Patrol checkpoint northeast of Laredo, Texas, on Interstate 35. He didn't know if migrants were inside the truck when it cleared the checkpoint.

The bodies were discovered on Monday afternoon on the outskirts of San Antonio when a city worker heard a cry for help from the truck parked on a lonely back road and found the gruesome scene inside, Police Chief William McManus said. Hours later, body bags lay spread on the ground.

More than a dozen people — their bodies hot to the touch — were taken to hospitals, including four children. 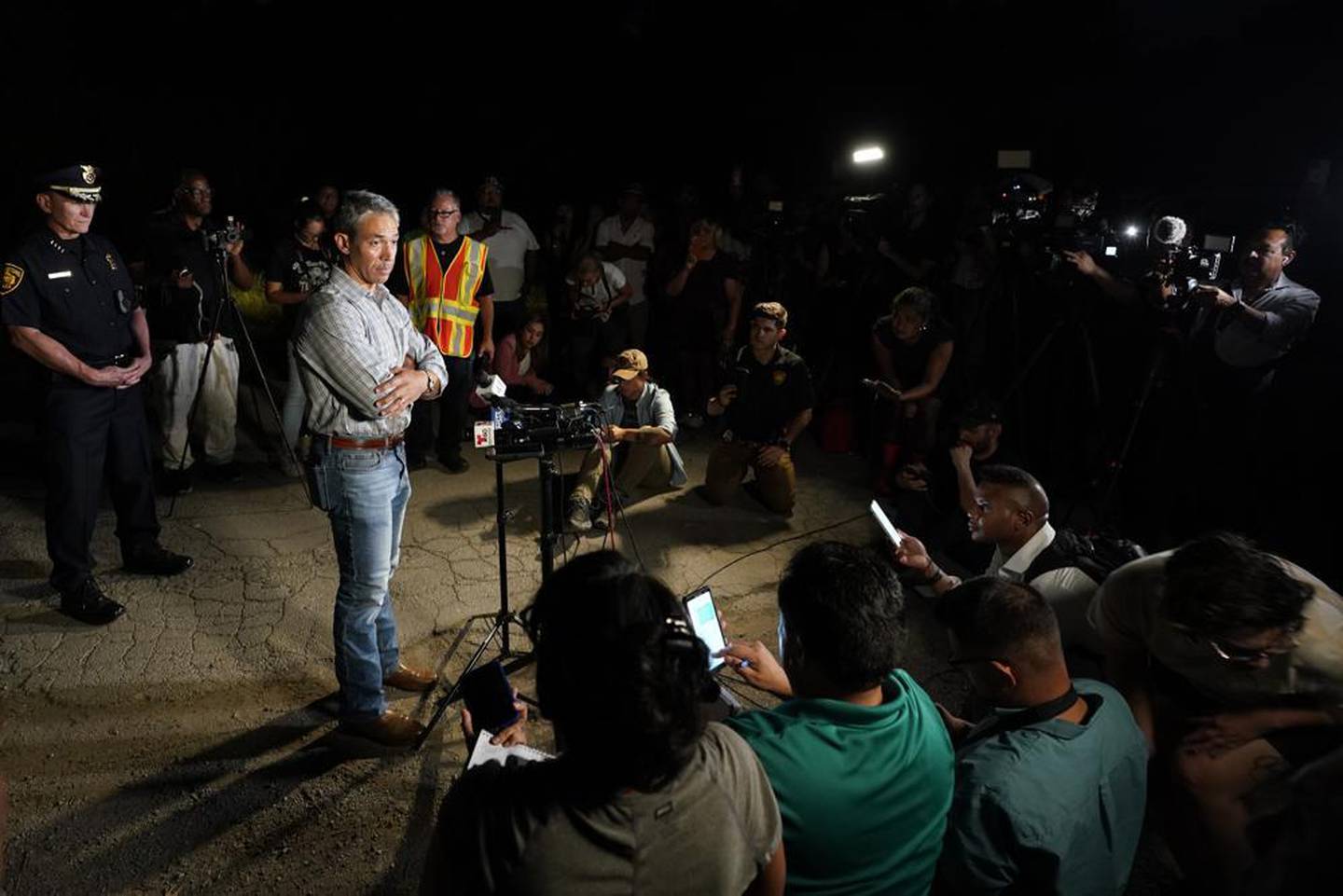 Forty-six people were found dead at the scene, authorities said. Five more later died after being taken to hospitals, said Bexar County Judge Nelson Wolff, the county's top elected official. Most of the dead were males, he said.

The death count was the highest ever from a smuggling incident in the United States, according to Craig Larrabee, acting special agent in charge of Homeland Security Investigations in San Antonio.

"This is a horror that surpasses anything we've experienced before," said San Antonio Mayor Ron Nirenberg. "And it's sadly a preventable tragedy."

"Exploiting vulnerable individuals for profit is shameful, as is political grandstanding around tragedy, and my administration will continue to do everything possible to stop human smugglers and traffickers from taking advantage of people who are seeking to enter the United States between ports of entry," Biden said in a statement.

The home countries of all of the migrants and how long they were abandoned on the side of the road were not immediately known. 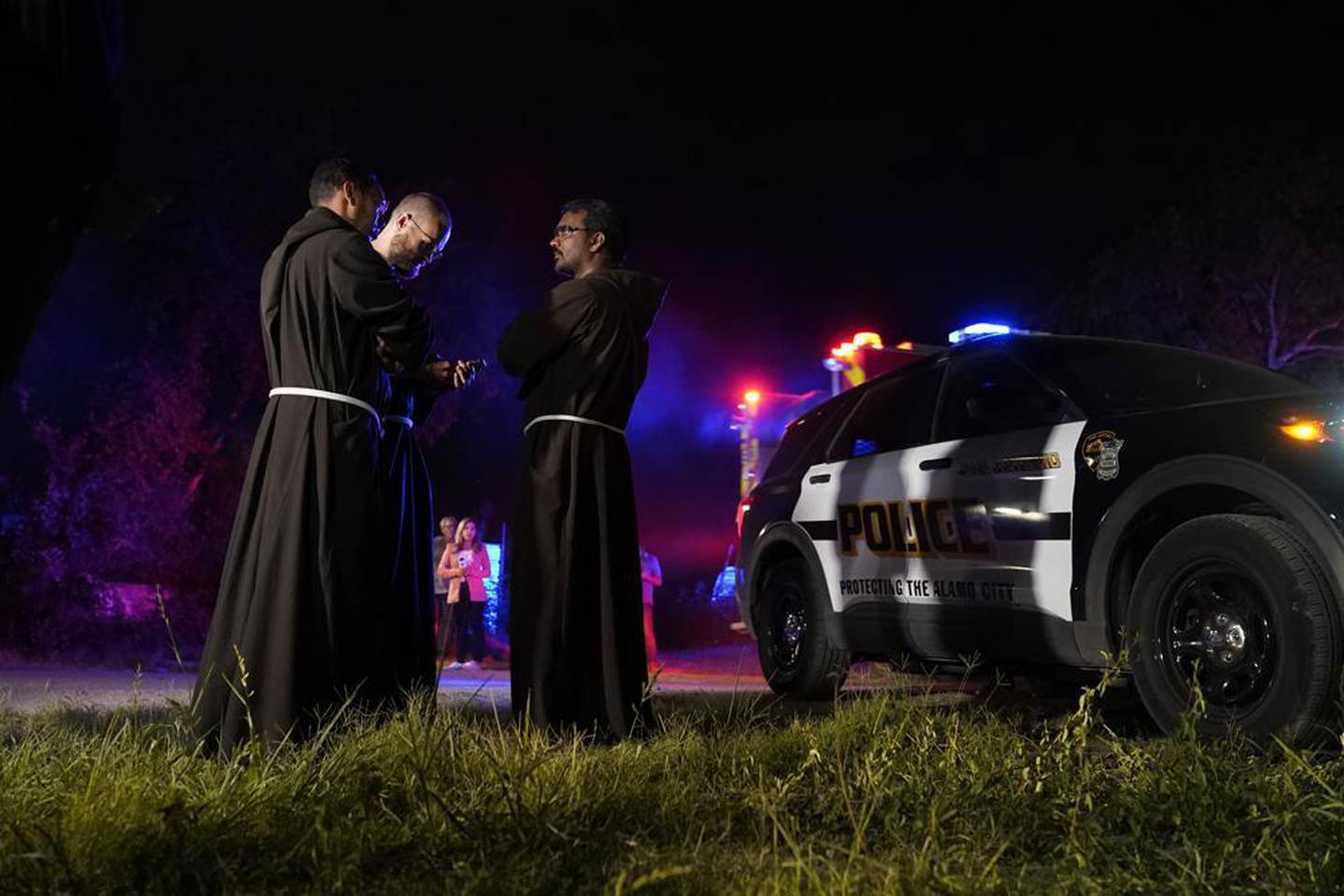 Priests gather near the scene where officials say dozens of people have been found dead and multiple others were taken to hospitals with heat-related illnesses. Photo / AP

At least 22 were from Mexico, seven from Guatemala and two from Honduras, Roberto Velasco Álvarez, head of the North America department in Mexico's Foreign Relations Department, said on Twitter. Families were reaching out to the Mexican Consulate in San Antonio throughout the morning looking for their loved ones, an employee there said.

Attempts to cross the US border from Mexico have claimed thousands of lives in both countries in recent decades.

US border authorities are stopping migrants more often on the southern border than at any time in at least two decades. Migrants were stopped nearly 240,000 times in May, up by one-third from a year ago.

Comparisons to pre-pandemic levels are complicated because migrants expelled under a public health authority known as Title 42 face no legal consequences, encouraging repeat attempts. Authorities say 25 per cent of encounters in May were with people who had been stopped at least once in the previous year.

South Texas has long been the busiest area for illegal border crossings. US authorities discover trucks with migrants inside "pretty close" to daily, Larrabee said. 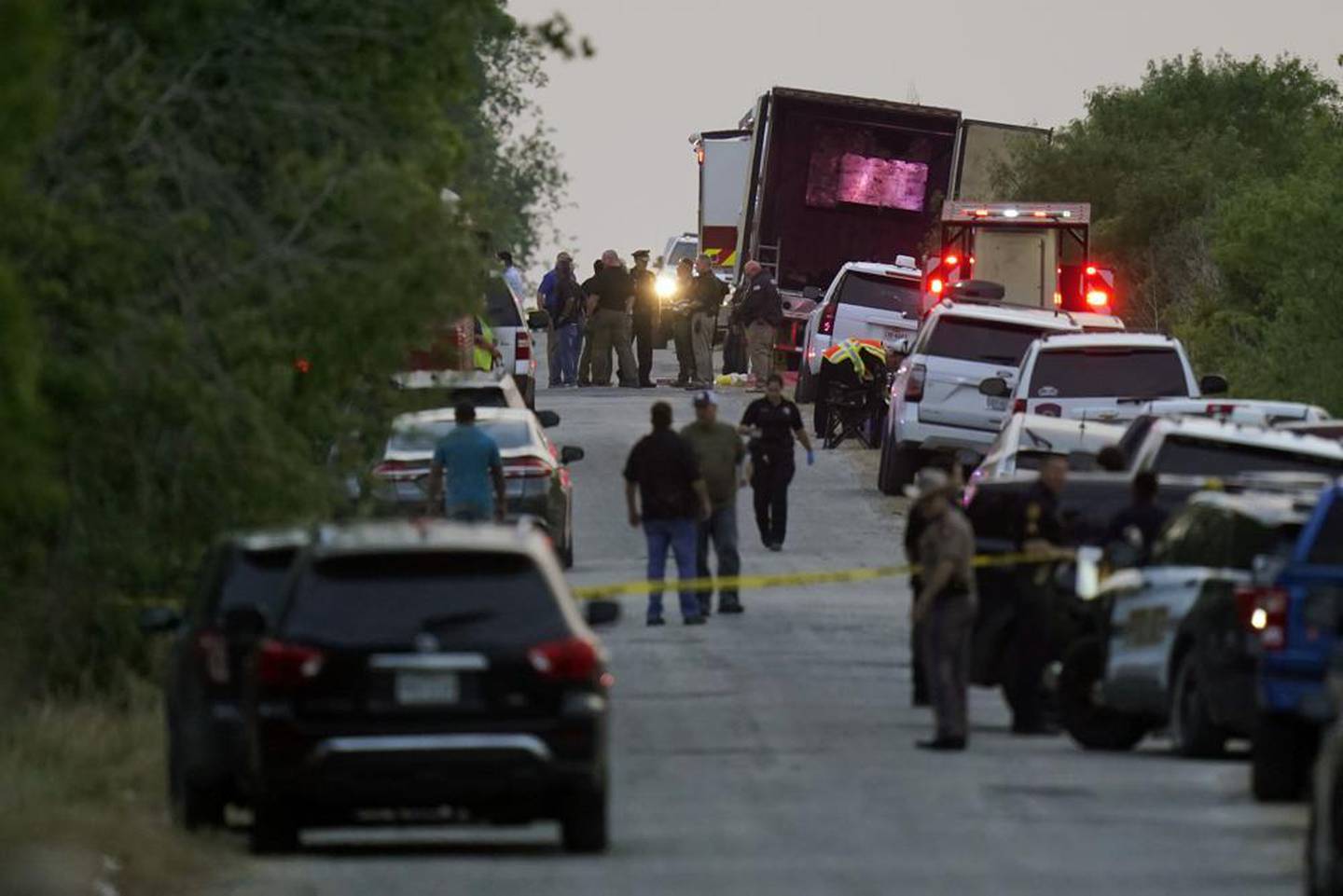 Police and other first responders work the scene where officials say dozens of people have been found dead. Photo / AP

Migrants typically pay $8000 to $10,000 to be taken across the border and loaded into a tractor-trailer and driven to San Antonio, where they transfer to smaller vehicles for their final destinations across the United States, he said.

Conditions vary widely, including how much water passengers get and whether they are allowed to carry cellphones, Larrabee said.

Authorities think the truck discovered Monday had mechanical problems when it was left next to a railroad track in an area of San Antonio surrounded by auto scrapyards that brush up against a busy freeway, Wolff said. "They had just parked it on the side of the road," he said.

San Antonio has been a recurring scene of tragedy and desperation in recent years involving migrants in semitrailers.

Ten migrants died in 2017 after being trapped inside a truck parked at a San Antonio Walmart. In 2003, the bodies of 19 migrants were found in a sweltering truck southeast of the city. More than 50 migrants were found alive in a trailer in 2018, driven by a man who said he was to be paid $3000 and was sentenced to more than five years in prison.

"These drivers, they take money from the cartels," said state Sen. Roland Gutierrez, a Democrat from San Antonio. "I'm sure many times these trucks end up at their destination successfully. Unfortunately, this has now happened all too often."

Other incidents have occurred long before migrants reached the US border. In December, more than 50 died when a semitrailer filled with migrants rolled over on a highway in southern Mexico. In October, Mexican authorities reported finding 652 migrants packed into six trailers near the US border. They were stopped at a military checkpoint.

Of the sixteen people taken to hospitals Monday with heat-related illnesses, five later died. Some were in critical condition, according to the hospitals.

One young woman, was unable to speak because of a tube placed by doctors when he visited her Monday night, said Antonio Fernandez, president and CEO of Catholic Charities in San Antonio.

He asked her two questions: if he could pray with her, and if she was from Guatemala. She nodded yes both times.

Those taken to the hospital were hot to the touch and dehydrated, and no water was found in the trailer, said Fire Chief Charles Hood.

"They were suffering from heat stroke and exhaustion," Hood said. "It was a refrigerated tractor-trailer, but there was no visible working AC unit on that rig."

Big rigs emerged as a popular smuggling method in the early 1990s amid a surge in US border enforcement in San Diego and El Paso, Texas.

Before that, people paid small fees to mom-and-pop operators to get them across a largely unguarded border. As crossing became exponentially more difficult after the 2001 terror attacks in the US, migrants were led through more perilous terrain and had to pay thousands of dollars more.

Some advocates drew a link to the Biden administration's border policies. Aaron Reichlin-Melnick, policy director at the American Immigration Council, wrote that he had been dreading such a tragedy for months.

"With the border shut as tightly as it is today for migrants from Mexico, Guatemala, Honduras and El Salvador, people have been pushed into more and more dangerous routes," he wrote on Twitter.

Migrants — largely from Mexico, Guatemala, Honduras and El Salvador — have been expelled more than two million times under the pandemic-era rule in effect since March 2020 that denies a chance to seek asylum. The Biden administration planned to end the policy but a federal judge in Louisiana blocked the move in May.

US Customs and Border Protection reported 557 deaths on the southwest border in the 12 months ending September 30, more than double the 247 deaths reported in the previous year and the highest since it began keeping track in 1998. Most were related to heat exposure.