US House Speaker Nancy Pelosi has arrived in Taiwan, becoming the highest-ranking American official in 25 years to visit the self-ruled island claimed by China, which quickly announced that it would conduct military manoeuvres in retaliation for her presence.

Pelosi arrived aboard a US Air Force passenger jet and was greeted on the tarmac at Taipei's international airport by Taiwan's foreign minister and other Taiwanese and American officials. She posed for photos before her motorcade whisked her unseen into the parking garage of a hotel.

Her visit has ratcheted up tension between China and the United States because China claims Taiwan as part of its territory, and it views visits by foreign government officials as recognition of the island's sovereignty.

The Biden administration did not explicitly urge Pelosi to call off her plans. It repeatedly and publicly assured Beijing that the visit would not signal any change in US policy on Taiwan. 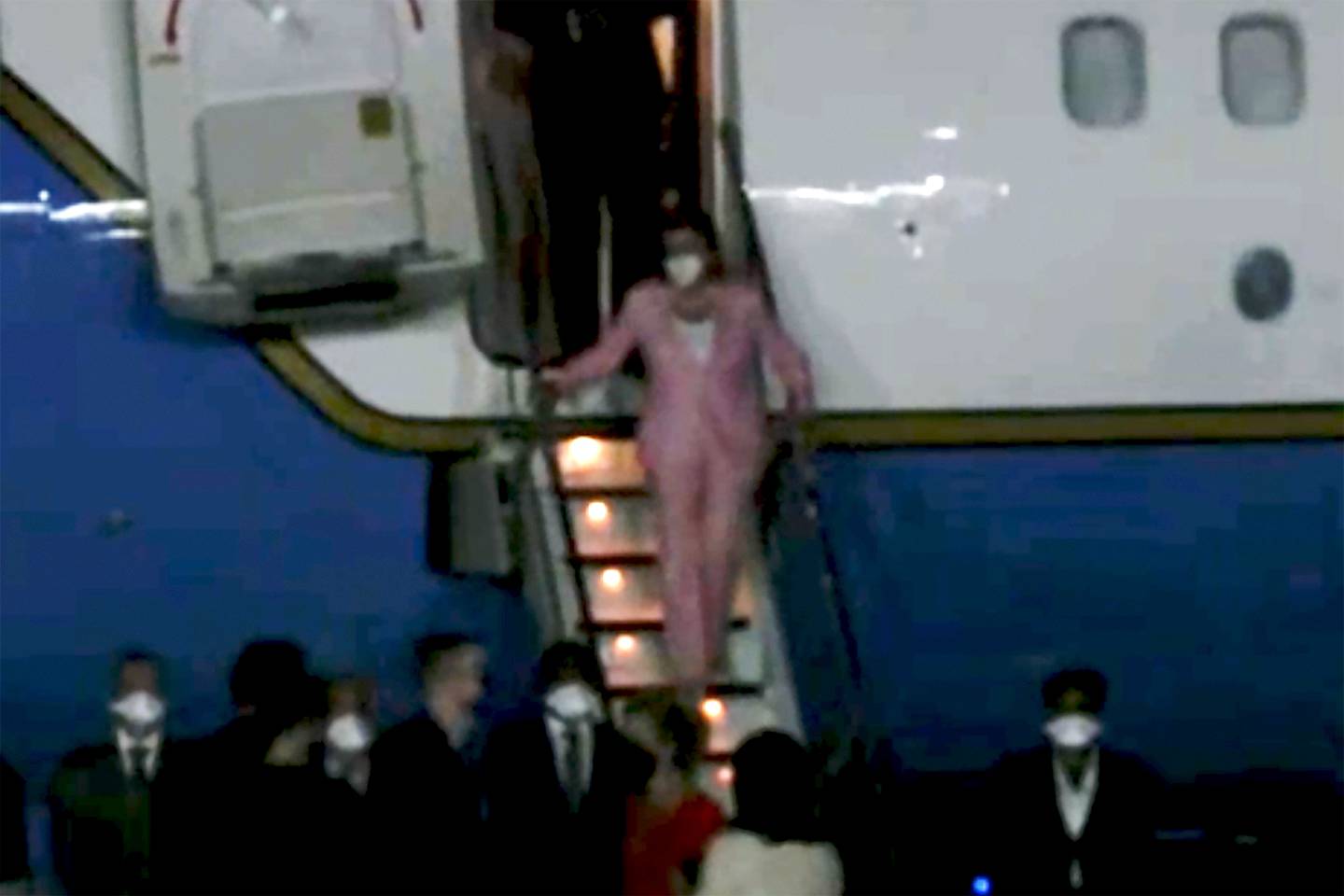 US House Speaker Nancy Pelosi exits the plane as she arrives in Taipei. Photo / AP

Soon after Pelosi's arrival, China announced a series of military operations and drills, which followed promises of "resolute and strong measures" if Pelosi went through with her visit.

The People's Liberation Army said the manoeuvres would take place starting Tuesday night in the waters and skies near Taiwan and include the firing of long-range ammunition in the Taiwan Strait.

"This action is a solemn deterrent against the recent major escalation of the negative actions of the United States on the Taiwan issue, and a serious warning to the 'Taiwan independence' forces seeking 'independence'."

China's official Xinhua News said the army planned to conduct live-fire drills from August 4 to 7 across multiple locations. In an image the news agency released, the drills were to take place in six areas in the waters surrounding Taiwan.

"Some American politicians are playing with fire on the issue of Taiwan," Wang said. "This will definitely not have a good outcome ... the exposure of America's bullying face again shows it as the world's biggest saboteur of peace."

Back in the United States, 26 Republican lawmakers issued a statement of rare bipartisan support for the Democratic speaker. The statement called trips by members of Congress to Taiwan routine. Senate Republican Leader Mitch McConnell said he backed Pelosi's visit as a display of support for Taiwan's democracy and said any allegations that her itinerary was provocative are "utterly absurd".

"I believe she has every right to go," McConnell said in a Senate speech.

Taiwan's Foreign Ministry had declined to comment on whether Pelosi would visit. The trip was not officially announced ahead of time.

The speaker has sought for decades to focus attention on Chinese democracy movements. She travelled to Tiananmen Square in 1991, two years after China crushed a wave of democracy protests.

Barricades were erected outside the Grand Hyatt Hotel in Taipei. Journalists and onlookers thronged the streets just outside and pressed against the hotel's lobby windows as they awaited Pelosi's motorcade. Two buildings in the capital lit up LED displays with words of welcome, including the iconic Taipei 101 building, which said "Welcome to Taiwan, Speaker Pelosi".

China, which regards Taiwan as a renegade province to be annexed by force if necessary, repeatedly warned of retaliation, saying its military will "never sit idly by".

"The US and Taiwan have colluded to make provocations first, and China has only been compelled to act out of self-defence," Chinese Foreign Ministry spokesperson Hua Chunying told reporters in Beijing. 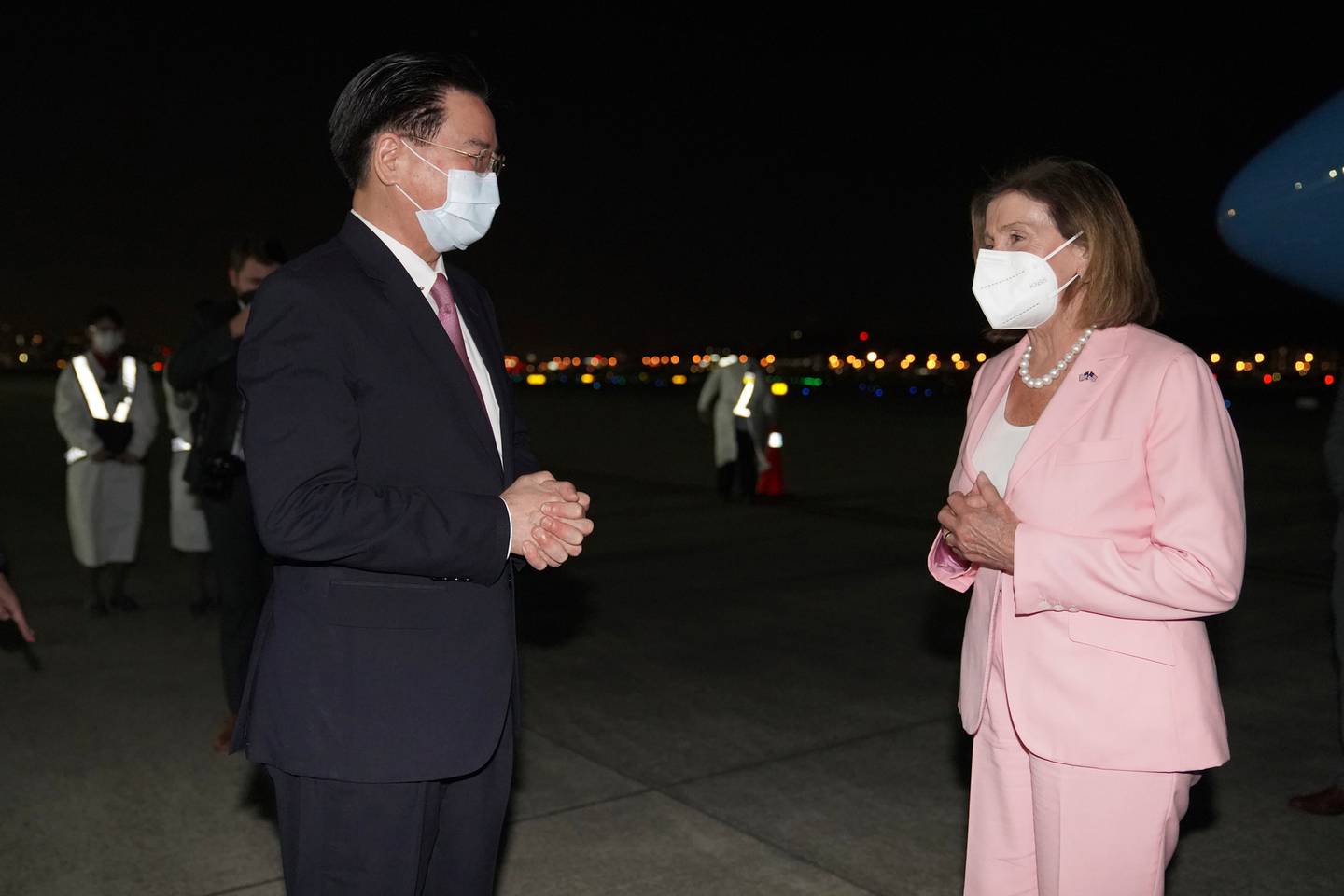 Shortly after Pelosi's arrival, a representative of the Chinese legislature's Standing Committee said the trip "severely violated" the "One China" principle, which is Beijing's claim to be the sole government of mainland China and Taiwan.

China's military threats have driven concerns about a new crisis in the 140km Taiwan Strait that could roil global markets and supply chains.

The White House on Monday decried Beijing's rhetoric, saying the US has no interest in deepening tensions with China and "will not take the bait or engage in sabre rattling".

White House National Security Council spokesman John Kirby underscored that the decision about whether to visit Taiwan was ultimately Pelosi's.

Kirby said administration officials are concerned that Beijing could use the visit as an excuse to take provocative retaliatory steps, including military action.

"Put simply, there is no reason for Beijing to turn a potential visit consistent with longstanding US policy into some sort of crisis or use it as a pretext to increase aggressive military activity in or around the Taiwan Strait," Kirby said.

US officials have said the American military will increase its movements in the Indo-Pacific region during Pelosi's visit. The aircraft carrier USS Ronald Reagan and its strike group were in the Philippine Sea on Monday, according to officials who spoke on condition of anonymity to discuss military operations.

The Reagan, the cruiser USS Antietam and the destroyer USS Higgins left Singapore after a port visit and moved north to their home port in Japan. The carrier has an array of aircraft, including F/A-18 fighter jets and helicopters, on board as well as sophisticated radar systems and other weapons.

Taiwan and China split in 1949 after the Communists won a civil war on the mainland. The US maintains informal relations and defence ties with Taiwan even as it recognises Beijing as the government of China. 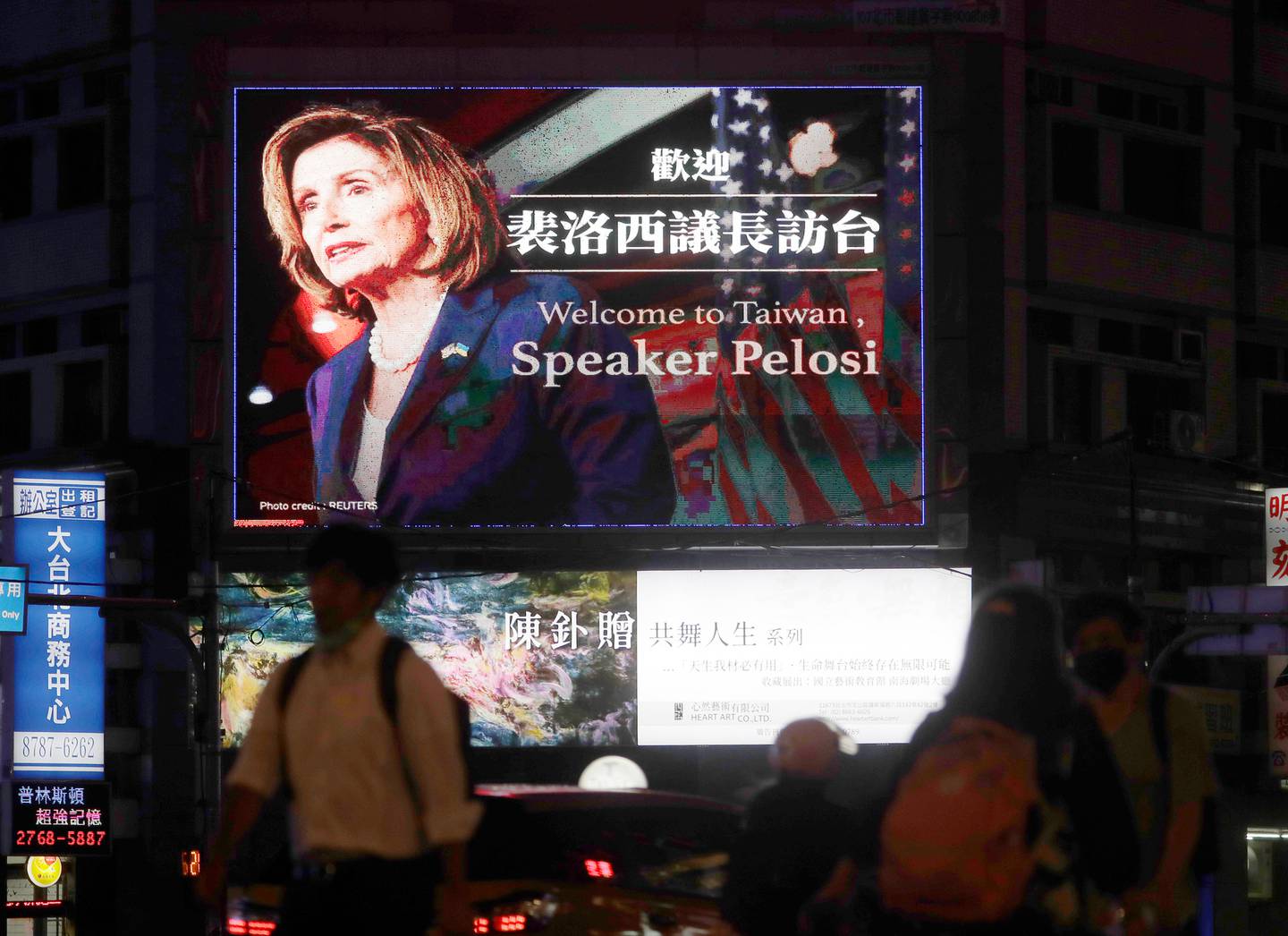 Beijing sees official American contact with Taiwan as encouragement to make the island's decades-old de facto independence permanent, a step US leaders say they don't support. Pelosi, head of one of three branches of the US government, is the highest-ranking elected American official to visit Taiwan since then-Speaker Newt Gingrich in 1997.

The flight tracking site Flightradar24 said Pelosi's aircraft, an Air Force version of the Boeing 737, was the most tracked in the world on Tuesday evening with 300,000 viewers. The plane took a roundabout route, flying east over Indonesia rather than directly over the South China Sea.

Pelosi has used her position to be an emissary for the US on the global stage. She has long challenged China on human rights, including in 2009, when she hand-delivered a letter to then-President Hu Jintao calling for the release of political prisoners. She had sought to visit Taiwan's island democracy this year before testing positive for Covid-19.

China has been steadily ratcheting up diplomatic and military pressure on Taiwan. China cut off all contact with Taiwan's government in 2016 after President Tsai Ing-wen refused to endorse its claim that the island and mainland together make up a single Chinese nation, with the Communist regime in Beijing being the sole legitimate government.

Pelosi kicked off her Asian tour Monday in Singapore. She is to travel to Japan and South Korea this week.