At least 14 people were killed and many more injured in mass shootings in the US over the weekend.

The Gun Violence Archive, which tracks deaths and injuries across the country, defines mass shootings as four or more people shot or killed, not including the shooter.

The database showed there were mass shootings across at least six states on Saturday and Sunday, with the youngest victim to die just 14 years old.

Multiple children were also shot and injured, including a 12-year-old. 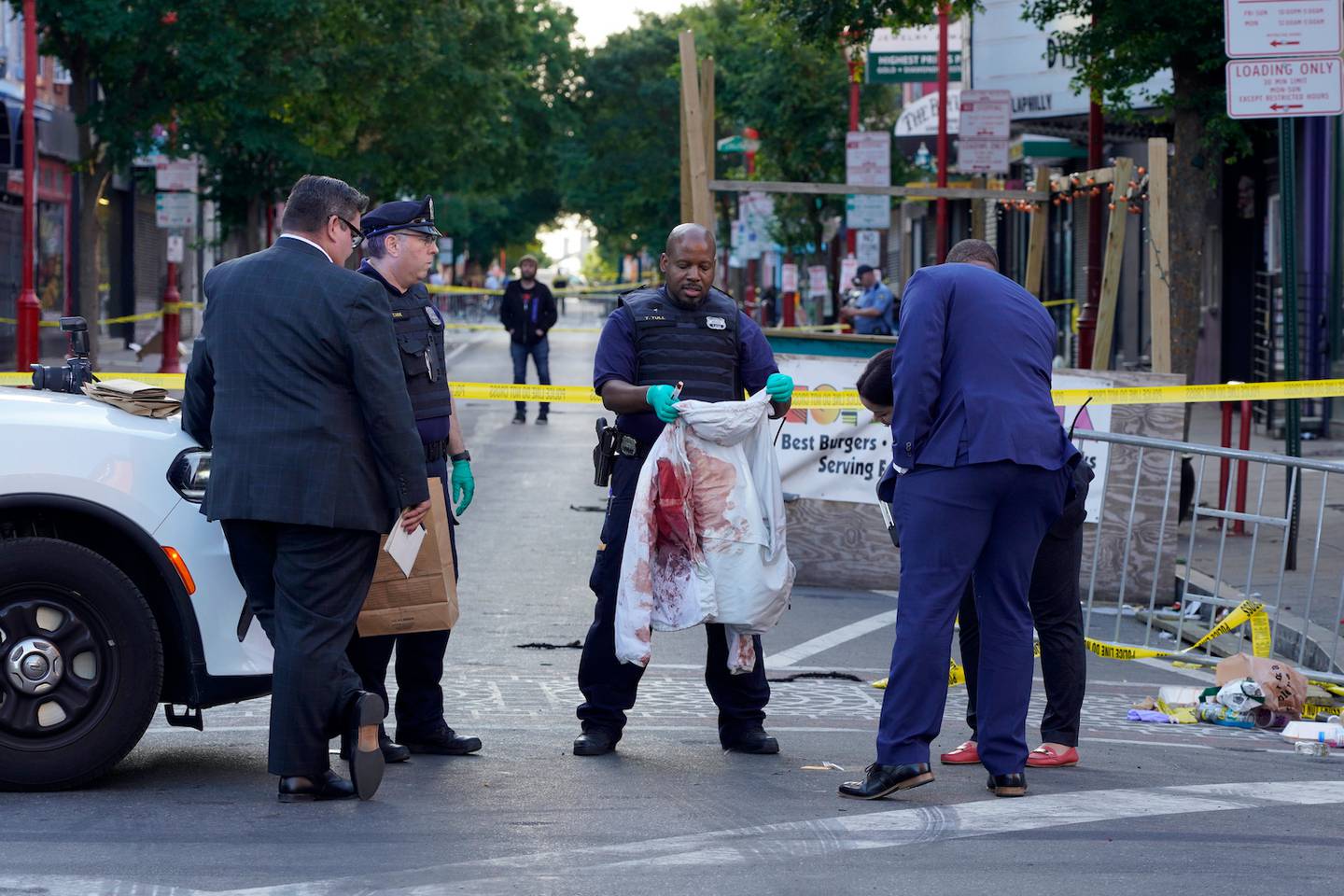 The shootings come amid a heated debate across the nation on gun control, reignited after a mass shooting at a Texas elementary school, where an 18-year-old shot and killed 19 young children and two teachers.

Other recent mass shootings include the supermarket shooting in Buffalo, New York, where 10 people died, and at a hospital shooting in Tulsa, Oklahoma, where four people were killed.

Terrifying videos showed people running for their lives in a packed street in Philadelphia, Pennsylvania on Saturday night (local time).

Three people were fatally shot and at least 11 others were injured after a brawl between two men escalated at about 11.30pm.

Police said one of the men killed was involved in the fight. Another two men have since been arrested, according to CBS.

The two others who lost their lives – 22-year-old Kristopher Minners and 27-year-old Alexis Quinn – were innocent bystanders. Bullet holes from a prior shooting are still present in a storefront window at the scene of a fatal overnight shooting on South Street in Philadelphia over the weekend. Photo / AP

Philadelphia police commissioner Danielle Outlaw described the shooting as a "horrendous and unthinkable act" and said it happened in a popular spot with locals and tourists.

Minners, a school adviser, was out celebrating his 22nd birthday with friends.

Pennsylvania American Federation of Teachers released a statement about the tragic loss of Minners.

"The loss of Kris reminds us that gun violence can and will touch everyone in our nation as long as our elected officials allow it to continue."

In a statement, Philadelphia mayor Jim Kenney said the continued violence in the US could not be accepted.

"As mayor, I will continue to fight to protect our communities and urge others to advocate for stronger laws that keep guns out of the hands of violent individuals," he said.

Just hours later, another three people were killed and 14 others injured during a mass shooting outside a nightclub in Chattanooga, Tennessee.

Most were struck by bullets but some, including a person who died, were hit by cars fleeing the shooting.

Chattanooga mayor Tim Kelly, wrote on Twitter: "There's a lot we don't know about what happened this morning, but what we do know is that there are families whose lives have been shattered because once again, we had people deciding to resolve their issues with firearms. 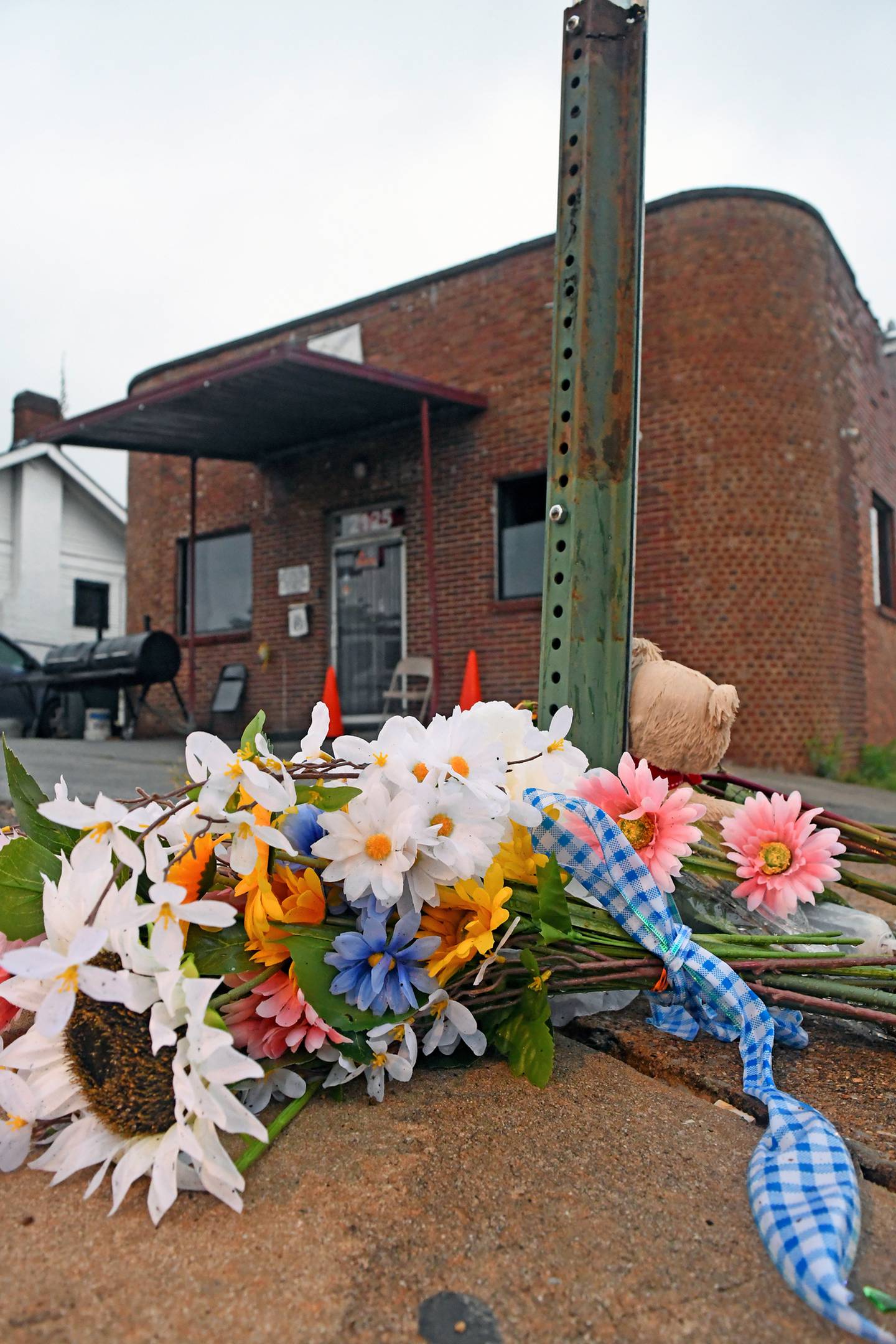 A makeshift memorial is shown at the base of a street sign outside Mary's Bar and Grill in Chattanooga. Photo / AP

"Stop the shooting, stop the violence. This city and our communities are better than this, and we demand it," he added.

Only a week before, six people were shot in the city during an altercation between two groups.

Two men and a pregnant woman were killed during a shooting in the early hours of the morning on Sunday in Saginaw, Michigan.

Two other men were also injured.

The woman, identified as 24-year-old Laura Buendia, was seven months pregnant and died in hospital, according to WNEM.

Her baby was delivered and is in stable condition.

The other two who died were Mariano Escareno and Rafael Campos, both 24.

It is believed the shooting happened following an argument at a family barbecue.

Two people were killed and two other injured during a shooting outside a bar in Mesa, Arizona in the early hours of Sunday morning.

When police arrived, they found two men lying in the carpark and they were pronounced dead, according to ABC Arizona.

Another two people were then found with non-life-threatening injuries and taken to hospital.

Three people were detained after police stopped a car nearby that they had followed after seeing it speed away.

It wasn't the only mass shooting in the state over the weekend.

In the early hours of Saturday morning in Phoenix, Arizona, a 14-year-old girl was killed and eight others were injured during a shooting at a strip of shops – including two women with life-threatening injuries.

Phoenix police Sergeant Andy Williams said about 100 people had gathered for "some sort of party" when a fight broke out that escalated into a shooting.

"Many rounds were shot into this crowd of people while everyone fled the area," he said. 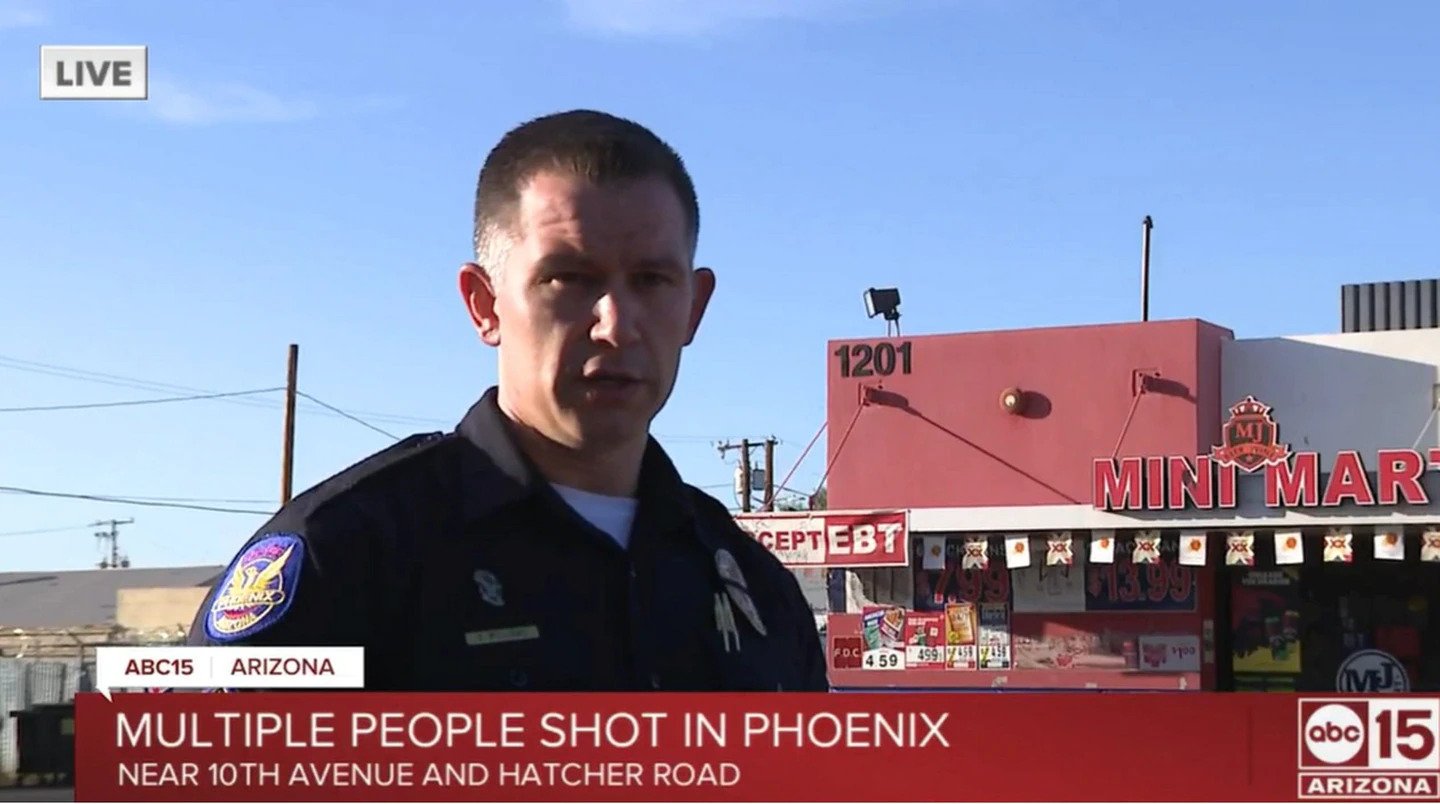 Phoenix police Sgt Andy Williams speaking from outside the strip shops where a 14-year-old was fatally shot and eight other were injured. Photo / ABC Arizona

"This time, it's Phoenix, at 10th Ave & Hatcher. Time has run out. Change must happen now."

A teen died in a shooting that left three others injured on Saturday night in Macon, Georgia.

Police received a call just before 7pm with the caller stating several people had been shot at an abandoned house, according to a statement from Bibb County Sheriff's Office.

Three of the victims had taken themselves to the hospital and police found a fourth victim – 19-year-old Cleveland Raines – behind the abandoned house.

He was taken to hospital and later died.

Eight people, including multiple children, were shot at a high school graduation party in Summerton, South Carolina on Saturday night.

A Go Fund Me page said the 32-year-old was a mother to four sons and one daughter.

The other victims were aged between 12 and 17 years old, as well as a 36-year-old woman.

Clarendon County Sheriff Tim Baxley said there were about 150 people at the party when two cars pulled into the yard and opened fire before speeding off.

"Senseless acts won't be tolerated. There's absolutely no reasoning whatsoever for things like this to be happening," he told WLTX.

"This was a school graduation party and you've got all these innocent children that were there that were hit by gunfire."

Only the day before, a young man was killed and seven other people were injured during a graduation party in Chester, Virginia.

The man who died was 20-year-old Taborri Carter.

Five people had been shot, aged 18 to 21, while two of those injured were hit by cars as they fled the scene, according to The Progress-Index.

The newspaper reported that officers were sent to the area to investigate a "large party" involving between 50 to 100 juveniles that had spilt out from a house into the street.