As Americans cast their ballots in person Tuesday, election officials and voting rights activists reported few early problems at the polls in battleground states that could determine who wins the presidency and which party controls the US Senate.

In Michigan, Secretary of State Jocelyn Benson said Tuesday that "precincts are islands of calm." In Florida, the spokesman for the Broward County Supervisor of Elections said the day was "boring."

In Georgia, where the June primary election was plagued by widespread voting problems and delays, Secretary of State Brad Raffensperger said Election Day was "successful" so far. And in Florida, Secretary of State Laurel Lee said that no voting security issues had been reported in the state.

Officials in the Democratic stronghold of Milwaukee, Wisconsin, meanwhile, reported no problems at polling places or at the city's absentee ballot counting center.

One exception was in four spots of the key state of North Carolina. Statewide election results will be delayed by at least 45 minutes -- until 8:15 p.m. ET -- after the state board of elections extended voting at four locations that opened late on Election Day.

While voting proceeded relatively smoothy in key states, though long lines were reported in some locations, federal and state officials said they were working to combat misleading information spread through anonymous robocalls that seemed intent on discouraging people from heading to the polls.

In addition, early signs pointed to potential legal showdowns in Pennsylvania, a key battleground that President Donald Trump narrowly won four years ago and has repeatedly criticized over its mail-in voting. As the polls opened Tuesday, Republicans filed a federal lawsuit that took aim at how election officials in Democratic-leaning Montgomery County handled absentee ballots that arrived before Election Day. 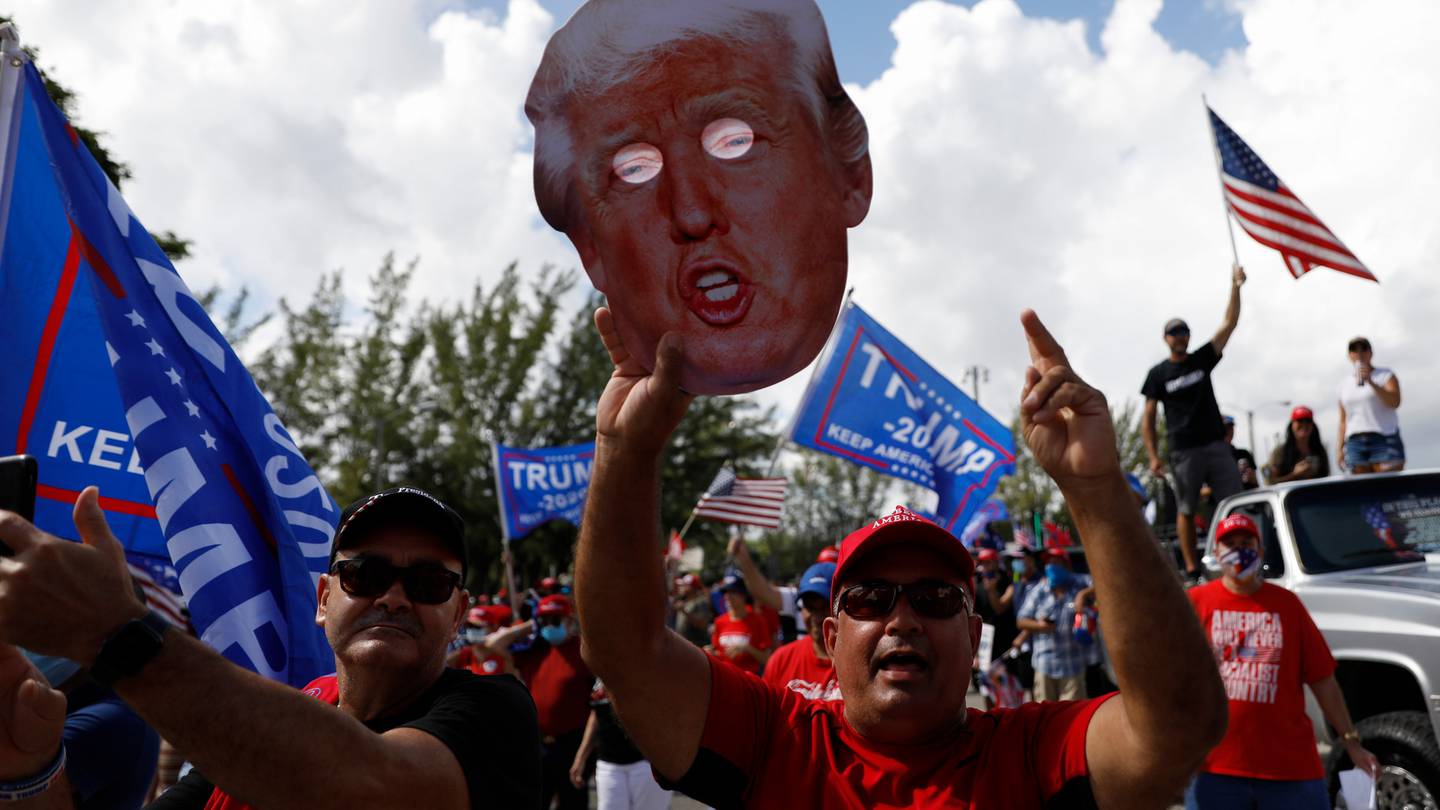 The plaintiffs allege officials in this suburban Philadelphia county conducted "pre-canvassing" of ballots before 7 a.m. ET Tuesday and allowed people to fix perceived defects in their ballots. The Republicans have asked a federal judge to order county officials to set aside any changed ballots. They argue that treating mail-in ballots differently in Montgomery County than other counties in the state violates the Constitution.

Montgomery County officials say they have complied with the rules.

The dispute might affect only a fraction of ballots in this county that backed Democrat Hillary Clinton four years ago. The GOP complaint identifies roughly 1,200 votes that might have been found defective out of roughly 223,000 absentee ballots that had been cast in Montgomery County as of Tuesday morning.

People across the country reported receiving the anonymous robocalls telling them to "stay home," prompting warnings from officials in at least two states -- Michigan and Nebraska -- to disregard the messages.

Hashim Warren, who lives in Greensboro, North Carolina, received the call and told CNN he found it "disturbing" because some voters could find the call intimidating.

Warren, who works in marketing, said he has used mass text and call services before and knew this robocall was likely going to many other people. But he said not everyone would know that.

"For example, my mother-in-law, I could see her really disturbed about 'how did someone get my number,'" Warren said.

The FBI said Tuesday it was "aware of reports" of the robocalls but that a statement earlier in the day from a senior official with the Cybersecurity and Infrastructure Security agency that the FBI was investigating the calls was not accurate.

In Michigan, the state's Attorney General Dana Nessel also flagged a misinformation robocall targeting Flint voters. The message told them that if the line is too long they should leave and come back tomorrow.

This is categorically false because voters must be in line by 8 p.m. Tuesday to have their votes count.

"Getting reports of multiple robocalls going to Flint residents that, due to long lines, they should vote tomorrow," Nessel tweeted Tuesday. Obviously, this is FALSE and an effort to suppress the vote. No long lines and today is the last day to vote. Don't believe the lies! Have your voice heard!"

The once-in-a-century pandemic has dramatically altered how Americans are casting their ballots. More than 100 million had voted before the polls opened Tuesday, shattering records and likely reducing the number of people who will turn out to vote in person.

With hours to go before poll closings, the threat still remained for issues to arise, from the routine Election Day headaches -- such as long lines and voting machines malfunctioning -- to uniquely 2020 problems, including the threat that the coronavirus pandemic poses to voters and poll workers alike and the heightened fears law enforcement and election officials have about intimidation and conflict occurring at the polls.

In North Carolina, police arrested a man in Charlotte for trespassing at a local polling place on Tuesday when he showed up at the site -- with a gun and a hound dog -- after being instructed earlier in the day to leave.

In Pennsylvania, heavy turnout was reported in Bucks County, a competitive county in the suburbs north of Philadelphia. Some voters were waiting as long as three or four hours in line, according to Bucks County Commissioner Gene DiGirolamo. At Bensalem High School, CNN talked to voters who reported spending about 90 minutes waiting to vote.

In Arizona, long voting lines formed quickly at many polling places in populous Maricopa County, home to Phoenix and its suburbs. Polling stations opened at 6 a.m., and by 7:30 a.m. there were wait times as long as 45 minutes for voting sites in GOP strongholds such as Glendale, Chandler, Gilbert and Surprise, according to estimates posted on the Maricopa County Recorder's election site.

Elsewhere, voting rights groups are monitoring potential problems after officials shuttered polling places because of the pandemic and potential confusion over many states' new voting processes this election.

Suzanne Almeida, the interim director of the Pennsylvania's arm of Common Cause voting rights group, said the state "is having a regular election day here in Pennsylvania" but seeing long lines "due to polling places opening late" and last-minute polling changes.

Election challenges from the pandemic extend beyond the polls, as the millions of mail-in ballots are expected to lead to a delay in the counting of votes once the polls close -- particularly in the battlegrounds of Wisconsin and Pennsylvania, where the state legislatures failed to pass laws for processing absentee ballots before Tuesday.

"Look, the country is on edge," North Carolina Attorney General Josh Stein said Monday. But voters "should take comfort in knowing that they will be the ones who determine the winners of these elections -- not any politicians, not any lawyers," said Stein, a Democrat.

Despite election officials' warnings that it may take several days to finish counting ballots, Trump has continued to falsely claim that the count is supposed to be completed by Election Night. It's politically beneficial to him to make the false suggestion because more of his supporters are expected to vote in person on Election Day, while more voters for Democratic nominee Joe Biden are expected to vote through the mail.

Meagan Wolfe, Wisconsin's chief election official, said it would likely be Wednesday before the state's unofficial results were reported due in part to the high number of absentee ballots. 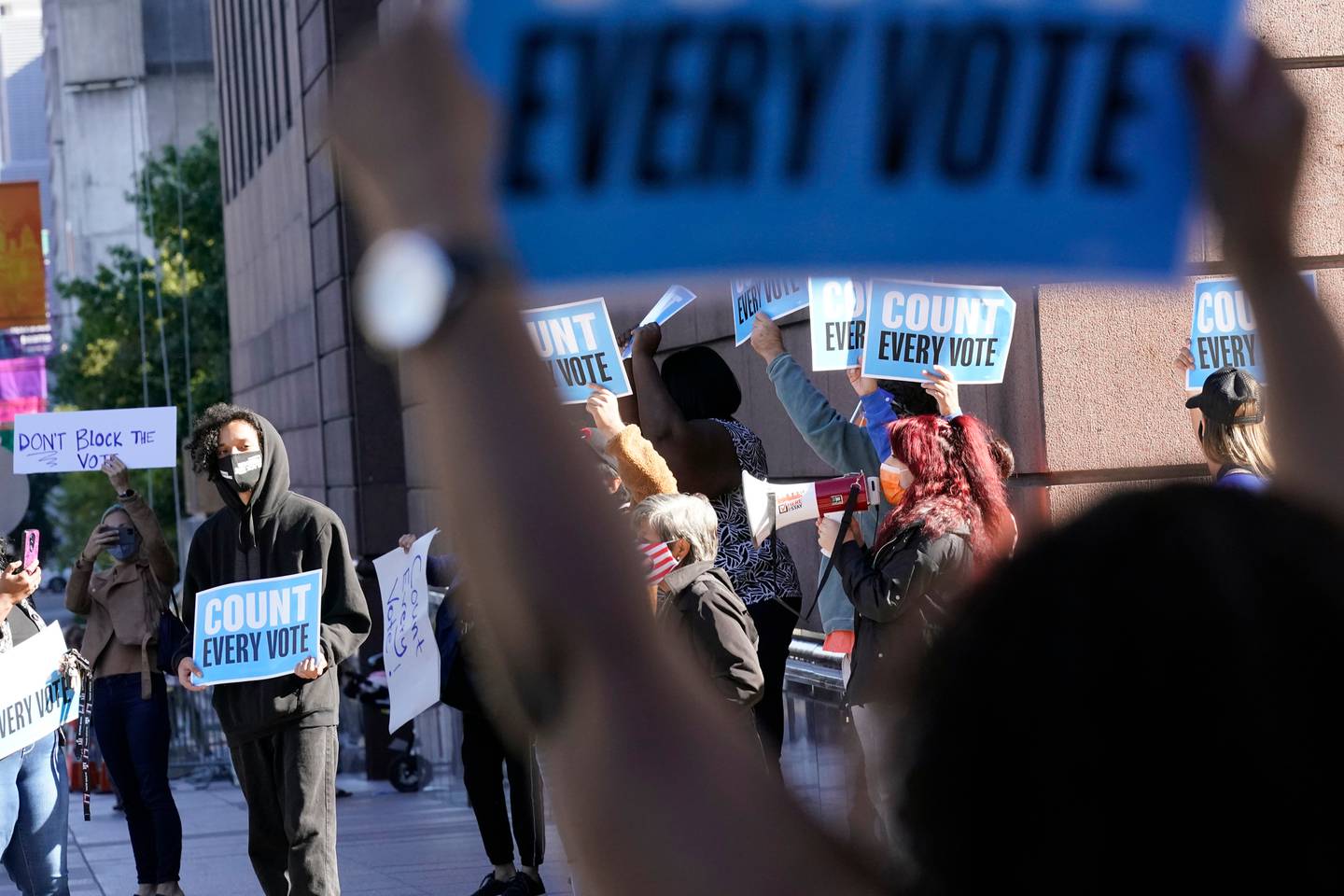 Demonstrators stand across the street from the federal courthouse in Houston, Texas. Photo / AP

Even before polls opened on Election Day, both presidential camps were gearing up for legal confrontations.

The changes to voting rules due to the pandemic sparked a litany of court cases over rules related to voting and the counting of ballots, and rulings continued right up to Election Day. On Monday, a Nevada judge tossed a GOP challenge that sought to stop the use of a signature verification software for not being stringent enough and to let poll watchers get closer to officials counting ballots.

In Texas, Republicans challenged more than 125,000 votes in Democratic-leaning Harris County, which includes Houston, because they were cast at drive-thru polling places, but a judge dismissed the suit Monday on technical grounds, saying the plaintiffs lacked standing.

But Harris County officials opted to close all but one of 10 drive-thru polling places on Election Day because the judge had questioned the validity of using tents as polling locations. The one remaining drive-thru site that will remain open Tuesday is the Toyota Center, which has "walls and a roof" and meets the judge's definition of a building.

Pennsylvania, in particular, could be the source of messy post-election legal fights. Last month, the US Supreme Court declined to take up a Republican challenge to a state Supreme Court ruling that absentee ballots could be accepted three days after Election Day, so long as they were postmarked by Tuesday, even if the postmark is not legible.

But some of the court's conservative justices suggested the state ruling was unconstitutional, and the late-arriving ballots are being segregated in case of additional legal disputes, though the state is counting them.

Trump, who has sought to cast doubts on the integrity of vote counting, warned in the closing days of the campaign that he plans to dispatch his lawyers to key swing states such as Pennsylvania. "As soon as that election is over, we're going in with our lawyers," the President told reporters over the weekend.

This election marks the first presidential contest since 1980 in which the Republican National Committee and the GOP presidential nominee will work together to monitor polling activity. In 2018, a federal judge allowed a consent decree to expire that for decades had sharply restricted the RNC's "ballot security" activities without prior judicial approval.

Voting rights experts say they are on watch for voting intimidation and suppression at the polls, especially after Trump encouraged his supporters to go to the polls to guard against alleged voter fraud.

The President also stirred controversy earlier this year when he urged his supporters to vote twice -- by absentee and then in person -- to test the election system.

Late Monday, Cochise County Recorder Lisa Marra in Arizona tweeted that her office had received dozens of calls from people demanding to know when their ballots had been counted. Cochise County, stretching from east of Tucson down to the US-Mexico border, backed Trump in 2016.

"They know the date we received it," she wrote. "Wanted to know date and time counted. Because the President said if they didn't get that info to go vote again tomorrow. Horrible advice for voters. STOP."

This story has been updated with additional reporting.