The Biden administration is urging a federal judge to block the nation's most restrictive abortion law, which has banned most abortions in Texas since early September and sent women racing to get care beyond the borders of the second-most populous state.

US District Judge Robert Pitman, an appointee of former President Barack Obama, did not say when he would rule following a nearly three-hour hearing in Austin on Friday local time. At least one Texas abortion provider said it stood ready to resume offering services at its three clinics if the law, known as Senate Bill 8, is temporarily shelved.

"Every day that SB8 is in effect, we turn away patients in droves," Amy Hagstrom Miller, president of Whole Woman's Health, told the court in a filing.

So far, abortion providers trying to block the Texas law have been rejected at every turn. That makes a lawsuit filed by the Biden administration their best chance yet to deliver the first legal blow to the GOP-engineered law. It has withstood an early wave of challenges, including one reviewed by the US Supreme Court, which allowed the law to remain in force.

The law bans abortion in Texas once cardiac activity is detected, which us usually around six weeks, before some women know they are pregnant. No exceptions are made in cases of rape or incest. Enforcement is solely left up to private citizens, who are entitled to at least $10,000 in damages if they are successful in suing not just abortion providers but anyone found to have helped a woman get an abortion.

"A state may not ban abortions at six weeks. Texas knew this, but it wanted a six-week ban anyway, so the state resorted to an unprecedented scheme of vigilante justice that was designed to scare abortion providers and others who might help women exercise their constitutional rights," Justice Department attorney Brian Netter told the court.

The law was signed by Republican Governor Greg Abbott in May and took effect on September 1.

In that short time, abortion providers say, "exactly what we feared" has become reality. Planned Parenthood says the number of patients from Texas at its Texas clinics decreased nearly 80 per cent in the two weeks after the law took effect. Some providers have described Texas clinics that are now in danger of closing while neighboring states struggle to keep up with a surge of patients who must drive hundreds of miles. Other women, they say, are being forced to carry pregnancies to term. 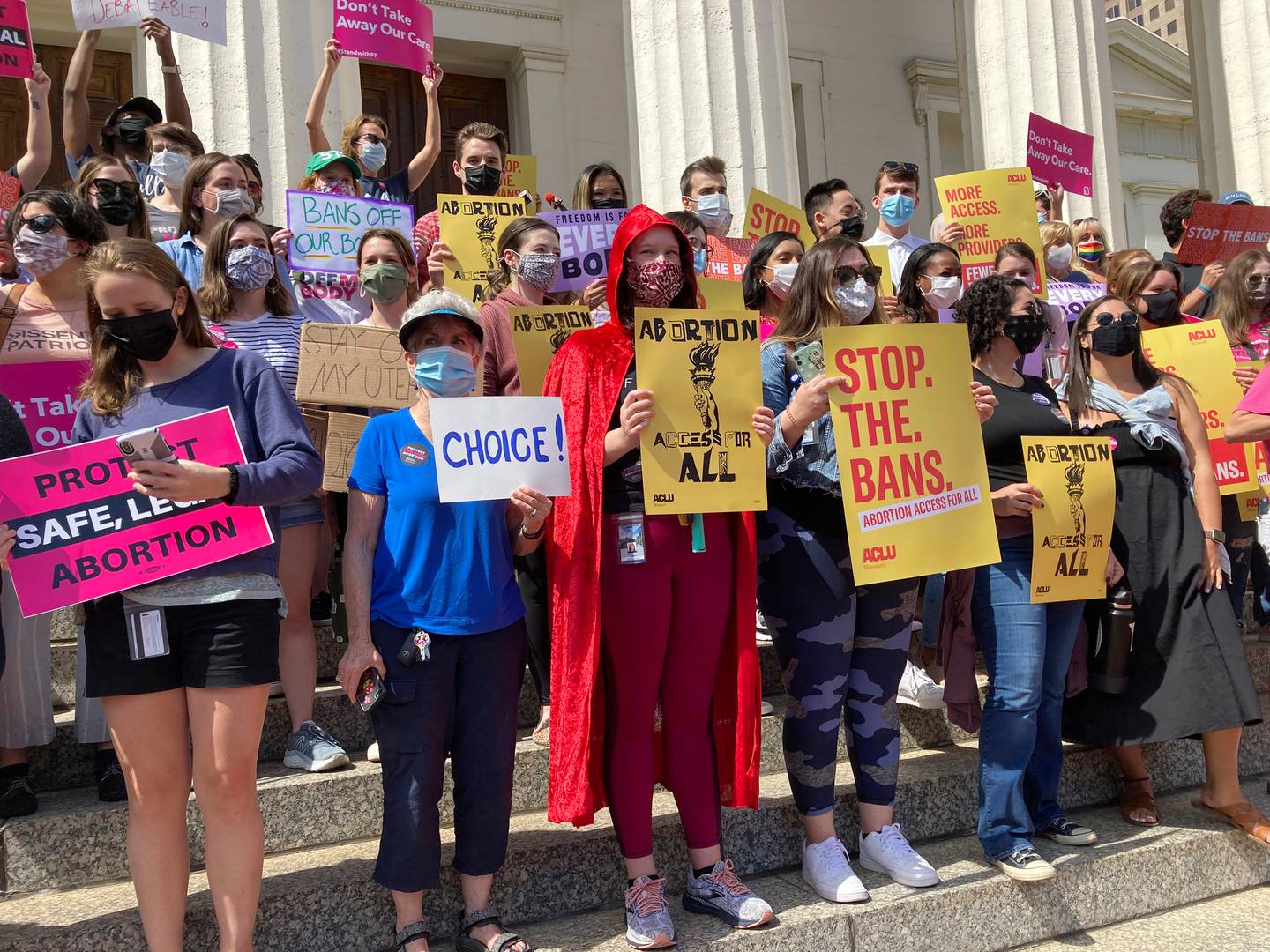 About 200 abortion rights demonstrators gathered outside the Old Courthouse in St. Louis, for a rally last month. Photo / AP

"This is not some kind of vigilante scheme," said Will Thompson, defending the law for the Texas Attorney General's Office. "This is a scheme that uses the normal, lawful process of justice in Texas."

If the Justice Department prevails, Texas officials would likely seek a swift reversal from the 5th US Circuit Court of Appeals, which previously allowed the restrictions to take effect.

In anticipation of Pitman possibly granting an injunction, physicians at Whole Woman's Health clinics this week gave patients found to have cardiac activity information to comply with another restriction requiring a 24-hour waiting period before an abortion, so that they would be ready to call those patients back in, Hagstrom Miller told the court.

Hope of an injunction, she said, "is one of the only things that is keeping us going day to day." 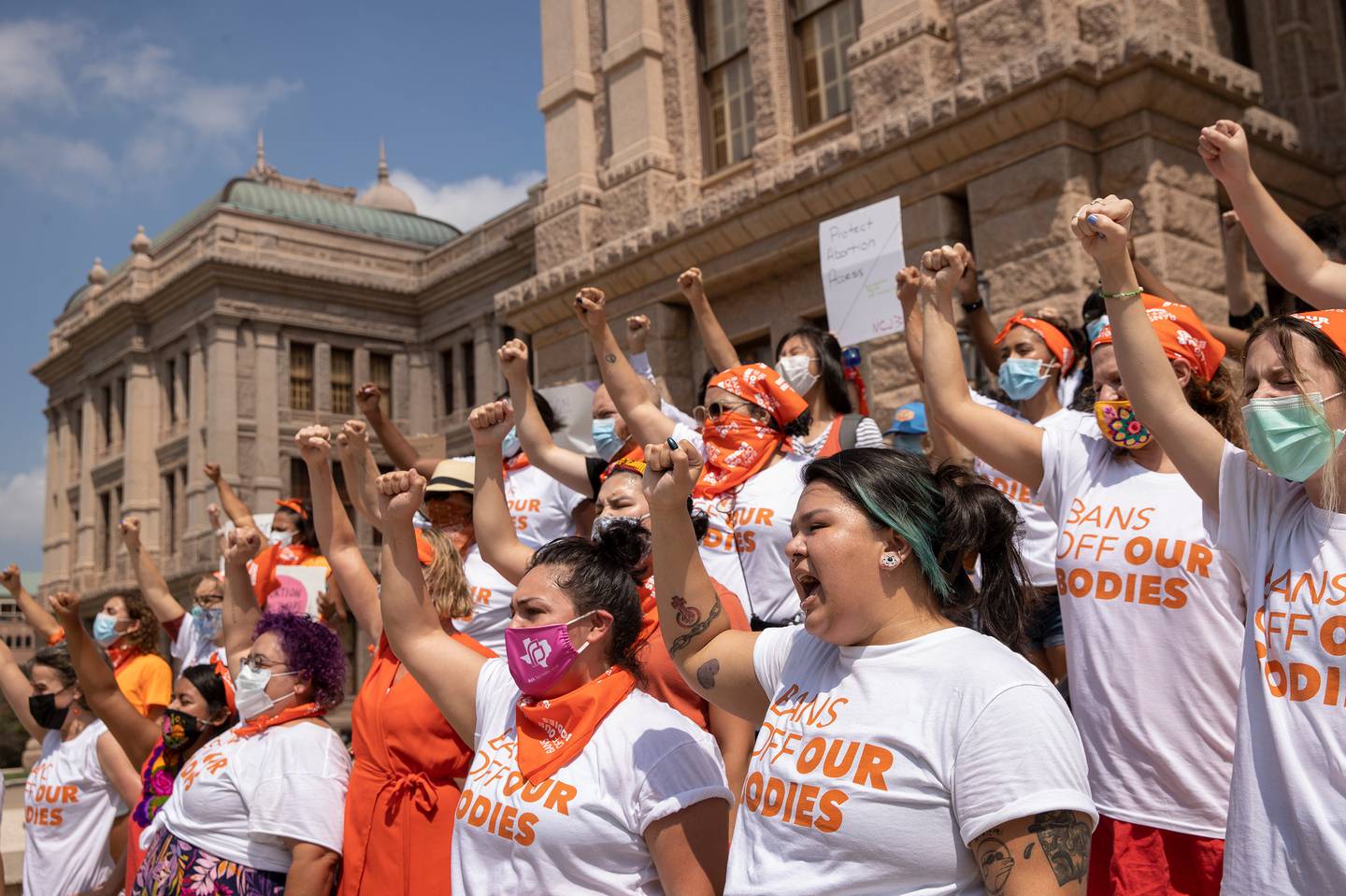 Women protest against restrictive abortion law at the Capitol in Austin, Texas. The law bans abortion before some women know they are pregnant, with no exceptions in cases of rape or incest. Photo /AP

The Texas law is just one that has set up the biggest test of abortion rights in the US in decades, and it is part of a broader push by Republicans nationwide to impose new restrictions on abortion.

On Monday, the US Supreme Court begins a new term, which in December will include arguments in Mississippi's bid to overturn 1973's landmark Roe v. Wade decision guaranteeing a woman's right to an abortion.

Last month, the court did not rule on the constitutionality of the Texas law in allowing it to remain in place. But abortion providers took that 5-4 vote as an ominous sign about where the court might be heading on abortion after its conservative majority was fortified with three appointees of former President Donald Trump.

Ahead of the new Supreme Court term, Planned Parenthood on Friday released a report saying that if Roe v. Wade were overturned, 26 states are primed to ban abortion. This year alone, nearly 600 abortion restrictions have been introduced in statehouses nationwide, with more than 90 becoming law, according to Planned Parenthood.

Other states, mostly in the South, have passed similar laws that ban abortion within the early weeks of pregnancy, all of which judges have blocked. But Texas' version has so far outmaneuvered courts because it leaves enforcement to private citizens, not prosecutors, which critics say amounts to a bounty.

Texas officials argued in court filings this week that even if the law were put on hold temporarily, providers could still face the threat of litigation over violations that might occur in the time between a permanent ruling.

"The federal government's complaint is that the Heartbeat Act is difficult to effectively enjoin," the state wrote in objection to the lawsuit by the Biden administration. "But there is no requirement that a state write its laws to make them easily enjoined."

At least one Texas abortion provider has admitted to violating the law and been sued — but not by abortion opponents. Former attorneys in Illinois and Arkansas say they instead sued a San Antonio doctor in hopes of getting a judge who would invalidate the law.