An influential head of an ultraconservative US evangelical college has reportedly resigned amid incredible allegations about his sex life.

Jerry Falwell Jr – who Donald Trump called "one of the most respected religious leaders in the US" after securing his endorsement – was already on leave after posting a photo of himself with trousers unzipped on Instagram.

Now, a former pool boy has revealed he had an affair with Mr Falwell's wife Becki, and that Mr Falwell liked to watch while they were having sex. 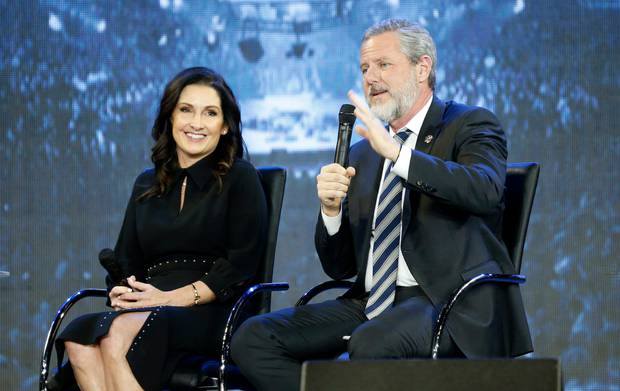 Rev. Jerry Falwell Jr., right, and his wife, Becky during after a town hall at a convocation at Liberty University in Lynchburg in 2018. Photo / AP

Giancarlo Granda says he was 20 when he met Jerry and Becki Falwell while working as a pool attendant at the Fontainebleau Miami Beach hotel in March 2012.

In an interview with Reuters, he said he began having a relationship with the couple – who have been married since 1987 – from that month until 2018.

"Becki and I developed an intimate relationship and Jerry enjoyed watching from the corner of the room," Mr Granda said in the interview.

He also shared screenshots of what he said was a FaceTime call last year between him and Mrs Fallwell – a prominent female voice on the conservative scene herself – as they discussed their relationship.

She allegedly appeared on the screen naked while they talked – as Mr Falwell peeked from behind a door.

Granda was first seen in public figure in the Falwells' circle two years ago, when BuzzFeed News reported that the couple had befriended and gone into business with him, buying a Miami Beach youth hostel in 2013.

Mr Granda's relationship has since soured with the couple and now he claims he was taken advantage of.

"Whether it was immaturity, naïveté, instability or a combination thereof, it was this 'mindset' that the Falwells likely detected in deciding that I was the ideal target for their sexual escapades,'' he told Reuters. 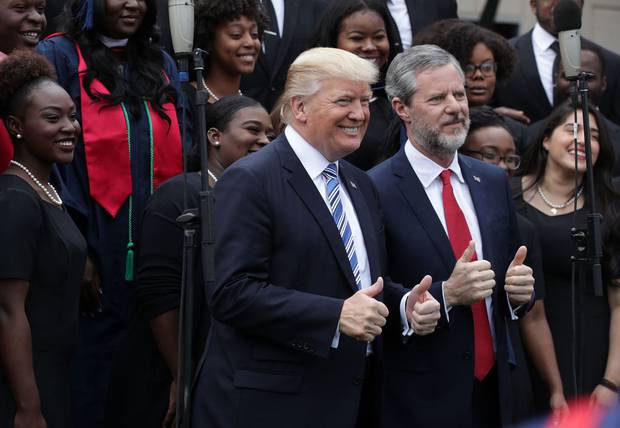 In his statement, obtained by the Washington Examiner, Mr Falwell said the affair led to stress, weight loss and the feeling that he was "living on a roller coaster".

Neither Mr Falwell nor his wife have commented on Mr Granda's description of the affair.
However, a spokesman for both Falwells said the claim that Mr Falwell observed the two having sex was untrue

In the statement, Mr Falwell said: "Becki had an inappropriate personal relationship with this person, something in which I was not involved."

A lawyer for Mr Falwell Jr told Reuters, before its article came out, that his client "categorically denies everything you indicated you intend to publish about him".

Mr Falwell, in his statement, claimed Mr Granda was trying to blackmail him and his wife.

"Even years after the improper relationship had ended, this person continued to be aggressive with Becki and me in a variety of ways. We finally decided that we had to further withdraw completely from him, which resulted in him stepping up his threats to share more outrageous and fabricated claims about us," Mr Falwell said.

Falwell was asked to take an 'indefinite leave of absence' after he posted this picture of himself posing with his wife's assistant at a costume party on Instagram.

"Eventually, he began threatening to publicly reveal this secret relationship with Becki and to deliberately embarrass my wife, family, and Liberty University unless we agreed to pay him substantial monies," he added.

The revelations are particularly damaging to Mr Falwell because of his powerful position as president of ultraconservative Liberty University, where students are forced to adhere to an "honour code'' that prohibits sex outside of marriage.

The college's honour code states that "sexual relations outside of a biblically ordained marriage between a natural-born man and a natural-born woman are not permissible at Liberty University".

Mr Fallwell was one of the first evangelical leaders to endorse Donald Trump when he ran for president. He remained a strong supporter after the President took office in 2017.

In June he apologised after deleting a much-criticised tweet that showed one person in black face and another in a Ku Klux Klan hood and robe.

In the photo, Mr Falwell is holding a cup of dark liquid and has one arm around a woman whose shorts are also unzipped. In a radio interview soon afterwards, Mr Falwell said the woman was his wife's assistant.

He said the pair were at a costume party and "it was just in good fun," but added he should never have posted the photo and said, "I've apologised to everybody and I promised my kids I'm going to try to be a good boy from here on out."

A school official confirmed on Monday that Mr Falwell had agreed to resign as president of Liberty University, the Washington Post reports. No official reason has yet been given for his departure.

"I have not resigned. I will be on indefinite leave," Falwell later told POLITICO.

When a reporter asked a spokesperson for Liberty University whether Falwell had resigned, the spokesperson answered affirmatively. The university said a statement would be "forthcoming".