Mariupol appeared on the verge of falling to the Russians as Ukraine moved to abandon the steel plant where hundreds of its fighters had held out for months under relentless bombardment in the last bastion of resistance in the devastated city.

The capture of Mariupol would make it the biggest city to be taken by Moscow's forces yet and would give the Kremlin a badly needed victory, though the landscape has largely been reduced to rubble.

More than 260 Ukrainian fighters — some of them seriously wounded and taken out on stretchers — left the ruins of the Azovstal plant on Monday and turned themselves over to the Russian side in a deal negotiated by the warring parties. Ukrainian authorities said they were working to extract the remaining soldiers from the sprawling steel mill. They would not say how many were still there.

Russia called it a surrender. The Ukrainians avoided using that word and instead said that its garrison had completed its mission and that there was no way to rescue its members militarily in the otherwise Russian-held city. 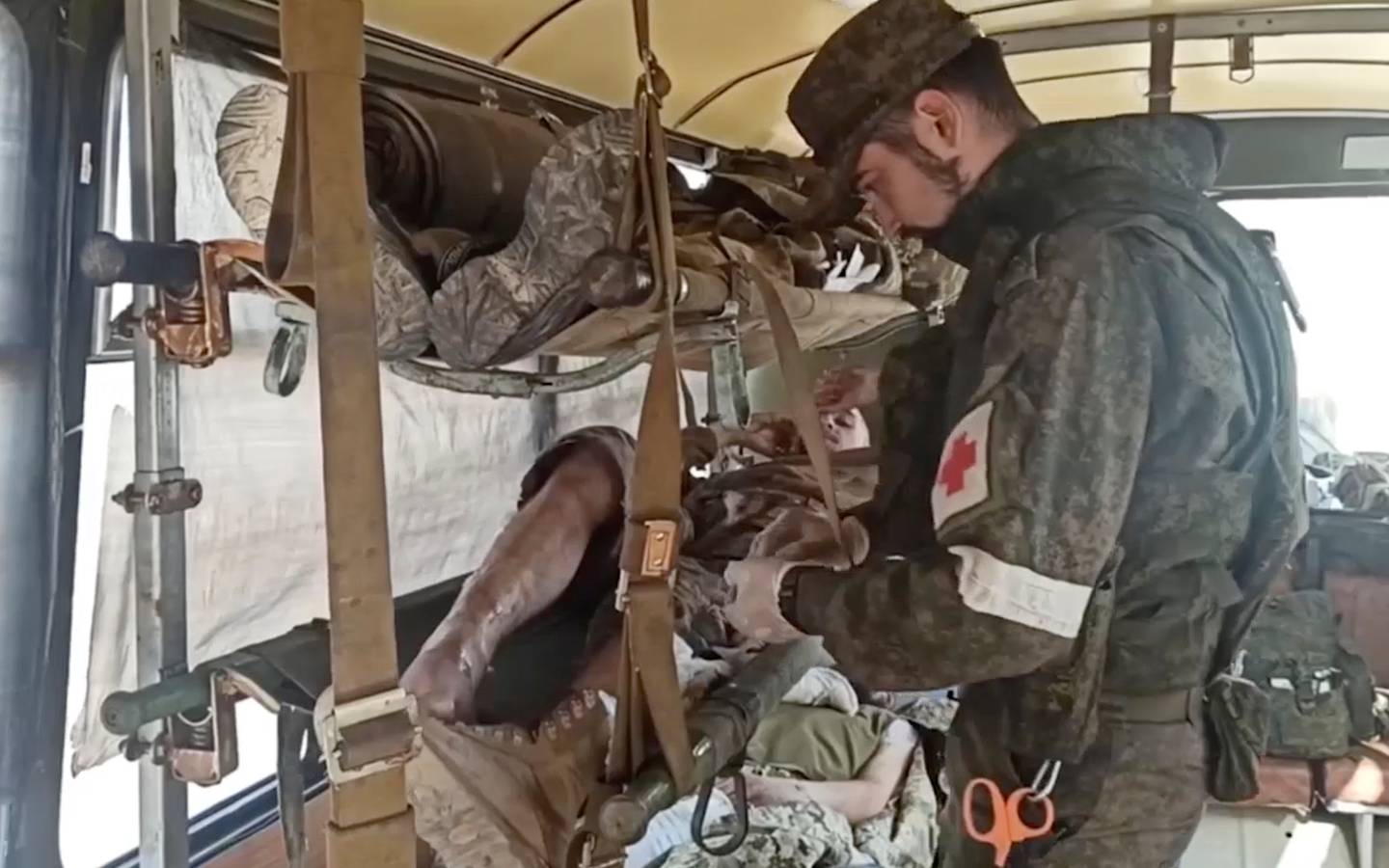 Wounded Ukrainian servicemen receive treatment in a bus as they are being evacuated. Photo / Russian Defense Ministry Press Service via AP

"Ukraine needs Ukrainian heroes to be alive. It's our principle," Ukrainian President Volodymyr Zelenskyy said in announcing that troops had begun leaving the mill and its labyrinth of tunnels and bunkers.

Ukrainian Deputy Defence Minister Hanna Maliar expressed hope that the fighters would be exchanged for Russian prisoners of war. But Vyacheslav Volodin, speaker of the lower house of the Russian parliament, said without evidence that "war criminals" were among the defenders and that they should not be exchanged but tried.

The operation to abandon the steel plant signalled the beginning of the end of a nearly three-month siege that turned Mariupol into a worldwide symbol of defiance and suffering.

The Russian bombardment killed more than 20,000 civilians, according to the Ukrainian side, and left the remaining inhabitants — perhaps one-quarter of the southern port city's prewar population of 430,000 — with little food, water, heat or medicine.

During the siege, Russian forces launched lethal airstrikes on a maternity hospital and a theatre where civilians had taken shelter. Close to 600 people may have been killed at the theatre. Part of a damaged apartment in Mariupol, in territory under the government of the Donetsk People's Republic, eastern Ukraine. Photo / AP

Gaining full control of Mariupol would give Russia an unbroken land bridge to the Crimean Peninsula, which it seized from Ukraine in 2014, and deprive Ukraine of a vital port. It could also free up Russian forces to fight elsewhere in the Donbas, the eastern industrial heartland that the Kremlin is bent on capturing.

And it would give Russia a victory after repeated setbacks on the battlefield and diplomatic front, beginning with the abortive attempt to storm Kyiv, the capital.

Over the past few days, Sweden and Finland announced plans to apply for Nato membership, and Ukraine reported that Moscow's forces had retreated from around the northeastern city of Kharkiv in the face of counterattacks and had taken heavy losses in a Ukrainian assault on a pontoon bridge in the Donbas.

The Russian victory, though, is mostly symbolic, said Phillips O'Brien, professor of strategic studies at the University of St Andrews in Scotland.

Ukrainian presidential adviser Mykhailo Podolyak likened the Ukrainian defenders to the vastly outnumbered Spartans who held out against Persian forces in ancient Greece. "83 days of Mariupol defence will go down in history as the Thermopylae of the XXI century," he tweeted.

The soldiers who left the plant were given pat-down searches, loaded onto buses accompanied by Russian military vehicles, and taken to two towns controlled by Moscow-backed separatists. More than 50 of the fighters were seriously wounded, according to both sides.

Russia's main federal investigative body said it intends to interrogate the troops to "identify the nationalists" and determine whether they were involved in crimes against civilians. Also, Russia's top prosecutor asked the country's Supreme Court to designate Ukraine's Azov Regiment, whose members have been holding out at Azovstal, a terrorist organisation. The regiment has links to the far right.

A negotiated withdrawal could save lives on the Russian side, too, sparing its troops from what almost certainly would be a bloody battle to finish off the defenders inside the plant, which sprawls over 11 square kilometres.

The withdrawal could also work to Moscow's benefit by taking the world's attention off the suffering in Mariupol. 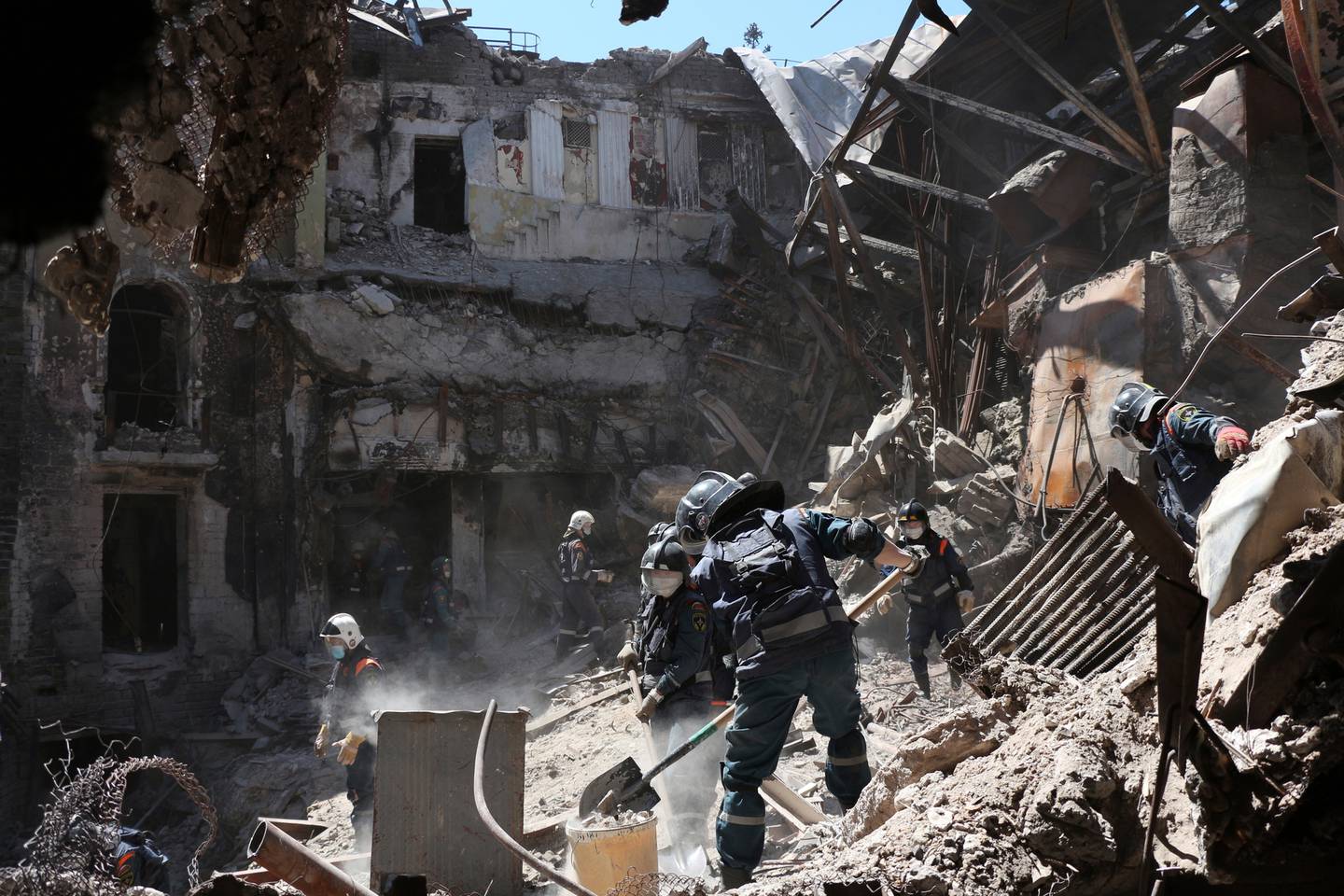 Retired French Vice Admiral Michel Olhagaray, a former head of France's centre for higher military studies, said Azovstal's fall would be more of a symbolic boost for Russian President Vladimir Putin than a military one, since "factually, Mariupol had already fallen".

"Now Putin can claim a 'victory' in the Donbas," Olhagaray said.

But because the Azovstal defenders' "incredible resistance" tied down Russian troops, Ukraine can also claim that it came out on top.

"Both sides will be able to take pride or boast about a victory — victories of different kinds," he said.

While the focus of the fighting has shifted eastward in the Donbas, that, too, has turned into a slog.

Strikes have also occasionally hit other areas of the country. The western city of Lviv was rocked by loud explosions early Tuesday. Witnesses counted at least eight blasts. The sky west of the city, which was under an overnight curfew, was lit up by an orange glow.

The governor of the Lviv region, Maksym Kozytskyy, said Russian strikes targeted railroad and military facilities around Yavoriv, west of the city.

The Yavoriv area, which is just a short drive from the Polish border, has been the target of previous Russian strikes apparently aimed at slowing the flow of weapons and other supplies coming from Western countries. A Russian strike in March also killed 35 people at Yaroviv military training base.

In other developments, the chief prosecutor for the International Criminal Court prosecutor, Karim Khan, said he sent 42 investigators, forensic experts and support personnel to Ukraine to look into suspected war crimes. Ukraine has accused Russian forces of torturing and killing civilians.