Joe Biden has reportedly told his Ukrainian counterpart to "prepare for impact" of a near-certain Russian invasion, prompting pushback during a "long and frank" phone call that "did not go well".

The US President on Thursday spoke with Volodymyr Zelensky, who disagreed with Biden over the "risk levels" of a possible Russian attack, a senior Ukrainian official told CNN.

A senior Ukrainian official says the Biden-Zelensky call "did not go well" and Biden told Zelensky a Russian invasion is virtually certain, warning the country should prepare for impact. US President Joe Biden speaks during a news conference in the East Room of the White House in Washington on Wednesday, January 19. (Photo / AP)

The official said Zelensky restated Ukraine's position that the threat from Russia remains "dangerous but ambiguous" – but Biden disagreed, saying an invasion was now virtually certain once the ground had frozen over later in February.

Biden reportedly warned that the Ukrainian capital Kiev could be "sacked" by Russian forces, that Ukraine would not be getting help in the form of US troops or sophisticated weapons, and to "prepare for impact".

In response, Zelensky reportedly urged his counterpart to "calm down the messaging".

The White House pushed back on the CNN report late on Thursday.

"President Biden said that there is a distinct possibility that the Russians could invade Ukraine in February. He has previously said this publicly and we have been warning about this for months. Reports of anything more or different than that are completely false."

"Also, no one said 'sacked'," she said. "The only person who should be 'sacked' is the anonymous source who is circulating an inaccurate portrayal of this conversation."

According to a White House read-out of the call, Biden "reaffirmed the readiness of the United States along with its allies and partners to respond decisively if Russia further invades Ukraine".

"He also underscored the commitment of the United States to Ukraine's sovereignty and territorial integrity," it said. It comes after China told the US that Russia has "reasonable security concerns" and tensions with Ukraine "should be taken seriously".

Meanwhile, the US has warned the Nord Stream 2 gas pipeline will not open if Russia invades Ukraine.

Foreign Minister Wang Yi made the comments in a video call on Thursday with US Secretary of State Antony Blinken, who urged China to use its influence with Russia to discourage an invasion of Ukraine.

"We call on all parties to remain calm and refrain from doing things that stimulate tension and hype up the crisis," the Chinese Foreign Ministry said in a readout of the call.

"Today in the 21st century, all parties should completely abandon the Cold War mentality and form a balanced, effective and sustainable European security mechanism through negotiations, and Russia's reasonable security concerns should be taken seriously and resolved."

Wang also warned his counterpart that "pressure will only make the Chinese people more united, and confrontation will not prevent China from becoming stronger".

He said the "top priority right now is that the US should stop interfering with the Beijing Winter Olympics" and stop "playing with fire" on Taiwan.

In its much briefer readout, the US State Department said Blinken "underscored the global security and economic risks posed by further Russian aggression against Ukraine and conveyed that de-escalation and diplomacy are the responsible way forward".

"The Secretary and Councilor Wang also exchanged views on how to advance work together following President Biden's virtual meeting with President Xi on November 15, 2021, including on managing strategic risk, health security, and climate change," it said. 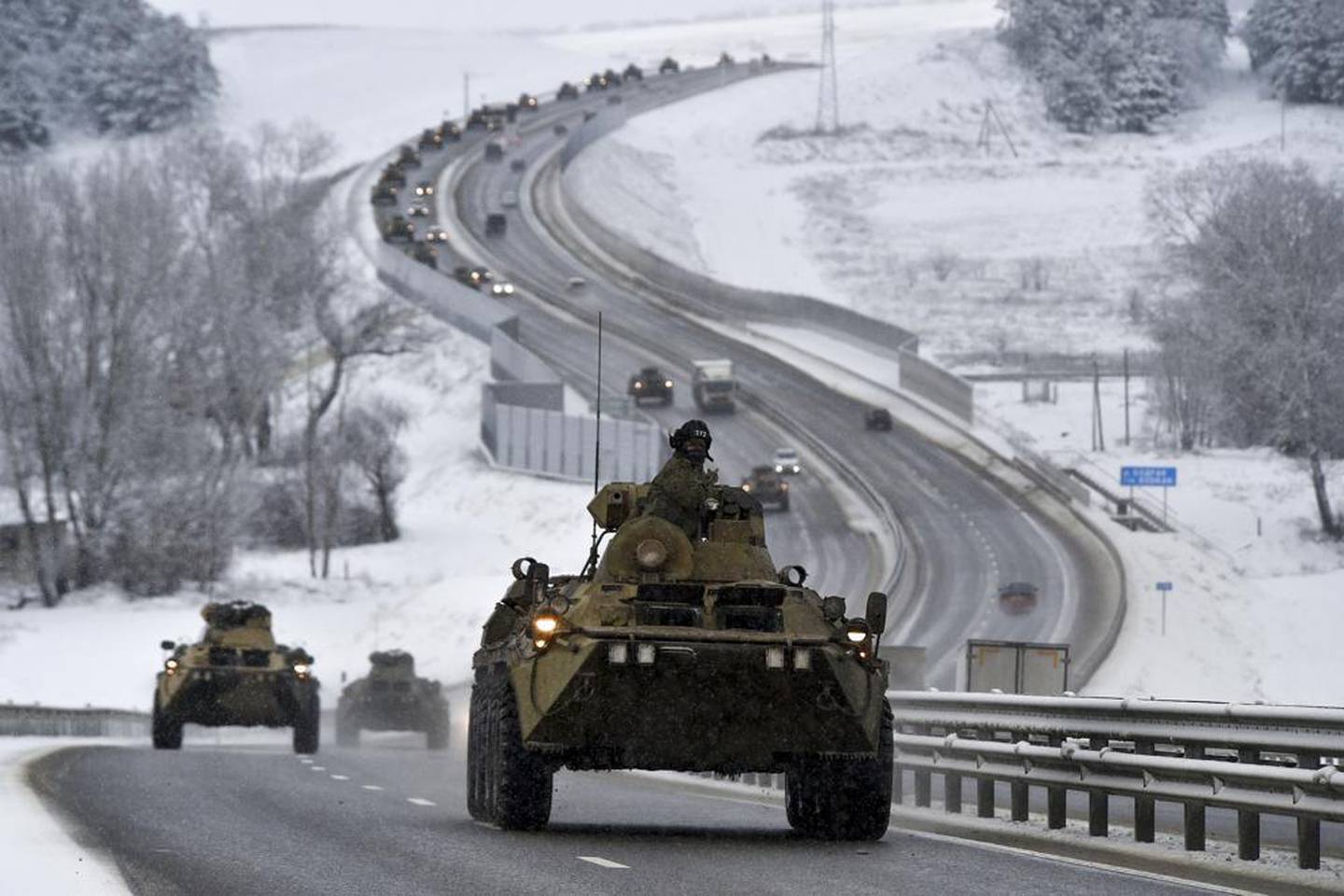 A convoy of Russian armoured vehicles moves along a highway in Crimea on Tuesday, January 18. (Photo / AP)

Victoria Nuland, the State Department's number three official, told reporters the US was "calling on Beijing to use its influence with Moscow to urge diplomacy because if there is a conflict in Ukraine, it is not going to be good for China either".

"The PRC has a relationship with Russia that is distinct from the one that we have with Russia," State Department spokesman Ned Price added. "The PRC does have a relationship that would allow it to use its influence in a manner that we hope to be constructive."

It came as Russia said Thursday that the US was failing to address its main security concerns over Ukraine but left the door open to further talks to ease tensions.

Amid continued fears Russia could invade its pro-Western neighbour, Washington and Berlin also warned they could target the controversial Nord Stream 2 pipeline, which is set to double supplies of cheap natural gas from Russia to Germany.

Relations between Russia and the West have reached their lowest point since the Cold War after Moscow deployed tens of thousands of troops on the border of Ukraine.

Russia denies any plans to invade but last month demanded wide-ranging security guarantees from the West, including that Ukraine never be allowed to join the US-led Nato military alliance.

Washington on Wednesday delivered a reply in co-ordination with Nato allies, rejecting a ban on Ukraine joining, but offering a new "diplomatic path" out of the crisis.

In its first reaction to the reply, the Kremlin was unimpressed but cautious.

"It cannot be said that our views were taken into account," President Vladimir Putin's spokesman Dmitry Peskov told reporters. "Let's not rush into assessments, it takes time to analyse," he said.

He added that the documents were with Putin. Russian Foreign Minister Sergei Lavrov said Moscow's chief concern — the potential for Ukraine to join Nato — had been ignored, but it would be possible to move forward on other issues.

"There is a response which gives hope for the start of a serious conversation on secondary questions," Lavrov said. 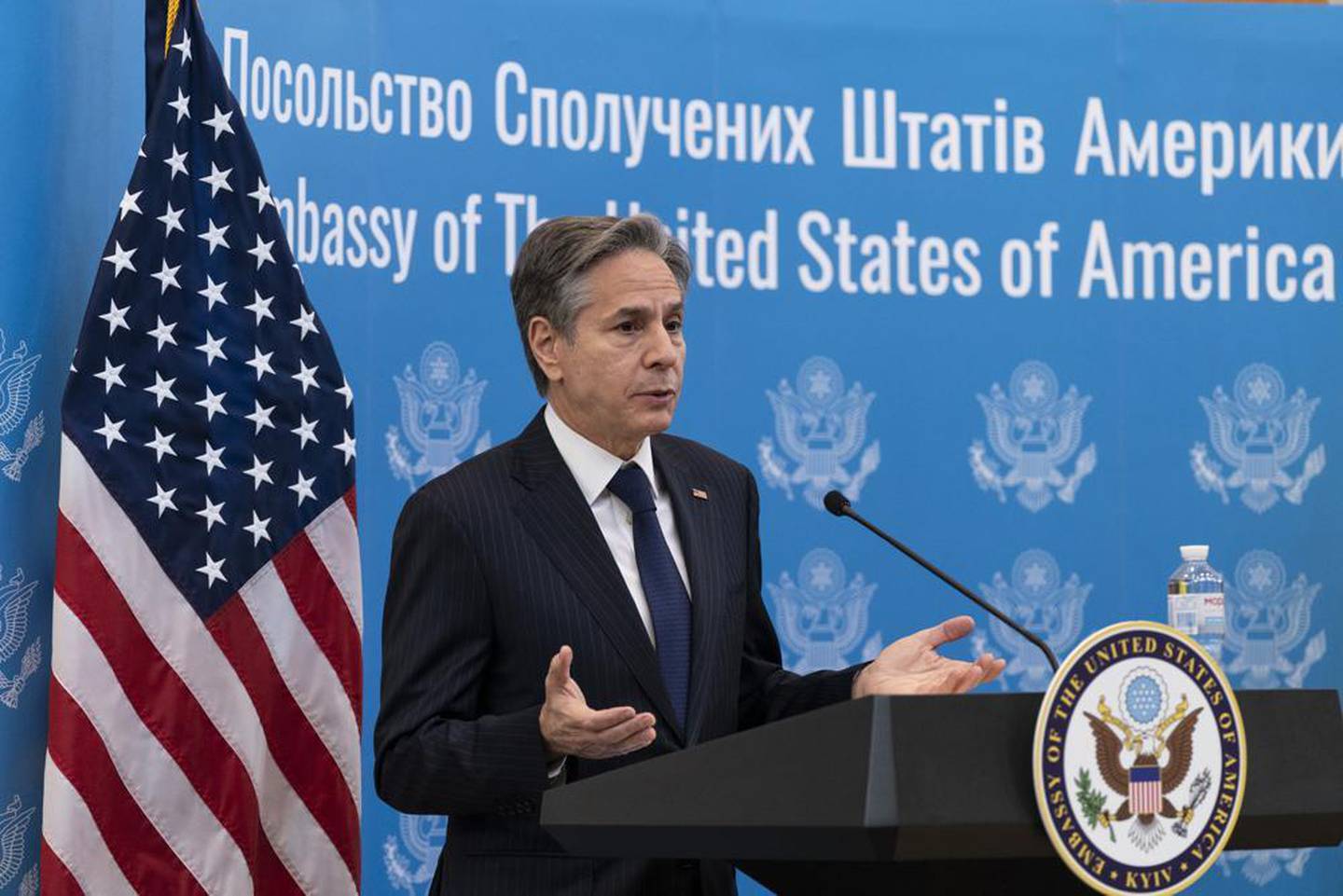 United States Secretary of State Antony Blinken speaks as he greets embassy staff at the US embassy in Kyiv, Ukraine, on Wednesday, January 19. (Photo / AP)

Blinken said on Wednesday he would speak to Lavrov again in the coming days and that the US response "sets out a serious diplomatic path forward should Russia choose it".

He renewed an offer of "reciprocal" measures including reductions of missiles in Europe and transparency on military drills and Western aid to Ukraine.

But he made clear that the US would not budge on Russia's core demand that Ukraine never be allowed to join Nato.

'Ukraine in the middle'

The US has warned of severe and swift consequences if Russia invades, including possible personal sanctions on Putin.

Price told National Public Radio that despite concerns over gas supplies to Europe, the Nord Stream 2 pipeline was a possible target.

"If Russia invades Ukraine, one way or another, Nord Stream 2 will not move forward, and we want to be very clear about that," he said.

The pipeline was completed in September but has not yet been approved by Germany for use.

Initially wary of linking Nord Stream 2 to the Ukraine crisis, Berlin has increasingly warned of potential consequences for the pipeline.

"We are working on a strong package of sanctions (with Western allies, and it covers several aspects) including Nord Stream 2," Foreign Minister Annalena Baerbock told parliament on Thursday.

On the streets of Kiev, there were concerns that Ukraine had been forgotten amid the high-level talks between Moscow, Nato and Washington.

"Honestly, I don't care who is provoking whom, what matters to me is that there is peace. I don't care about the rest." 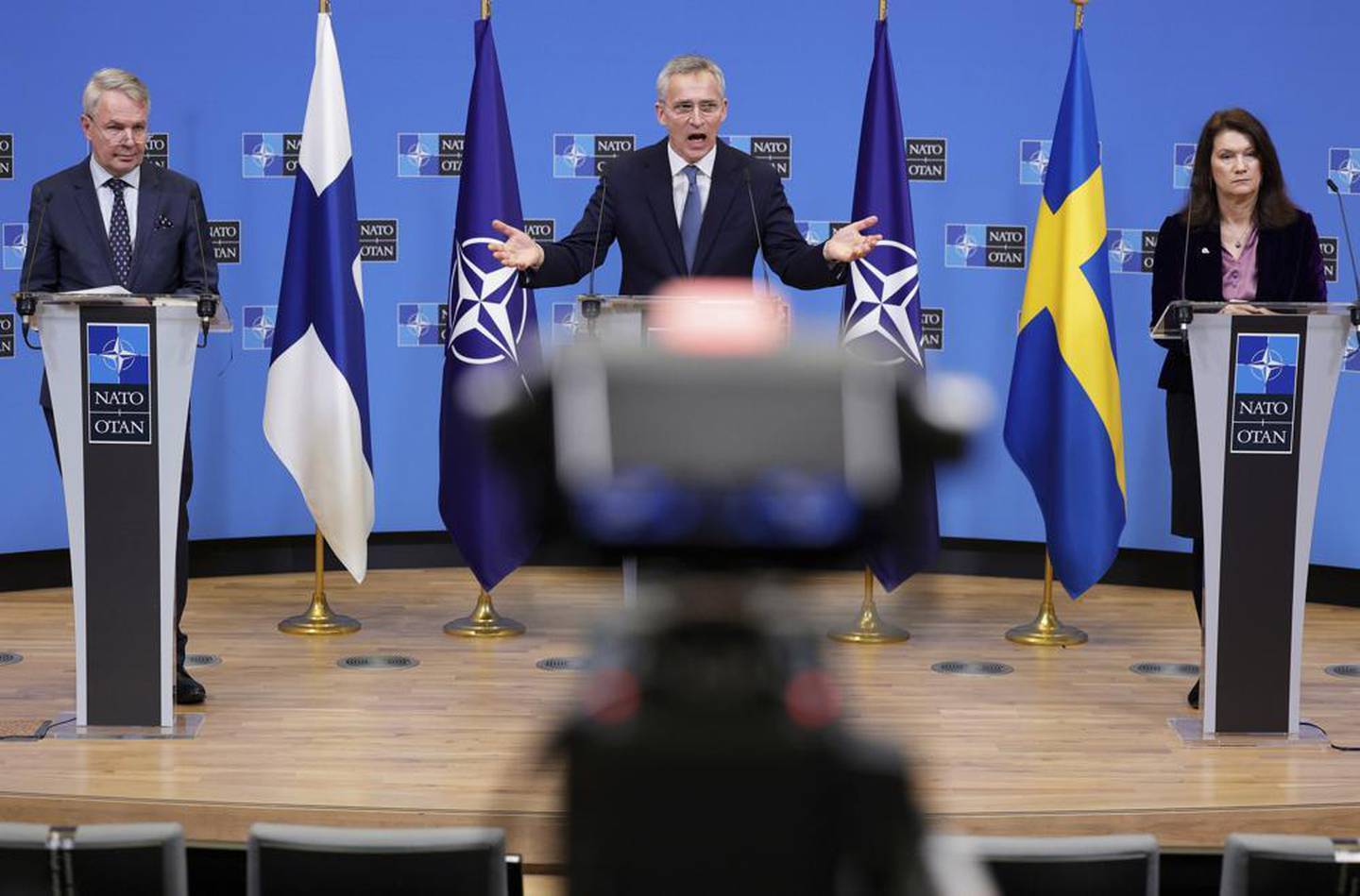 Russia, which has a fraught historical relationship with Ukraine, has fuelled an insurgency in the former Soviet republic's east that has killed more than 13,000 people since 2014.

That year Russia also seized Crimea after the overthrow of a pro-Russian government in Kiev.

The current crisis has seen Nato put 8500 troops on standby. The alliance's secretary general Jens Stoltenberg said on Wednesday while it was working towards de-escalation, "we are also prepared for the worst".

In another bid to defuse tensions, senior Russian and Ukrainian officials met for eight hours in Paris with representatives of France and Germany on Wednesday.

Dmitry Kozak, the Kremlin deputy chief of staff, said the talks were "not simple" but another round would take place in two weeks in Berlin.

France said after the so-called Normandy Format talks the envoys committed to a fragile July 2020 ceasefire in eastern Ukraine between government forces and pro-Moscow separatists.

Ukrainian President Volodymyr Zelensky "positively assesses the fact of the meeting, its constructive nature, as well as the intention to continue meaningful negotiations in two weeks in Berlin," his press service said in a statement on Thursday.