Two people are reported missing and dozens more have been forced to seek shelter in evacuation centres as Tropical Cyclone Tino passes over Fiji.

The storm's been upgraded to a category two overnight with winds up to 140km/h, and flooding reported in parts of Vanua Levu and Taveuni.

The Fiji Metservice says Tino is still intensifying and moving southeast in the direction of Tonga.

The Fiji Disaster Management Office says it's pre-positioned some relief supplies that can be used as soon as the cyclone passes over Vanua Levu.

Director Vaisiti Soko told RNZ already over 100 people are being looked after in evacuation centres across the country.

He said indirectly related to the cyclone police are still searching for a father and daughter who were swept away in the Central Division on Viti Levu while trying to cross a river in bad weather.

WeatherWatch NZ says Tino will be north east of New Zealand by Monday as an ex-cyclone. There was currently no direct threat to New Zealand.

The centre of the storm will be very close to Tonga by 6pm Saturday, and with a potential a direct hit from the centre as a category 2 tropical cyclone, or it will brush the island incredibly closely.

Torrential rain, damaging winds and dangerous seas can be expected across Saturday and tonight.

It will be gone and clearing by Sunday morning, with winds easing.

Tino will become an ex-tropical cyclone this weekend as it moves far enough south from warm waters.

WeatherWatch NZ expects the remnants of the storm to grow and intensify well to the country's east into a much larger extra tropical low. 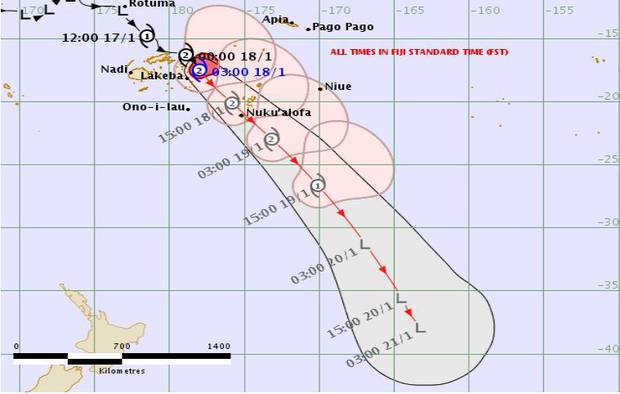 "This storm is a long way offshore and shouldn't affect New Zealand's weather at this stage - but the big size and close nature means it's worthy of WeatherWatch issuing alerts for eastern beaches of the North Island with Monday and especially Tuesday the highest risk for more dangerous conditions in the water.

"Swells over four metres may be generated around some parts."

Meanwhile, weather on land will likely be hot, sunny and settled in many places, masking the offshore dangers bringing random large waves and stronger than normal rips and currents. Tino is the third tropical cyclone over the season - which runs from November to April - following Cyclone Sarai which struck both Tonga and the Lau Group in Fiji just a few weeks ago, and Cyclone Rita which formed at the end of November.

Normally about 10 tropical cyclones form in the Southwest Pacific Basin over the season.

Niwa and MetService predict about nine to 12 cyclones will form, with elevated activity late in the season, from February to April.

Tropical cyclones are categorised in strength from 1 to 5, with 5 being the most intense.

For the coming season, about four storms are expected to reach at least Category 3 strength, with mean wind speeds of at least 118 km/h.

Past years with conditions similar to this one suggest several storms that develop could intensify to at least Category 3 strength. 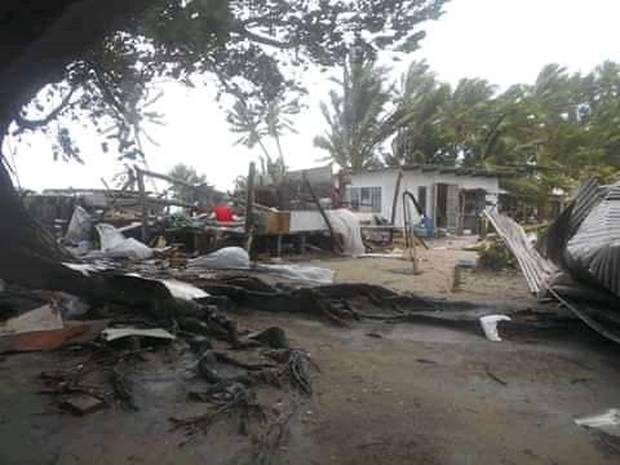 Category 5-strength cyclones, where wind gusts exceed 199 km/h, have occurred in some years with similar conditions leading into the 2019/20 season.

Cyclones are essentially low-pressure systems that form and build over warm waters in the tropics - but with extreme characteristics.

Gale-force winds - or those higher than 63km/h - are found at low levels near their swirling centres but can fan out for hundreds of kilometres.

Meteorologists consider a "severe tropical cyclone" to be one that blasts as hard as 118km/h.

At least one comes within 550km of New Zealand each year, usually around February and March.

To get this far south, they have to make their way over much colder waters, while hitting strong upper-level winds as they move out of the tropics.

By the time they arrive, they are almost always reclassified as "ex-tropical" cyclones.

That does not mean they have weakened or been downgraded, but rather that they've morphed into a completely different beast.

And ex-tropical cyclones still pack the potential for severe weather.

Under the right conditions, they can intensify and even muster lower pressures than they had before being reclassified.