During his first year in office, US President Joe Biden took action on a number of his key campaign promises, from rebuilding US alliances globally to distributing vaccines across America and the world.

But others remain works in progress, or dependent on Congress to address. That's particular true of his promises to reform the nation's immigration system, where Biden is caught between the demands of his Democratic base and Latino voters, and the realities of a steep influx of migrants to the US.

A look at where Biden stands on some of his key promises as he rounds out his first year:

- Reach a semblance of normalcy by Christmas 2021.

Broken. The Delta and then the Omicron variants drove fresh records in infections, spikes in hospitalisations, business closures and shortages of goods nationwide over the holiday season.

In progress. In December, Biden pledged to provide 500 million rapid tests amid a surge in the highly transmissible Omicron variant, and announced plans last week to distribute an additional 500 million tests. A distribution website launches on Wednesday (tomorrow NZT) in the US.

- Provide 100 million vaccine shots to Americans in his first 100 days, and vaccinate 70 per cent of the world's population against Covid by September 2022.

In progress. Biden surpassed the domestic vaccination goal, but only about 61 per cent of the world's population has received one dose.

- Safely reopen a majority of K-8 schools and keep them open.

Mostly accomplished. Schools are largely back to in-person learning, but the Omicron surge has caused closures and other issues in a handful of school districts nationwide.

Done; the bill passed last March. It also delivered on his promise to provide US$2,000 in direct aid payments to Americans. 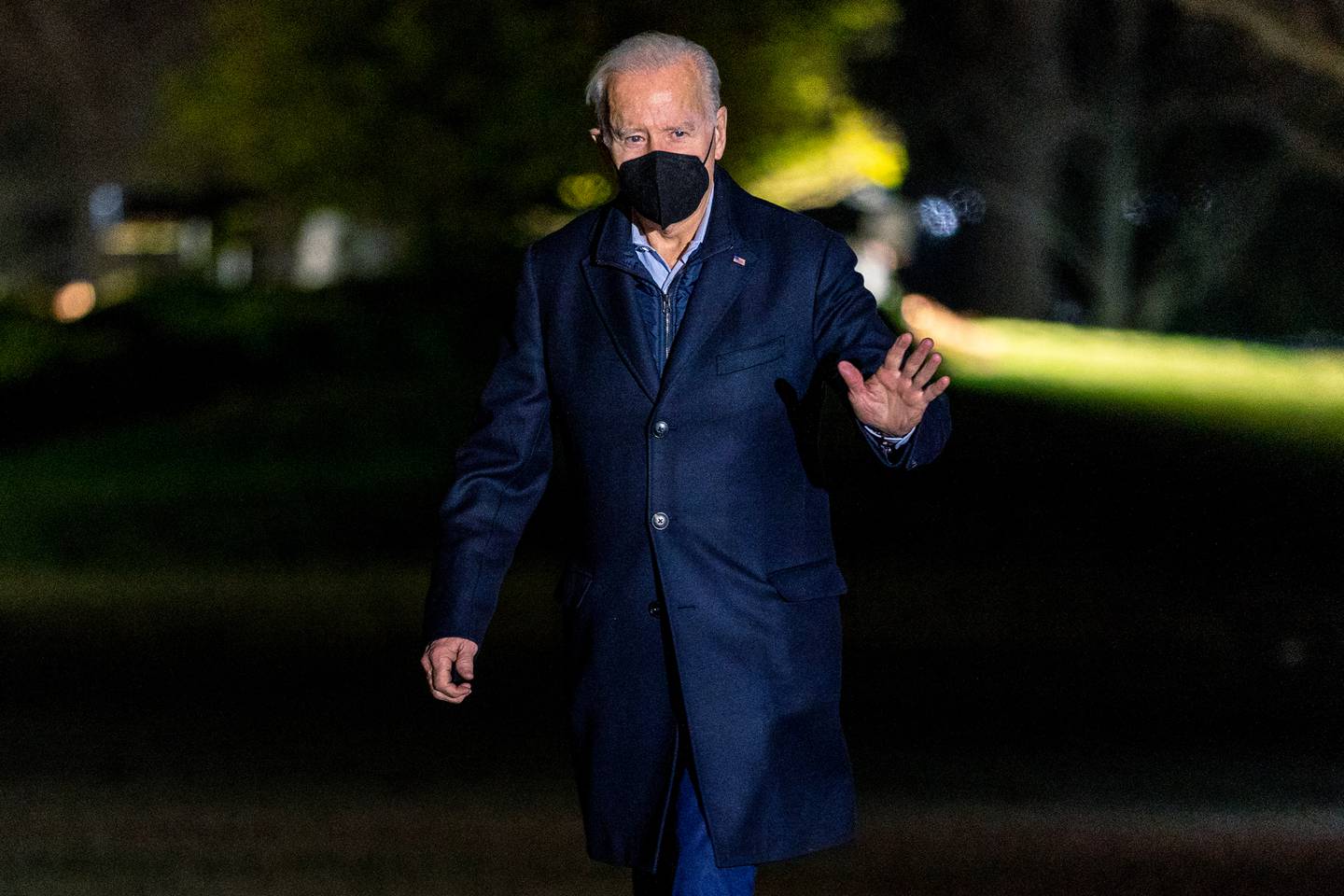 US President Joe Biden arrives at the White House in Washington on January 17. Photo / AP

Broken. The administration has proposed reforms to the nation's oil and gas leasing programme, but hasn't embraced a full ban.

Broken. Biden's social and environmental spending package included tax hikes on corporations and the wealthy, but the bill is currently stalled in the Senate.

- Order a review of US supply chains. 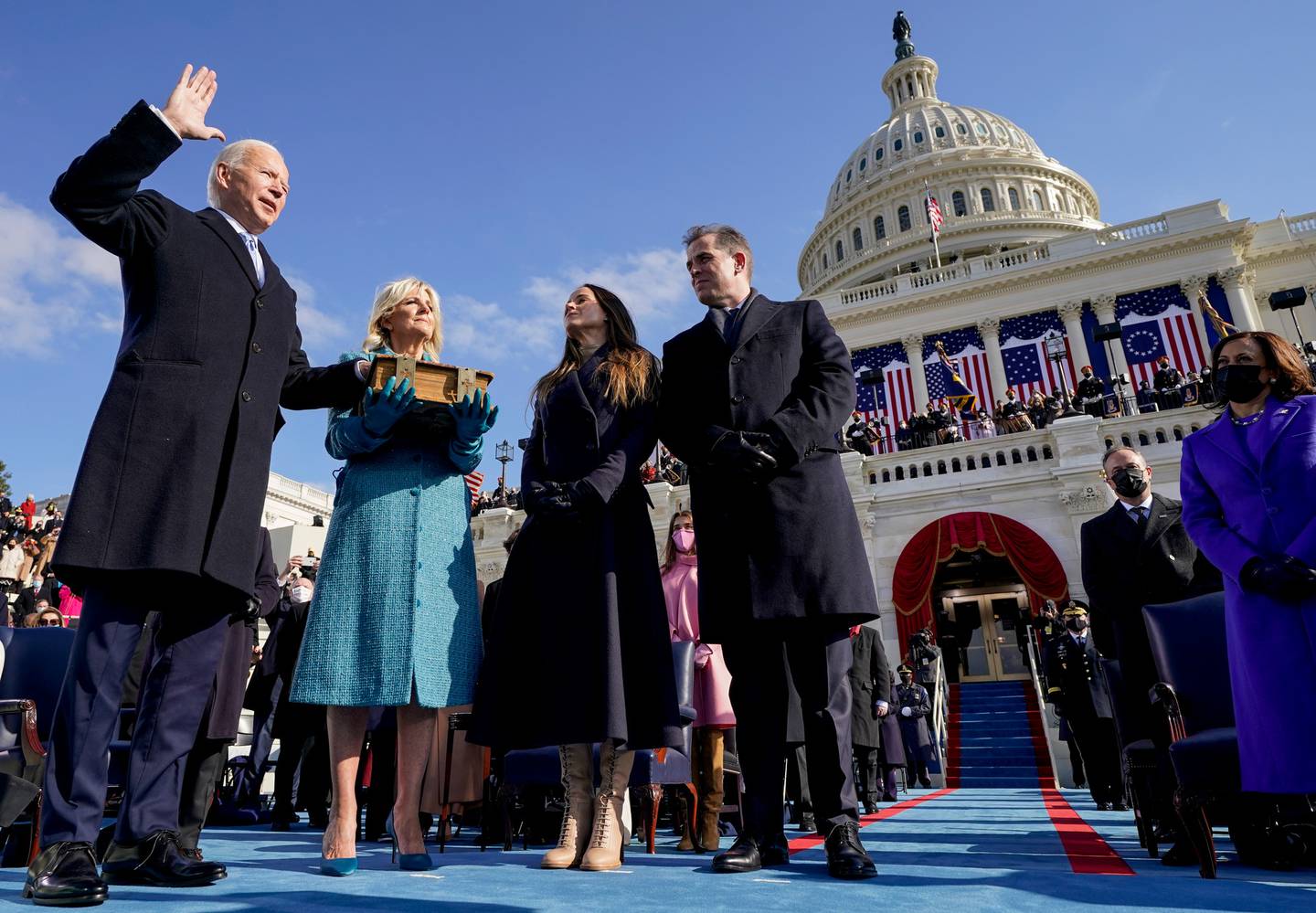 Joe Biden is sworn in as the 46th president of the United States as Jill Biden holds the Bible during the 59th Presidential Inauguration at the US Capitol in Washington, on Jan. 20, 2021. Photo / AP

Not close. Biden signed an executive order in February raising the cap to 62,500 refugees.

- Surge humanitarian resources to the border and encourage public-private partnerships to deal with an increase in migration there.

Yes, but officials have still struggled to deal with the influx of migrants at the border. Biden signed an executive order asking officials to prepare plans for using humanitarian resources there. He has yet to establish new public-private partnerships.

- Reform the US asylum system.

Incomplete. Biden signed an executive order in February directing his officials to craft a strategy for migration, including refugees and asylum seekers, and while he promised last year to implement a new "humane" asylum system, there's been no sign of specifics from the White House. And the Biden administration has continued a Trump-era policy that allows Customs and Border Protection to quickly expel migrants who enter the country without authorisation to avoid the spread of Covid-19.

- Reverse Trump-era policies on travel restrictions on people from a number of Muslim-majority countries, funding and building the border wall, a provision discouraging migrants from using public benefits, and one expanding criteria for deporting immigrants.

- Streamline and improve the naturalisation process for green-card holders.

In progress. Biden signed an executive order in February to improve the naturalisation process, and the Department of Homeland Security has since revoked some Trump-era rules.

- End family separation policy and create a task force to reunite families separated at the border.

Done. Biden signed executive orders ending the policy and establishing a task force focused on reuniting families. Only a handful of families have been reunited thus far due to difficulties locating the parents.

- Protect young immigrants brought to the US illegally by their parents by reinstating the Obama-era policy defending them and their families from deportation.

In progress. Secretary Alejandro Mayorkas said in March his agency was issuing a rule to "preserve and fortify" the policy, which would deprioritise young immigrants from deportation, but the policy itself is still facing challenges in court.

- End prolonged migrant detention and invest in a case-management system to process people.

Broken. There's been no announcement of added investments in case-management systems. While the administration said in March it would attempt to release parents and children within 72 hours of their arrival, officials acknowledged that hundreds of children have been held by Border Patrol for much longer. The administration is struggling with an increase in unaccompanied minors arriving at the border and a lack of facilities to house them. US President Joe Biden leaves after speaking about the coronavirus pandemic in the East Room of the White House in Washington, on August 3, 2021. Photo / AP

Abandoned. The Biden administration decided to scrap the idea based on input from civil rights groups and police unions.

- Direct US Attorney-General to deliver a list of recommendations for restructuring the Bureau of Alcohol, Tobacco, Firearms and Explosives and other Justice Department agencies to better enforce gun laws.

- Direct FBI to issue report on delays in background checks for gun purchases.

- "End the forever wars in Afghanistan and the Middle East" and terminate US involvement in the Yemen civil war.

Mixed. The US ended the 20-year war in Afghanistan in August, albeit in a bloody and chaotic fashion. The administration, however, announced in November it would sell US$650 million worth of air-to-air missiles to Saudi Arabia, a central player in the Yemen conflict.

- Put human rights at the centre of foreign policy.

- Improve ties with allies who had rocky relations with Trump.

Mixed. Biden won praise from allies for his efforts to reclaim US leadership on climate issues. Indo-Pacific leaders have been pleased by co-ordination efforts on China policy. Biden acknowledged his administration stumbled with the rollout of a deal to provide nuclear submarine technology to Australia, a move that torpedoed a US$66 billion French deal and led to Paris temporarily recalling its ambassador to Washington. His decision to move forward with the US military withdrawal in Afghanistan rankled some NATO allies who sought to extend the mission to stave off a Taliban takeover.

- Quickly rejoin the nuclear deal with Iran so long as Tehran comes back into compliance.