In its first update since the eruption, the Tongan government confirmed three deaths — two local residents and a British woman - and concerns remain over the fate of people on two hard-hit smaller islands, where most houses were destroyed.

Communications have been down everywhere, making assessments more difficult, it said.

"There has been no contact from the Ha'apai Group of islands, and we are particularly concerned about two small low-lying islands — Mango and Fonoi — following surveillance flights confirming substantial property damage," UN spokesman Stephane Dujarric said. 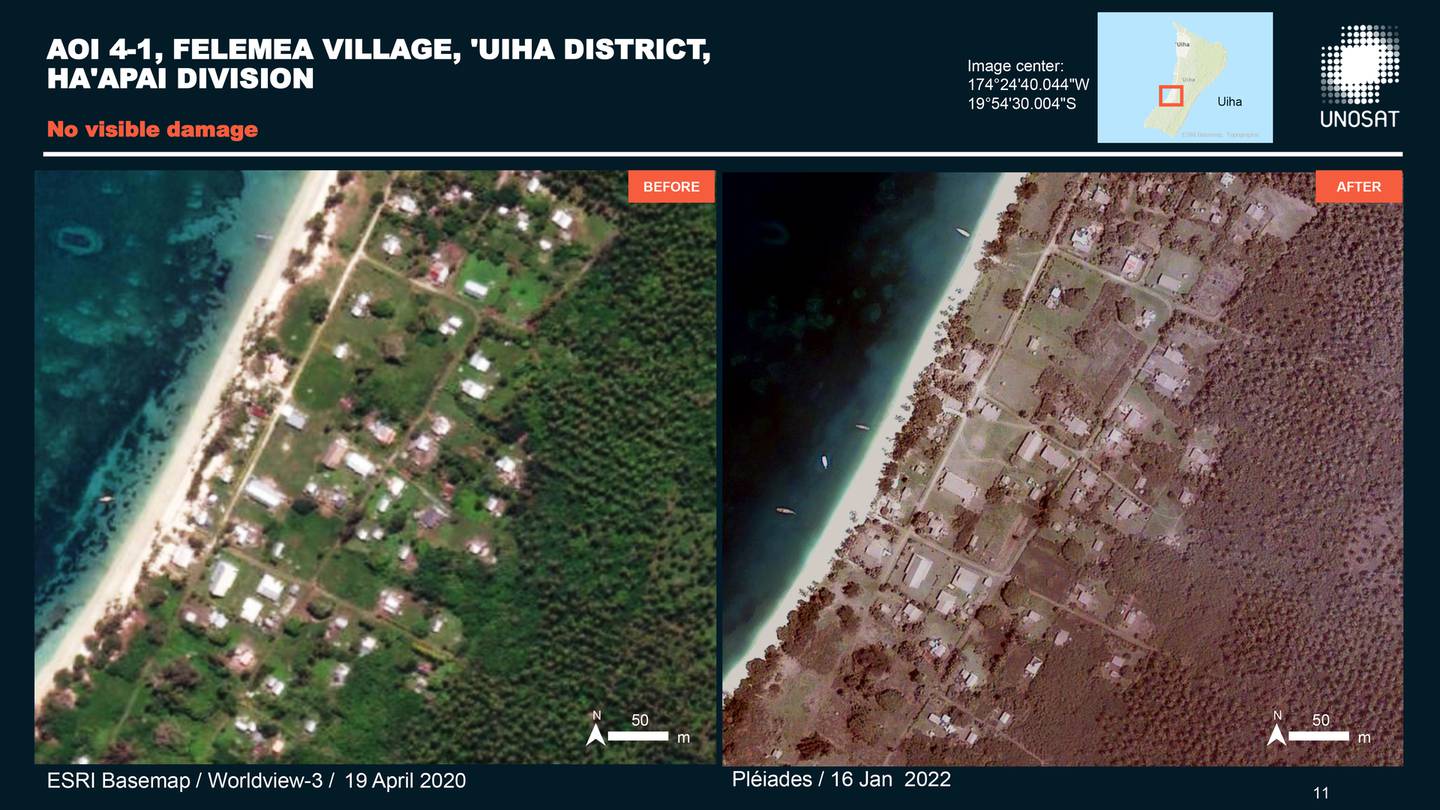 Before and after scenes of the Tonga volcano eruption recorded by satellite of Felemea Village, 'Uiha District, Ha'Apai. Photo / AP

New Zealand's High Commission in Tonga also reported significant damage along the western coast of Tongatapu, including to resorts and the waterfront area.

The blast from the volcano could be heard in Alaska, and the waves crossed the ocean to cause an oil spill and two drownings in Peru. The startling satellite images resembled a massive nuclear explosion.

Tonga's main island of Tongatapu, perhaps the biggest problem is the ash that has transformed it into a gray moonscape, contaminating the rainwater that people rely on to drink. New Zealand's military is sending fresh water and other much-needed supplies, but said Tuesday the ash covering Tonga's main runway will delay the flight at least another day.

On Tongatapu, life is slowly returning to normal. The tsunami that swept over coastal areas after the eruption was frightening for many but rose only about 80cm, allowing most to escape.

"We did hold grave fears, given the magnitude of what we saw in that unprecedented blast," said Katie Greenwood, the head of delegation in the Pacific for the International Federation of Red Cross and Red Crescent Societies. "Fortunately, in those major population centers we are not seeing the catastrophic effect we thought might happen, and that's very good news."

As we wait to hear more news from Tonga we know that @TongaRedCross was well prepared for the #disasters like the #tsunami. They have prepositioned supplies for 1200 households and we ran disaster simulation in Sept. More at 1h20 here: https://t.co/13c97el1u5 @dfat pic.twitter.com/L6hVlzSUIp

Greenwood, who is based in Fiji and has been talking with people in Tonga by satellite phone, said an estimated 50 homes were destroyed on Tongatapu but that nobody needed to use emergency shelters. She said about 90 people on the nearby island of 'Eua were using shelters.

Like other island nations in the Pacific, Tonga is regularly exposed to the extremes of nature, whether it be cyclones or earthquakes, making people more resilient to the challenges they bring. 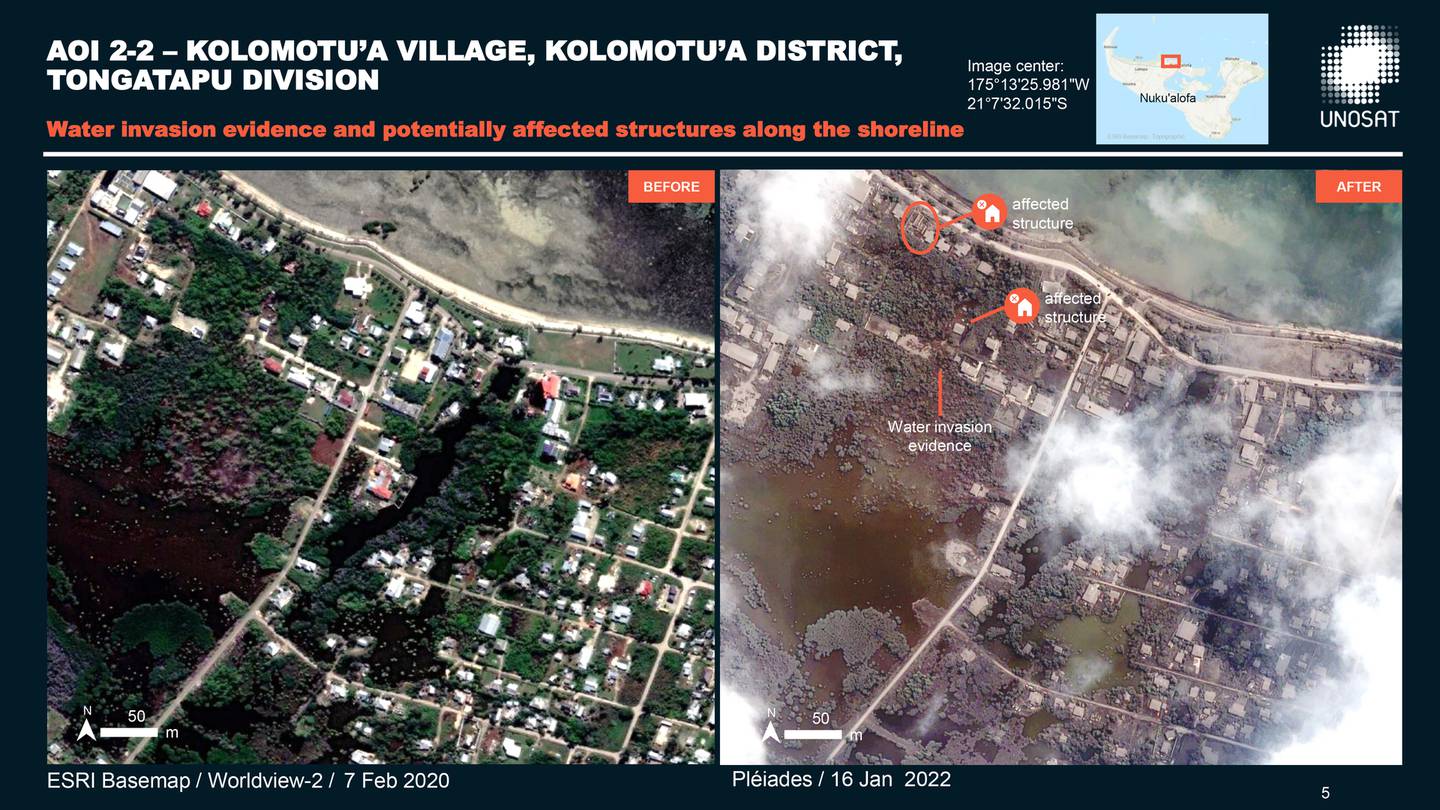 Indeed, Greenwood said Tonga does not want an influx of aid workers following the eruption. Tonga is one of the few remaining places in the world that has managed to avoid any outbreaks of the coronavirus, and officials fear that if outsiders bring in the virus it could create a much bigger disaster than the one they're already facing.

Another worry, said Greenwood, is that the volcano could erupt again. She said there is currently no working equipment around it which could help predict such an event.

Satellite images captured the spectacular eruption of the Hunga Tonga Hunga Ha'apai volcano on Saturday, with a plume of ash, steam and gas rising like a giant mushroom above the South Pacific. The volcano is located about 64km north of Tonga's capital, Nuku'alofa.

Two people drowned in Peru, which also reported the oil spill after waves moved a ship that was transferring oil at a refinery.

In Tonga, British woman Angela Glover, 50, was one of those who died after being swept away by a wave, her family said.

Nick Eleini said his sister's body had been found and that her husband survived. "I understand that this terrible accident came about as they tried to rescue their dogs," Eleini told Sky News. He said it had been his sister's life dream to live in the South Pacific and "she loved her life there." 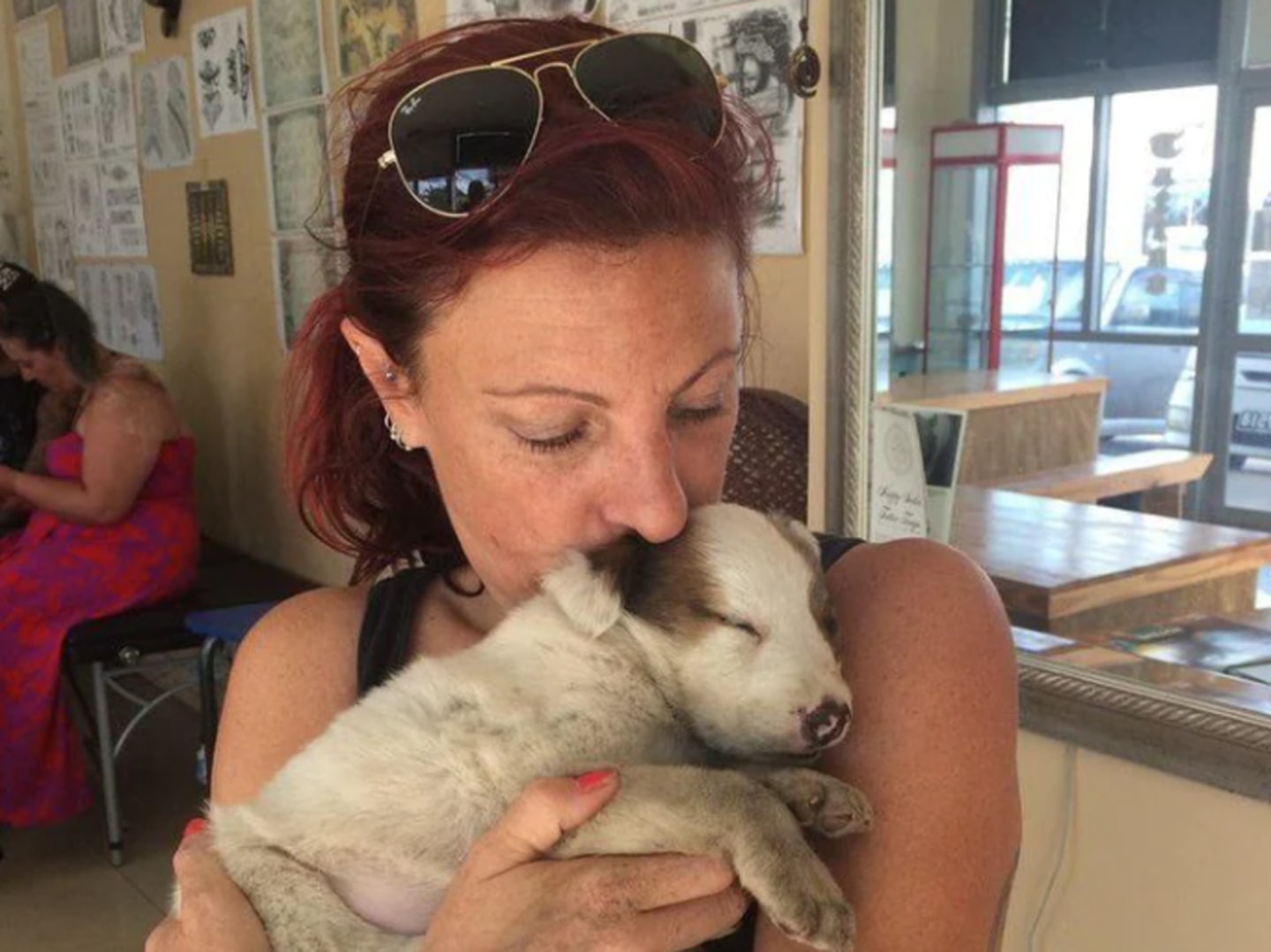 New Zealand's military said it hoped the airfield in Tonga would be opened either Wednesday or Thursday. The military said it had considered an airdrop but that was "not the preference of the Tongan authorities."

New Zealand also sent a navy ship to Tonga on Tuesday, with another planned to leave later in the day, and pledged an initial 1 million New Zealand dollars ($680,000) toward recovery efforts.

Australia sent a navy ship from Sydney to Brisbane to prepare for a support mission if needed.

The UN World Food Program is exploring how to bring in relief supplies and more staff and has received a request to restore communication lines in Tonga, which is home to about 105,000 people, Dujarric said.

Communications with the island nation are limited because the single underwater fiber-optic cable that connects Tonga to the rest of the world was likely severed in the eruption. The company that owns the cable said the repairs could take weeks. 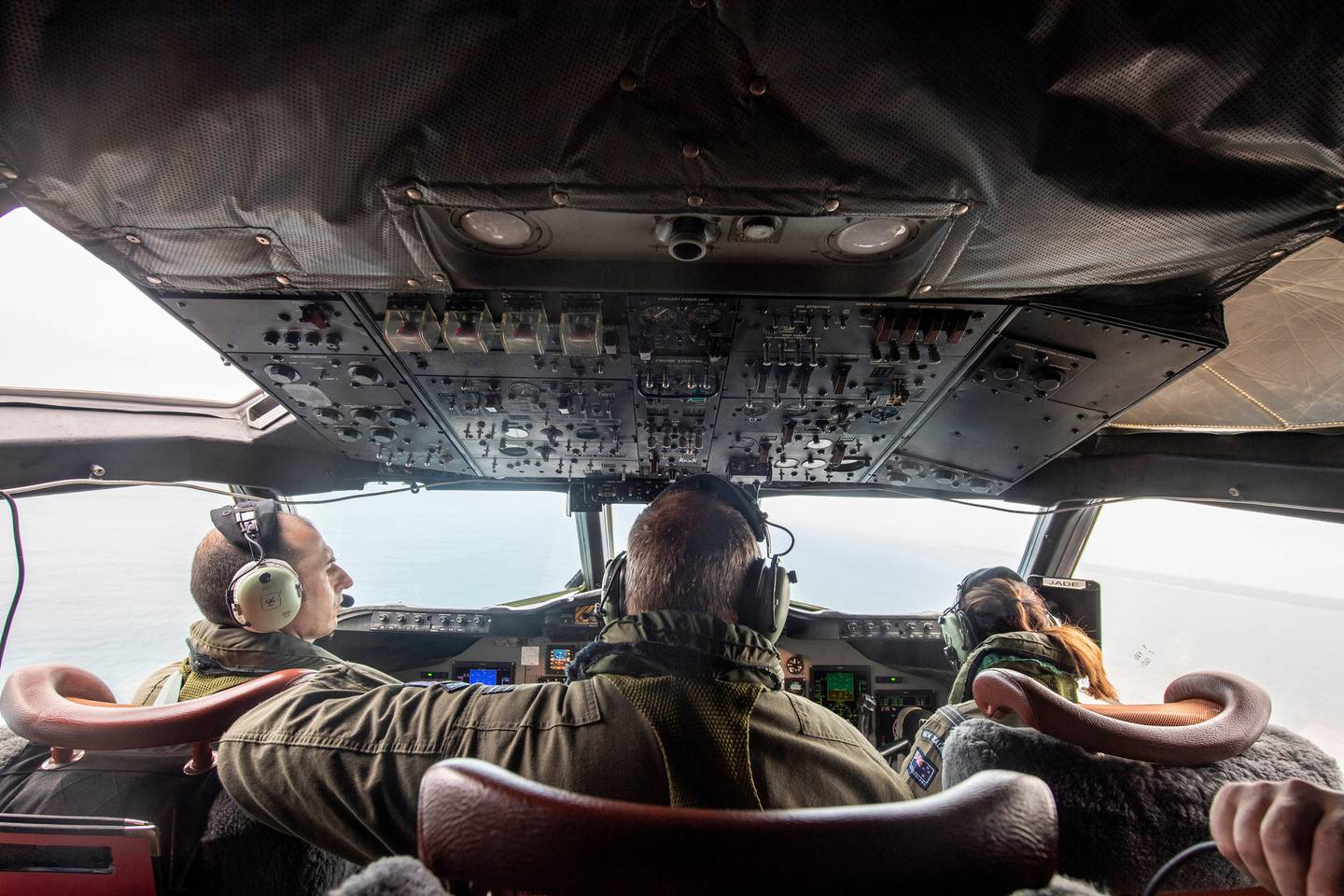 Crew from an Orion aircraft look out the window as it flies over an area of Tonga that has heavy ash fall from the volcanic eruption. Photo / NZ Defence Force

Samiuela Fonua, who chairs the board at Tonga Cable Ltd., said the cable appeared to have been severed soon after the eruption. He said the cable lies atop and within coral reef, which can be sharp.

Fonua said a ship would need to pull up the cable to assess the damage and then crews would need to fix it. A single break might take a week to repair, he said, while multiple breaks could take up to three weeks. He added that it was unclear when it would be safe for a ship to venture near the undersea volcano to undertake the work.

A second undersea cable that connects the islands within Tonga also appeared to have been severed, Fonua said. However, a local phone network was working, allowing Tongans to call each other. But he said the lingering ash cloud was continuing to make even satellite phone calls abroad difficult.