A Belarusian Olympic sprinter who feared reprisals back home after publicly criticising her coaches at the Tokyo Games used quick thinking to get help, using her phone to translate a plea and show it to Japanese police as she tried to avoid being forced onto a plane.

Krystsina Tsimanouskaya described on Thursday a dramatic series of events at the Olympics that led her to decide not to return to Belarus, where an authoritarian government has relentlessly pursued its critics. She fled instead to Poland, arriving on Wednesday.

After posting a message on social media that criticised the way her team was being managed, Tsimanouskaya said she was told to pack her bags. Team officials told her to say she was injured and had to go home early.

On her way to the airport, she spoke briefly to her grandmother, who explained that there was a massive backlash against her in the media in Belarus, including reports that she was mentally ill. 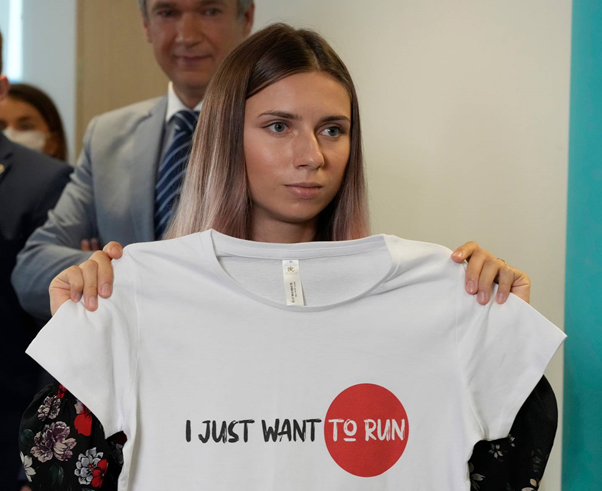 Krystsina Tsimanouskaya: "I want to tell all Belarusians not to be afraid and, if they're under pressure, speak out." Photo / AP

Her grandmother, she said, advised her not to return. Her parents suggested she could go to Poland.

At the airport, she sought help from police, using Google translate to convey her plea in Japanese. At first, they didn't understand, and a Belarusian official asked what was going on. She claimed she forgot something at the Olympic village and needed to return. Police eventually took her away from the Belarusian officials.

As the drama unfolded, European countries offered to help her, and the runner ended up at the Polish embassy, where she received a humanitarian visa.

Many of Belarus' activists have fled to Poland to avoid a brutal crackdown on dissent by President Alexander Lukashenko's government.

The European Union's foreign policy chief, Josep Borrell, tweeted to say he was "Reassured to see that the athlete Krystsina #Tsimanouskaya arrived safe in Poland." He deplored, however, that "One more proud Belarusian has however been forced to flee her own country due to the actions of the Lukashenko regime and Olympic truce been violated."

At a news conference in Warsaw on Thursday, Tsimanouskaya thanked the people who supported her during the standoff.

"It was the whole world, and these people make me much stronger," she said. She added that she feels safe now.

She also had a message for her fellow Belarusians.

"I want to tell all Belarusians not to be afraid and, if they're under pressure, speak out," said the runner, who spoke in both English and Russian at the news conference.

Still, she expressed concern for the safety of her family back home. Her husband, Arseni Zdanevich, fled Belarus this week shortly after his wife said she would not be returning. Poland has also granted him a visa.

"When I arrived at the airport, I used the Google translator to translate in Japanese that I need help. I came to police and showed the translation."

Belarus sprinter Krystsina Tsimanouskaya said she used quick thinking to avoid being forced onto a plane in Tokyo pic.twitter.com/B78WvAcrcm

When the country was rocked by months of protests following an election that handed Lukashenko a sixth term but that the opposition and the West saw as rigged, authorities responded with a sweeping crackdown. Some 35,000 people were arrested and thousands of demonstrators beaten. The government has also targeted independent media and opposition figures.

In a sign of the lengths authorities are willing to go to silence their critics, Belarus officials diverted a passenger jet to the capital of Minsk in May and arrested a dissident journalist who was on board.

While Tsimanouskaya's criticism was aimed at team officials, her defiance may not sit well with political authorities.

Lukashenko, who led the Belarus National Olympic Committee for almost a quarter-century before handing over the job to his son in February, has a keen interest in sports, seeing it as a key element of national prestige. At a press conference on Thursday, Krystsina Tsimanouskaya described a dramatic series of events at the Olympics that led her to decide not to return to Belarus. Photo / AP

But Tsimanouskaya has insisted that she is no political activist, never intended to flee Belarus and only wanted to be allowed to run in her preferred event at the Olympics. The standoff began after she complained that she was scheduled to participate in a race she had never competed in.

Tsimanouskaya has called for an investigation into what happened, and the International Olympic Committee said it opened a disciplinary case "to establish the facts" in her case.

The main opposition challenger to Lukashenko in last August's disputed election said Tsimanouskaya's case showed the lengths his government would go to.

"The message now is that even if you are not involved into opposition movement, even if you have never participated in any demonstrations, but you show your disloyalty to the regime because you do not agree with actions, you are under attack," Sviatlana Tsikhanouskaya told The Associated Press in an interview.

The 24-year-old runner said she hadn't thought about seeking political asylum and hoped to return home one day, when it is safe. She also said she wanted to figure out soon how she might continue her career. She said she will speak with Polish officials on Friday about her next steps.

"I just wanted to run at the Olympics, it was my dream," she said. "I still hope that these were not the last Olympics in my life."