The Uyghur inmates sat in uniform rows with their legs crossed in lotus position and their backs ramrod straight, numbered and tagged, gazing at a television playing grainy black-and-white images of Chinese Communist Party history.

This is one of an estimated 240 cells in just one section of Urumqi No. 3 Detention Centre in Dabancheng, seen by Associated Press journalists granted extraordinary access during a state-led tour to China's far west Xinjiang region.

The detention centre is the largest in the country and possibly the world, with a complex that sprawls over 220 acres — making it twice as large as Vatican City. A sign at the front identified it as a "kanshousuo", a pre-trial detention facility.

Chinese officials declined to say how many inmates were there, saying the number varied. But the AP estimated the centre could hold roughly 10,000 people and many more if crowded, based on satellite imagery and the cells and benches seen during the tour. Urumqi No. 3 Detention Centre in western China's Xinjiang Uyghur Autonomous Region is the largest in the country and possibly the world, covering 220 acres. (Photo / AP)

While the BBC and Reuters have in the past reported from the outside, the AP was the first Western media organisation allowed in.

This site suggests that China still holds and plans to hold vast numbers of Uyghurs and other mostly Muslim minorities in detention. Satellite imagery shows that new buildings stretching almost a mile long were added to the Dabancheng detention facility in 2019.

China has described its sweeping lockup of a million or more minorities over the past four years as a "war against terror", after a series of knifings and bombings by a small number of extremist Uyghurs native to Xinjiang. Among its most controversial aspects were the so-called vocational "training centres" – described by former detainees as brutal internment camps surrounded by barbed wire and armed guards.

China at first denied their existence, and then, under heavy international criticism, said in 2019 that all the occupants had "graduated".

But the AP's visit to Dabancheng, satellite imagery and interviews with experts and former detainees suggest that while many "training centres" were indeed closed, some like this one were simply converted into prisons or pre-trial detention facilities. Many new facilities have also been built, including a new 85-acre detention center down the road from No. 3 in Dabancheng that went up over 2019, satellite imagery shows.

The changes seem to be an attempt to move from the makeshift and extrajudicial "training centres" into a more permanent system of prisons and pre-trial detention facilities justified under the law. While some Uyghurs have been released, others have simply been moved into this prison network. 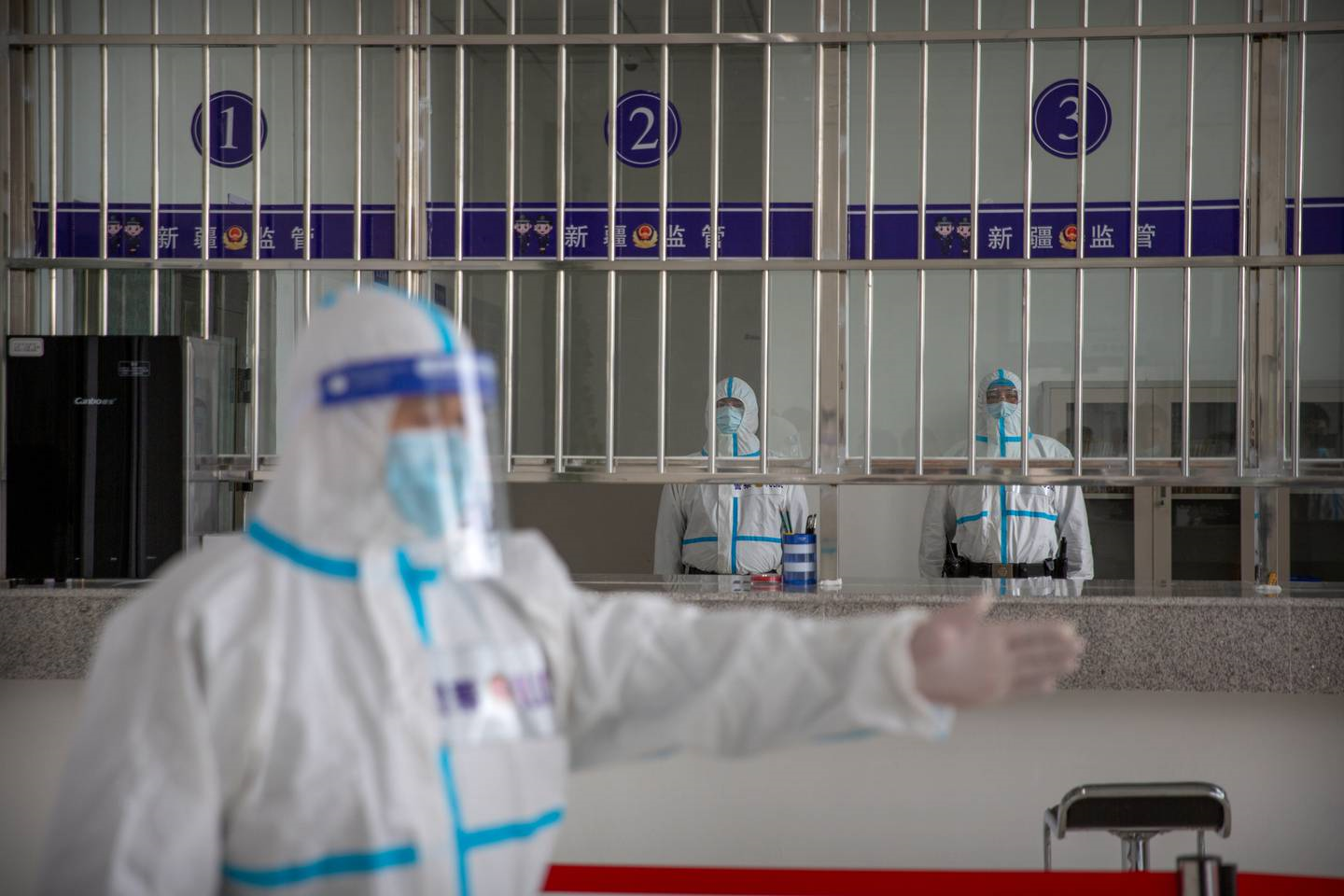 Security officers in PPE at a reception area in the visitors' hall at the Urumqi No. 3 Detention Center in Dabancheng. (Photo / AP)

However, researchers say many innocent people were often thrown in detention for things like going abroad or attending religious gatherings. Darren Byler, an anthropologist studying the Uyghurs at the University of Colorado, noted that many prisoners have not committed "real crimes by any standards", and that they go through a "show" trial without due process.

"We're moving from a police state to a mass incarceration state. Hundreds of thousands of people have disappeared from the population," Byler said. "It's the criminalisation of normal behaviour."

During the April tour of No. 3 in Dabancheng, officials repeatedly distanced it from the "training centres" that Beijing claims to have closed.

"There was no connection between our detention centre and the training centres," insisted Urumqi Public Security Bureau director Zhao Zhongwei. "There's never been one around here."

They also said the No. 3 centre was proof of China's commitment to rehabilitation and the rule of law, with inmates provided hot meals, exercise, access to legal counsel and televised classes lecturing them on their crimes. Rights are protected, officials say, and only lawbreakers need worry about detention.

"See, the BBC report said this was a re-education camp. It's not - it's a detention centre," said Liu Chang, an official with the foreign ministry.

However, despite the claims of officials, the evidence shows No. 3 was indeed an internment camp. A Reuters picture of the entrance in September 2018 shows that the facility used to be called the "Urumqi Vocational Skills Education and Training Centre".

Publicly available documents collected by Shawn Zhang, a law student in Canada, confirm that a centre by the same name was commissioned to be built at the same location in 2017.

Records also show that Chinese conglomerate Hengfeng Information Technology won an US$11 million contract for outfitting the Urumqi "training centre". A man who answered a number for Hengfeng confirmed the company had taken part in the construction of the "training centre", but Hengfeng did not respond to further requests for comment. China has described its sweeping lockup of a million or more minorities over the past four years as a "war against terror". (Photo / AP)

A former construction contractor who visited the Dabancheng facility in 2018 told the AP that it was the same as the "Urumqi Vocational Skills Education and Training Centre", and had been converted to a detention facility in 2019, with the nameplate switched. He declined to be named for fear of retaliation against his family.

"All the former students inside became prisoners," he said.

In one corner of the compound, masked inmates sat in rigid formation. Most appeared to be Uyghur. Zhu Hongbin, the center's director, rapped on one of the cell's windows.

"They're totally unbreakable," he said, his voice muffled beneath head-to-toe medical gear.

At the control room, staff gazed at a wall-to-wall, God's-eye display of some two dozen screens streaming footage from each cell. Another panel played programming from state broadcaster CCTV, which Zhu said was being shown to the inmates.

"We control what they watch," Zhu said. "We can see if they're breaking regulations, or if they might hurt or kill themselves."

The centre also screens video classes, Zhu said, to teach them about their crimes. 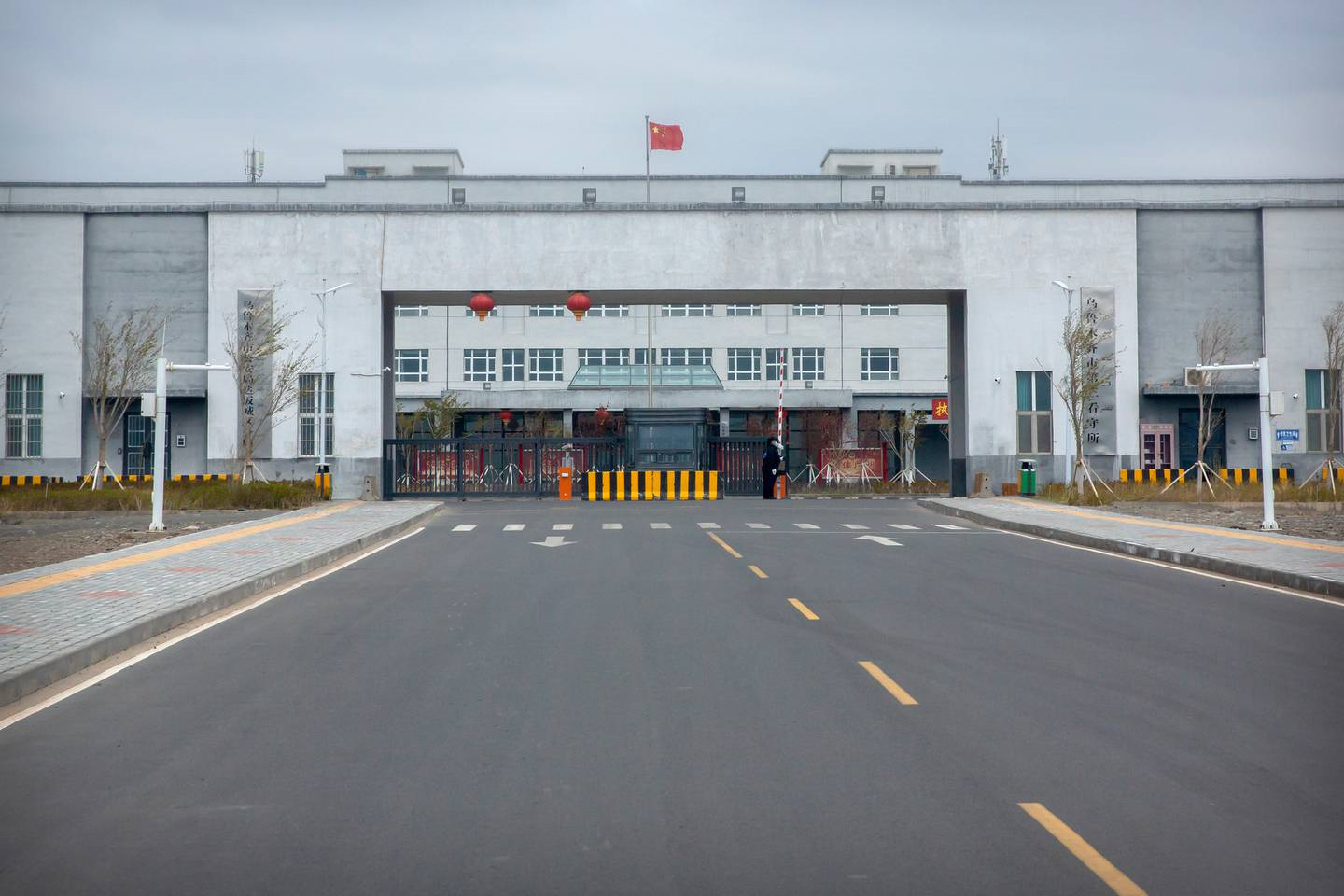 China at first denied the detention centres' existence, and then, under heavy international criticism, said in 2019 that all the occupants had "graduated". (Photo / AP)

Twenty-two rooms with chairs and computers allow inmates to chat with lawyers, relatives, and police via video, as they are strapped to their seats. Down the corridor, an office houses a branch of the Urumqi prosecutor's office, in another sign of the switch to a formal prison system.

A nearby medical room contains a gurney, a tank of oxygen and a cabinet stocked with medicine. Guidelines hanging on the wall instruct staff on the proper protocol to deal with sick inmates – and also to force-feed inmates on hunger strikes by inserting tubes up their noses.

Zhao, the other official, said inmates are held for 15 days to a year before trial depending on their suspected crime, and the legal process is the same as in the rest of China. He said the centre was built to house inmates away from the city because of safety concerns.

Urumqi No. 3 Detention Centre is comparable in size to Rikers Island in New York City, but the region serves less than four million people compared to nearly 20 million for Rikers. At least three other detention centres are sprinkled across Urumqi, along with ten or more prisons.

The No. 3 centre did not appear to be at full capacity; one section was closed, officials said, and six to 10 inmates sat in each cell, taking up only half the benches.

But the latest official government statistics available, for 2019, show that there were about twice as many arrests in Xinjiang that year than before the crackdown started in 2017. Hundreds of thousands have been sentenced to prison, many to terms of five years or more.

"Of course, during this process, the number of people sentenced in accordance with the law will increase. This is a concrete indication of our work efficiency," Xu said. "By taking these measures, terrorists are more likely to be brought to justice."

But many relatives of those imprisoned say they were sentenced on spurious charges, and experts caution that the opacity of the Xinjiang legal system is a red flag.

Researcher Gene Bunin found that Uyghurs were made to sign confessions for what the authorities called "terrorist activities". Some were subsequently released, including one detained in the Dabancheng facility, a relative told The Associated Press, declining to be named to avoid retribution against the former detainee.

Others were not. Police reports obtained by the Intercept detail the case of eight Uyghurs in one Urumqi neighbourhood detained in the "Dabancheng" facility in 2017 for reading religious texts, installing filesharing applications, or simply being an "untrustworthy person". In late 2018, the reports show, prosecutors summoned them to makeshift meetings and sentenced them to two to five years of "study".

AP journalists did not witness any signs of torture or beating at the facility, and were unable to speak directly to any former or current detainees.

But a Uyghur who had fled Xinjiang, Zumret Dawut, said a now-deceased friend who worked at Dabancheng had witnessed treatment so brutal that she fainted. The friend, Paride Amati, said she had seen a pair of teens forced to sign confessions claiming they were involved in terrorism while studying in Egypt, and their skin had been beaten bloody and raw.

A teacher at the Dabancheng facility also called it "worse than hell", according to a colleague at a different camp, Qelbinur Sedik. The teacher said that during classes she could hear the sounds of people being tortured with electric batons and iron chairs, according to Sedik.

Accounts of conditions in detention centres elsewhere in Xinjiang vary widely: some describe restrictive conditions but no physical abuse, while others say they were tortured. Such accounts are difficult to verify independently, and the Xinjiang authorities deny all allegations of abuse.

Chinese officials also continue to deny that they are holding Uyghurs on false charges. Down the road from the No. 3 centre, high walls and guard towers were visible in the same location as the new detention facility shown in satellite imagery.

When asked what it was, officials pleaded ignorance.