Two Nasa astronauts are heading into orbit after the launch this morning (NZ time) of the SpaceX rocket ship designed and built by Elon Musk's company.

The liftoff happened on time.

"The ride was incredible," one of the astronauts told mission control of the liftoff.

So far, everything has gone smoothly.

The first booster of the Falcon 9 rocket successfully detached. It autonomously guided itself and landed on a barge in the Atlantic Ocean.

SpaceX tweeted that Crew Dragon - in which the astronauts travel - had separated from Falcon 9's second stage and they were now on their way to the International Space Station.

It will take about 24 hours to get there.

Stormy weather had threatened another postponement most of the day, but the Cape Canaveral outlook improved markedly in the afternoon, just before the scheduled 3.22pm (local time) liftoff of the 260-foot Falcon 9 in the first launch of astronauts into orbit by a private company.

It is also Nasa's first human spaceflight launched from US soil in nearly a decade.

The mission unfolded amid the gloom of the coronavirus outbreak, which has killed more than 100,000 Americans, and racial unrest across the US over the death of George Floyd, a handcuffed black man, at the hands of Minneapolis police. President Donald Trump, right, pumps his fist as he arrives with Vice President Mike Pence and Karen Pence to view the SpaceX flight to the International Space Station. (Photo / AP)

Nasa officials and others held out hope the flight would lift American spirits.

"Maybe there's an opportunity here for America to maybe pause and look up and see a bright, shining moment of hope at what the future looks like, that the United States of America can do extraordinary things even in difficult times," Nasa administrator Jim Bridenstine said.

Veteran astronauts Doug Hurley and Bob Behnken pulled on their angular, white-and-black spacesuits with help from technicians wearing masks, gloves and black hoods that made them look like ninjas. 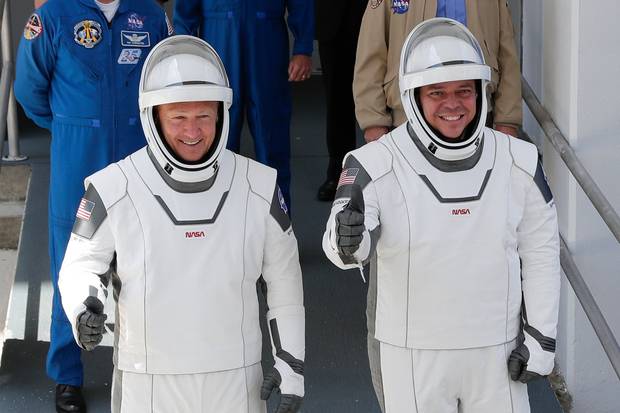 Nasa astronauts Douglas Hurley, left, and Robert Behnken on their way to Pad 39-A, at the Kennedy Space Centre in Cape Canaveral. (Photo / AP)

Before setting out for the launch pad in a gull-wing Tesla SUV — another Musk product — Behnken pantomimed a hug of his 6-year-old son, Theo, and said: "Are you going to listen to Mommy and make her life easy?" Hurley blew kisses to his 10-year-old son and wife.

Wednesday's countdown of the rocket and its bullet-shaped Dragon capsule was halted at just under 17 minutes because of the threat of lightning. 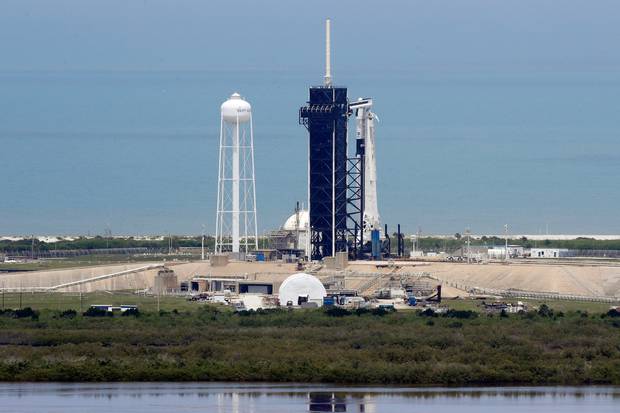 A SpaceX Falcon 9, with Nasa astronauts Doug Hurley and Bob Behnken in the Dragon crew capsule, prepare to lift off from Pad 39-A at the Kennedy Space Centre in Cape Canaveral. (Photo / AP)

Ever since the space shuttle was retired in 2011, Nasa has relied on Russian spaceships launched from Kazakhstan to take US astronauts to and from the space station.

"I would be lying to you if I told you I wasn't nervous," Bridenstine said before the launch attempt.

"We want to do everything we can to minimise the risk, minimise the uncertainty, so that Bob and Doug will be safe."

Because of the coronavirus, Nasa severely limited the number of employees, visitors and journalists allowed deep inside Kennedy Space Centre, and the crowd was relatively small, at a few thousand.

At the centre's tourist complex, though, all 4000 tickets were snapped up in a few hours.

Among the spectators was Neil Wight, a machinist from Buffalo, New York, who staked out a view of the launch pad from a park in Titusville. "It's pretty historically significant in my book and a lot of other people's books. With everything that's going on in this country right now, it's important that we do things extraordinary in life," Wight said. "We've been bombarded with doom and gloom for the last six, eight weeks, whatever it is, and this is awesome. It brings a lot of people together."

Nasa hired SpaceX and Boeing in 2014 to taxi astronauts to and from the space station, under contracts totaling US$7 billion. Both companies launched their crew capsules last year with test dummies. SpaceX's Dragon aced all of its objectives, while Boeing's Starliner capsule ended up in the wrong orbit and was almost destroyed because of software errors.

As a result, the first Starliner flight carrying astronauts isn't expected until next year.