Thailand made it legal to cultivate and possess marijuana as of Thursday, like a dream come true for an ageing generation of pot smokers who recall the kick delivered by the legendary Thai Stick variety.

The public health minister's plan to distribute 1 million marijuana seedlings, beginning Friday, has added to the impression that Thailand is turning into a weed wonderland.

The decision by the Food and Drug Administration to remove all of the plant from the category of narcotic drugs makes Thailand the first nation in Asia to decriminalise marijuana for medical and industrial use. But it is not following the examples of Uruguay and Canada, the only two countries so far that have legalised recreational marijuana on a national basis.

So far, it appears there will be no effort to police what people can grow and smoke at home, aside from registering to do so and declaring it is for medical purposes.

Some Thai advocates celebrated on Thursday by buying marijuana at a cafe that had previously been limited to selling products made from the parts of the plant that do not get people high. The dozen or so people who turned up early at the Highland Cafe were able to choose from a variety of buds with names such as Sugarcane, Bubblegum, Purple Afghani and UFO.

Staff of the Highland Cafe select portions of marijuana for a customer in Bangkok, Thailand. Photo / AP

"I can say it out loud, that I am a cannabis smoker. I don't need to hide like in the past when it was branded as a illegal drug," said 24-year-old Rittipong Bachkul, the day's first customer.

Marijuana is also known as cannabis or ganja in Thailand.

"As far as the government is concerned, it's their job to promote medical use only. But it is pretty clear that we have come very far and finally are legalising its use. The government understands that it's more pros than cons," said Rattapon Sanrak, the cafe's co-owner and a longtime legalisation activist.

The country is known for its Thai Stick variety, which is named after the way its potent flowers are dried and tied into sticks and is the origin of many strains now grown overseas.

Thailand's government has warned that those eager to light up for fun that smoking in public could still be considered a nuisance, subject to a potential three-month jail sentence and 25,000 baht (NZ$1130) fine. And marijuana extracts, such as oil, remain illegal if they contain more than 0.2 per cent of tetrahydrocannabinol, or THC, the chemical that makes people high.

Tourists should proceed cautiously until the rules become clearer after a new cannabis law is passed, said Professor Sarana Sommano of Chiang Mai University's Department of Plant and Soil Sciences.

"There are still risks. The problem is that cannabis is no longer considered a narcotic but there are no ministry regulations and rules governing the use of it," she said.

"There is no mention of limits on use, drug-impaired driving laws. This could be a mistake by the government in trying to rush out its policy to please voters without really planning the details and explaining to the public what's going on." A worker tends to cannabis plants at a farm in Chonburi province, eastern Thailand. Photo / AP

Thailand mainly wants to make a splash in the market for medical marijuana. It already has a well-developed medical tourism industry and its tropical climate is ideal for growing cannabis.

"We should know how to use cannabis," Public Health Minister Anutin Charnvirakul, a marijuana booster, said recently.

"If we have the right awareness, cannabis is like gold, something valuable, and should be promoted."

Some immediate beneficiaries of the change are people who have been locked up for breaking the old law.

"From our perspective, a major positive outcome of the legal changes is that at least 4000 people imprisoned for offences relating to cannabis will be released," Gloria Lai, Asia regional director of the International Drug Policy Consortium, said in an email interview.

Her organisation is a network of civic groups worldwide advocating drug policies that incorporate human rights, health and development.

Predicted economic benefits are at the heart of Thailand's marijuana reforms, projected to boost everything from national income to small farmers' livelihoods. But there is concern whether the benefits will be distributed equitably. 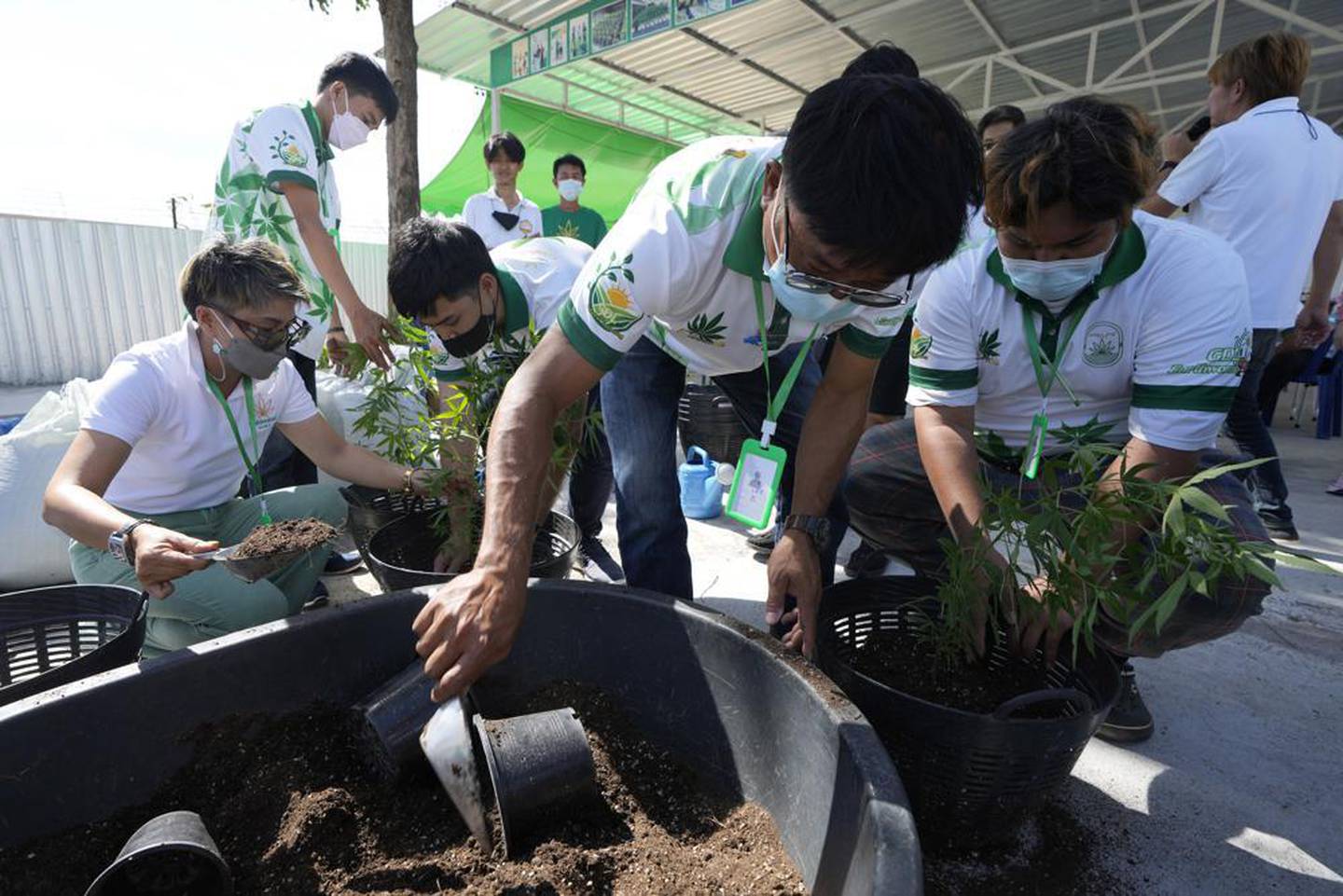 One fear is that large corporations could unfairly benefit from proposed regulations involving complicated licensing processes and expensive fees for commercial use that would handicap small producers.

Taopiphop Limjittrakorn, a lawmaker in the opposition Move Forward party, said that under some proposed regulations, the cannabis industry could end up being controlled by a few big companies, as is the case with alcoholic beverages. His party wants the laws now being drafted to tackle the problem.

Small operators are eager to move into the marijuana business.

On a recent hot Sunday afternoon in eastern Thailand's Sri Racha district, Ittisug Hanjichan, owner of the Goldenleaf Hemp cannabis farm, led his fifth training course for 40 entrepreneurs, farmers, and retirees. They paid about NZ$235 each to learn tips on nicking seed coats and tending the plants to get quality yields.

One of the attendees was 18-year-old Chanadech Sonboon, who said his parents used to scold him for trying to secretly grow marijuana plants.

He said his father has changed his mind and now sees marijuana as a medication rather than something to be abused. The family runs a small homestay and cafe and hopes to one day provide cannabis to its guests.