Nearly 20 Texas police officers stood for about 45 minutes in the hallway outside the adjoining school classrooms where the gunman killed students and teachers this week before US Border Patrol agents unlocked the door to confront and kill him, authorities said Friday (Saturday NZT).

At least some of the 911 calls made during the Tuesday attack on Robb Elementary School in Uvalde came from inside one of the connected classrooms where 18-year-old Salvador Ramos was holed up, Steven McCraw, the head of the Texas Department of Public Safety, said during a contentious news conference.

The commander at the scene believed Ramos was barricaded inside and that the children were not at risk, McCraw said.

"It was the wrong decision," he said. McCraw released new details about the attack in which Ramos killed 19 children, though his motive remains unclear.

The Border Patrol agents eventually used a master key to open the locked door of the classroom where they confronted and killed Ramos, he said.

There was a barrage of gunfire shortly after Ramos entered the classroom where officers eventually killed him, but the shots were "sporadic" for much of the 48 minutes when officers waited in the hallway, McCraw said. He said investigators do not know if or how many children died during that time.

Throughout the attack, teachers and children repeatedly called 911 asking for help, including a girl who pleaded: "Please send the police now," McCraw said. Questions have mounted over the amount of time it took officers to enter the school to confront the gunman.

It was 11:28am Tuesday when Ramos' Ford pickup slammed into a ditch behind the low-slung Texas school and the driver jumped out carrying an AR-15-style rifle.

Twelve minutes after that, authorities say, Ramos entered the school and found his way to the fourth-grade classroom where he killed the 21 victims.

But it wasn't until 12:58pm that law enforcement radio chatter said Ramos had been killed and the siege was over.

What happened in those 90 minutes, in a working-class neighbourhood near the edge of the town of Uvalde, has fuelled mounting public anger and scrutiny over law enforcement's response to Tuesday's rampage.

"They say they rushed in," said Javier Cazares, whose fourth-grade daughter, Jacklyn Cazares, was killed in the attack, and who raced to the school as the massacre unfolded. "We didn't see that." 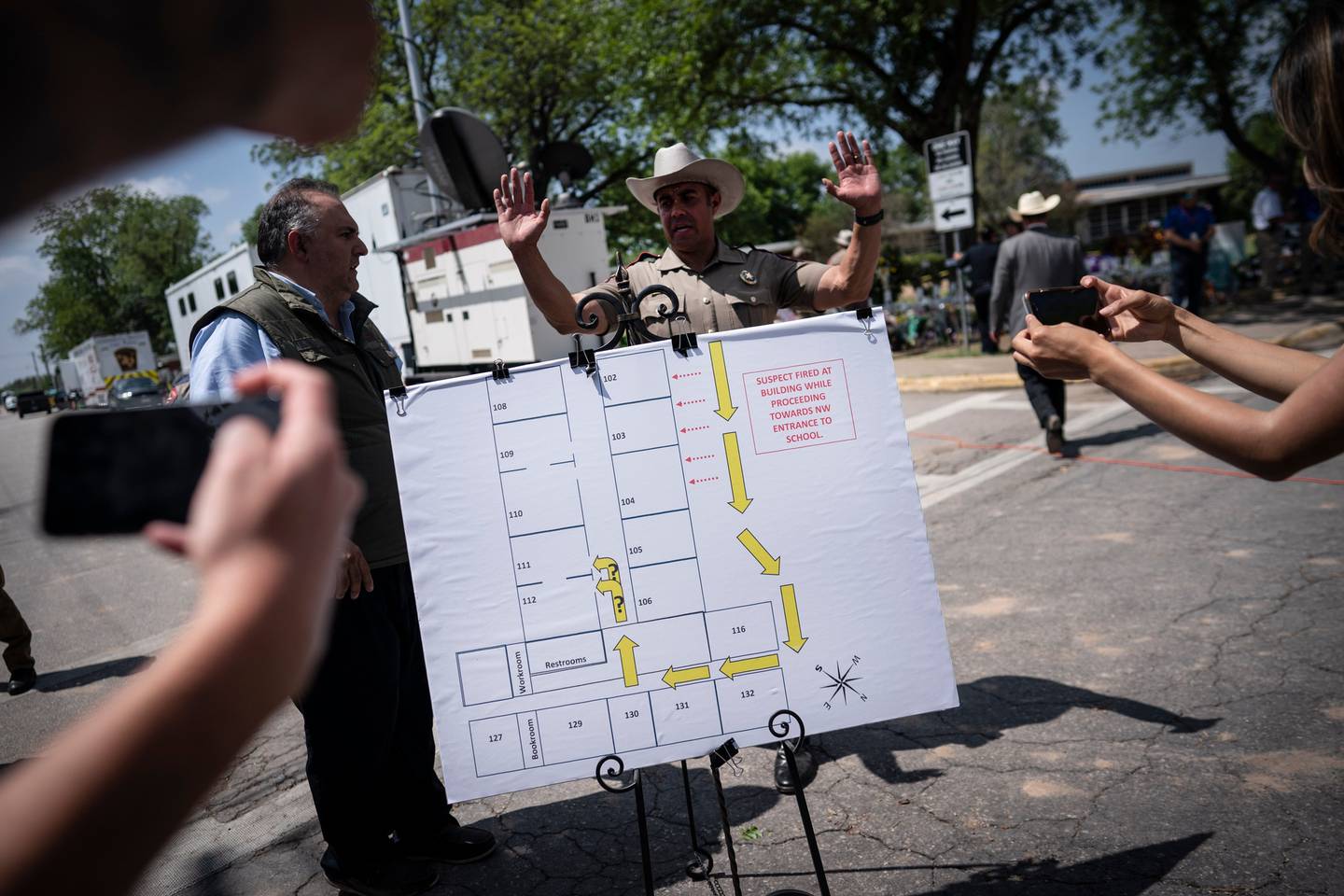 A map of the school is displayed at a press conference held outside Robb Elementary School. Photo / AP

According to the new timeline provided by McCraw, After crashing his truck, Ramos fired on two people coming out of a nearby funeral home, officials said.

Contrary to earlier statements by officials, a school district police officer was not inside the school when Ramos arrived. When that officer did respond, he unknowingly drove past Ramos, who was crouched behind a car parked outside and firing at the building, McCraw said.

At 11:33pm, Ramos entered the school through a rear door that had been propped open and fired more than 100 rounds into a pair of classrooms, McCraw said.

Two minutes later, three local police officers arrived and entered the building through the same door, followed soon after by four others, McCraw said. Within 15 minutes, as many as 19 officers from different agencies had assembled in the hallway, taking sporadic fire from Ramos, who was holed up in a classroom.

Ramos was still inside at 12:10pm when the first US Marshals Service deputies arrived. They had raced to the school from about 113 kilometers away in the border town of Del Rio, the agency said in a tweet Friday.

But the police commander inside the building decided the group should wait to confront the gunman, on the belief that the scene was no longer an active attack, McCraw said.

The crisis came to an end after a group of Border Patrol tactical officers entered the school at 12:45pm, said Texas Department of Public Safety spokesperson Travis Considine. They engaged in a shootout with the gunman, who was holed up in the fourth-grade classroom. Moments before 1pm, he was dead. 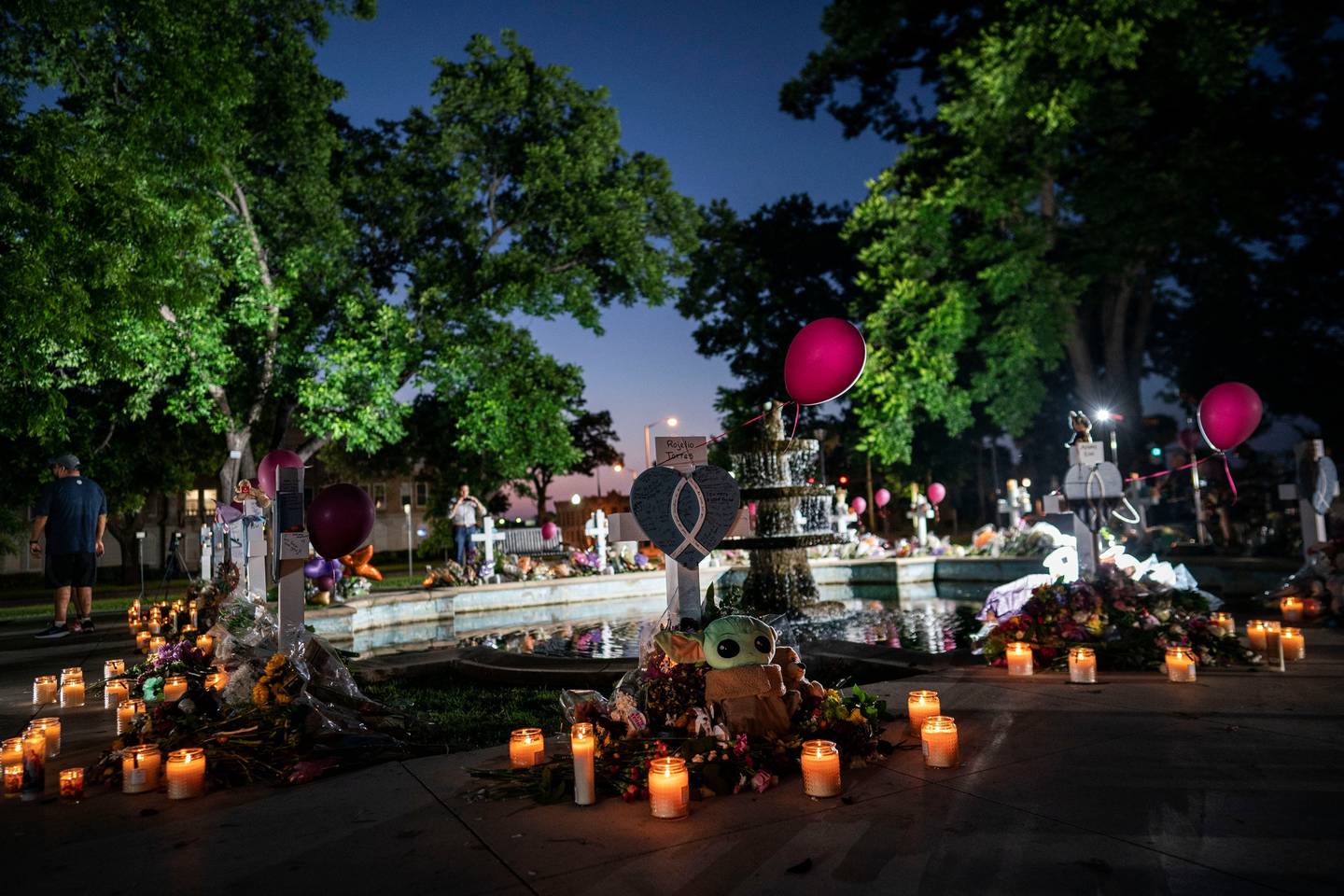 Candles are lit at dawn in the town square for the victims of the school shooting. Photo / AP

"Based on best practices, it's very difficult to understand why there were any types of delays, particularly when you get into reports of 40 minutes and up of going in to neutralise that shooter," he said.

The motive for the massacre — the nation's deadliest school shooting since Newtown, Connecticut, almost a decade ago — remained under investigation, with authorities saying Ramos had no known criminal or mental health history.

During the siege, frustrated onlookers urged police officers to charge into the school, according to witnesses.

"Go in there! Go in there!" women shouted at the officers soon after the attack began, said Juan Carranza, 24, who watched the scene from outside a house across the street.

Carranza said the officers should have entered the school sooner: "There were more of them. There was just one of him."

Cazares said that when he arrived, he saw two officers outside the school and about five others escorting students out of the building. But 15 or 20 minutes passed before the arrival of officers with shields, equipped to confront the gunman, he said.

As more parents flocked to the school, he and others pressed police to act, Cazares said. He heard about four gunshots before he and the others were ordered back to a parking lot.

"A lot of us were arguing with the police, 'You all need to go in there. You all need to do your jobs.' Their response was, 'We can't do our jobs because you guys are interfering,'" Cazares said.

Michael Dorn, executive director of Safe Havens International, which works to make schools safer, cautioned that it's hard to get a clear understanding of the facts soon after a shooting.

"The information we have a couple of weeks after an event is usually quite different than what we get in the first day or two. And even that is usually quite inaccurate," Dorn said. For catastrophic events, "you're usually eight to 12 months out before you really have a decent picture".