The 18-year-old gunman who killed 21 people at a Texas elementary school walked in unimpeded through an apparently unlocked door, a law enforcement official said Thursday.

The gunman, Salvador Ramos, was also apparently inside the building for at least three-quarters of an hour before Border Patrol agents stormed a classroom and killed him, according to the timeline given by Victor Escalon, a regional director at the Texas Department of Public Safety.

The school normally has an armed school safety officer. But when Ramos arrived on Tuesday, "there was not an officer, readily available, armed", and the gunman entered the building "unobstructed", Escalon said.

Law enforcement authorities faced mounting questions and anger over the amount of time that elapsed before they stormed the place and put a stop to the rampage at Robb Elementary School in Uvalde that left 19 children and two teachers dead.

Many other details of the case and the police response remained murky. The motive for the massacre — the nation's deadliest school shooting since Newtown, Connecticut, a decade ago — remained under investigation, with authorities saying Ramos had no known criminal or mental health history. 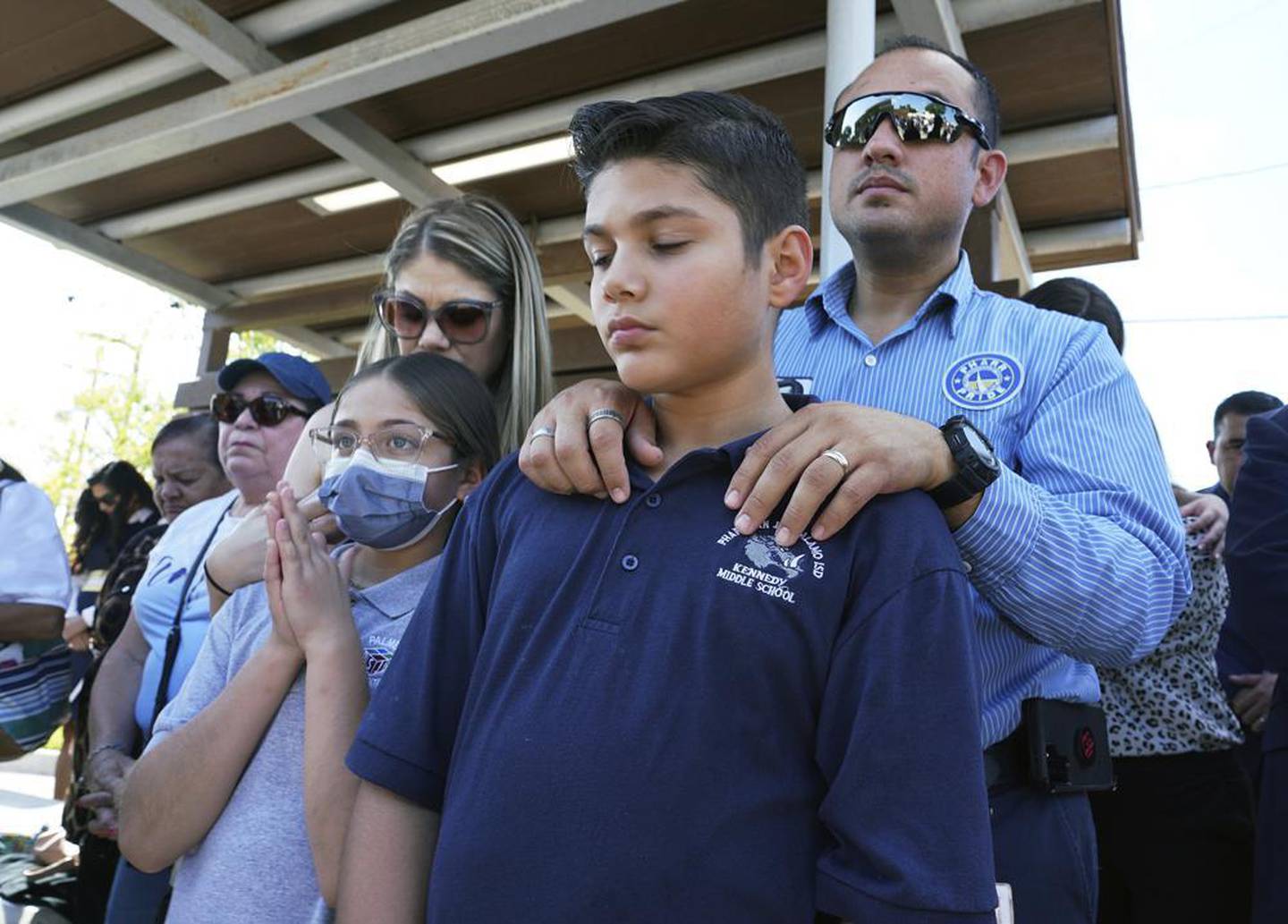 Omahar Padillo holds on to his son Omahar Jr., 12, during a community prayer Wednesday, May 25, 2022, in Pharr, Texas, for the shooting victims at Robb Elementary School in Uvalde, Texas. Photo / AP

During the siege, which ended when a US Border Patrol team burst in and shot the gunman to death, frustrated onlookers urged police officers to charge into the school, according to witnesses.

"Go in there! Go in there!" women shouted at the officers soon after the attack began, said Juan Carranza, 24, who watched the scene from outside a house across the street.

Carranza said the officers should have entered the school sooner: "There were more of them. There was just one of him."

Texas Department of Public Safety Director Steve McCraw said Wednesday that 40 minutes to an hour elapsed from when Ramos opened fire on the school security officer to when the tactical team shot him.

"The bottom line is law enforcement was there," McCraw said. "They did engage immediately. They did contain [Ramos] in the classroom." 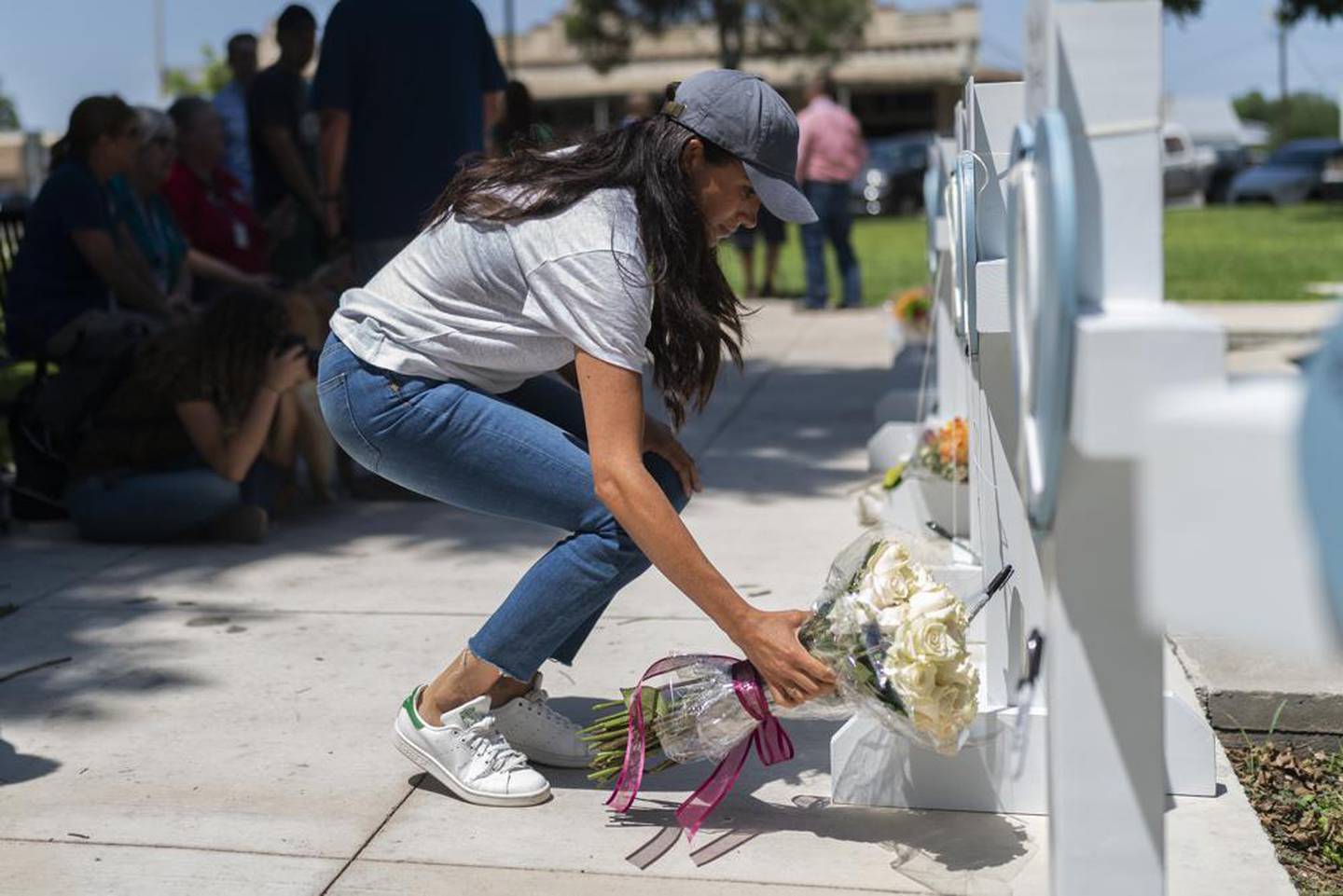 Meghan Markle, Duchess of Sussex, leaves flowers at a memorial site, Thursday, May 26, 2022, for the victims killed in this week's elementary school shooting in Uvalde, Texas. Photo / AP

But a department spokesman said Thursday that authorities were still working to clarify the timeline of the attack, uncertain whether that period of 40 minutes to an hour began when the gunman reached the school, or earlier, when he shot his grandmother at home.

"Right now we do not have an accurate or confident timeline to provide to say the gunman was in the school for this period," Lt. Christopher Olivarez told CNN.

Border Patrol Chief Raul Ortiz did not give a timeline but said repeatedly that the tactical officers from his agency who arrived at the school did not hesitate. He said they moved rapidly to enter the building, lining up in a "stack" behind an agent holding up a shield.

"What we wanted to make sure is to act quickly, act swiftly, and that's exactly what those agents did."

But a law enforcement official said that once in the building, the Border Patrol agents had trouble breaching the classroom door and had to get a staff member to open the room with a key. The official spoke on condition of anonymity because he was not authorised to talk publicly about the investigation.

Olivarez said investigators were trying to establish whether the classroom was, in fact, locked or barricaded in some way.

Javier Cazares, whose fourth grade daughter, Jacklyn Cazares, was killed in the attack, said he raced to the school as the massacre unfolded. When he arrived, he saw two officers outside the school and about five others escorting students out of the building. But 15 or 20 minutes passed before the arrival of officers with shields, equipped to confront the gunman, he said.

As more parents flocked to the school, he and others pressed police to act, Cazares said. He heard about four gunshots before he and the others were ordered back to a parking lot.

"A lot of us were arguing with the police, 'You all need to go in there. You all need to do your jobs.' Their response was, 'We can't do our jobs because you guys are interfering,'" Cazares said.

Ramos crashed his truck into a ditch outside the school, grabbed his AR-15-style semi-automatic rifle and shot at two people outside a funeral home, who ran away uninjured, according to authorities and witnesses.

As for the armed school officer, he was driving nearby but was not on campus when Ramos crashed his truck, according to a law enforcement official who was not authorised to discuss the case and spoke of condition of anonymity.

Investigators have concluded that school officer was not positioned between the school and Ramos, leaving him unable to confront the shooter before he entered the building, the law enforcement official said.