Hundreds of blue, green and grey tents are pitched under the sun's searing rays in downtown Phoenix, a jumble of flimsy canvas and plastic along dusty sidewalks. Here, in the hottest big city in America, thousands of homeless people swelter as the summer's high temperatures arrive.

The stifling tent city has ballooned amid pandemic-era evictions and surging rents that have dumped hundreds more people onto the sizzling streets that grow eerily quiet when temperatures peak in the midafternoon. A heat wave earlier this month brought temperatures of up to 45.5C - and it's only June. Highs reached 47.7C last year.

"During the summer, it's pretty hard to find a place at night that's cool enough to sleep without the police running you off," said Chris Medlock, a homeless Phoenix man known on the streets as "T-Bone" who carries everything he owns in a small backpack and often beds down in a park or a nearby desert preserve to avoid the crowds.

"If a kind soul could just offer a place on their couch indoors maybe more people would live," Medlock said at a dining room where homeless people can get some shade and a free meal.

Around the country, heat contributes to 1500 deaths annually, and advocates estimate that about half of those people are homeless.

Temperatures are rising nearly everywhere because of global warming, combining with brutal drought in some places to create more intense, frequent and longer heat waves. The past few summers have been some of the hottest on record.

Just in the county that includes Phoenix, at least 130 homeless people were among the 339 individuals who died from heat-associated causes in 2021. 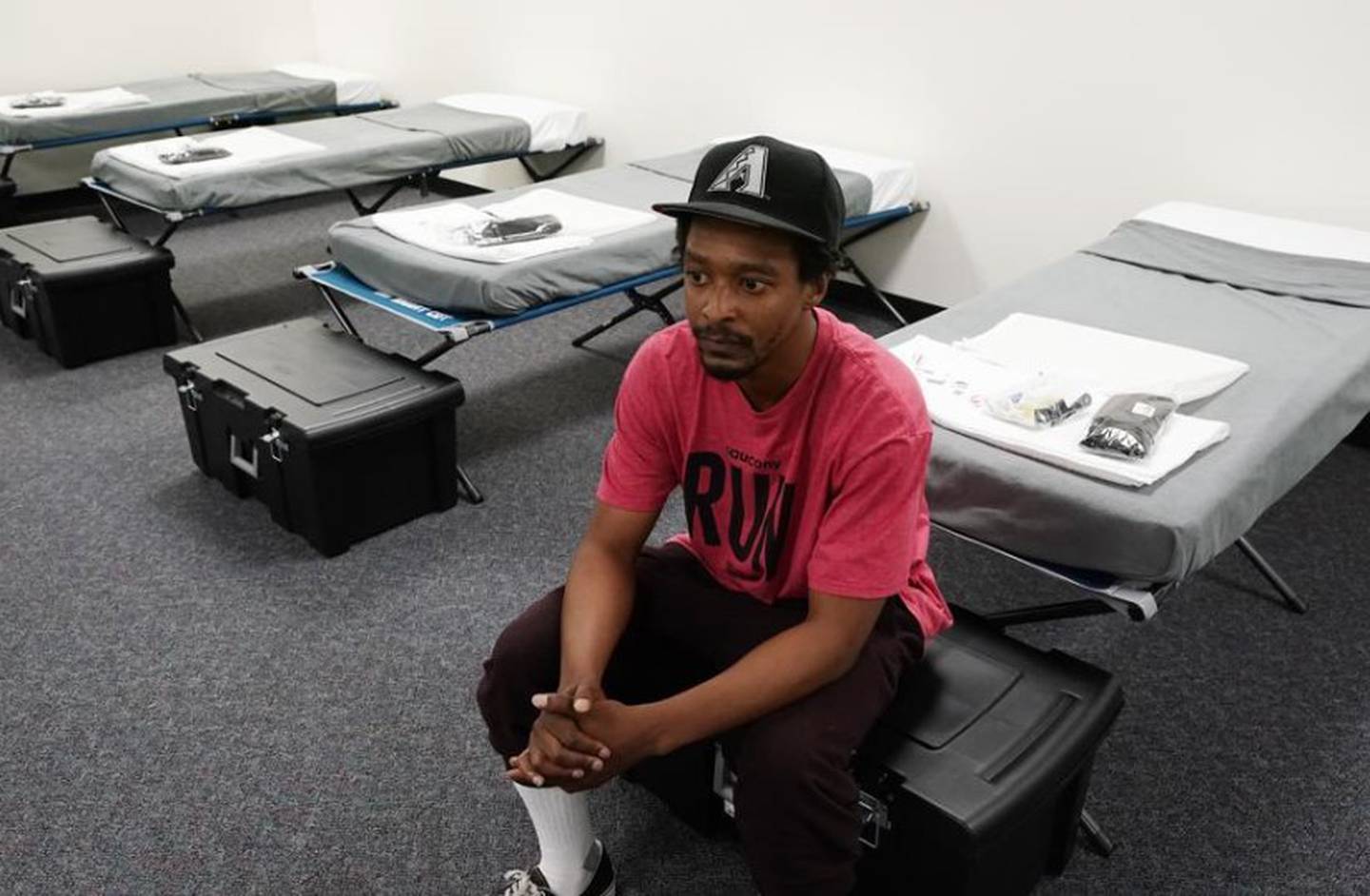 Mac Mais, 34, who has been homeless on and off since he was a teen, sits inside a converted vacant building turned into a 200-bed shelter. Photo / AP

"If 130 homeless people were dying in any other way it would be considered a mass casualty event," said Kristie L. Ebi, a professor of global health at the University of Washington.

It's a problem that stretches across the United States, and now, with rising global temperatures, heat is no longer a danger just in places like Phoenix.

This summer will likely bring above-normal temperatures over most land areas worldwide, according to a seasonal map that volunteer climatologists created for the International Research Institute at Columbia University.

Last summer, a heat wave blasted the normally temperate U.S. Northwest and had Seattle residents sleeping in their yards and on roofs, or fleeing to hotels with air conditioning. Across the state, several people presumed to be homeless died outdoors, including a man slumped behind a gas station.

In Oregon, officials opened 24-hour cooling centers for the first time. Volunteer teams fanned out with water and popsicles to homeless encampments on Portland's outskirts.

Even Boston is exploring ways to protect diverse neighbourhoods like its Chinatown, where population density and few shade trees help drive temperatures up to 41C some summer days. The city plans strategies like increasing tree canopy and other kinds of shade, using cooler materials for roofs, and expanding its network of cooling centres during heat waves.

It's not just a U.S. problem. An Associated Press analysis last year of a dataset published by the Columbia University's climate school found exposure to extreme heat has tripled and now affects about a quarter of the world's population. 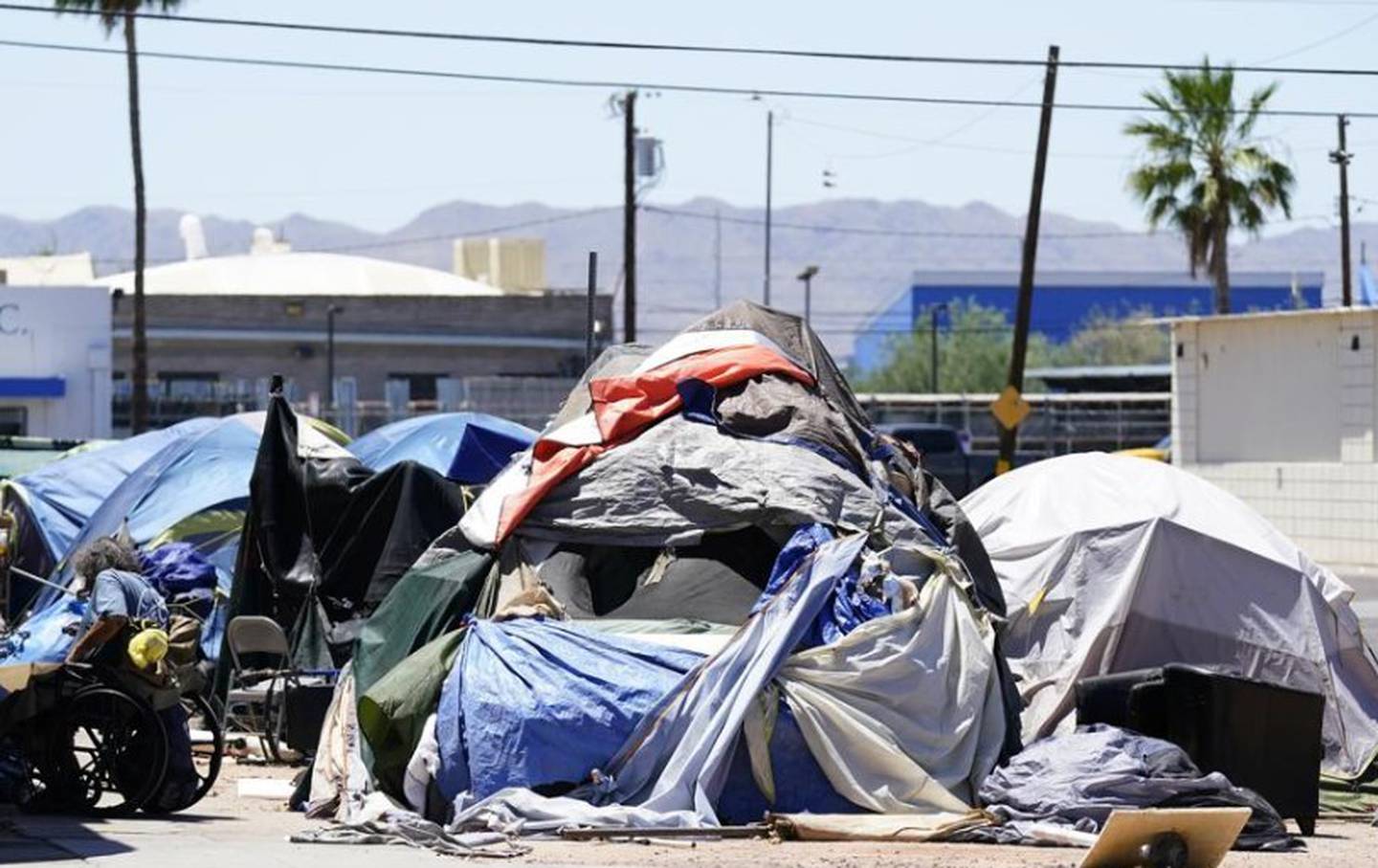 A homeless encampment grows in size in Phoenix. Photo / AP

This spring, an extreme heat wave gripped much of Pakistan and India, where homelessness is widespread due to discrimination and insufficient housing. The high in Jacobabad, Pakistan near the border with India hit 50C in May.

Dr. Dileep Mavalankar, who heads the Indian Institute of Public Health in the western Indian city Gandhinagar, said because of poor reporting it's unknown how many die in the country from heat exposure.

Summertime cooling centres for homeless, elderly and other vulnerable populations have opened in several European countries each summer since a heat wave killed 70,000 people across Europe in 2003.

Emergency service workers on bicycles patrol Madrid's streets, distributing ice packs and water in the hot months. Still, some 1300 people, most of them elderly, continue to die in Spain each summer because of health complications exacerbated by excess heat.

Spain and southern France last week sweltered through unusually hot weather for mid-June, with temperatures hitting 40C in some areas.

Climate scientist David Hondula, who heads Phoenix's new office for heat mitigation, says that with such extreme weather now seen around the world, more solutions are needed to protect the vulnerable, especially homeless people who are about 200 times more likely than sheltered individuals to die from heat-associated causes.

"As temperatures continue to rise across the US and the world, cities like Seattle, Minneapolis, New York or Kansas City that don't have the experience or infrastructure for dealing with heat have to adjust as well."

In Phoenix, officials and advocates hope a vacant building recently converted into a 200-bed shelter for homeless people will help save lives this summer.

"It can be rough. I stay in the shelters or anywhere I can find," said Mais who has been homeless on and off since he was a teen. "Here, I can stay out actually rest, work on job applications, stay out of the heat."

In Las Vegas, teams deliver bottled water to homeless people living in encampments around the county and inside a network of underground storm drains under the Las Vegas strip.

Through its warning system, nongovernmental groups reach out to vulnerable people and send text messages to mobile phones. Water tankers are dispatched to slums, while bus stops, temples and libraries become shelters for people to escape the blistering rays.

Still, the deaths pile up.

Kimberly Rae Haws, a 62-year-old homeless woman, was severely burned in October 2020 while sprawled for an unknown amount of time on a sizzling Phoenix blacktop. The cause of her subsequent death was never investigated. 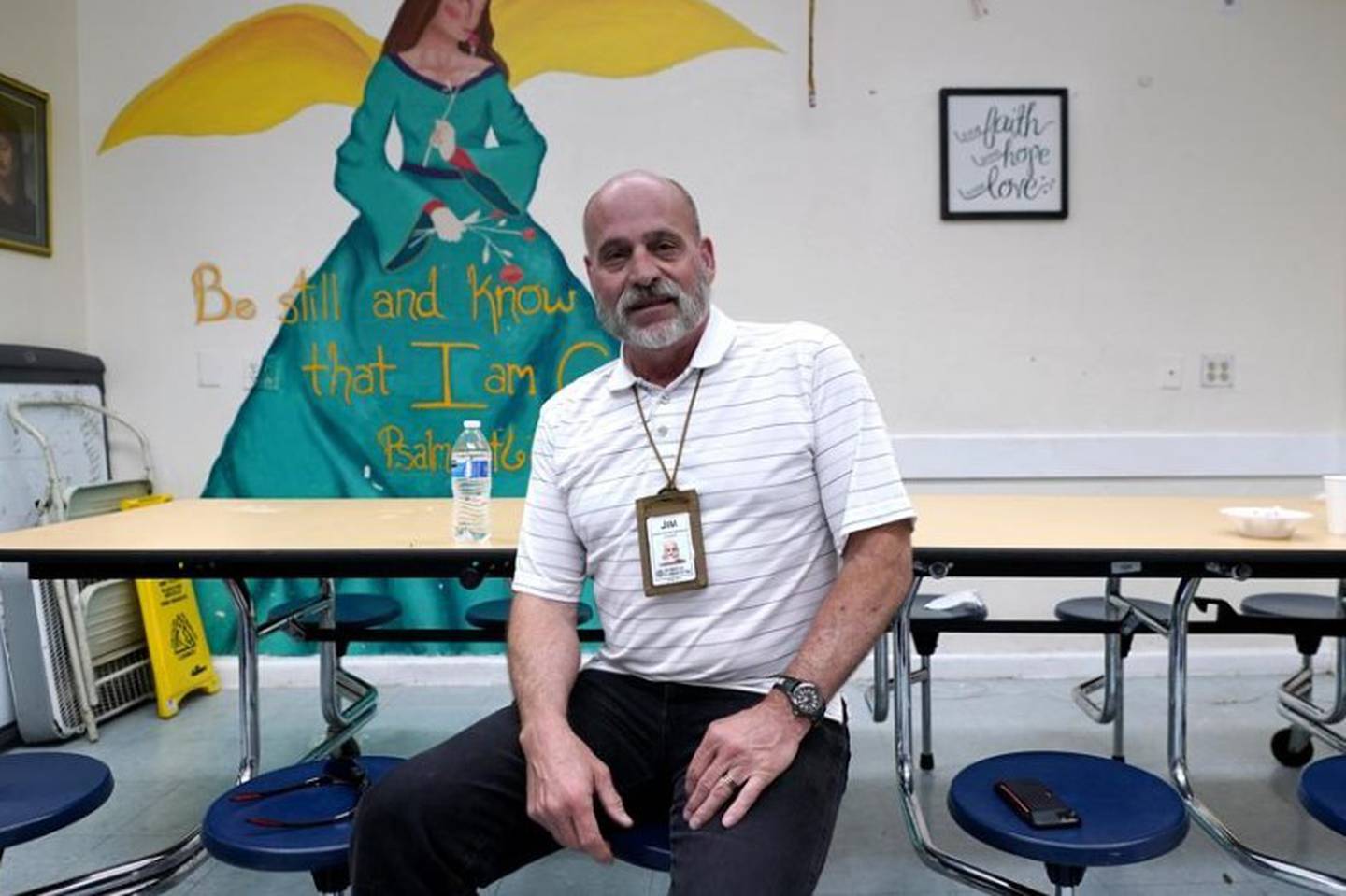 Jim Baker, who oversees that dining room for the St. Vincent de Paul charity, sits in the dining room after dinner. Photo / AP

A young man nicknamed Twitch died from heat exposure as he sat on a kerb near a Phoenix soup kitchen in the hours before it opened one weekend in 2018.

"He was supposed to move into permanent housing the next Monday," said Jim Baker, who oversees that dining room for the St. Vincent de Paul charity. "His mother was devastated."

Many such deaths are never confirmed as heat related and aren't always noticed because of the stigma of homelessness and lack of connection to family.

When a 62-year-old mentally ill woman named Shawna Wright died last summer in a hot alley in Salt Lake City, her death only became known when her family published an obituary saying the system failed to protect her during the hottest July on record, when temperatures reached the triple digits.

Her sister, Tricia Wright, said making it easier for homeless people to get permanent housing would go a long way toward protecting them from extreme summertime temperatures.

"We always thought she was tough, that she could get through it," Tricia Wright said of her sister. "But no one is tough enough for that kind of heat."