In the first of his new wildlife series, Brett Atkinson relives his favourite animal encounters from across the globe. This week, he tracks desert-adapted lions and elephants in Namibia.

Seen from the front seat of an agile and compact Cessna 210, the Hoanib River in Namibia's dry season resembles the narrowest of dirt tracks, prescribing a meandering route from the craggy mountain-rimmed expanses of the Kaokoveld to the rolling Atlantic dunes of the Skeleton Coast. Heading out on a Land Cruiser expedition from Wilderness Safaris' Hoanib Skeleton Coast tented camp, the river's sky-high spidery route is actually revealed to be far wider and more rugged than first envisaged, and our 4WD vehicle rises and falls to conquer the bumpy terrain, surfing along banks of sand lining the river, and surging through twisted tangles of vegetation. 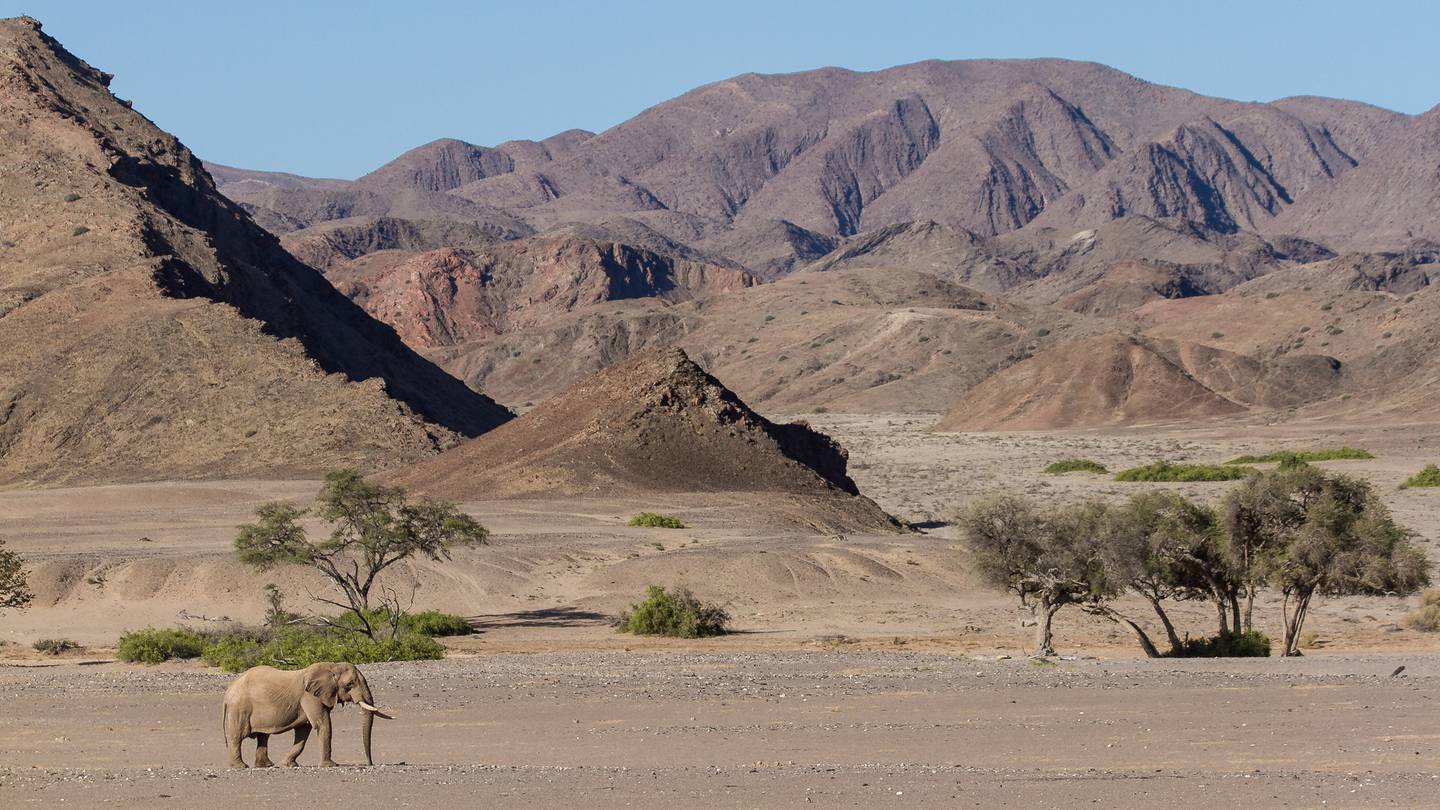 When the annual rains come, usually as an impetuous series of downfalls from November to April, the river can be transformed into a swiftly-flowing torrent in just a few hours but for most of the year, the Hoanib's bone-dry river bed is a vital migratory route for the desert-adapted animals surviving in this remote area of Africa's fifth-largest and most sparsely populated country. Elephants, lions, oryx and springbok all derive sustenance from the scrubby trees lining the river, and over millennia, the wildlife species of the surrounding Damaraland region have evolved to be smaller, leaner and more hardy than their cousins on the savannah of East Africa.

To the untrained observer, Damaraland initially looks like an animal-free zone, with its red-rock cliffs and canyons bookended by soaring cobalt skies but after years of working in this unique landscape, Petrus is able to read it like a book. He's soon processing information from an unblemished landscape that's been untouched by wind and rain for a few months, a seemingly static natural environment he carefully deciphers by way of paw prints and animal scat.

"This land is like the bushman's newspaper," he informs us, and soon he's leading us to the morning's front-page news.

The Hoanib region features just a handful of extremely rare desert-adapted lions, and we're steered towards an intimate encounter with Auntie and her niece, Charlie, both wearing tracking collars to ensure their safety and monitoring. Like any cat, big or small, they seem pretty content to shelter from the morning sun in the shade of a tree, this one a spindly and spiky acacia. They're just metres away, but eye contact and raised ears mean they definitely know we're there. Petrus' advice to "keep still and remain seated" means they recognise only the larger profile of our open-sided vehicle. When Charlie rouses herself to stretch and scratch against the tree in a feline yoga pose, it's a singular moment to make the combination of multiple flights and a bumpy journey to the camp all worthwhile. Animal numbers in Namibia's Damaraland may be lower than in traditional safari hotspots such as Botswana and Kenya but when careful tracking and on-the-ground detective work ensures a successful big-cat encounter it's even more intense and special. Like any cat, big or small, the lioness seems pretty content to shelter from the morning sun in the shade of a tree. Photo / Carol Atkinson

Ironically, from our experience anyway, the region's elephants seem easier to track down, with a few of them actually showing up for breakfast at the camp's waterhole earlier in the day. Petrus informs us they were also weaving a lazy moonlit trail around Hoanib Skeleton Coast's scattering of luxury tents a few hours earlier.

Our own up-close-and-personal elephant encounter coincides with an afternoon traffic jam Hoanib-style. As the Land Cruiser carefully rounds a bend in the river, a family of elephants is revealed coming the other way, grazing along the banks, and clearly not overly fussed with any human interlopers. Adolescent female elephants, most likely aunts and cousins, linger to provide shelter and support to the smallest and most vulnerable of their extended family, but the older and more established of the herd continue confidently towards us. Trunks are raised in curiosity, sniffing out our unfamiliar aromas, and being adroitly used to gently tear branches and leaves from riverside vegetation. Up-close elephant experiences make the multiple flights and a bumpy journey to the camp all worthwhile. Photo / Carol Atkinson

The huge beasts eventually surround us like a Dumbo-sized Namibian version of the classic Kiwi flock of sheep, taking at least 30 minutes to gently and patiently move past.

After more than half an hour of quietly observing them, literally at an arm's length away, it's uncertain which of us gently mouths "Wow" first.

When to go: Plan to visit Namibia's Damaraland region during the cooler and drier season from June to October.

Planning ahead: For tailor-made safaris with Wilderness Safaris and small group escorted tours in Africa, contact the Africa experts at World Journeys. worldjourneys.co.nz/destinations/africa