Scores of civilians were feared killed or wounded in a Russian missile strike Monday on a crowded shopping mall in Ukraine's central city of Kremenchuk, Ukrainian officials said.

Ukrainian President Volodymyr Zelenskyy said in a Telegram post that the number of victims was "unimaginable," citing reports that more than 1000 civilians were inside at the time of the attack. Images from the scene showed giant plumes of black smoke from a shopping center engulfed in flames, as emergency crews rushed in and onlookers watched in distress.

At least 10 people were dead and more than 40 wounded, according to the Ukrainian regional governor.

⚡️ Zelensky: 'Russia strikes shopping center in Kremenchuk, while over thousand people inside.'

“The mall is on fire, firefighters are trying to extinguish the fire, the number of victims is impossible to imagine," said President Volodymyr Zelensky.

Zelenskyy said the target presented "no threat to the Russian army" and had "no strategic value." He accused of Russia of sabotaging "people's attempts to live a normal life, which make the occupiers so angry."

The alleged Russian missile strike carried echoes of attacks earlier in the war that caused large numbers of civilian casualties — such as one in March on a Mariupol theater where many civilians had holed up, killing an estimated 600, and another in April on a train station in eastern Kramatorsk that left at least 59 people dead.

"Russia continues to take out its impotence on ordinary civilians. It is useless to hope for decency and humanity on its part," Zelenskyy said.

Mayor Vitaliy Maletskiy wrote on Facebook that the attack "hit a very crowded area, which is 100% certain not to have any links to the armed forces." 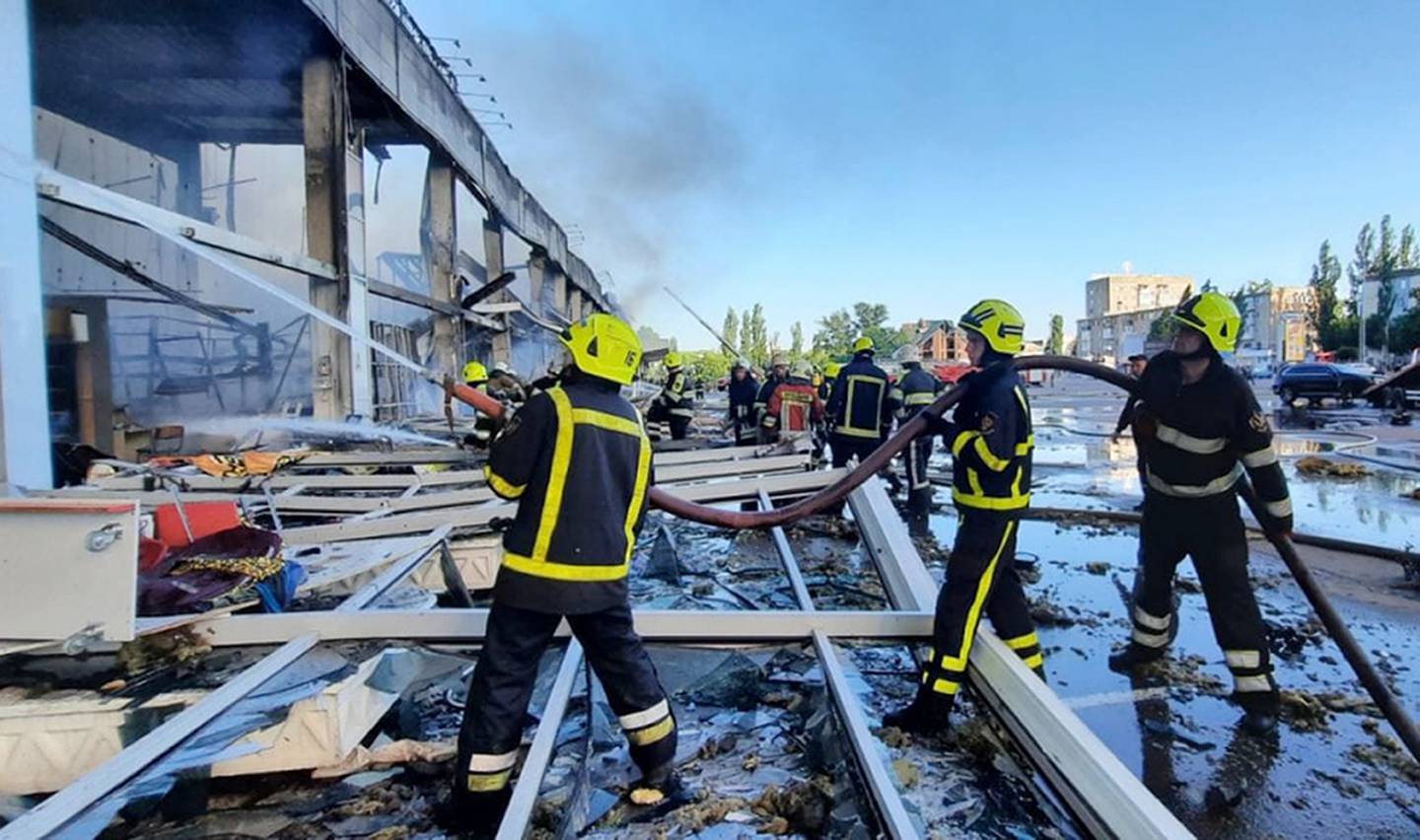 The shopping centre was engulfed in flames following the Russian attack. Photo / AP

The attack came as Russia was mounting an all-out assault on the last Ukrainian stronghold in eastern Ukraine's Luhansk province, "pouring fire" on the city of Lysychansk from the ground and air, according to the local governor.

Russian forces appeared to step up an offensive centering on trying to wrest the eastern Donbas region from Ukraine after forcing government troops out of the neighboring city of Sievierodonetsk in recent days.

Western leaders, meanwhile, pledged steadfast and continued support for Kyiv. NATO will agree to deliver further military support to Ukraine — including secure communication and anti-drone systems — when its leaders convene in Spain for a summit, according to the military alliance's secretary-general, Jens Stoltenberg. 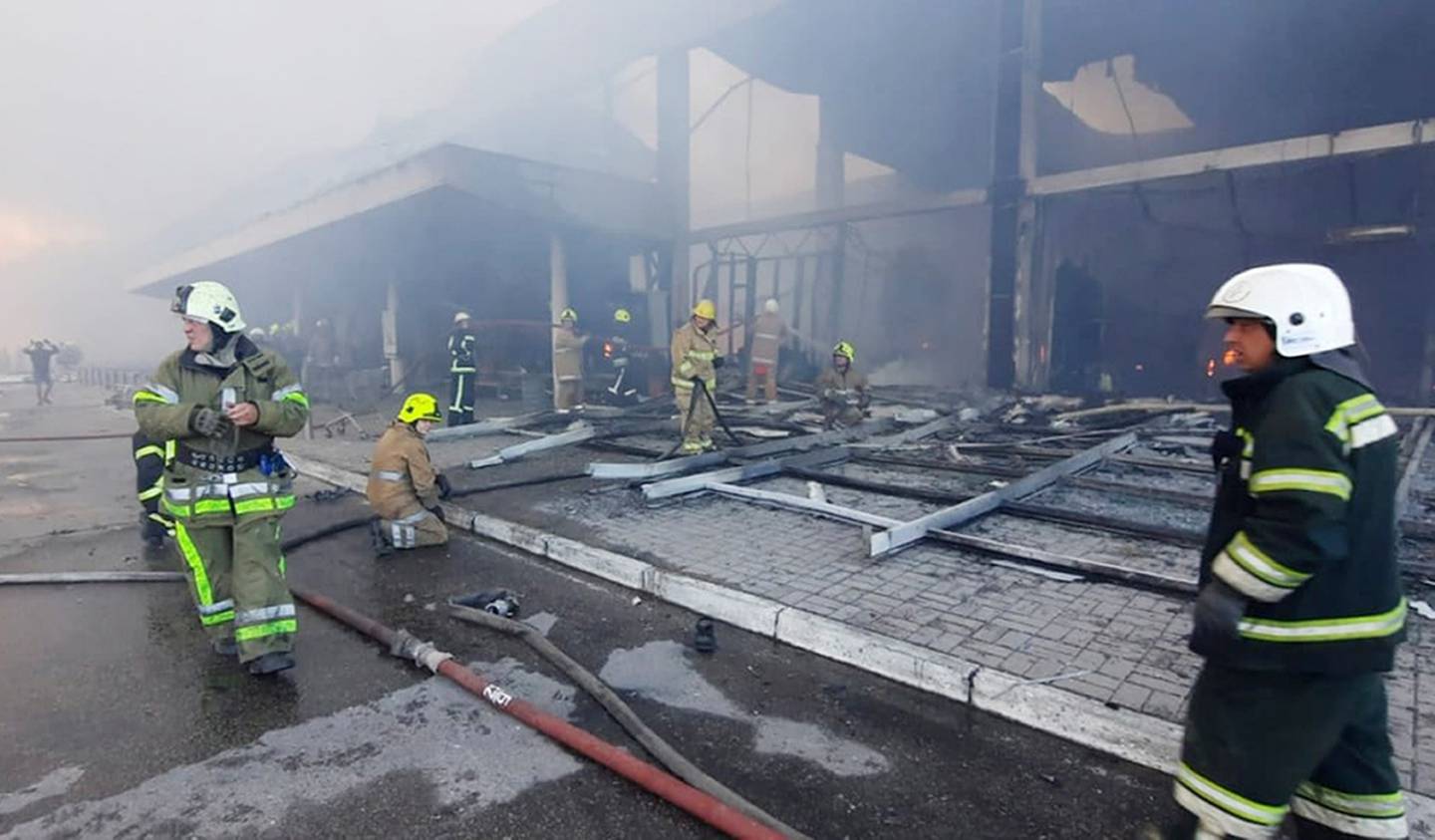 To the west of Lysychansk on Monday, the mayor of the city of Sloviansk — potentially the next major battleground — said Russian forces fired cluster munitions on the city after dawn, including one that hit a residential neighborhood.

Authorities said the number of dead and wounded had yet to be confirmed. The Associated Press saw one fatality: A man's body lay hunched over a car door frame, his blood pooling onto the ground from chest and head wounds.

The blast blew out most windows in the surrounding apartment blocks and the cars parked below, littering the ground with broken glass. 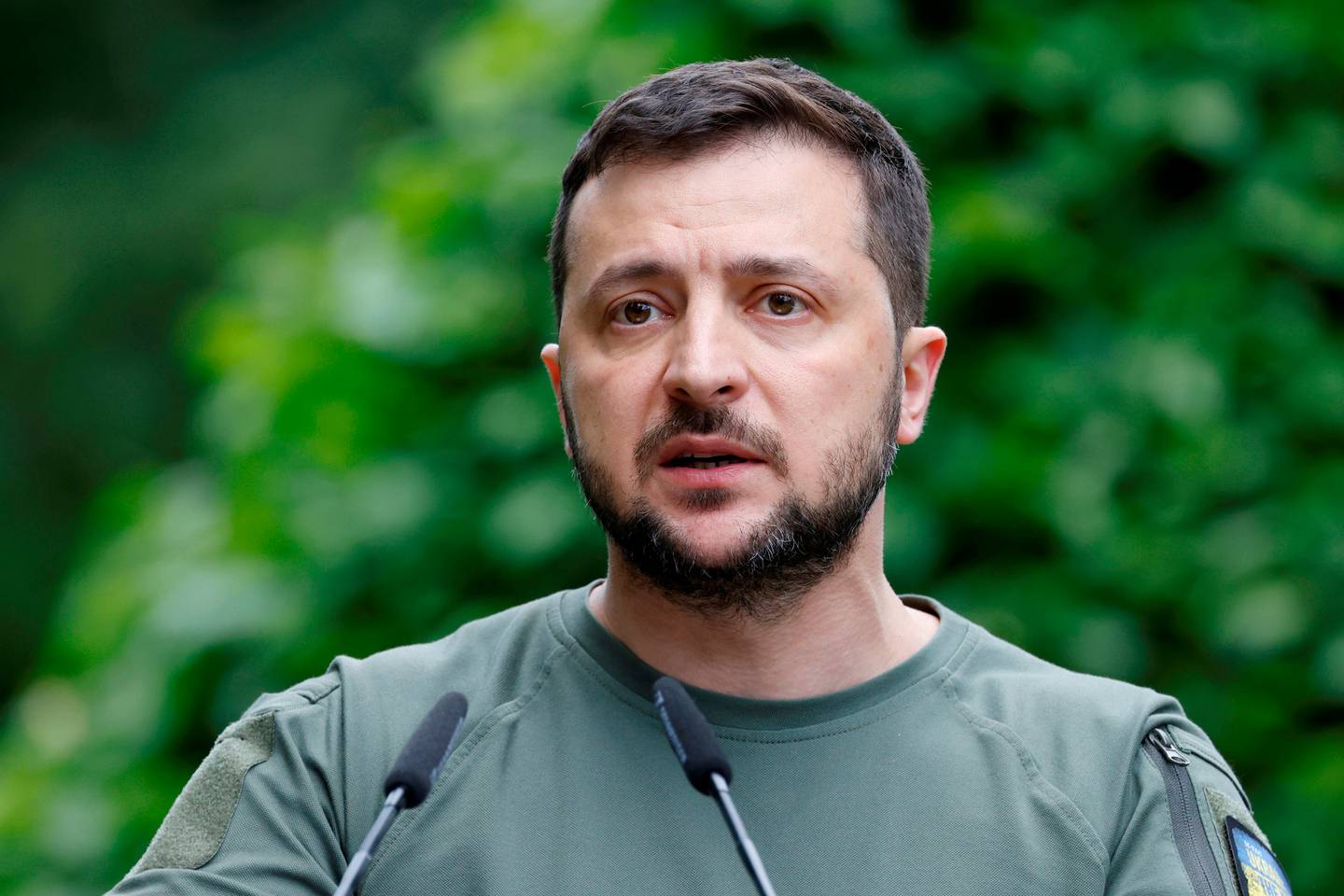 Ukraine President Volodymyr Zelenskyy said after the attack 'it is useless to hope for decency and humanity' on the part of Russia. Photo / AP

"Everything is now destroyed. We are the only people left living in this part of the building. There is no power," said local resident Valentina Vitkovska, in tears as she spoke about the blast. "I can't even call to tell others what had happened to us."

Overall, Zelenskyy's office said at least six civilians were killed and 31 others wounded as part of intense Russian shelling against various Ukrainian cities over the past 24 hours — including Kyiv and major cities in the country's south and east, but not counting the attack in Kremenchuk.

It said Russian forces fired rockets that killed two people and wounded five overnight in and near Kharkiv, Ukraine's second-largest city, and continued to target the key southern port of Odesa. A missile attack destroyed residential buildings and wounded six people, including a child, it said.

In Lysychansk, at least five high-rise buildings in the city and the last road bridge were damaged over the past day, the regional governor said. A crucial highway linking the city to government-held territory to the south was rendered impassable by shelling.

The city had a prewar population of around 100,000, approximately one-tenth of whom remain.

Analysts say that Lysychansk's location high on the banks of the Siverskiy Donets River gives a major advantage to the city's Ukrainian defenders.

"It's a very hard nut to crack. The Russians could spend many months and much effort storming Lysychansk," said military analyst Oleh Zhdanov.

In other developments, in Germany's Bavarian Alps, leaders of the Group of Seven countries pledged to continue supporting Ukraine "for as long as it takes."

In a joint statement on Monday after they held a session by video link with Zelenskyy, the leaders underlined their "unwavering commitment to support the government and people of Ukraine in their courageous defense of their country's sovereignty and territorial integrity."

The US, meanwhile, appeared ready to respond to Zelenskyy's call for more air defense systems after Russian troops hit Kyiv with long-range missiles on Sunday. Washington was expected to announce the purchase of an advanced surface-to-air missile system for Ukraine.

Britian's defense ministry said Russia is likely to rely increasingly on reserve forces in the coming weeks of the war.

Analysts have said a call-up of reservists by Russia could vastly alter the balance in the war but could also come with political consequences for President Vladimir Putin's government.