The Russian military is "tapped out of available forces" and has "close to nothing left" to draw upon in its war with Ukraine, unless Vladimir Putin makes a perilous political choice, a leading expert has said.

The Russian President's troops have been forced to retreat from the region around Ukraine's capital, Kyiv, in recent days, having failed to capture or even encircle the city, which was a key initial goal of the invasion.

Ukraine has recaptured a number of settlements in the area, discovering horrific scenes in territory abandoned by the Russians, with hundreds of civilians allegedly executed. It has also staged counter-attacks, with success, in the country's south and northeast.

Ukraine President Volodymyr Zelenskyy believes the Russians are refocusing on capturing "the Donbas and the south of Ukraine".

Whatever Putin's aims, his military currently lacks the necessary manpower to sustain a protracted war. There is, however, a way he could change that.

In short, Putin could drop the pretence that Russia is conducting a "special military operation" in Ukraine, as opposed to fighting a war.

By declaring war, he could then mobilise Russians at a national level.

The problem is, doing so would contradict the information that has been fed to Russians since the beginning of the invasion. That makes it a political risk. 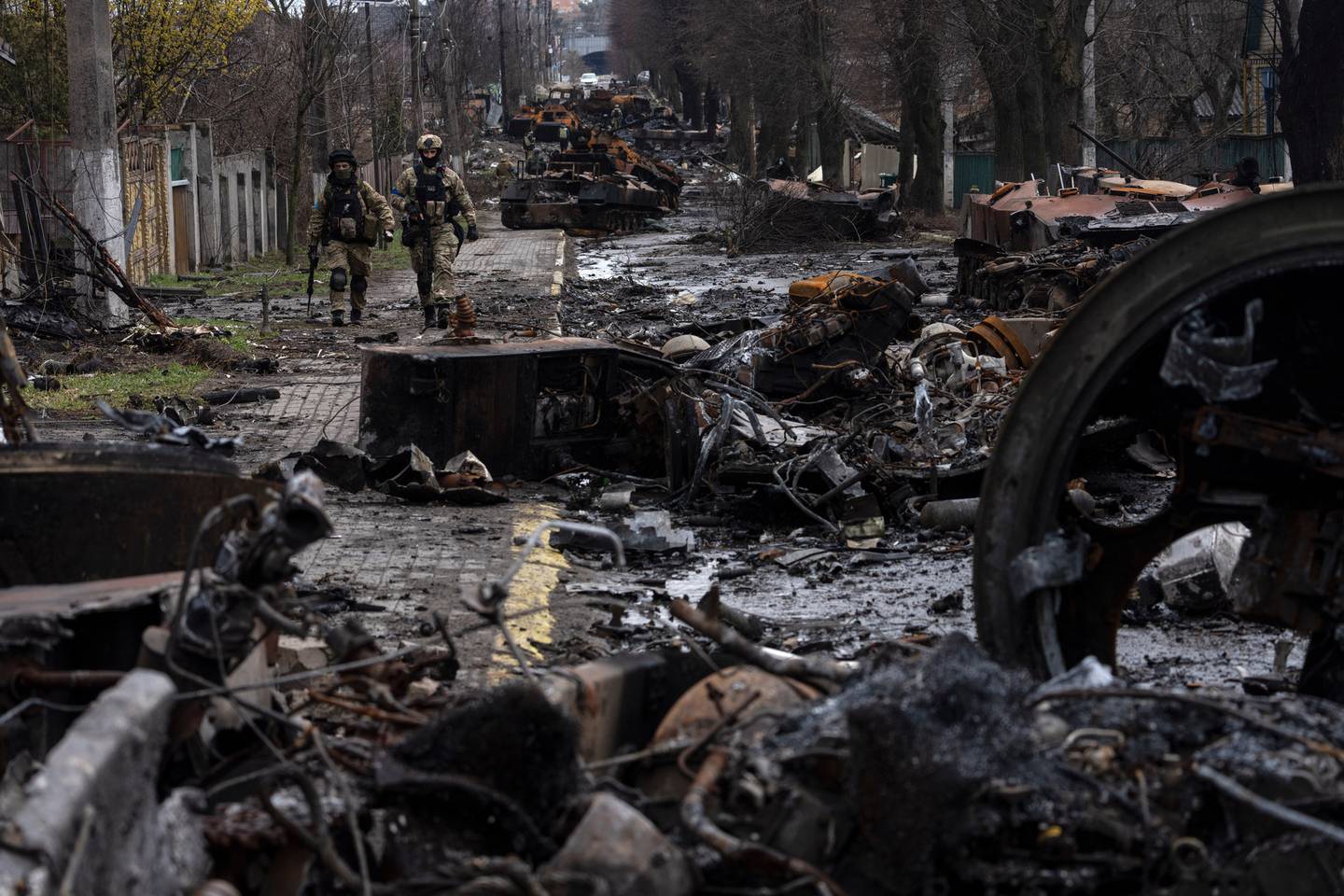 Soldiers walk amid destroyed Russian tanks in Bucha, on the outskirts of Kyiv, Ukraine, on April 3. Photo / AP

"The Russian military has taken significant casualties. After redeploying, and pulling additional units from standing formations, it may be tapped out of available forces, for now," Michael Kofman, director of Russia studies at non-profit analysis organisation the CNA, wrote today. Kofman is an expert on the Russian armed forces.

"If the Russian leadership wants to continue this war, it has to make a significant political choice. They cannot sustain a long war against Ukraine as a special operation, and they do not want to reframe it as a war. This has implications for force availability.

"Moscow is trying to fight a war with the largest country in Europe without declaring a state of war at home. Ukraine has fully mobilised, and has extensive Western support. Russia may technically have more manpower and matériel on paper, but it is politically inaccessible."

At the beginning of the month, Putin signed a decree conscripting 134,500 more men between the ages of 18 and 27 into the Russian army as part of the annual spring draft.

That sounds like a huge injection of manpower. But conscripts typically only serve for one year. That means thousands who were conscripted in last year's spring draft are reaching the end of their service.

"Since Moscow has not declared a war, it has no political basis for retaining conscripts," Kofman explained.

"There are rumours that they're offering sizeable payouts to those willing to sign a contract, including conscripts getting out of service, and those with prior military experience.

"There are also cases where conscripts are intimidated into switching to contract service, sometimes given the choice between months of difficult serving conditions and signing a contract." 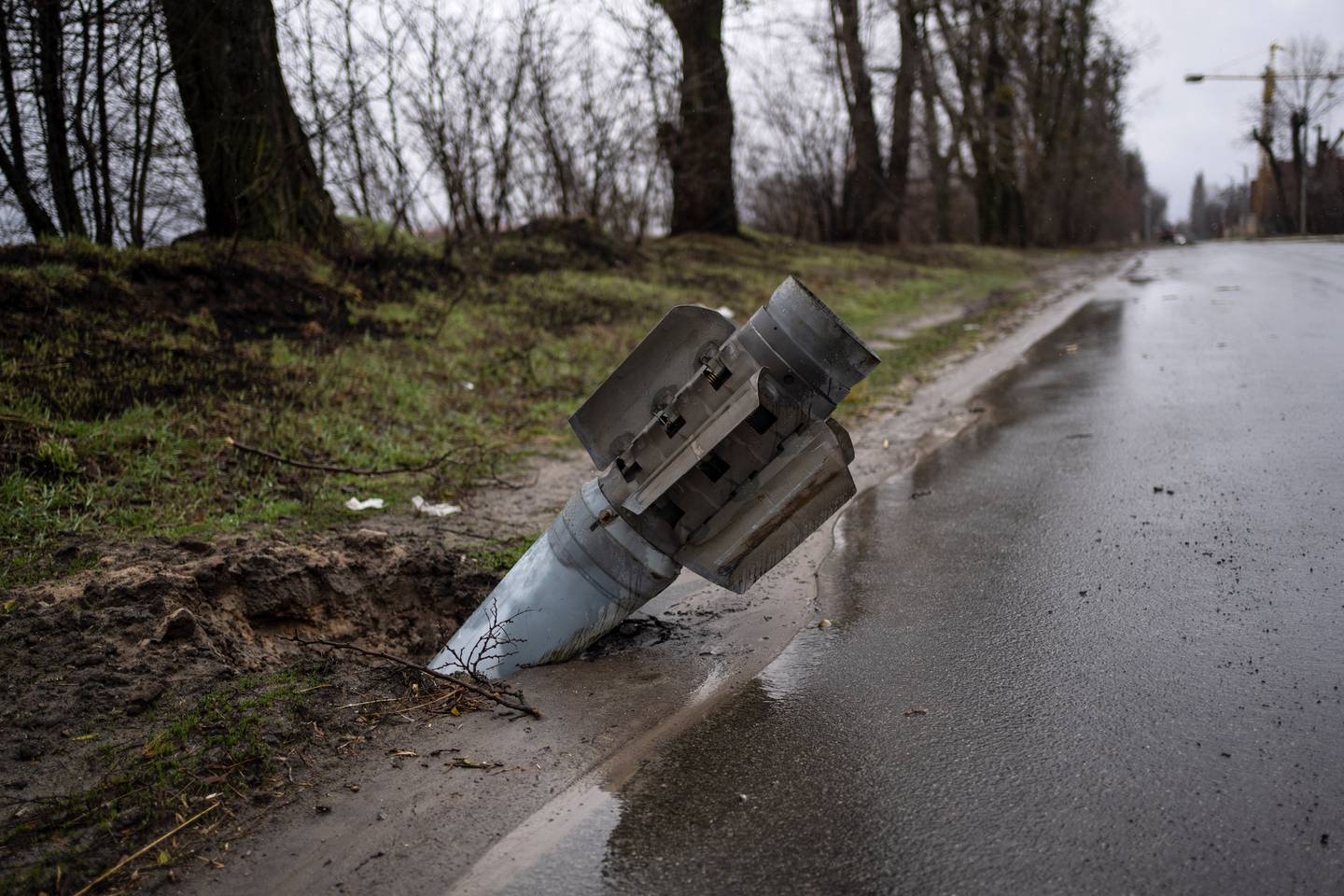 A rocket is buried in the ground in Bucha, Ukraine, on April 3. Photo / AP

There is also the wrinkle that the Russian government has claimed none of the new conscripts will be sent to "hotspots". According to Defence Minister Sergei Shoigu, they will spend up to five months in training.

Technically, under Russian law, conscripts cannot be deployed to combat without these months of training – unless a general mobilisation is declared.

Putin may decide that such a mobilisation is necessary.

"The Russian military is not prepared for a long war, and expected this 'operation' to be done within days. Now a significant part of the force is exhausted," Kofman said.

He estimated Russia had lost roughly 30 battalions' worth of equipment, which would cause "substantially reduced combat effectiveness". "The Russian military has pulled together what they could from the remaining standing force, including bases abroad, and in Kaliningrad. There's now close to nothing left to send beyond those battalions that have recently arrived to support offensives in the Donbas."

He said the assortment of "auxiliary" forces Russia was using, such as the mercenaries from Syria and the paramilitary organisation Wagner, would "not make a difference" in the war.

"They can amount to a few battalions more at best. They're symptomatic of the problem: Russia is short on troops and looking to get manpower where they can," he said.

"In short, Russia can get more battalions, but without a national mobilisation its ability to pursue the war beyond the Donbas looks very circumspect.

"And it can't get more units quickly. Right now, the Russian military has to fight largely with what it has managed to put together.

"However, if Putin chooses to declare a state of war and conduct national mobilisation, the situation becomes a lot more complicated. In that case, Russian manpower and materiel availability would be subject to a decidedly different set of calculations.

"Would he have the domestic support to do it? Entirely up for debate."