But after his disastrous invasion of Ukraine, now Putin has to twiddle his thumbs as he waits for other heads of state to turn up for meetings with him.

In a toe-curling 48-second video, Putin is seen awkwardly shuffling from side-to-side as he waits for Turkish president Recep Erdogan to rock up for talks in the Iranian capital Tehran.

With the world's press gawping, Putin had nowhere to hide as he patiently awaited the Turkish leader's arrival.

Those 50 seconds that Erdogan made Putin wait, looking frazzled in-front of cameras say plenty of how much has changed after Ukraine: pic.twitter.com/giGirqaYYP

Erdogan may have been exacting revenge upon Putin, who once made him wait two minutes in front of TV cameras before a meeting in 2020.

Putin made the rare trip overseas to meet Erdogan to discuss how to ease the path for Black Sea exports of Ukrainian grain, of which a blockade is causing food shortages around the world.

After talks with Erdogan and Iran's president, Putin told reporters that any deal hinged on the West's willingness to yield some ground.

"We will facilitate the export of Ukrainian grain, but we are proceeding from the fact that all restrictions related to possible deliveries for the export of Russian grain will be lifted," he said.

Nato member Turkey has been using its good relations with the Kremlin and Kyiv to try to broker an agreement on a safe way to deliver the grain. 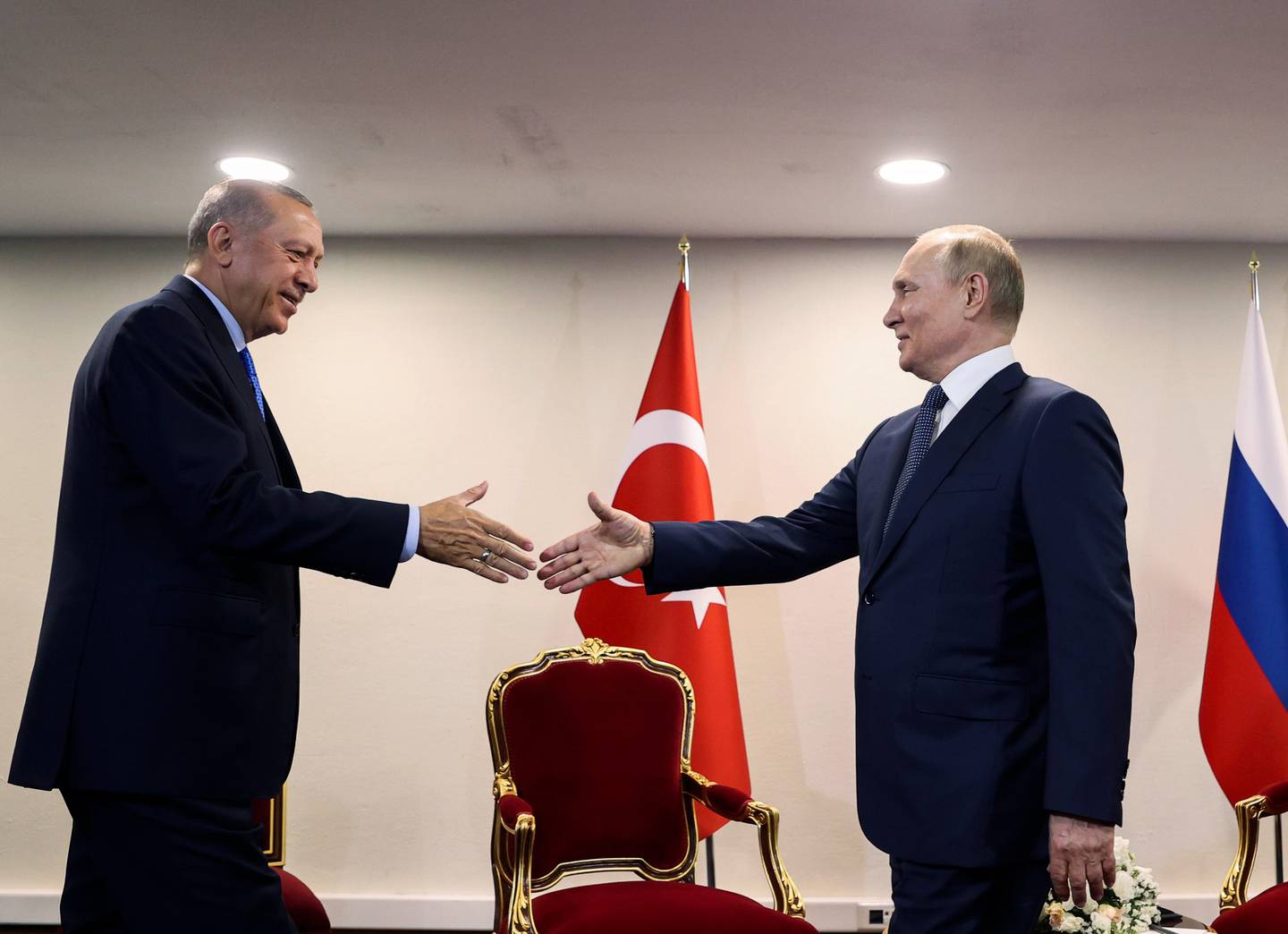 On Wednesday, Russian and Ukrainian delegations are due to meet in Istanbul alongside Turkish and UN representatives, with hopes rising for an announced accord.

The EU's foreign policy chief Josep Borrell warned this week that the grain impasse was "an issue of life and death for many human beings".

And a document consulted by AFP on Tuesday showed that the European Commission is proposing to unblock assets at Russian banks linked to trade in food and fertiliser.

Along the Black Sea coast, Kyiv said a barrage of seven cruise missiles had wounded at least six people, including a child, in the southern coastal region of Odessa.

The Russian defence ministry claimed that strikes on Odessa had destroyed a stockpile of Western-supplied weapons.

Russian Defence Minister Sergei Shoigu ordered troops this week to prioritise the destruction of long-range artillery supplied by the United States and Ukraine's other Western allies.

Ukrainian Defence Minister Oleksiy Reznikov, during a visit to the United States, urged the West to drastically step up its supply of precision rocket systems, calling them a "game-changer".

"Russia is beginning to roll out a version of what you could call an annexation playbook, very similar to the one we saw in 2014," when it invaded and annexed Crimea, Kirby said.

Zelenskyy's chief of staff Andriy Yermak underlined in an interview published Tuesday that Ukraine had to win its war with Russia before winter, telling Ukrainian weekly Novoye Vremya that if Moscow has time to regroup, it will be "more difficult". 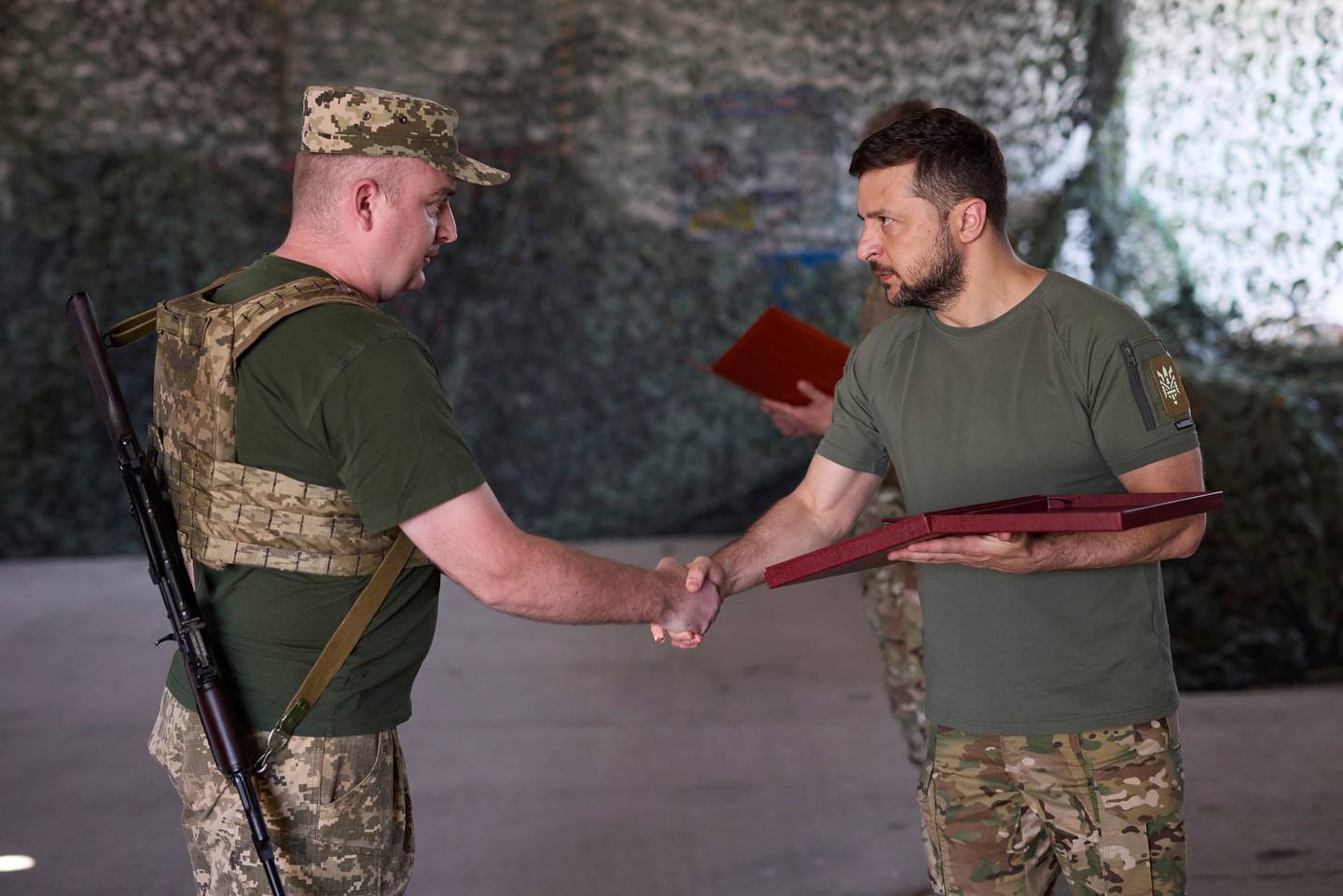 On the diplomatic front, Russia's close ally Syria announced Wednesday it was severing ties with Ukraine, according to an unidentified foreign ministry official, cited by state news agency Sana.

Kyiv had already announced it was cutting ties with Syria late last month, after Damascus recognised the Russian-backed breakaway republics of Donetsk and Lugansk in eastern Ukraine.

Other deputies said the plea to remove security chief Ivan Bakanov had secured the required 226 votes.

Zelenskyy late Sunday said he was suspending the senior law enforcement officials - and that 650 cases of suspected treason were under investigation.

He replaced Bakanov on Monday and described the shake-up in the security services as an "audit", saying 28 security officials were facing dismissal.

The governor of Mykolaiv, a southern region under constant Russian rocket fire, meanwhile on Tuesday promised a $100 reward for anyone who could help to identify people who have been collaborating with Russia by providing it with the locations of Ukrainian troops or coordinates of potential targets.