A captured Russian soldier who pleaded guilty to killing a civilian was sentenced by a Ukrainian court Monday to life in prison — the maximum — amid signs the Kremlin may, in turn, put on trial some of the fighters who surrendered at Mariupol's steelworks.

Meanwhile, in a rare public expression of opposition to the war from the ranks of the Russian elite, a veteran Kremlin diplomat resigned and sent a scathing letter to foreign colleagues in which he said of the invasion, "Never have I been so ashamed of my country as on Feb. 24." 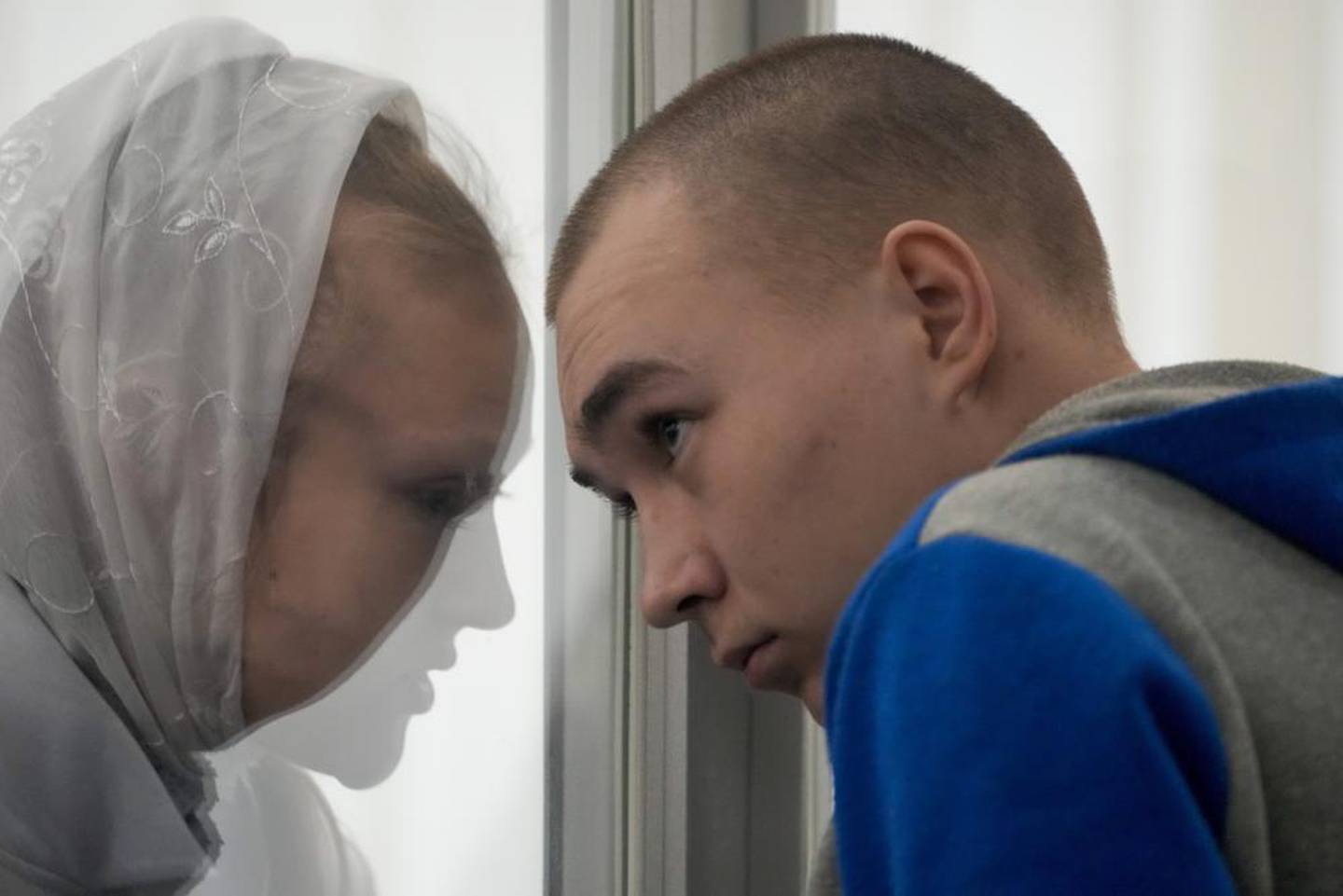 Also, Ukrainian President Volodymyr Zelenskyy called for "maximum" sanctions against Russia in a video address to world leaders and executives at the World Economic Forum in Davos, Switzerland.

And on the battlefield, heavy fighting raged in the Donbas in the east, where Moscow's forces have stepped up their bombardment. Cities not under Russian control were constantly shelled, and one Ukrainian official said Russian forces targeted civilians trying to flee.

In the first of what could be a multitude of war crimes trials held by Ukraine, Russian Sergeant Vadim Shishimarin, 21, was sentenced for the killing of a 62-year-old man who was shot in the head in a village in the northeastern Sumy region in the opening days of the war.

Shishimarin, a member of a tank unit, had claimed he was following orders, and he apologised to the man's widow in court.

His Ukraine-appointed lawyer, Victor Ovsyanikov, argued his client had been unprepared for the "violent military confrontation" and mass casualties that Russian troops encountered when they invaded. He said he would appeal.

Ukrainian civil liberties advocate Volodymyr Yavorskyy said it was "an extremely harsh sentence for one murder during the war". But Aarif Abraham, a British-based human rights lawyer, said the trial was conducted "with what appears to be full and fair due process", including access to a lawyer.

Ukrainian prosecutors are investigating thousands of potential war crimes. Russian forces in Mariupol bombed a theatre where civilians were sheltering and struck a maternity hospital. In the wake of Moscow's withdrawal from around Kyiv weeks ago, mass graves were discovered and streets were strewn with bodies in towns such as Bucha. 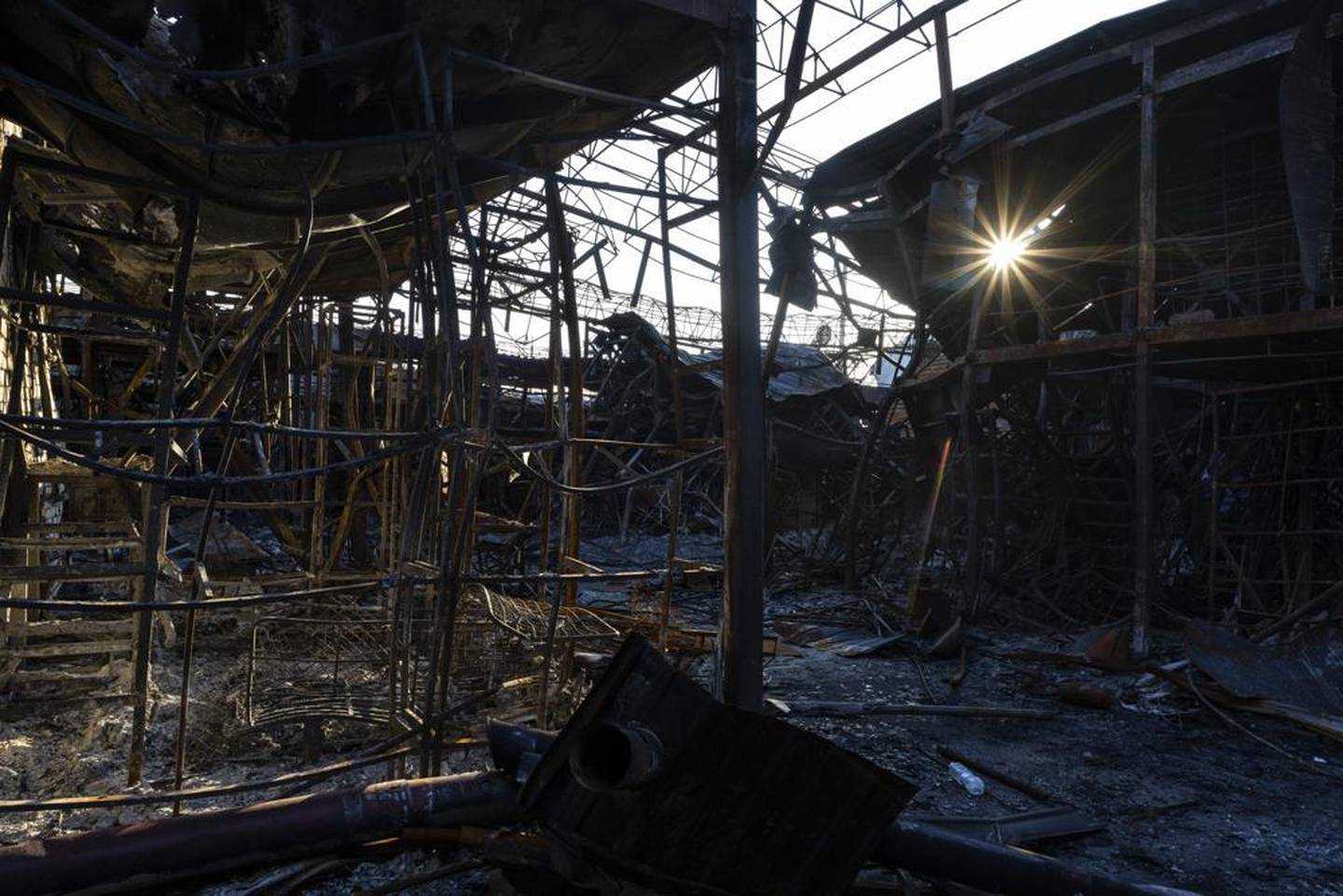 The sun's rays pass through charred structures of one of the shelled sections of the Barabashovo market in Kharkiv. Photo / AP

Before Shishimarin's sentencing, Kremlin spokesman Dmitry Peskov said that Moscow was unable to defend the soldier but will consider trying to do so "through other channels".

Mary Ellen O'Connell, an expert on international law at the University of Notre Dame, said that putting Shishimarin on trial could prove "extremely detrimental to Ukrainian soldiers in the hands of Russia". She said Russia may decide to hold "show trials" of Ukrainians to boost the morale of its own soldiers and spread disinformation.

"Maybe it would have happened without the Ukrainians beginning trials," O'Connell said. "But the timing suggests that the Ukrainians should have held back and perhaps still should, so that the Russians can't say, 'We're just doing to their soldiers what they did to ours'."

Russian authorities have threatened to hold trials of captured Ukrainians — namely, fighters who held out at Mariupol's shattered steel plant, the last stronghold of resistance in the strategic southern port city. They surrendered and were taken prisoner last week, at which point Moscow claimed the capture of Mariupol was complete. 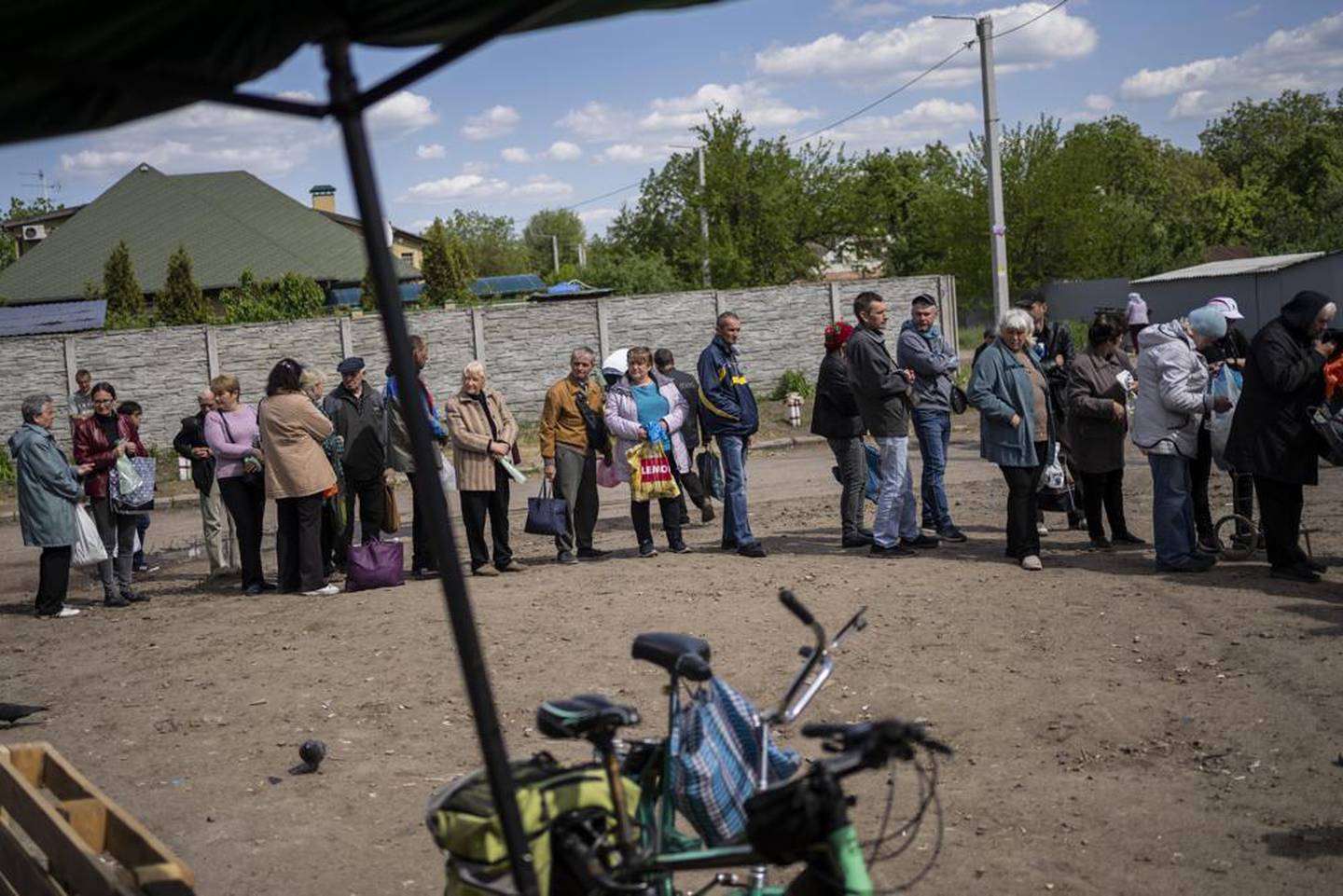 Russia's main investigative body said it intends to interrogate the Mariupol defenders to "identify the nationalists" and determine whether they were involved in crimes against civilians.

Russian authorities have seized upon the far-right origins of one of the regiments there, calling the Azov Regiment's fighters "Nazis" and accusing their commander without evidence of "numerous atrocities". Russia's top prosecutor has asked the country's Supreme Court to designate the Azov Regiment a terrorist organisation.

Family members of the fighters have pleaded for their eventual return to Ukraine as part of a prisoner swap.

Elsewhere, Boris Bondarev, a veteran Russian diplomat at the UN office at Geneva, quit and sent a letter denouncing the "aggressive war unleashed" by Russian President Vladimir Putin. Bondarev told AP: "It is intolerable what my government is doing now."

In his letter, Bondarev said those who conceived the war "want only one thing — to remain in power forever, live in pompous tasteless palaces, sail on yachts comparable in tonnage and cost to the entire Russian Navy, enjoying unlimited power and complete impunity".

He also said Russia's Ministry of Foreign Affairs is all about "warmongering, lies and hatred". 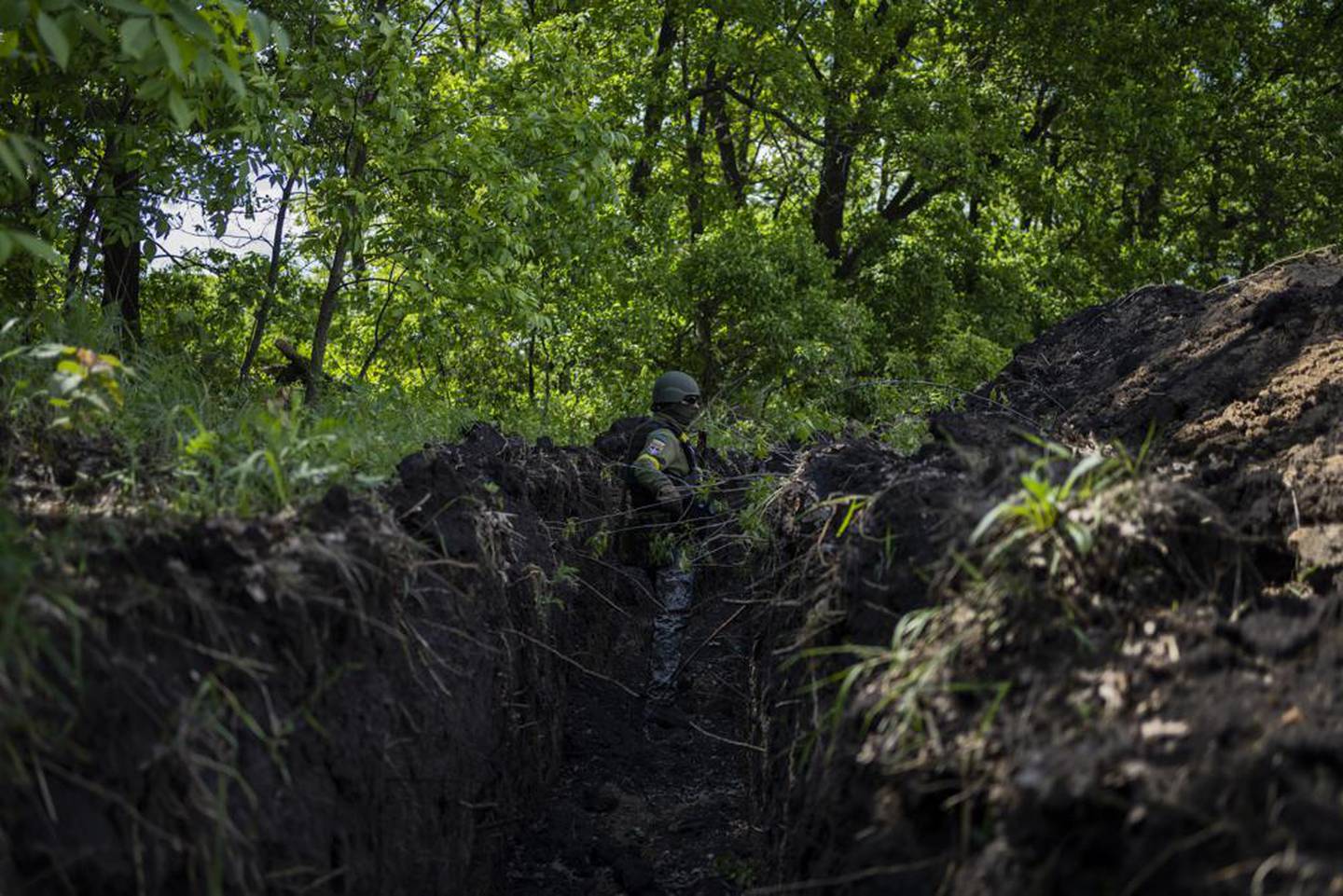 At the Davos forum, Zelenskyy said sanctions against the Kremlin must go further. He urged an embargo on Russian oil, a complete cutoff of trade and a withdrawal of foreign companies from the country.

"This is what sanctions should be: They should be maximum, so that Russia and every other potential aggressor that wants to wage a brutal war against its neighbour would clearly know the immediate consequences of their actions," said Zelenskyy, who received a standing ovation.

In other developments, nearly 50 defence leaders from around the world met Monday and agreed to send more advanced weapons to Ukraine, including missiles to protect its coast, US Defense Secretary Lloyd Austin told reporters in Washington.

On the battlefield, Russian forces increased their bombardment of the Donbas, the eastern industrial heartland of coal mines and factories that Russia is bent on capturing.

He said the Russians were decimating cities in their attempt to take them over. Only about 320,000 people out of the region's prewar population of 1.6 million remain, and Russian forces are targeting evacuation efforts, he said.

On the eve of the three-month anniversary of the start of the war, Zelensky said four missiles killed 87 people last week in the town of Desna, 55km north of Kyiv. 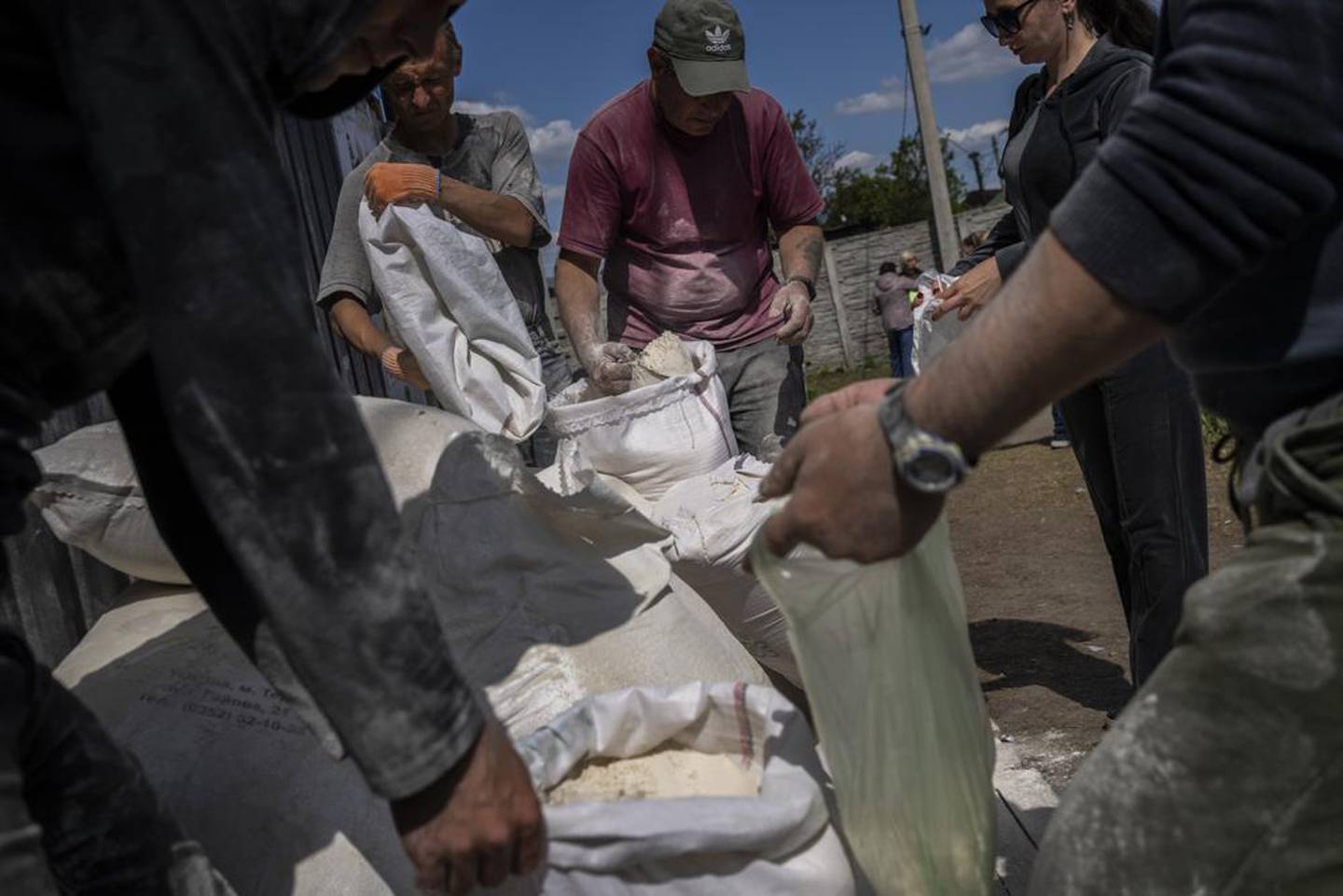 The Russians have now concentrated their forces on Donbas cities and "are trying to destroy all life," Zelenskyy said in his evening address to the nation.

In the Luhansk region, UN spokesman Stephane Dujarric said, local authorities reported that a bridge leading to the administrative center of Sievierodonetsk was destroyed, leaving the partially encircled city reachable by just one road.

Some who fled the Donetsk region shared their suffering.

"We haven't been able to see the sun for three months. We are almost blind because we were in darkness for three months," said Rayisa Rybalko, who hid with her family first in their basement and then in a bomb shelter at a school before fleeing their village of Novomykhailivka. "The world should have seen that."

Her son-in-law Dmytro Khaliapin said heavy artillery pounded the village. "Houses are being ruined. It's a horror."