Moscow-backed separatists pounded eastern Ukraine's industrial Donbas region Friday (local time), claiming the capture of a railway hub as concerns grew that besieged cities in the region would undergo the same horrors experienced by the people of Mariupol in the weeks leading up to the port's capture.

Authorities say 1,500 people have died in Donbas since the war began scarcely more than three months ago. Characterising the battle as grave, Ukrainian officials renewed their appeals for more sophisticated Western-supplied weaponry. Without it, they said, Ukrainian forces wouldn't be able to stop Russia's offensive.

The latest fighting focused on two key cities: Sievierodonetsk and nearby Lysychansk. They are the last areas under Ukrainian control in Luhansk, one of two provinces that make up the Donbas and where Russia-backed separatists have already controlled some territory for eight years.

"Massive artillery shelling does not stop, day and night," Sievierodonetsk Mayor Oleksandr Striuk told The Associated Press. "The city is being systematically destroyed — 90 per cent of the buildings in the city are damaged."

Striuk described conditions in Sievierodonetsk reminiscent of the battle for Mariupol, located in the Donbas' other province, Donetsk. Now in ruins, the port was constantly barraged by Russian forces in a nearly three-month siege that ended last week when Russia claimed its capture. More than 20,000 of its civilians are feared dead.

Before the war, Sievierodonetsk was home to around 100,000 people. About 12,000 to 13,000 remain in the city, Striuk said, huddled in shelters and largely cut off from the rest of Ukraine. At least 1,500 people have died because of the war, now in its 93rd day. The figure includes people killed by shelling or in fires caused by Russian missile strikes, as well as those who died from shrapnel wounds, untreated diseases, a lack of medicine or while trapped under rubble, the mayor said. 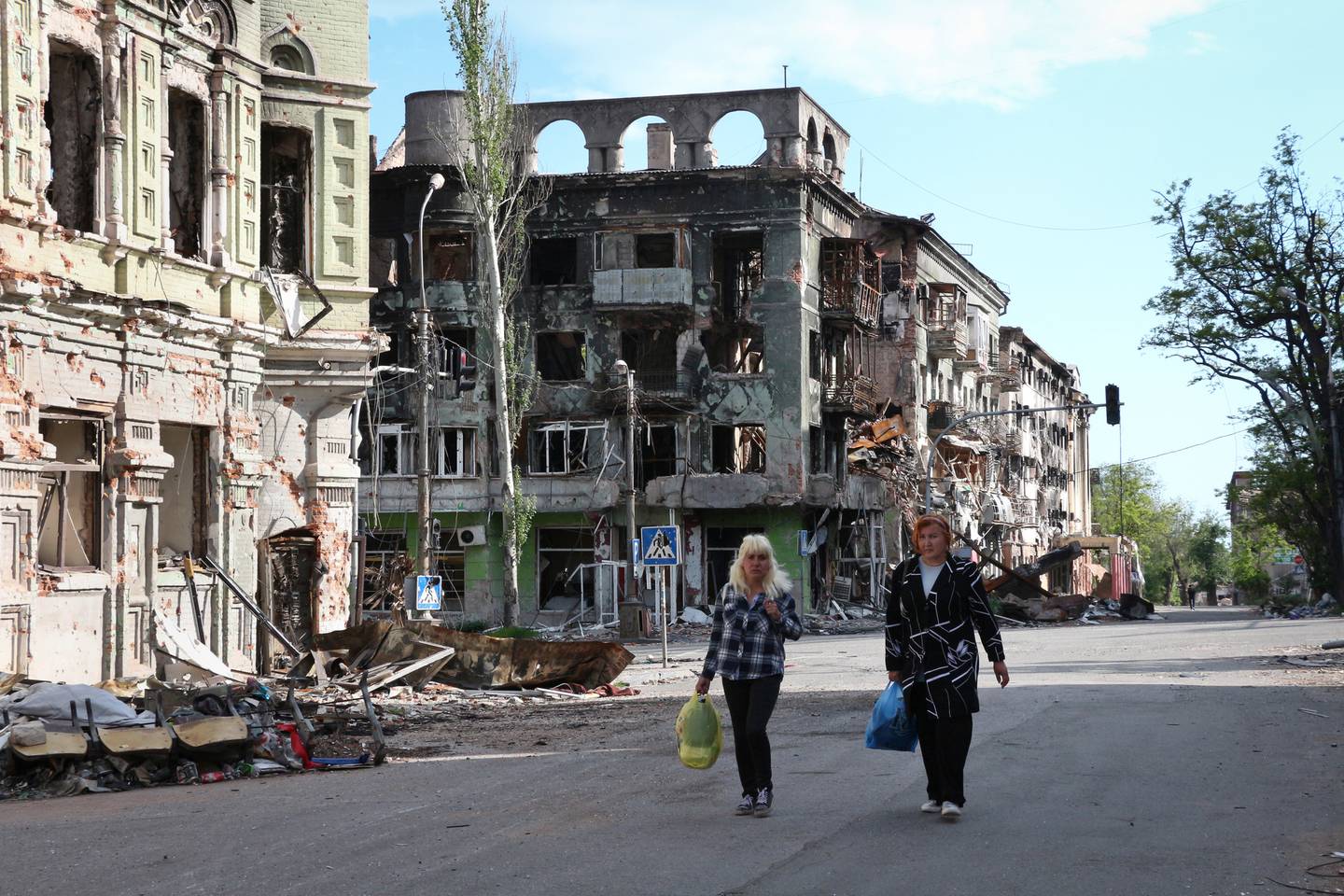 An assault was underway Friday in the city's northeastern quarter, where Russian reconnaissance and sabotage groups tried to capture the Mir Hotel and the area around it, Striuk said.

Hints of Russia's strategy for the Donbas can be found in Mariupol, where Moscow is consolidating its control through measures including state-controlled broadcast programming and overhauled school curricula, according to an analysis from the Institute for the Study of War, a Washington think tank.

"It appears that Russia has once again adjusted its objectives, and fearfully now it seems that they are trying to consolidate and enforce the land that they have rather than focus on expanding it," General Phillip Breedlove, former head of US European Command for Nato said Friday during a panel mounted by the Washington-based Middle East Institute.

But the relentless assault in the Donbas also indicated Russia's desire to expand its dominion there. Ukrainian analysts said Russian forces have taken advantage of delays in Western arms shipments to step up their offensive there.

That aggressive push could backfire, however, by seriously depleting Russia's arsenal. Echoing an assessment from the British Defence Ministry, military analyst Oleh Zhdanov said Russia was deploying 50-year-old T-62 tanks, "which means that the second army of the world has run out of modernised equipment". 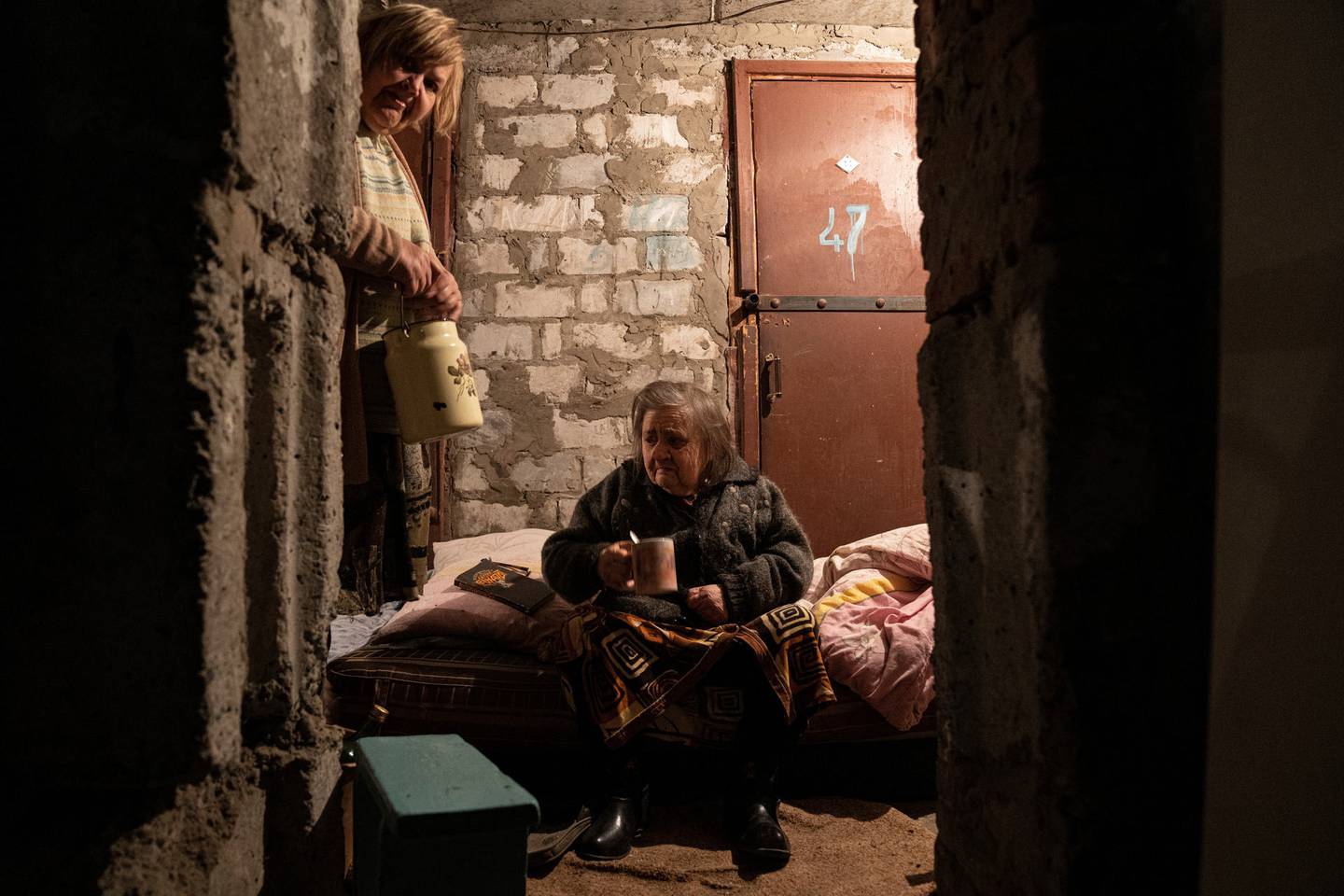 An elderly woman drinks tea at the basement of her house in Lyman, Donetsk region, eastern Ukraine. Photo / AP

As Ukraine's hopes of stopping the Russian advance faded, Foreign Minister Dmytro Kuleba pleaded with Western nations for artillery and rocket-launching systems: "Without artillery, without multiple launch rocket systems we won't be able to push them back," he said.

Just south of Sievierodonetsk, volunteers hoped to evacuate 100 people from a smaller town. It was a painstaking process: Many of the evacuees from Bakhmut were elderly or infirm and needed to be carried out of apartment buildings in soft stretchers and wheelchairs.

Minibuses and vans zipped through the city, picking up dozens for the first leg of a long journey west.

"Bakhmut is a high-risk area right now," said Mark Poppert, an American volunteer working with British charity RefugEase. "We're trying to get as many people out as we can."

In his nightly address to the nation, Ukrainian President Volodymyr Zelenskyy had some harsh words for the European Union, which has not agreed on a sixth round of sanctions that includes an embargo on Russian oil. Hungary, one of Moscow's closest allies in the EU, is obstructing the deal.

Zelenskyy said Russia's offensive in the Donbas could leave its communities in ashes, and he accused Moscow of pursuing "an obvious policy of genocide" through mass deportations and killings of civilians.

On Thursday, Russian shelling of Kharkiv, a northeastern city, killed nine people, including a father and his 5-month-old baby, the president said. AP reporters saw the bodies of at least two dead men and four wounded at a subway station where the victims were taken.

To the north, neighbouring Belarus — used by Russia as a staging ground before the invasion — announced Friday that it was sending troops toward the Ukrainian border.

Some European leaders sought dialogue with Russian President Vladimir Putin about easing the global food crisis, exacerbated by Ukraine's inability to ship millions of tons of grain and other agricultural products.

Italian Premier Mario Draghi said there were no breakthroughs during his Thursday conversation with Putin.

"If you are asking me if there are openings for peace, the answer is no," Draghi told reporters.

Moscow has sought to shift the blame for the food crisis to the West, calling upon its leaders to lift existing sanctions.

Putin told Austrian Chancellor Karl Nehammer on Friday that Ukraine should remove Black Sea mines to allow safe shipping, according to a Kremlin readout of their conversation; Russia and Ukraine have traded blame for the mines near Ukraine's ports.

Nehammer's office said the two leaders also discussed a prisoner exchange and that Putin indicated efforts to arrange one would be "intensified".