Vladimir Putin's new flagship naval vessel has been hit by Ukrainian missiles and burst into flames off the coast of Snake Island, according to officials in Kyiv.

The 409ft (125 metre) Admiral Makarov has reportedly been struck by the same Neptune missiles that sank Russian missile cruiser Moskva in the Black Sea last month, The Sun reported.

However Moscow has said it "does not have such information" that the vessel has been hit.

The Makarov can accommodate up to 200 crew. It is armed with 24 Buk medium-range surface-to-air missiles and eight Kalibr cruise missiles, all in vertical cells, and can escort other vessels and also attack targets on land.

The frigate would be Russia's latest high-profile naval casualty in a troubled campaign, coming after reports that US intelligence helped Ukraine locate and sink the Moskva weeks ago.

It’s seeming more and more likely that the Claims about the Russian Frigate Admiral Makarov being stuck by Ukrainian Anti-Ship Missiles off the Coast of Odessa is True, multiple Rescue Ships and Aircraft are reportedly in the Area with U.S Surveillance Drones keeping eyes on it. pic.twitter.com/JTuAKr1VEd

Anton Gerashchenko, a Ukrainian government Adviser and former Minister, said on Twitter: "Russian ship is on fire. It seems to be one of the newer Russian ones, Admiral Makarov."

Naval tracking sites claimed a Russian rescue boat was dispatched to the last known location of the ship – with unconfirmed local media reports suggesting the vessel was on fire. Ukrainian MP Oleksiy Goncharenko claimed the warship was burning – but had not sunk.

He said on Telegram: "The frigate Admiral Makarov, the Russian Navy's patrol frigate, is on fire.

"Yes, yes, you got that right! The God of the Seas is taking revenge on Ukraine's abusers." In its daily report on Russian losses, Ukraine's defence ministry said another ship had been wiped out – although it's unclear whether it is referring to Admiral Makarov.

According to the Ukrainian government news site Dumskaya, a Burevestnik class frigate was located at midday on Friday local time near Snake Island.

The site said the vessel had been hit by a Neptune missile and that Russian aircraft were circling the warship and rescue ships were being sent from Russian annexed Crimea.

Flight trackers show a number of aircraft – including a US air force drone – circling over the area of the Black Sea.

Open source intelligence monitor OSINTdefender tweeted that it was "seeming more and more likely" that the reports that the vessel had been hit were "true."

"Multiple rescue ships and aircraft are reportedly in the area with US surveillance drones keeping eyes on it," it added.

Putin's Black Sea Fleet was already down to just three major warships after the sinking of Moskva on April 14.

Any losses of the fleet are disastrous for Moscow as the only way to bring in replacement vessels to the Black Sea is through the Bosphorus Strait that bisects Istanbul and is controlled by Turkey. While in peacetime, Turkey generally lets warships of other nations' pass through the waterway, since Russia's invasion it has refused Moscow's requests to allow its naval vessels to enter the strait.

There's evidence Admiral Makarov's skipper had been careful to keep her away from the Ukrainian coast, newspaper Forbes reported.

A Kremlin spokesman denied any knowledge of the alleged missile attack on the Russian frigate. 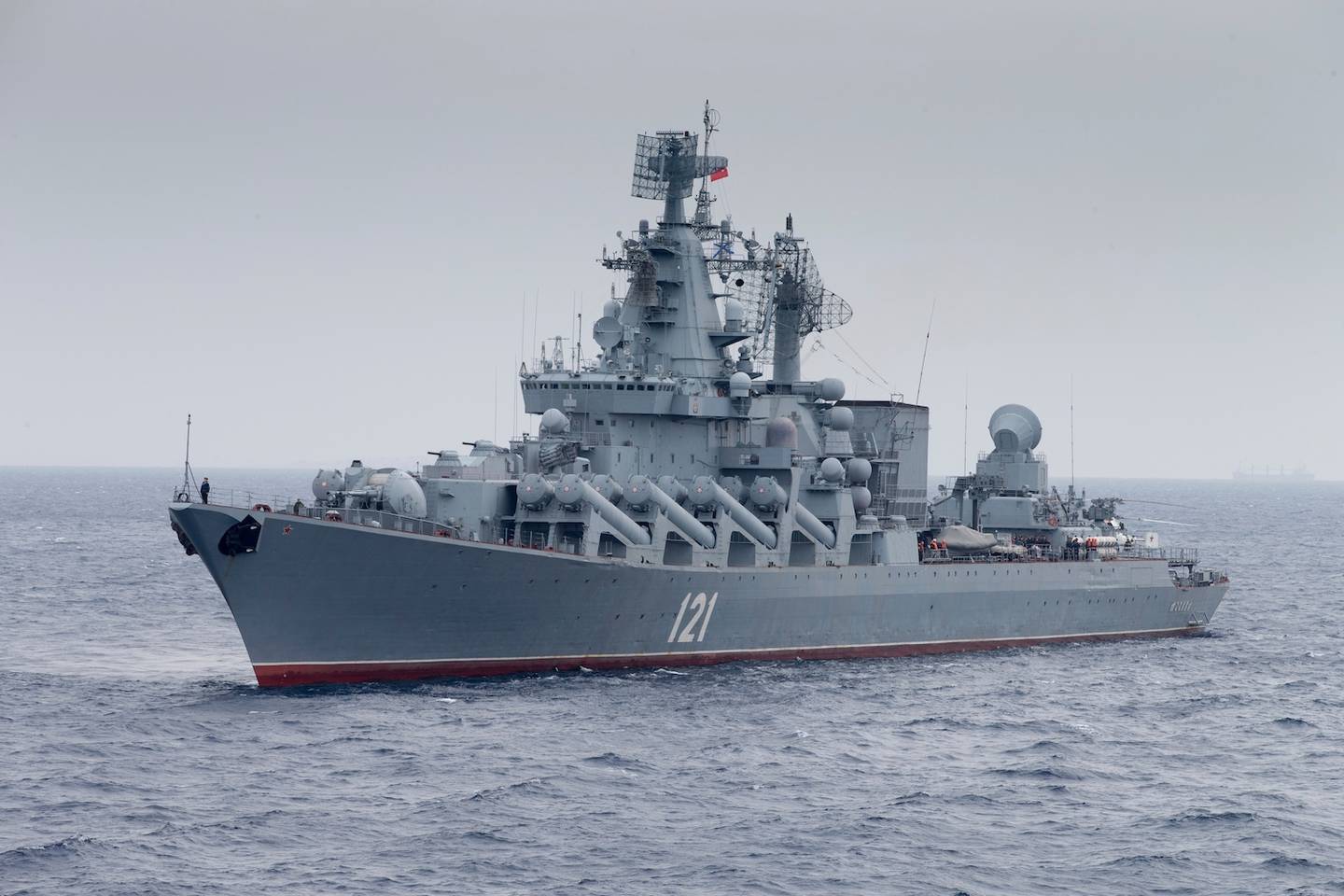 Russian missile cruiser Moskva is on patrol in the Mediterranean Sea near the Syrian coast in 2015. Photo / AP

"No, we do not have such information, " Dmitry Peskov said, according to Russian state-owned news agency TASS.

Last month, the Moskva sank in the Black Sea following a fire and an explosion.

Moscow lost the 12,490 ton missile cruiser after it was hit by a pair of Neptune cruise missiles fired by Ukraine.

Moskva played a deadly role in the war by bombarding towns and cities in Ukraine from positions at sea. It was thought to be a key weapon in any attempt to take the coastal Ukrainian city of Odessa.

Ukraine is said to have tracked the 611ft (186m) vessel with a drone as a distraction before striking the with two cruise missiles. The Russian ministry of defence said explosions ripped through the ammunition stores triggering a major blaze.

It follows reports this week that the US had provided targeting data that helped Kyiv's forces sink the vessel, which was a major public relations coup for Ukraine and a blow for Russia's forces. However, Pentagon spokesman John Kirby said in a statement that the US did not provide information to target the Moskva and was "not involved in the Ukrainians decision to strike the ship."

The Moskva was the largest Russian warship to be sunk in combat since World War II.