Vladimir Putin's war in Ukraine has suffered another setback as his troops were pushed away from Ukraine's second city — but there are fresh warnings from the US that he is unlikely to give up anytime soon.

In his nightly address on Tuesday, Ukraine's President Volodymyr Zelensky said he had "good news" from the northeastern Kharkiv region.

"The occupiers are gradually being pushed away," he said. "I am grateful to all our defenders who are holding the line and demonstrating truly superhuman strength to drive out the army of invaders."

The head of the Kharkiv regional state administration Oleg Synegubov said on social media site Telegram that "fierce battles" were ongoing in the region, and that the city itself was under heavy fire.

"Due to successful offensive operations, our defenders liberated Cherkasy Tyshky, Rusky Tyshky, Rubizhne and Bayrak from the invaders," he said.

"Thus, the enemy was driven even further from Kharkiv, and the occupiers had even less opportunity to fire on the regional centre."

It is another crushing blow for Putin as the latest figures from the Ukrainian Ministry of Defence show Russia has now lost 26,350 troops since it invaded Ukraine on February 24. Despite the headway being made by the Ukrainian resistance, Washington has warned Putin won't stop with the east and is ready for a long war.

Following that bleak prediction, and after President Joe Biden warned that Ukraine would likely run out of funds to keep fighting within days, the US House of Representatives voted Tuesday to send a $40 billion aid package to the country.

The US Senate is expected to rubberstamp the decision by the end of this week or next, a show of rare bipartisan support that would bring total US help to Ukraine to around $54 billion.

"With this aid package, America sends a resounding message to the world of our unwavering determination to stand with the courageous people of Ukraine until victory is won," House Speaker Nancy Pelosi told her Democratic colleagues ahead of the vote.

Despite the apparent headway made, Zelensky urged Ukrainians not to "create an atmosphere of specific moral pressure, when certain victories are expected weekly and even daily", a reflection of the intense pressure being exerted by Russia on its neighbour.

A stark example of that could be seen in the Kharkiv region itself, where Synegubov announced that 44 civilian bodies had been found under the rubble of a destroyed building in the eastern town of Izyum, now under Russian control.

Since trying and failing to capture Kyiv in the first weeks of the invasion in late February, Moscow has moved its focus to the Russian-speaking Donbas region in the east.

But on Tuesday US Director of National Intelligence Avril Haines said the decision to concentrate Russian forces there was "only a temporary shift".

"We assess President Putin is preparing for prolonged conflict in Ukraine during which he still intends to achieve goals beyond the Donbas," Haines said, adding US intelligence thinks he is determined to build a land bridge to a Russian-controlled territory in Moldova.

A path to achieving that goal would be taking the southern city of Odessa, where missile strikes have destroyed buildings, set ablaze a shopping centre and killed one person, as well as interrupting a visit by European Council President Charles Michel on Monday. 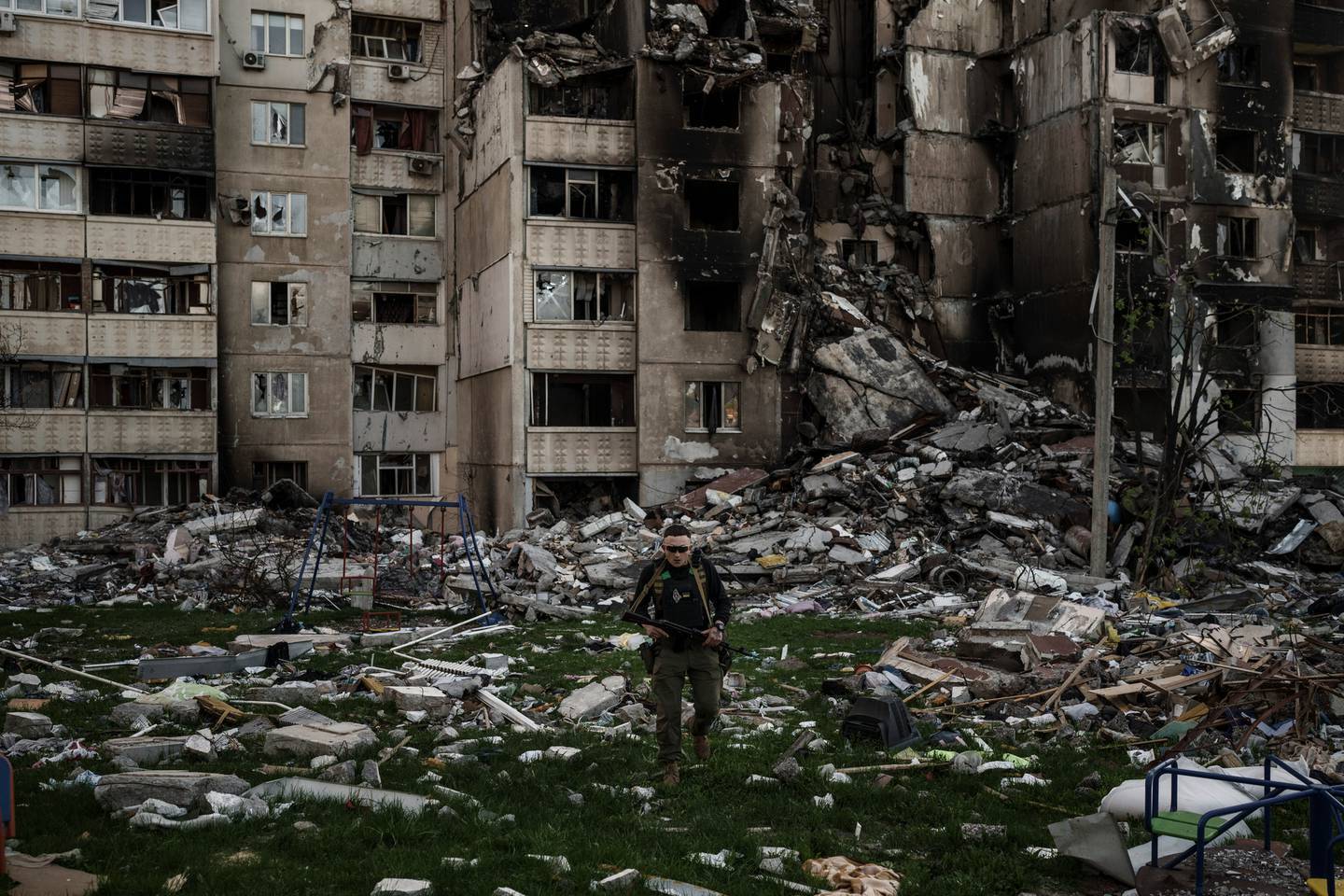 A Ukrainian serviceman walks amid the rubble of a building heavily damaged by multiple Russian bombardments near a frontline in Kharkiv, Ukraine, on April 25. Photo / AP

The plant is the final bastion of resistance in the city, which has seen relentless destruction.

An online petition calling on the United Nations to extract all remaining soldiers garnered more than 1.1 million signatures Tuesday.

Many civilians have been evacuated from the plant in recent days, as Russia pushes for full control of Mariupol to open up another land corridor from Crimea, which it seized in 2014.

But the Ukrainian presidency said the "epicentre of the fighting has moved" to Bilogorivka in the Luhansk region of the Donbas, the site of a deadly Russian air strike on Sunday that Ukrainian officials said killed 60 people.

Shelling also continued in Ukraine's easternmost strongholds, the sister cities of Severodonetsk and Lysychansk, it said.

"The constant shelling by Russian troops does not allow for a full-fledged evacuation of civilians and wounded from the war zone," Ukraine's army said Wednesday.

Civilians are struggling to survive between the constantly shifting front lines. "I feel total apathy. I am morally starved — not to mention physically," said bricklayer Artyom Cherukha, 41, as he collected water trickling from a natural spring in Lysychansk.

He was trying to get supplies for his family of nine, as people in the area steadily lose access to water and food. Despite the scale of the Russian offensive, its current force might not be large or strong enough to capture and hold the territory it aspires to, US intelligence chief Haines said.

The United States views it as increasingly likely that Putin will mobilise his entire country, including ordering martial law, and is counting on his perseverance to wear down Western support for Ukraine.

"He is probably counting on US and EU resolve to weaken as food shortages, inflation and energy prices get worse," Haines said.

Ukraine has been pushing Western countries for more support, and has been particularly critical of Germany for its slow response and unwillingness to give up Russian energy.

The tone changed on Tuesday with German Foreign Minister Annalena Baerbock's surprise visit to Bucha, a town outside Kyiv where Russian troops have been accused of war crimes.

"I would like to thank Germany for changing its position on a number of issues" including arms supplies to Kyiv and supporting a Russian oil embargo, Ukrainian Foreign Minister Dmytro Kuleba told reporters in Kyiv with Baerbock.

Kuleba pushed for the European Union to admit his country.

"Ukraine's membership in the EU is a matter of war and peace in Europe," said Kuleba. "One of the reasons that this war started is that Putin was convinced that Europe doesn't need Ukraine."

Western powers on Tuesday separately accused Russian authorities of carrying out a cyberattack against a satellite network an hour before the February 24 invasion of Ukraine to pave the way for its assault.

The Russian embassy in the United States denied the allegations. "Such statements are absurd and ripped from the real state of affairs," it said on Telegram.

"Our country has never engaged in cyber aggression."