Ukraine's ability to stymie a larger, better-armed Russian military has surprised many who had anticipated a much quicker end to the conflict. With the war now in its 11th week and Kyiv bogging down Russian forces and even staging a counteroffensive, Ukraine's foreign minister appeared to suggest the country could expand its aims beyond merely pushing Russia back to areas it or its allies held on the day of the February 24 invasion.

One of the most dramatic examples of Ukraine's ability to prevent easy victories is in Mariupol, where Ukrainian fighters remained holed up at a steel plant, denying Russia full control of the city. The regiment defending the plant said Russian warplanes continued bombarding it.

In recent days, the United Nations and Red Cross organised a rescue of what some officials said were the last civilians trapped at the plant. But two officials said on Tuesday about 100 were believed to still be in the complex's underground tunnels. Others said that was impossible to confirm.

In another example of the grisly toll the war continues to take, the Ukrainians said they found the bodies of 44 civilians in the rubble of a building destroyed weeks ago in the northeastern city of Izyum. 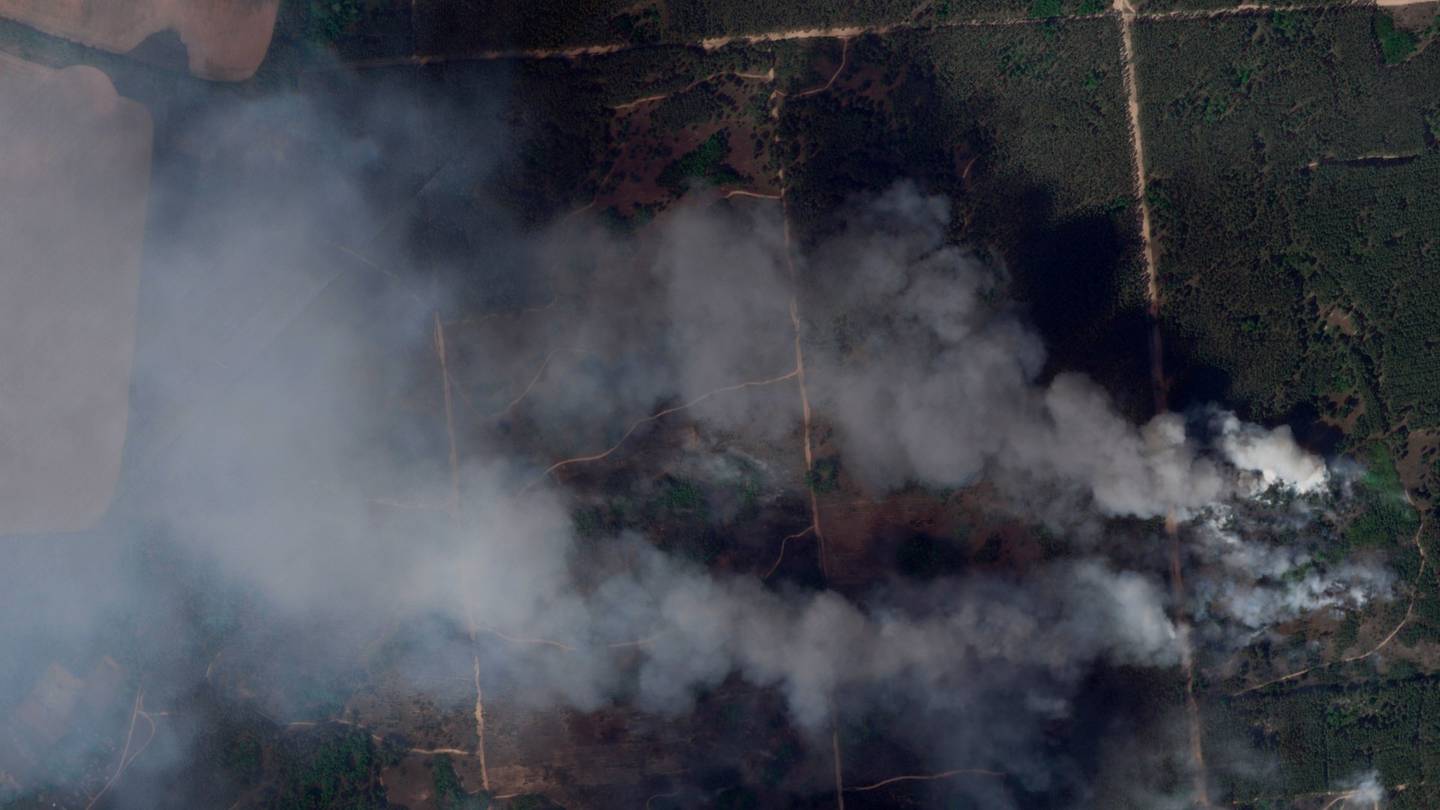 Smoke rising after a suspected artillery strike on the front lines near Izyum, Ukraine. Photo / Planet Labs PBC via AP

In Washington, a top US intelligence official testified Tuesday that eight to 10 Russian generals have been killed so far in the war. Lieutenant General Scott Berrier, who leads the Defence Intelligence Agency, told a Senate committee that because Russia lacks a non-commissioned officer corps, its generals have to go into combat zones and end up in dangerous positions.

Ukraine said Russian forces fired seven missiles at Odesa, hitting a shopping centre and a warehouse in the country's largest port. One person was killed and five wounded, the military said.

Images overnight showed a burning building and debris — including a tennis shoe — in a heap of destruction in the city on the Black Sea. Mayor Gennady Trukhanov later visited the warehouse and said it "had nothing in common with military infrastructure or military objects".

Ukraine alleged at least some of the munitions used dated to the Soviet era, making them unreliable in targeting. But the Centre for Defence Strategies, a Ukrainian think tank, said Moscow used precision weapons against Odesa: Kinzhal, or "Dagger", hypersonic air-to-surface missiles.

Ukrainian, British and US officials say Russia is rapidly using up its stock of precision weapons, raising the risk of more imprecise rockets being used as the conflict grinds on.

Ever since President Vladimir Putin's forces failed to take Kyiv early in the war, his focus shifted to the eastern industrial heartland of the Donbas — but one general has suggested Moscow's aims also include cutting Ukraine's maritime access to the Black and Azov seas.

That would also give it a swath of territory linking Russia to the Crimean Peninsula, which it seized in 2014 and Transnistria, a pro-Moscow region of Moldova.

Even if it falls short of severing Ukraine from the coast — and it appears to lack the forces to do so — continuing missile strikes on Odesa reflect the city's strategic importance. The Russian military has repeatedly targeted its airport and claimed it destroyed several batches of Western weapons.

Odesa is also a major gateway for grain shipments, and its blockade by Russia already threatens global food supplies. Beyond that, the city is a cultural jewel, dear to Ukrainians and Russians alike, and targeting it carries symbolic significance as well. 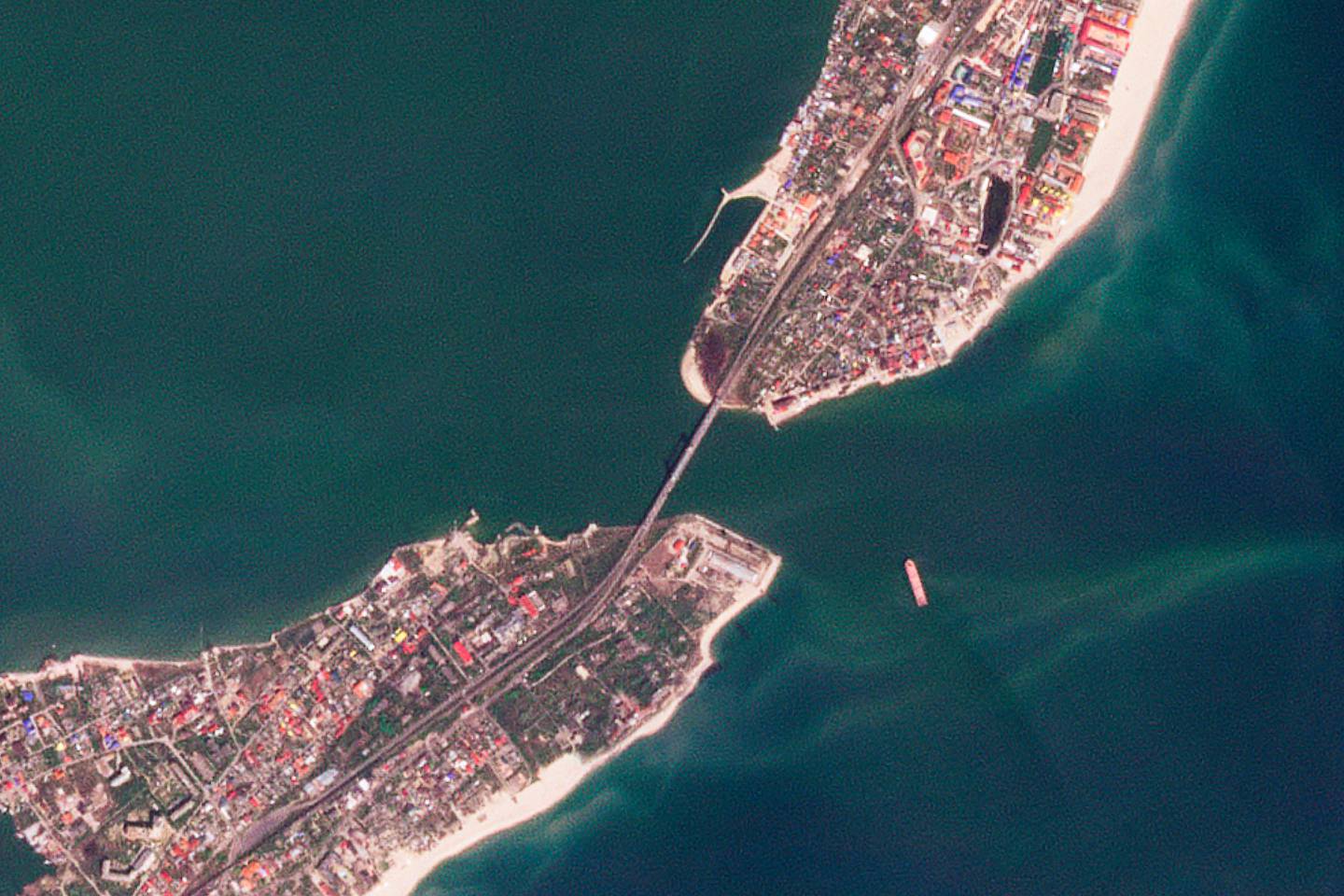 A bridge has been repeatedly targeted by Russian missile strikes outside of Odesa, Ukraine. Photo / Planet Labs PBC via AP

In Mariupol, Russians also bombarded the Azovstal steel mill, the Azov regiment said, targeting the sprawling complex 34 times in the past 24 hours. Attempts to storm the plant also continued, it said.

Meanwhile, Petro Andryushchenko, an adviser to Mariupol's mayor, estimated on social media that at least 100 civilians are trapped in the plant. Donetsk regional governer Pavlo Kyrylenko said those who remain are people "that the Russians have not selected" for evacuation.

The two officials didn't say how they knew civilians were still in the complex — a warren of tunnels and bunkers spread over 11 square kilometres. Sviatoslav Palamar, the deputy commander of the Azov regiment, told the Associated Press that he could not confirm any civilians remained. Mayor Vadym Boichenko also said there was no way to know.

With Russian forces struggling to gain ground in the Donbas, military analysts suggest that hitting Odesa might serve to stoke concern about southwestern Ukraine, thus forcing Kyiv to put more forces there. That would pull them away from the eastern front as Ukraine's military stages counter-offensives near the northeastern city of Kharkiv, aiming to push the Russians back across the border there.

Kharkiv and the surrounding area have been under sustained Russian attack since early in the war. In recent weeks, grisly pictures testified to the horrors of those battles, with charred and mangled bodies strewn in one street.

Dozens of bodies were found in a five-storey building that collapsed in March in Izyum, about 120km from Kharkiv, said Oleh Synehubov, the head of the regional administration.

"In the first months of the war, the victory for us looked like withdrawal of Russian forces to the positions they occupied before February 24 and payment for inflicted damage," Dmytro Kuleba said in an interview with the Financial Times. "Now if we are strong enough on the military front and we win the battle for Donbas, which will be crucial for the following dynamics of the war, of course, the victory for us in this war will be the liberation of the rest of our territories." 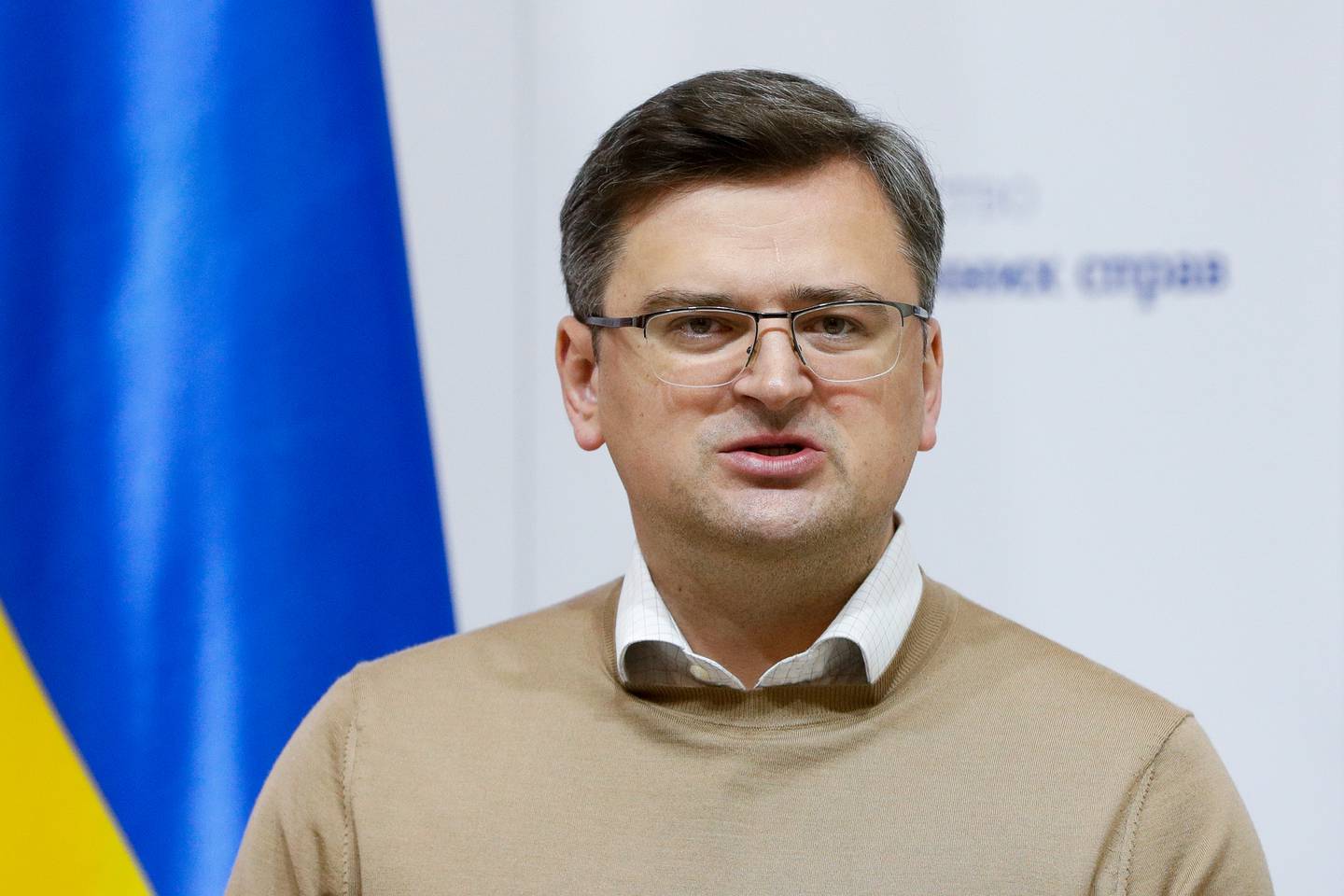 That appears to indicate that Ukraine wants to try to retake Crimea as well as regions of the Donbas taken by Russia and the separatists it backs.

But the comments seemed to reflect political ambitions more than battlefield realities: Many analysts acknowledge that while Russia isn't capable of making quick gains, the Ukrainian military isn't strong enough to drive the Russians back.

Ukraine's natural gas pipeline operator said it would stop Russian shipments through its Novopskov routing hub, which is in a part of eastern Ukraine controlled by Moscow-backed separatists and which handles about a third of the Russian gas that passes through the country to Western Europe.

It said it will stop the flow starting Wednesday because of interference from "occupying forces" including the apparent siphoning of gas, which it said endangered the pipeline network's stability. It said Russia could reroute affected shipments through Ukraine's other main hub, Sudzha, which is in a northern part of the country controlled by Ukraine.

A significant amount of Russian gas still flows through Ukraine to Western Europe, and it wasn't immediately clear how the shutdown might affect long-term supplies. Benchmark natural gas prices in Europe jumped by as much as 8 per cent after the announcement before dropping to a 4 per cent increase.

Simone Tagliapietra, an energy expert at the Brussels-based think tank Bruegel, said that the shutdown "illustrates the obvious risks of running energy infrastructures" in wartime. He added that it might not have a big impact on Europe's supply because "the Ukrainians will be able to divert volumes through another pipeline, which has spare capacity and the transit to Europe will not be affected".

Russian military actions led to the interruption of gas transit through an infrastructure that in 2021 transited 1/3 of gas via Ukraine. Transit to Europe not affected as volumes are diverted to another pipeline located in an area controlled by Ukraine.https://t.co/AYeu3zWkQL

Sergei Kupriyanov, a spokesman for Russia's state-controlled natural gas giant Gazprom, said however that Ukraine's request to route shipments through another hub would be "technologically impossible". He said the company sees no grounds for Ukraine's decision.

Western powers continued to rally around Ukraine's embattled government. German Foreign Minister Annalena Baerbock traveled to the Kyiv suburb of Bucha, where the bodies of civilians — some bound, burned, or shot at close range — were found after Russian forces withdrew.

"We owe it to the victims that we don't just commemorate them here but that we hold the perpetrators to account," she said.